THE world’s rarest leopard has been caught on camera feeding in the wild for the first time in astonishing never before seen photos.

The rare strawberry leopard was snapped by a motion-triggered camera pinned to a tree in Thaba Tholo Wilderness Reserve, South Africa. 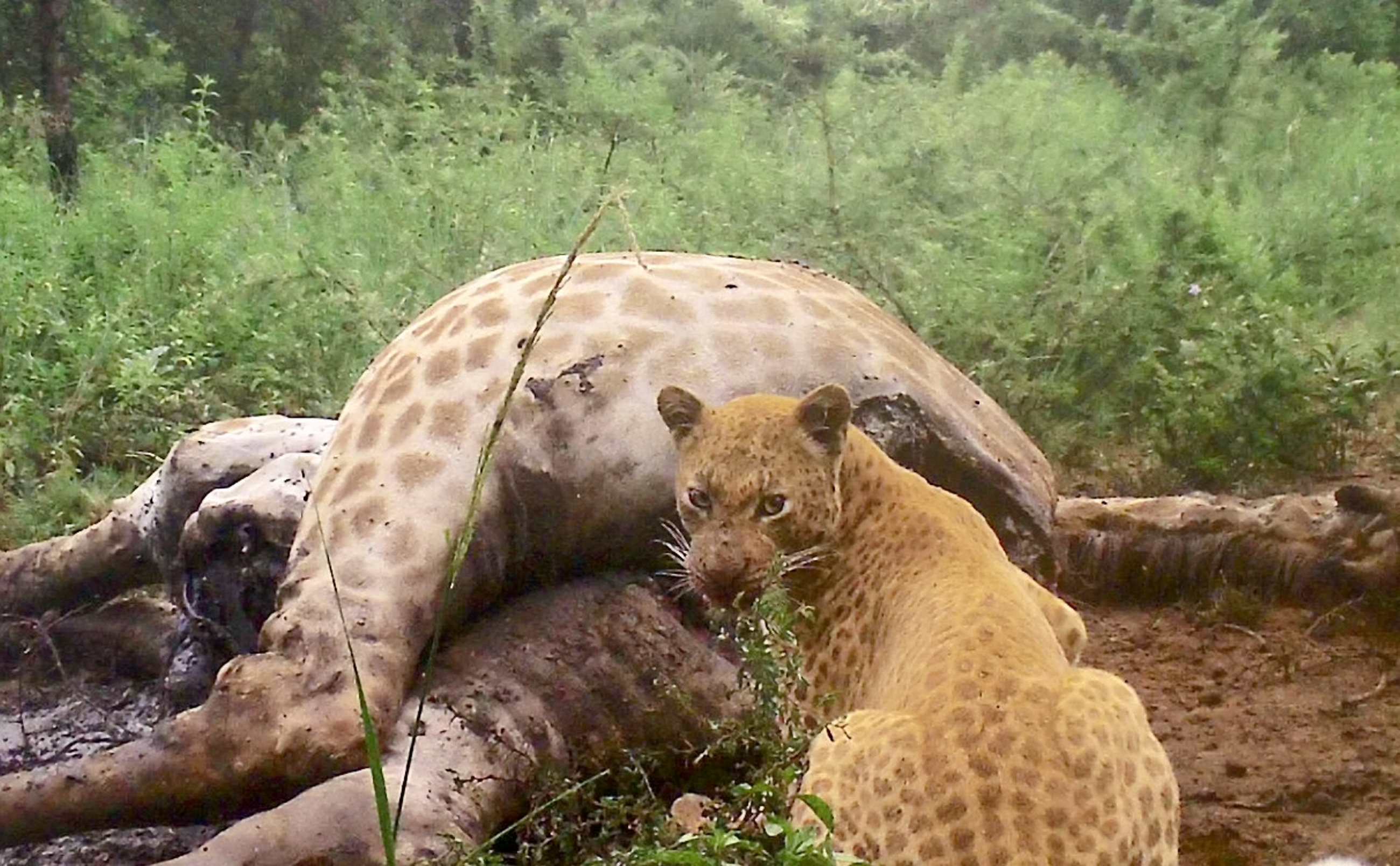 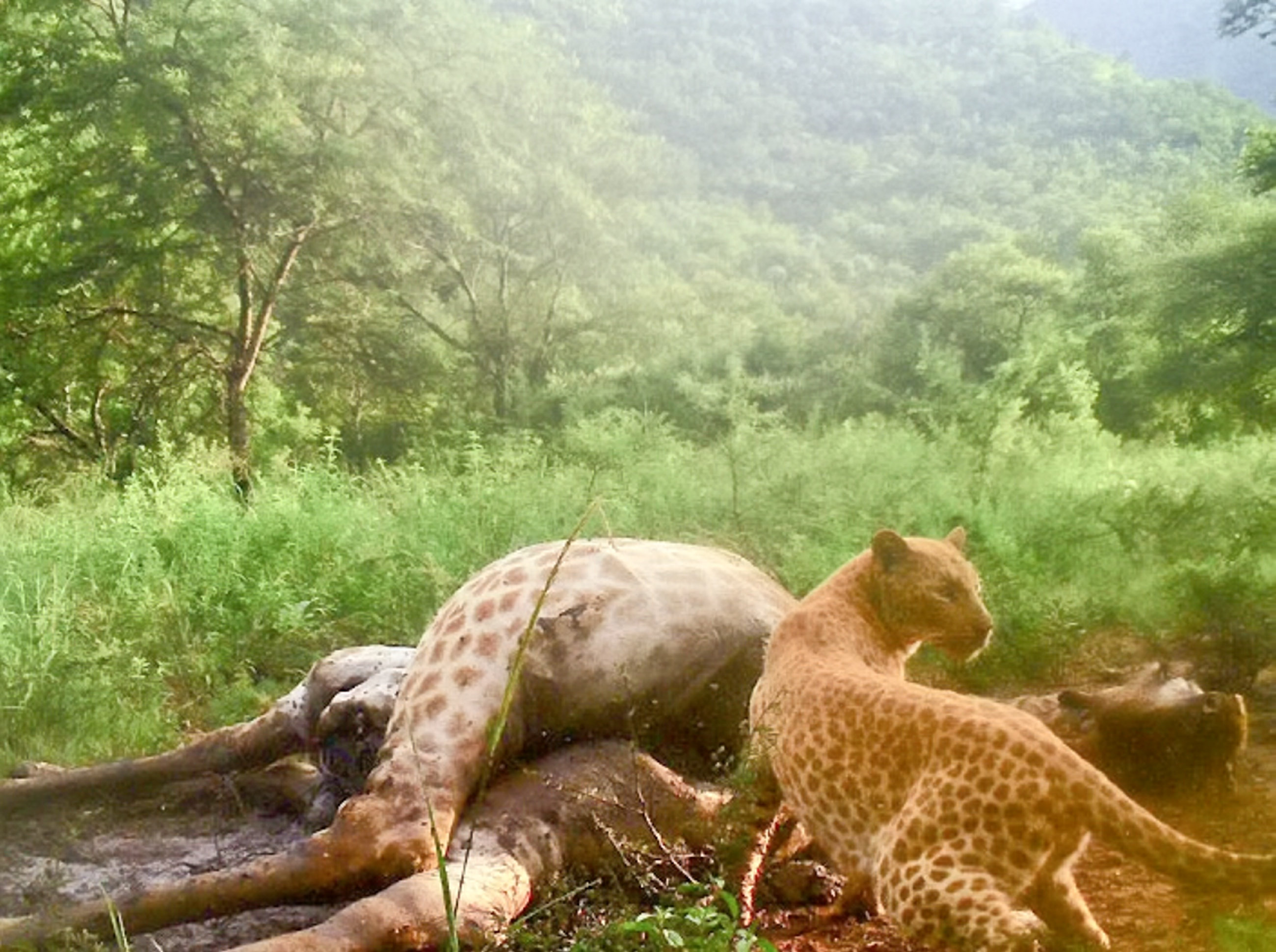 Reserve owner Alan Watson, 45, and his Irish wife Lynsey, 41, had seen the elusive pink hued species skulking around the reserve but had never been able to catch it on film.

But the pair snapped the beast feasting on a dead giraffe near their lodge in the first ever set of photos of the animal up close and eating.

Alan and Lynsey, from Belfast, got the pics after they set up a camera next to a giraffe killed in an intense thunderstorm.

Suspecting they might get "a few hundred photos of grass moving", Alan was astonished when a researcher reviewing the pics spotted the strawberry leopard.

Alan, owner of Black Leopard Mountain Lodge, has nicknamed the leopard "Goldie" and said he's hopeful more of the rare species will be born in years to come.

The stunning big cat – also called the Golden Leopard – was only officially discovered for the first time in 2012, in a different location, close to the Botswana border.

Dad-of-three Alan said: "As far as I know, this is the rarest colour of leopard in the world.

"We hope she will bring new people to the lodge.

"A lot of people who come to spot wildlife in the area go away disappointed not to have seen a leopard.

"They are so well camouflaged and incredibly elusive. Even these ones, if they were going through the long grass you wouldn't see them.

"If she doesn't want to be seen, you aren't going to see her.

"It's so nice to discover something new in nature.

"So much of the time you hear about species being extinct, and here we are with something new. It's incredible." 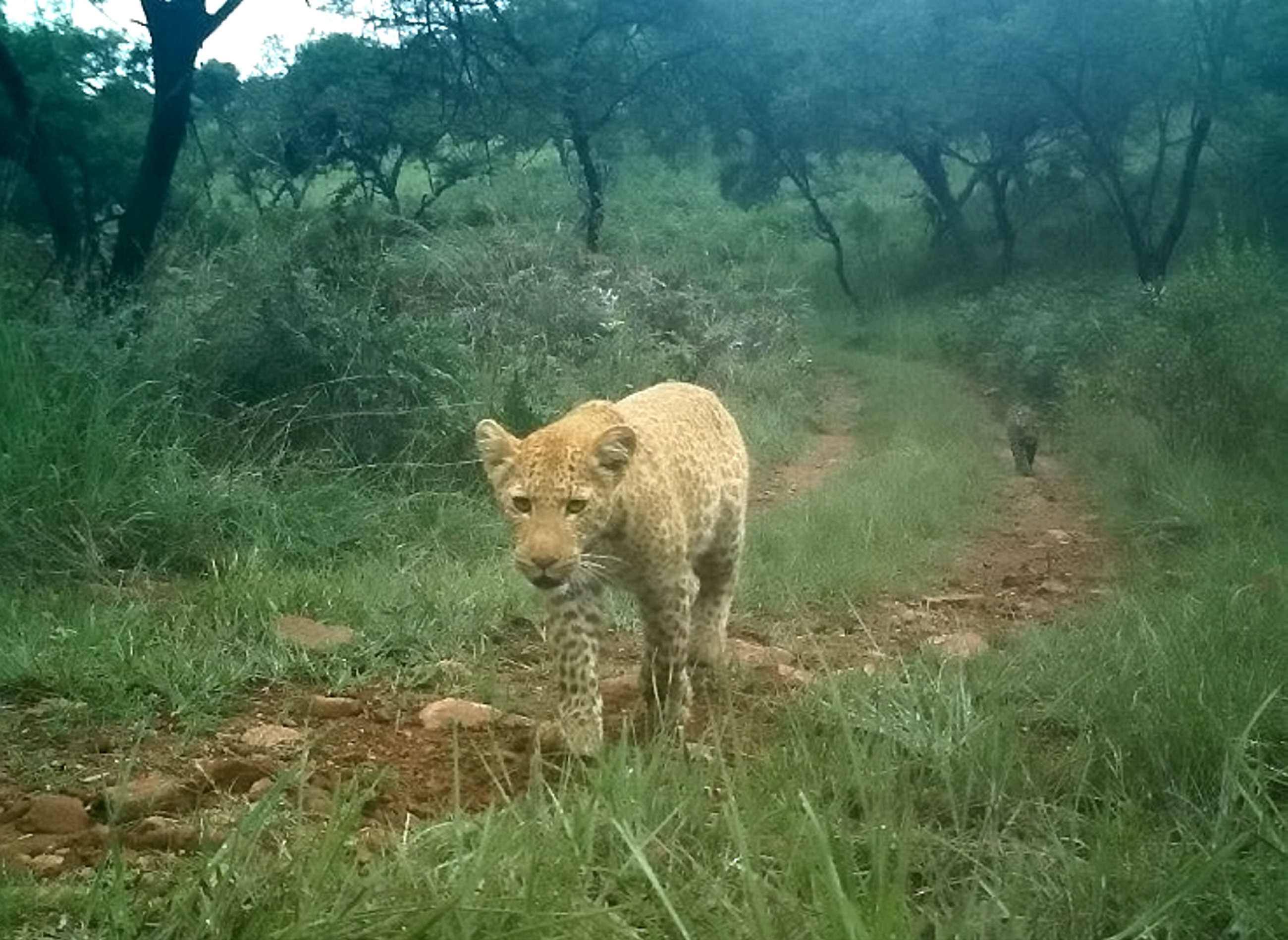 Alan started a research programme at his 6,000ha reserve around ten years ago, studying how mostly black leopards survive outside of protected areas.

The area is perfect for wildlife because the mountainous terrain puts off poachers and animal farmers, while the surrounding citrus groves provide perfect safe corridors.

Four years ago Alan caught Goldie – then a cub – on camera with her mum Pippa, but kept quiet, fearing she might not survive into adolescence.

He said locals started talking about an oddly coloured "lioness" in the area – not home to any lions – and Alan wondered if it might be the now-adult strawberry leopard.

Returning home during a thunder storm in late July, he came across a dead pregnant giraffe, suspected to have died from a heart attack.

After checking there was nothing they could do, they cut her open to encourage predators who would usually be too small to feast on giraffes.

They set up a motion camera, nailed to a tree, and returned to collest the memory card a month later.

Strawberry leopards – the rarest in the world

This results in their distinctive orangey-pink tinge.

The first strawberry leopard was spotted in the wild and photographed in 2012 in South Africa's Madikwe Game Reserve – more than 500km from the recent sighting.

Alan said: "We thought we might get too photos of blades of grass.

"But I was in the bar and this very shocked, pale, researcher who was going through the photos came and said 'you need to look at this'.

"There she was, this golden leopard feeding from 7am to 9am. It was pretty cool.

"In one, she has turned around and snarled at the camera. You can see her nose wrinkled up. It's quite amazing. 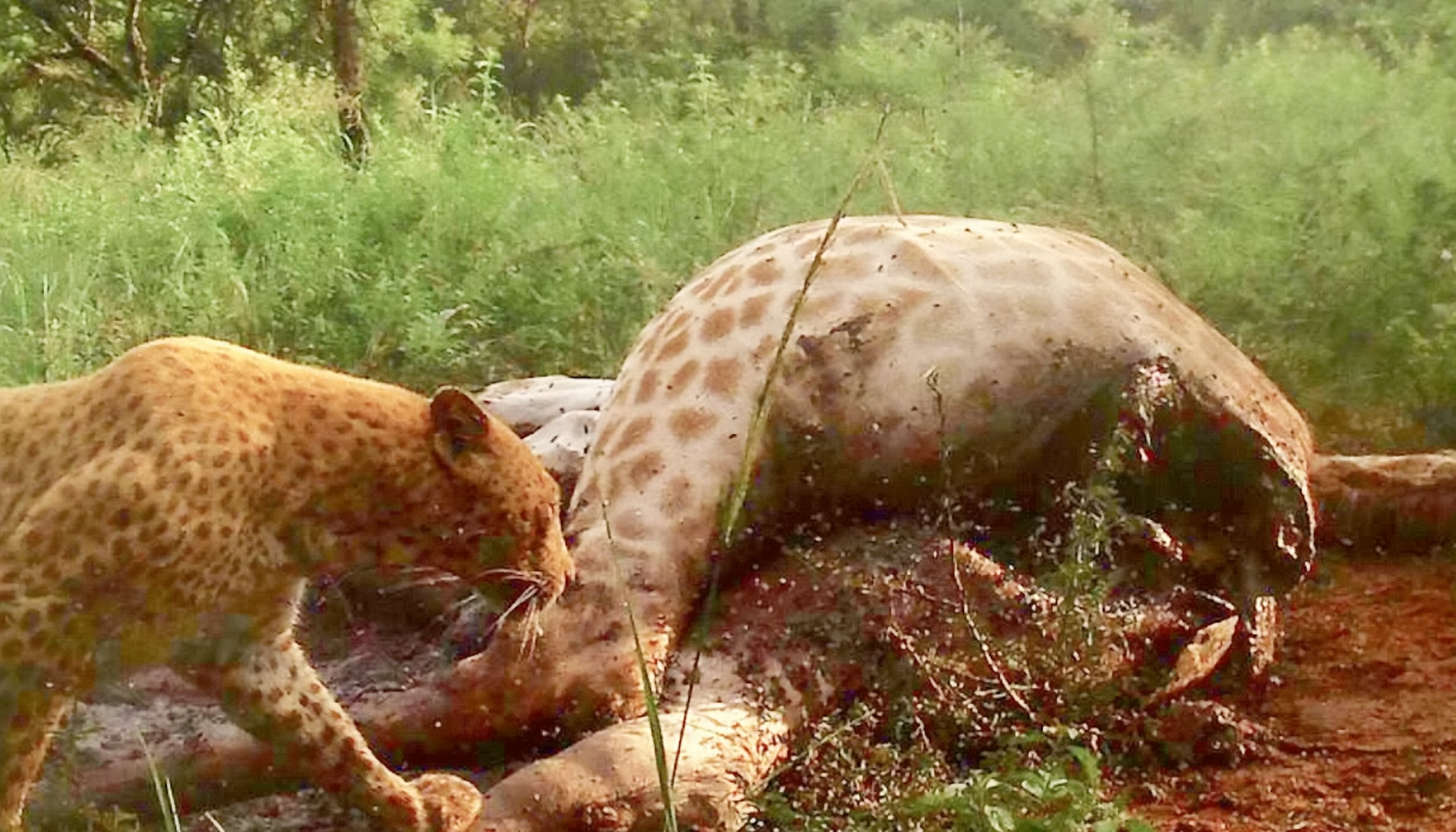 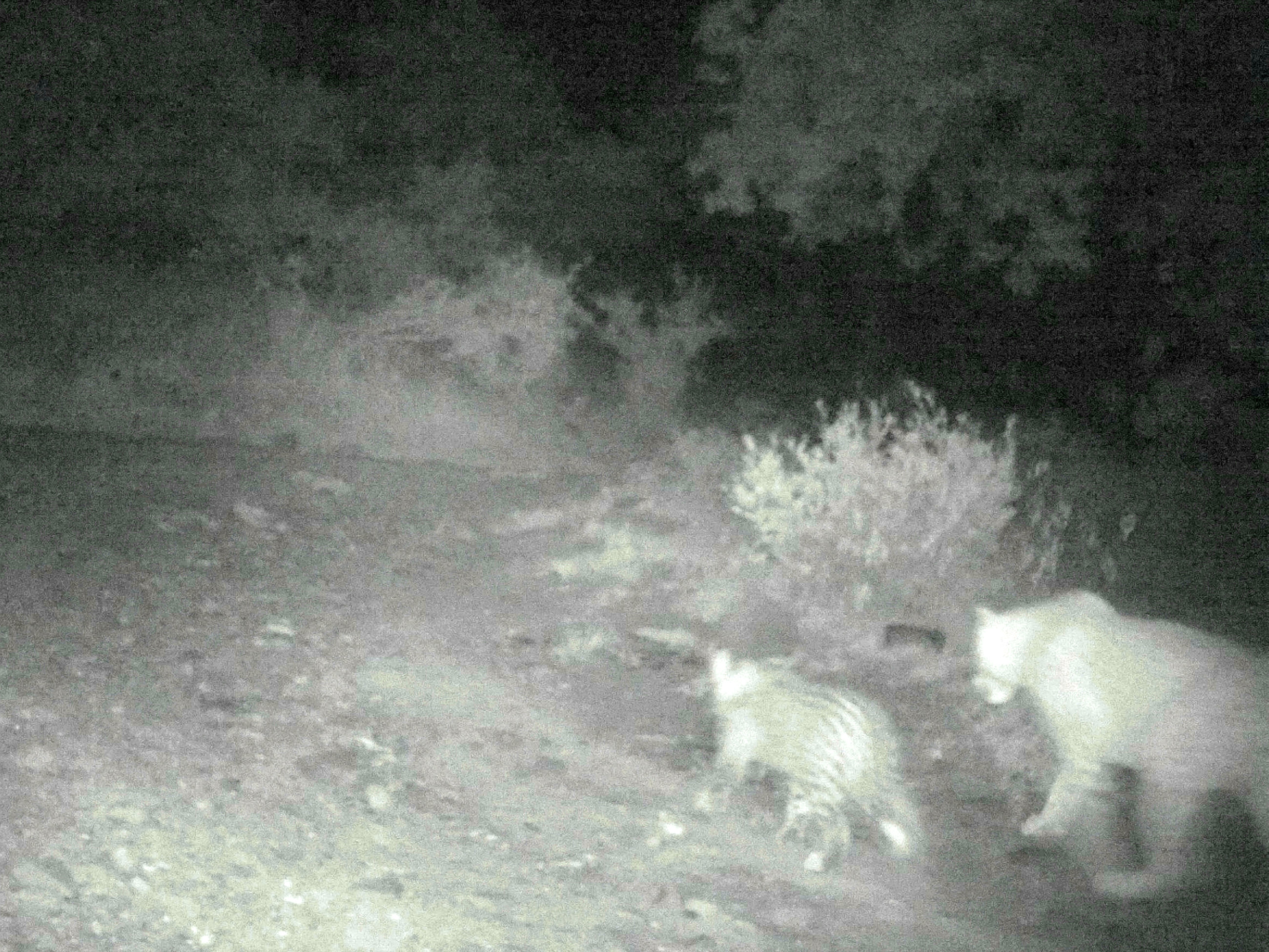 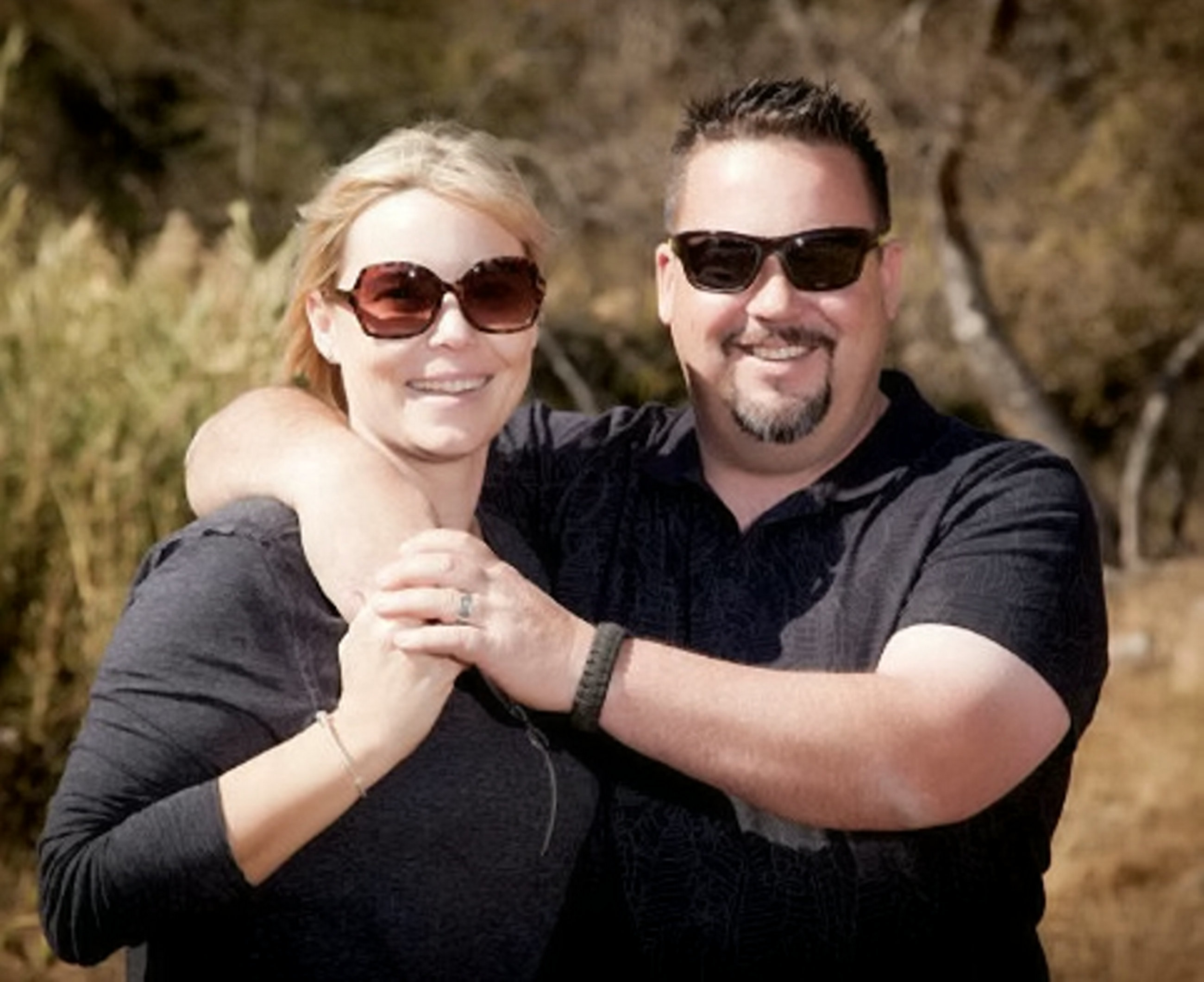