The world’s oldest man has celebrated his 113th birthday in Venezuela and has thanked drinking a glass of sugarcane hooch everyday as the reason for his long life.

Juan Vicente Mora reached the milestone on Friday, May 27, less than two weeks after he was officially declared the oldest male in the world by Guinness World Records.

He said he starts every day with a cup of coffee, while also drinking a glass of aguardiente, which is a liquor made from sugarcane. 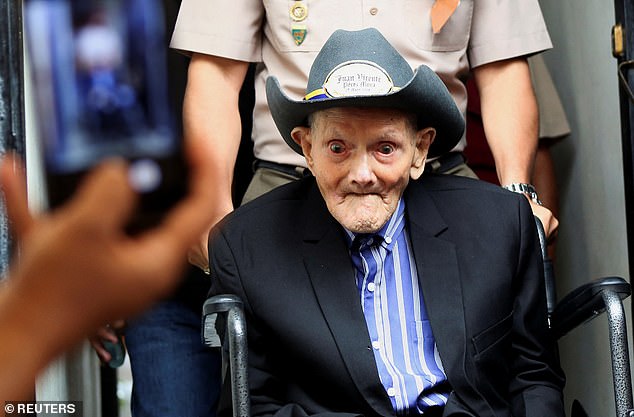 Juan Vicente Mora, pictured here on his 113th birthday with members of the Bolivarian National Guard, is the oldest man in the world 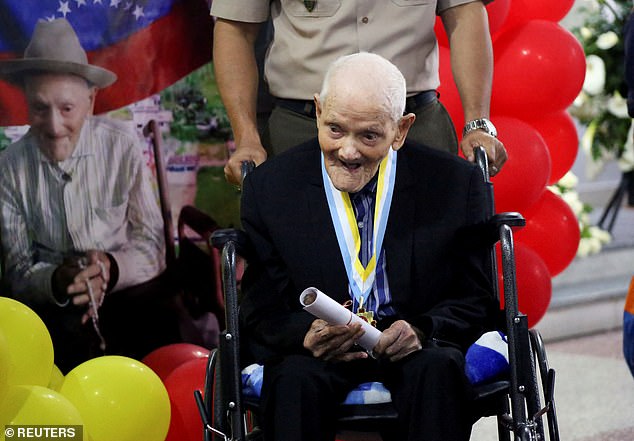 He was officially declared the oldest living man on May 17. Mora credits his long life to drinking sugarcane hooch everyday

The booze – which translates into English as firewater – has a minimum of 29 per cent alcohol and some brews go up to 60 per cent.

Mora, who is the first known male supercentenarian from Venezuela, gave the advice to ‘work hard, rest on holidays, go to bed early, drink a glass of aguardiente every day, love God and always carry him in your heart’.

The 113-year-old is completely ‘lucid’, according to a family friend, with doctors saying his only health problems are slightly elevated blood pressure and hearing problems due to his age. 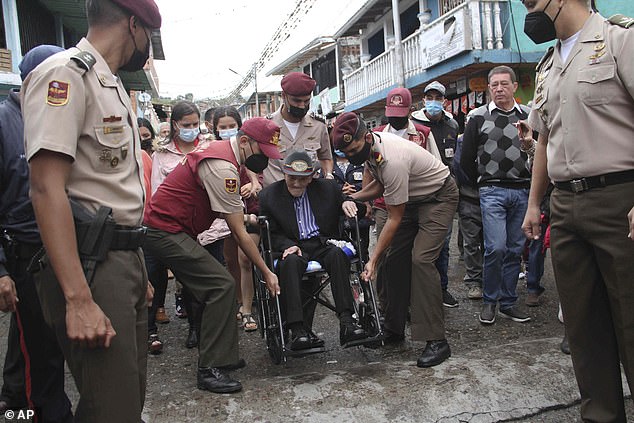 He does not take medication, with local physician Henrique Bujan saying: ‘He seems totally fine to me.’

His daughter Nelida Perez said: ‘The most beautiful thing is to see him full of health every day.

‘He does not have any disease that requires medical attention, or medicine or anything.’

He moved with his family to the village of Los Pajuiles in San Jose de Bolivar in 1914.

He only attended school for five months but fortunately learnt the basics of reading and writing thanks to a notebook given to him by his teacher.

Hailing from a family of farmers who planted coffee and sugar cane, he enjoyed a long, successful career as a farmer himself and sold his last remaining plot of land aged 104.

Alongside his career in agriculture, he started working as a sheriff aged 34 and would solve land or personal disputes within the community. 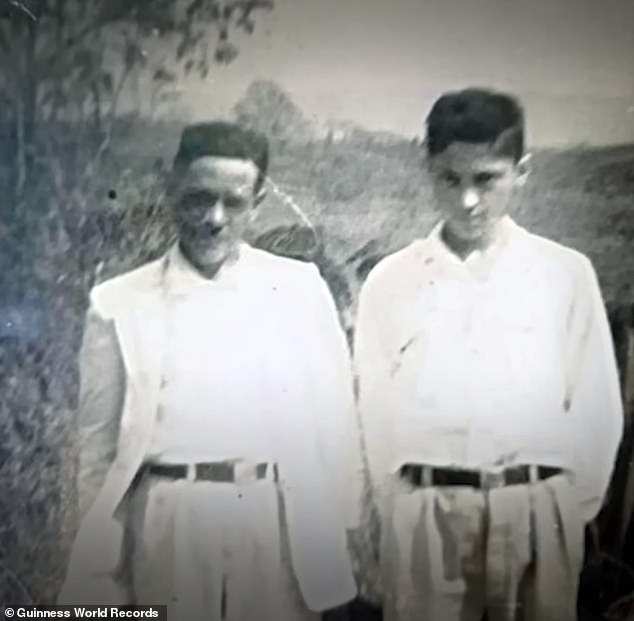 Mora, photographed on the left in 1951, was married his wife for 60 years before she passed away in 1997 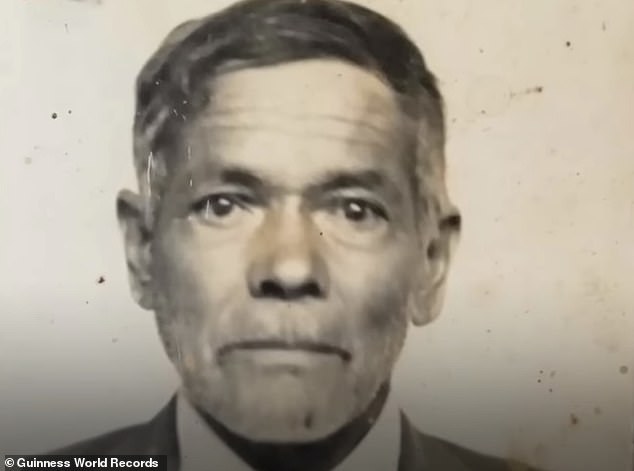 In his road to becoming the world’s oldest man, Mora sadly outlived his wife Ediofina del Rosario Garcia, with the pair marrying in 1937 after meeting at weekly Catholic mass.

They went onto have 11 children together before she died in 1997 – a year he says was one of the hardest in his life.

Mora officially took over the title being the world’s oldest man on May 17, although he became the oldest when previous holder, Saturnino de la Fuente Garcia from Spain, died in January.

Despite his advanced age, he still has some way to go before becoming the oldest ever man.

That title belongs to Jiroemon Kimura, a Japanese man who reached the age of 116 years and 54 days, living through the entire 20th Century in the process. 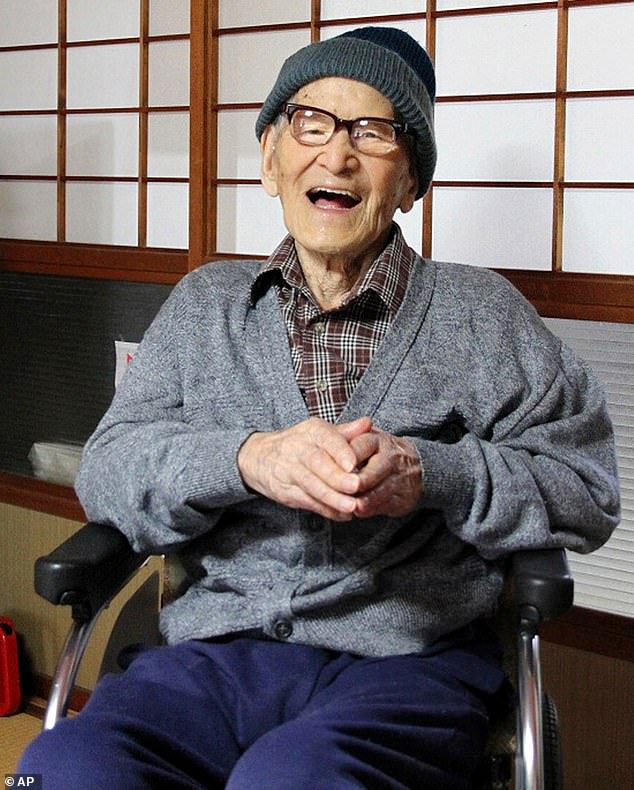 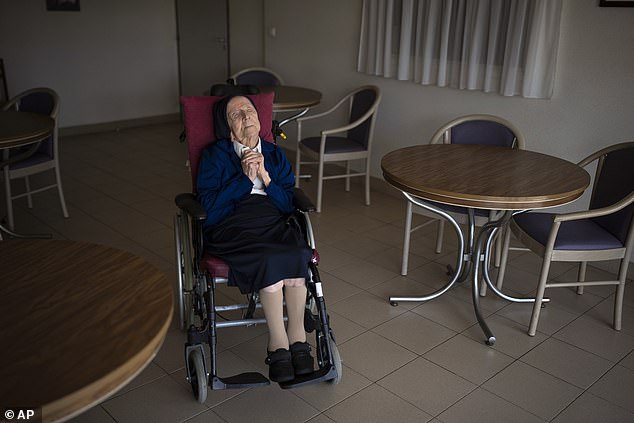 Lucile Randon, pictured, is thought to be the world’s oldest living person at the age of 118 years and 106 days

The oldest living person is though to be French nun Lucile Randon, who is 118 years and 106 days old, while the oldest person ever is thought to be Jeanne Calment, who lived to the age of 122 years and 164 days.

Recently officials in Brazil claimed to have found a 121-year-old woman living in a village in the municipality of Bom Jesus da Lapa.

To confirm Gomes dos Reis’ spot on the list, she or her family would be required to pay 4,000 Brazilian reais, around $800, and provide legal documents proving her age to Guinness.