Ten million subscribers had pre-registered ahead of the launch. The technology offers data speeds 100 times faster than 4G.

Carriers China Mobile, China Telecom and China Unicom began offering 5G in 50 cities, with plan prices tied to speed for the first time, as well as data. China Unicom customers are being offered a top speed of 1Gbps for $US45 ($65) a month. 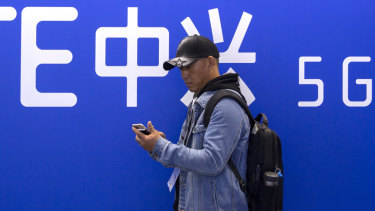 A man uses his smartphone near a display for 5G services from Chinese technology firm ZTE. China officially launched its 5G network on Thursday.Credit:AP

The cheapest package, based on data volume, offers 30 Gigabytes of data for $US18 a month.

Chinese company Huawei, which provides much of China's 5G equipment, is facing US restrictions and uncertainty over whether critical components such as US microchips will continue to be supplied amid a technology race and trade war between the US and China.

South Korea was the first country to launch 5G commercial services. Australia has barred Huawei from participating in its 5G rollout.