BERLIN (Reuters) – Pitching to succeed Angela Merkel as Christian Democrat (CDU) leader, Annegret Kramp-Karrenbauer promised on Wednesday a new chapter for Germany in which “people feel at home here” after a period of political turmoil marked by the rise of the far right. 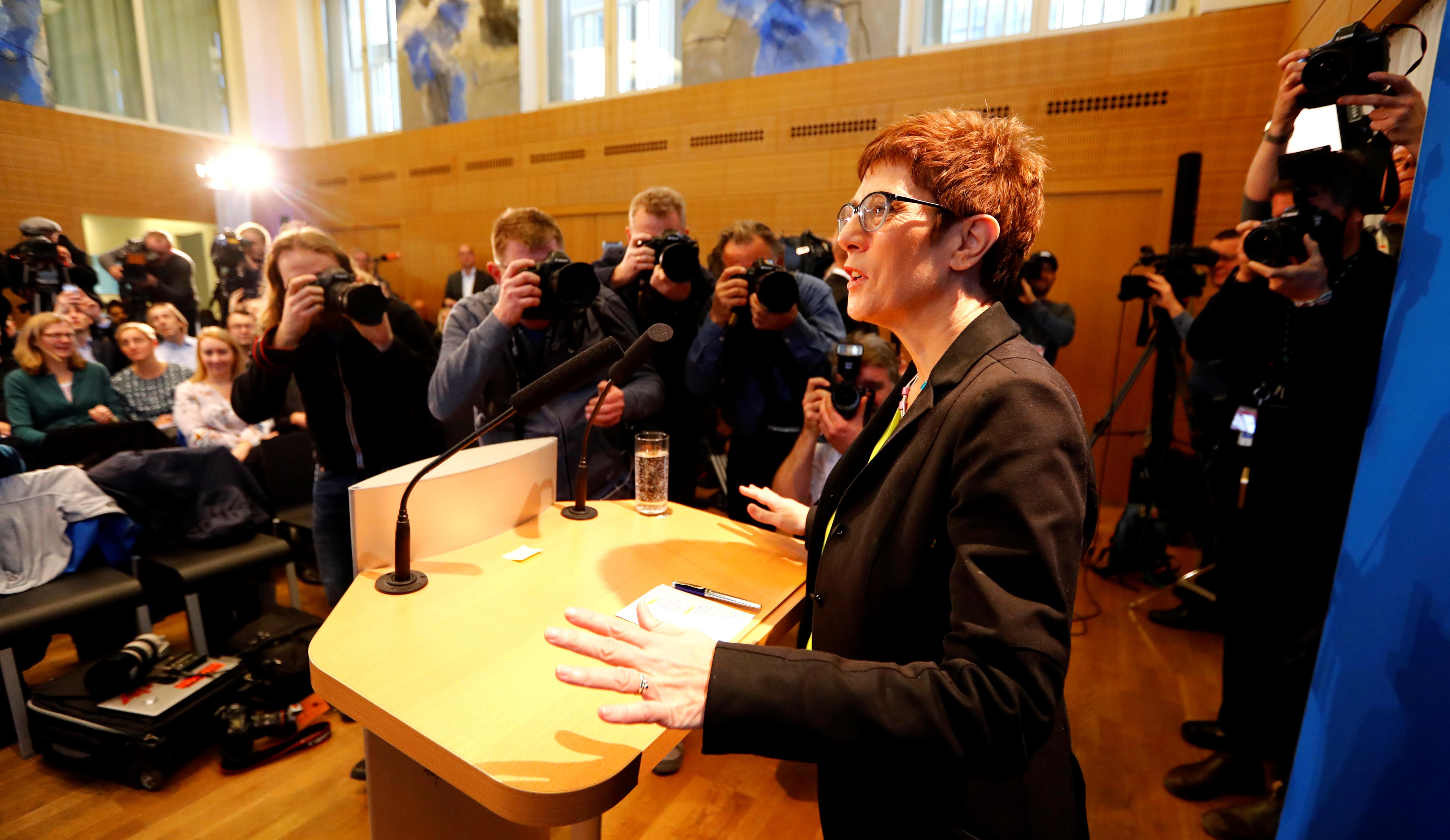 Should she secure the CDU leadership, Kramp-Karrenbauer, 56, would be in pole position to succeed Merkel as chancellor. But she makes her pitch as polls show the chancellor’s centrist cause is falling out of favor with German voters.

Kramp-Karrenbauer, who is the conservative party’s general secretary, lags businessman Friedrich Merz, 62, in the race, polls show. Merkel said last week she would vacate the CDU leadership at a party congress in December, heralding the end of a 13-year era in which she has dominated European politics.

Kramp-Karrenbauer, seen as Merkel’s heir, could probably cohabit as party leader with Merkel as chancellor, which she wants to remain until the end of the parliamentary term in 2021.

But according to a poll for Bild newspaper on Wednesday, two thirds of voters want Merkel to step down. For Kramp-Karrenbauer, the challenge is to define her own profile distinct from Merkel’s, while remaining loyal to the chancellor.

“This is the end of the era,” Kramp-Karrenbauer, whom German media nicknamed “AKK” after her initials, told reporters in Berlin. “We have to thank Angela Merkel for a great deal.”

“My experience is … that one always stands on the shoulders of one’s predecessor,” she added, stressing the need for political stability in uncertain times.

“We need to work out a way for people here to feel at home – people who have lived here a long time and people who have arrived more recently,” she added, with reference to the upheaval caused by Germany’s migrant crisis in 2015.

She laid out the challenges of delivering prosperity and social cohesion but did not spell out any specific policy prescriptions.

It could prove harder for Merkel to remain chancellor with Merz as CDU leader, as he lost out to her in a power struggle in 2002 and has since pursued a successful business career.

Kramp-Karrenbauer’s advantage over the other two candidates, Merz and Health Minister Jens Spahn, is that she has won an election – albeit in the small western state of Saarland – and served as state premier there.

She is on the CDU’s left on economic policy, being a strong advocate of the minimum wage. Before the 2013 national election she suggested the top rate of tax be raised to 53 percent.

But she is conservative on social issues, opposing advertising for abortions, and caused controversy in 2015 by saying allowing same-sex marriages could open the door to incest and polygamy.

Vowing “not to pursue an election campaign against others”, Kramp-Karrenbauer delivered a message of party cohesion and said that if she won the leadership she would seek to work with Merz and Spahn, who lags the other two candidates in polls.

Merz is chairman of the German arm of the U.S. hedge fund BlackRock, whose Munich offices prosecutors searched on Tuesday as part of Germany’s largest post-war fraud investigation, a person with knowledge of the matter said. BlackRock says it is fully cooperating with the investigation covering the period of 2007-2011.

Merz took his role at BlackRock only in 2016 and has condemned illicit dividend stripping, but his role at the world’s biggest fund manager risks reflecting poorly on him in socially-minded Germany.

In an election, Merz’s right-wing pitch could draw back some CDU voters from the anti-immigration Alternative for Germany, which has gained from unease among some voters about the influx of more than 1 million asylum seekers since 2015.

Kramp-Karrenbauer is more likely to be able to form a coalition with the rising force in German politics – the Greens, now the second-strongest party.