What social distancing? 250,000 bikers in South Dakota for festival

Thousands more bikers pack Sturgis in South Dakota for 10-day festival as mayor says ‘we can’t stop the crowd of up to 250,000 from coming’ – despite 60 percent of city residents wanting the event postponed

The mayor of a small town in South Dakota says he is crossing his fingers that people behave responsibly, as up to 250,000 descend on his town of 7,000 for an annual motorbike rally.

He said his team had set up sanitation stations and given out masks – although face coverings were not required.

‘We cannot stop people from coming,’ he told CNN on Thursday, ahead of the annual event which has run for 80 years.

Health officials are still warning against even small gatherings, and states with relatively low spread – such as South Dakota – are ordering visitors from hot spots to self-quarantine.

No restrictions are in place for the start of the 10-day jamboree, however.

Sturgis, South Dakota, is set to welcome 250,000 people this weekend for a motorbike rally 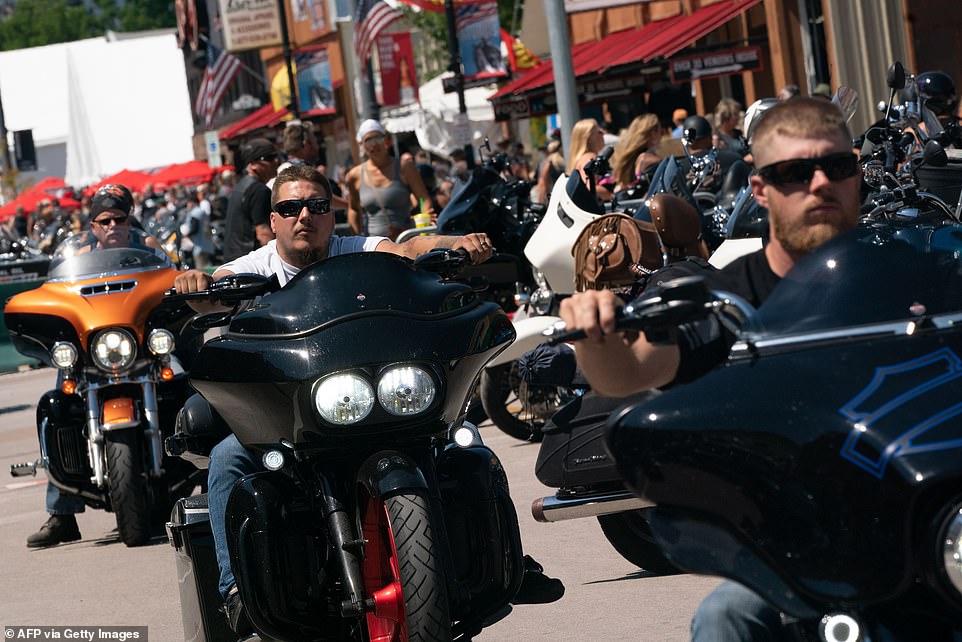 Motorbike riders are pictured flocking to Sturgis, South Dakota, on Saturday for a rally 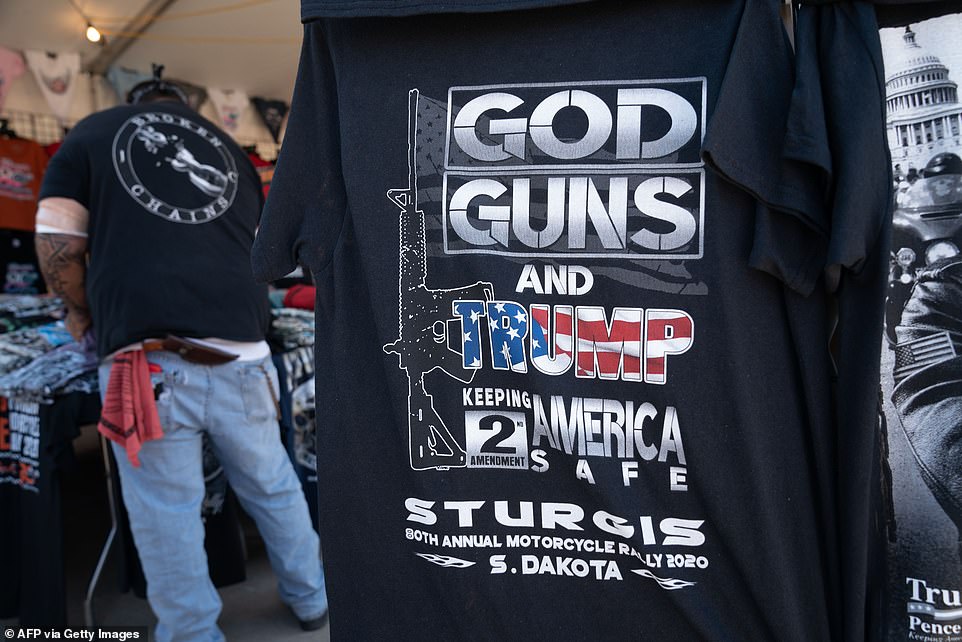 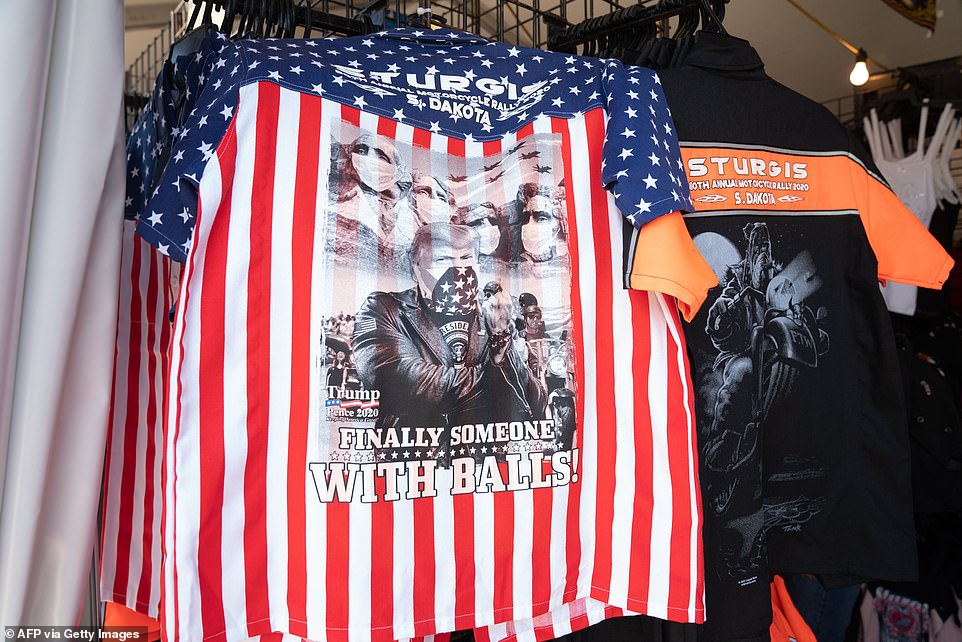 The motorcyclist event is estimated to bring in $1.3 million to the annual economy 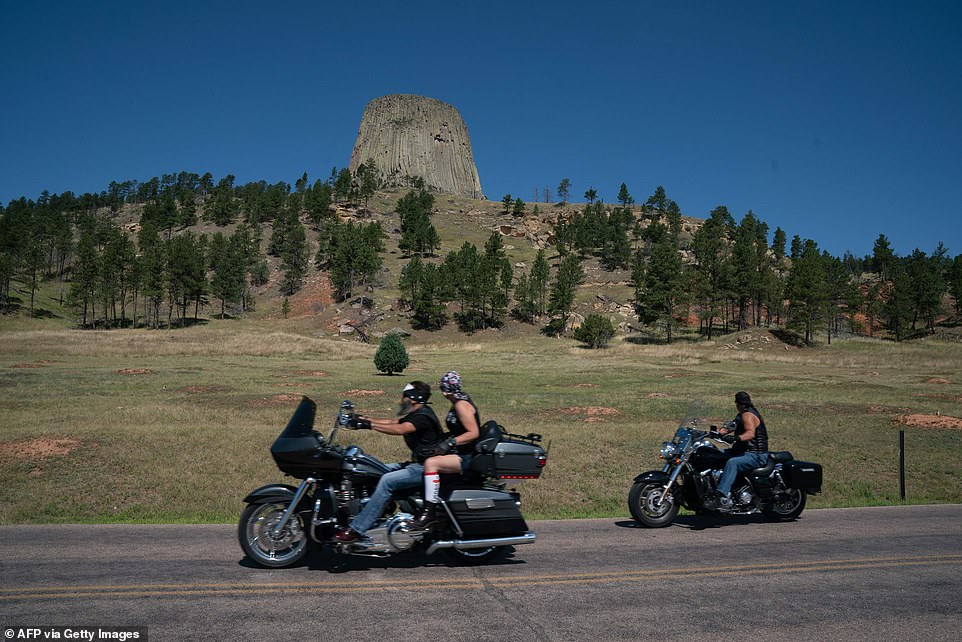 An estimated 250,000 people gather in South Dakota before heading out to explore the region

A city survey found that more than 60 per cent of Sturgis residents wanted the event postponed, the Associated Press reported.

‘This is a huge, foolish mistake to make to host the rally this year,’ said Linda Chaplin, a Sturgis resident, in a message to city counselors earlier this summer.

‘The government of Sturgis needs to care most for its citizens.’

‘My grandma is absolutely terrified because she has diabetes and is in her 80s and has lupus,’ another resident told CNN.

‘If she gets it, it’s a death sentence.’

The event, in South Dakota’s Black Hills, is hugely important to the local economy, bringing in $1.3 million in city and state tax revenue last year, according to the Argus Leader.

A mayor’s letter overviewing Sturgis describes how the city ‘comes alive’ with half a million visitors during a typical August rally, suddenly transformed into ‘the largest community in the state’ with concerts and races.

On June 15, city council members voted 8 to 1 to continue with the motorbike rally – albeit without the usual seating in a plaza.

Speaking Thursday to CNN, Carstensen said that keeping the rally has been ‘a difficult decision.’

He noted that the city will be expanding a program to deliver supplies to the homes of those worried about the virus.

But there are no quarantine recommendations for bikers from hot spot states, the mayor said, and leaders are just ‘hoping people make the right choices.’

Visitors have already been flocking to the Black Hills amid the pandemic, he said.

‘We hope people come,’ Noem said of the motorcycle rally.

‘Our economy benefits when people come and visit us.’ 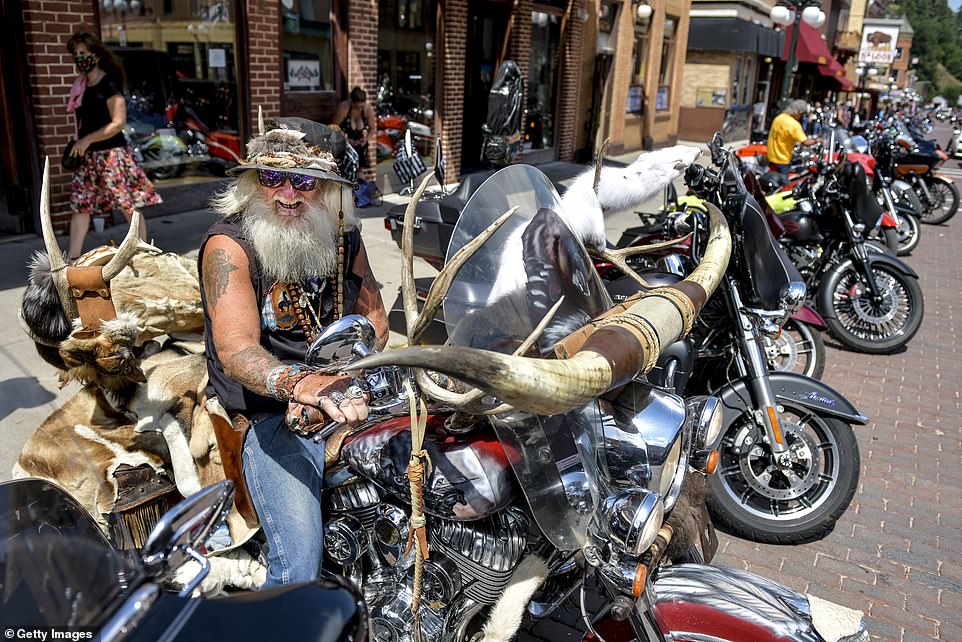 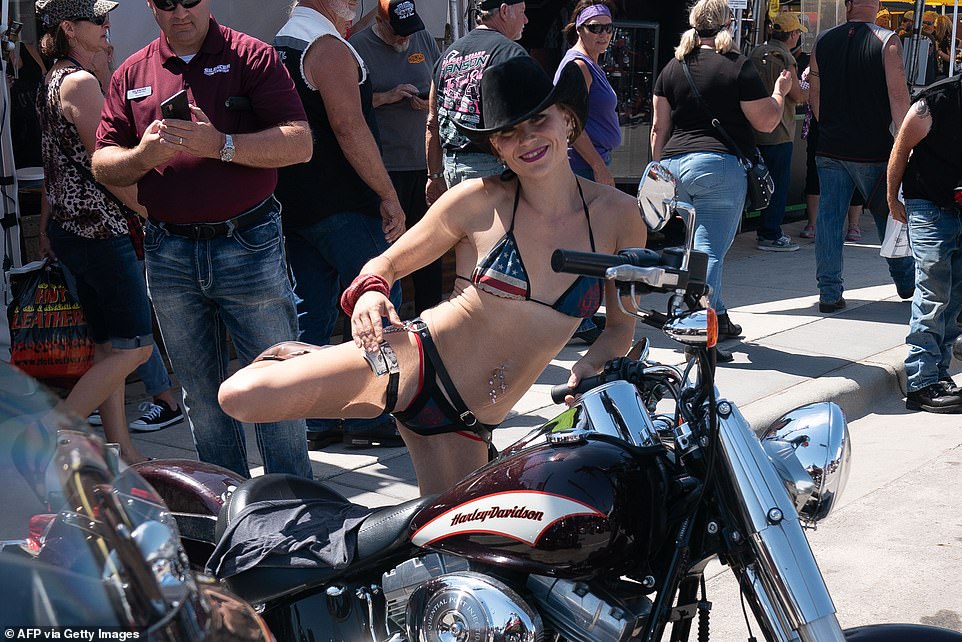 A woman readies to ride her Harley Davidson in Sturgis, South Dakota, on Saturday 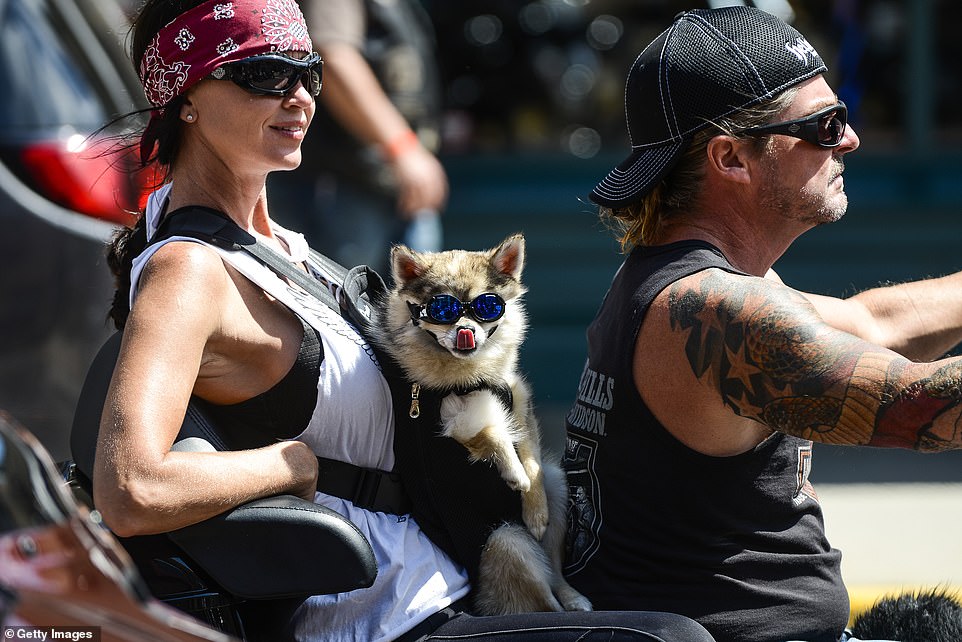 A dog rides on a motorcycle through downtown Deadwood, South Dakota, on Saturday 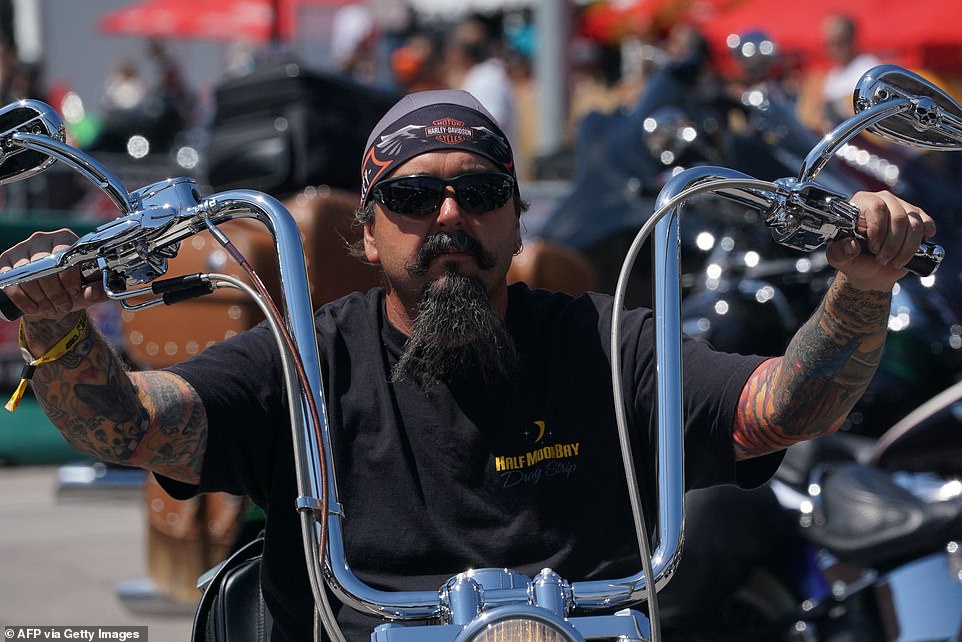 A motorbike rider is pictured on Main Street, Sturgis, on Saturday ahead of the rally 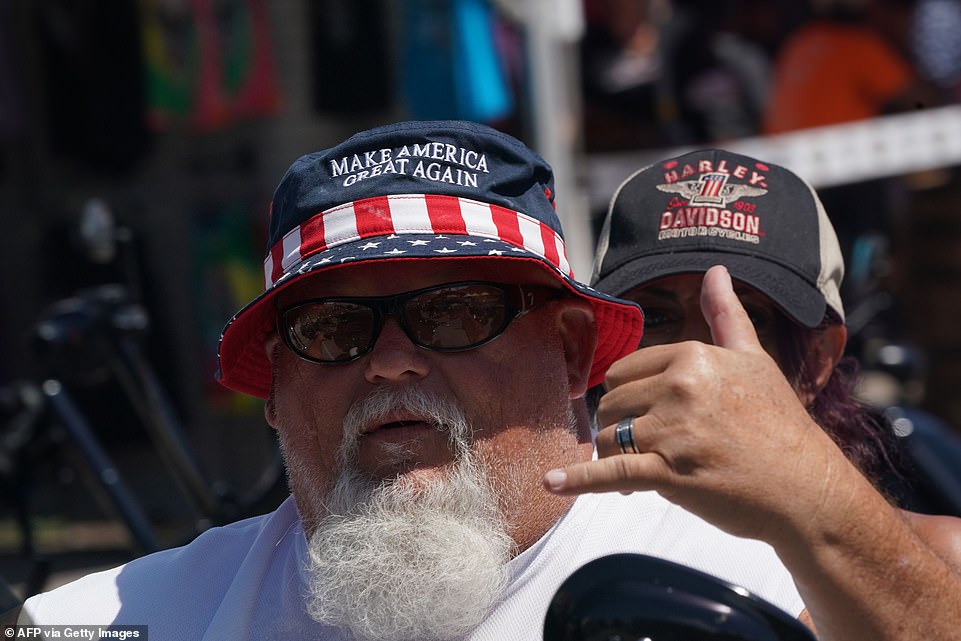 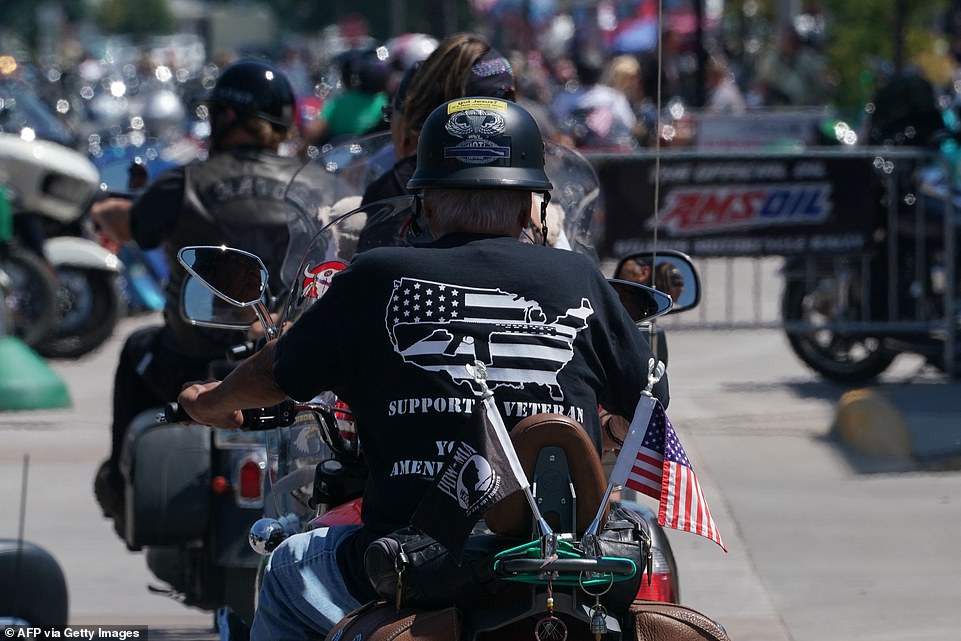 Up to 250,000 people are expected at the South Dakota rally, pictured on Saturday 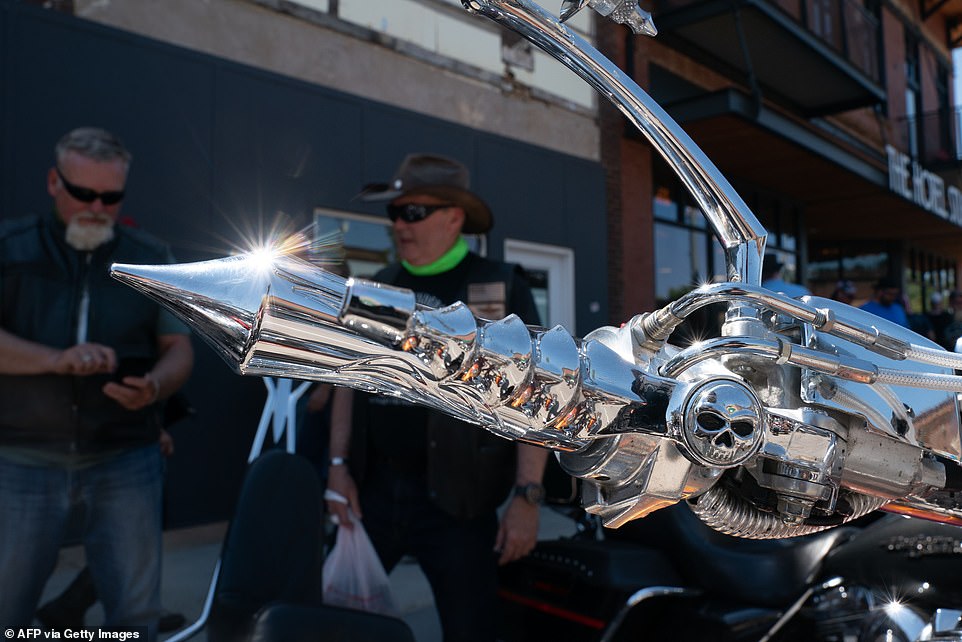 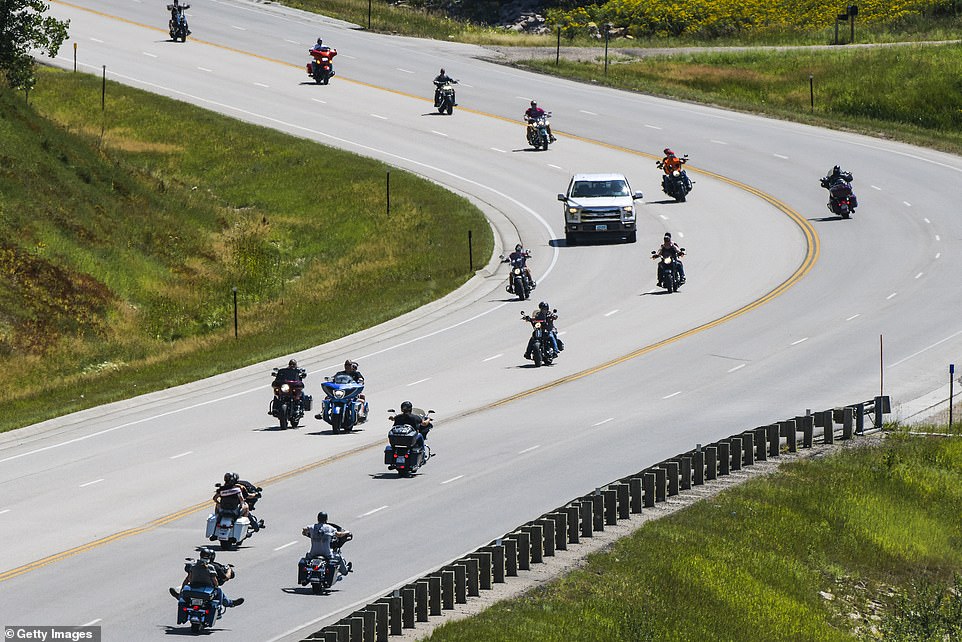 Up to 250,000 people are expected in South Dakota for the annual jamboree in Sturgis

Noem denounced ‘herd mentality’ and said coronavirus restrictions were not right for her rural state.

‘South Dakota is not New York City,’ she said.

A South Dakota pork-processing plant soon became one of the country’s biggest coronavirus clusters in the spring – but cases eventually dipped and the sparsely populated state did not shatter daily records this summer like many Southern and Western states.

Average new daily cases reported in South Dakota have risen in recent weeks but remain under 100, and the state records an average of one or two covid-19 deaths a day.

Benjamin Aaker, the president of the South Dakota State Medical Association, told CNN on Thursday that he is worried – but insisted the rally can be held safely if people follow recommendations such as social distancing, hand-washing and wearing masks.

‘It’s already here,’ he said of the coronavirus.

‘But is it going to get worse with an event such as this?

‘If we don’t take those proper precautions, it will.’