What are Pakistan’s blasphemy laws? 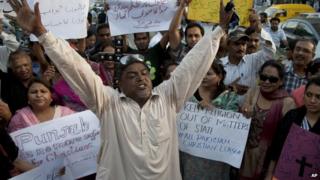 Pakistan’s blasphemy laws carry a potential death sentence for anyone who insults Islam. Critics say they have been used to persecute minority faiths and unfairly target minorities.

When do the laws date from?

The offences relating to religion were first codified by India’s British rulers in 1860, and were expanded in 1927. Pakistan inherited these laws when it came into existence after the partition of India in 1947.

Between 1980 and 1986, a number of clauses were added to the laws by the military government of General Zia-ul Haq. He wanted to “Islamicise” them and also legally to separate the Ahmadi community, declared non-Muslim in 1973, from the main body of Pakistan’s overwhelmingly Muslim population.

What do the laws say?

The law enacted by the British made it a crime to disturb a religious assembly, trespass on burial grounds, insult religious beliefs or intentionally destroy or defile a place or an object of worship. The maximum punishment under these laws ranges from one year to 10 years in jail, with or without a fine.

During the 1980s the blasphemy laws were created and expanded in several instalments. In 1980, making derogatory remarks against Islamic personages was made an offence, carrying a maximum punishment of three years in jail.

In 1982, another clause prescribed life imprisonment for “wilful” desecration of the Koran, the Muslim holy book. In 1986, a separate clause was inserted to punish blasphemy against the Prophet Muhammad and the penalty recommended was “death, or imprisonment for life”, in that order.

Who is affected by the laws?

The Human Rights Commission of Pakistan (HRCP) – a voluntary organisation – has been documenting blasphemy cases for decades. It says that Muslims constitute the majority of those booked under these laws, closely followed by the Ahmadi community.

Data provided by National Commission for Justice and Peace (NCJP) shows a total of 633 Muslims, 494 Ahmedis, 187 Christians and 21 Hindus have been accused under various clauses of the blasphemy law since 1987.

The vast majority of these cases were lodged for desecration of the Koran – far fewer for blasphemy against the Prophet Muhammad.

Critics say the fact that minorities figure so prominently in the cases shows how the laws are unfairly applied. Often the laws are used to settle personal scores and have little or nothing to do with religion.

Correspondents say the mere accusation of blasphemy is enough to make someone a target for hardliners, as is defending those accused of blasphemy or calling for the laws to be reformed.

Do most Pakistanis support the laws?

A large majority of Pakistani people support the idea that blasphemers should be punished, but there is little understanding of what the religious scripture says as opposed to how the modern-day law is codified.

Many believe the law, as codified by the military regime of General Zia-ul Haq back in the 1980s, is in fact straight out of the Koran and therefore is not man-made.

When Punjab Governor Salman Taseer – a prominent critic of the law – was assassinated by his bodyguard in 2011, Pakistan was divided, with some hailing his killer as a hero.

Why do the authorities not amend them?

Amending the blasphemy laws has been on the agenda of nearly all the popular secular parties. But none of them has made much progress – principally because of the sensitivities over the issue, but also because no major party wants to antagonise the religious parties.

A month after Salman Taseer was killed, Religious Minorities Minister Shahbaz Bhatti, a Christian who spoke out against the laws, was shot dead in Islamabad, underlining the threat faced by critics of the law.

In 2010, a member of the ruling Pakistan People’s Party (PPP), Sherry Rehman, introduced a private bill to amend the blasphemy law. Her bill sought to change procedures of religious offences so that they would be reported to a higher police official and the cases heard directly by the higher courts.

The bill was passed on to a parliamentary committee for vetting. It was withdrawn in February 2011 under pressure from religious forces as well as some opposition political groups.