As global figures remember 100th anniversary of the end of World War I, political leaders warn of rising nationalism. 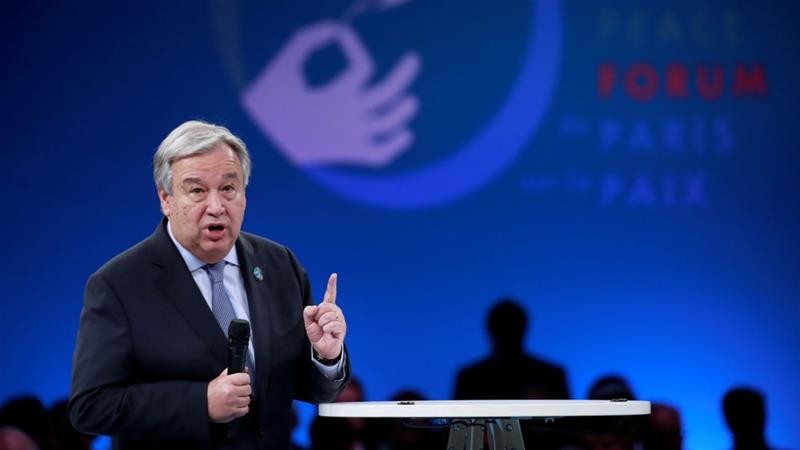 The UN chief has said the world today has several of the ingredients that led to the failure of the peace that followed World War I, in comments marking the 100th anniversary of the end of that conflict, as the leaders of France and Germany warned about the dangers of nationalism.

Without referring to Donald Trump by name, all three of them on Sunday railed against the US president’s world view and the dangers of disregarding international norms as they spoke at the start of the Paris Peace Forum in the French capital.

“As I see it, several elements today have many parallels with both the start of the 20th century and the 1930s, giving us grounds to fear that an unpredictable chain of events could ensue,” Antonio Guterres, the United Nations secretary-general, said.

For her part, Angela Merkel, the chancellor of Germany, expressed her “concern” that “blinkered nationalist views may gain ground once again”.

Merkel warned that the benefits of international cooperation, “the peaceful balancing of interests, even the European peace project – people are calling them into question again.”

Her comments came shortly after French President Emmanuel Macron made similar remarks, seemingly aimed at Trump who in a recent speech called himself a nationalist.

During his 20-minute speech, Macron called nationalism “the exact opposite” of the patriotism shown by soldiers.

“Nationalism is a betrayal,” he said.

“By saying our interests come first and others don’t matter we are erasing what makes a nation precious, what makes it live, what makes it great and most importantly of all, its moral values,” he told those in attendance, which included Trump among others.

“Let us build our hopes rather than playing our fears against each other.”

The French president also called on his fellow leaders to not forget the lessons of the past.

“Ruining this hope with a fascination for isolation, violence or domination would be a mistake for which future generations would rightly find us responsible,” Macron said.

In a speech at the Suresnes military cemetery in the western Paris suburb, Trump paid tribute to US soldiers who took part in World War I.

The US president said he and other officials were “gathered at this hallowed resting place to pay tribute to brave Americans” who died a century ago, as well as to the French troops with whom they fought.

“In his speech, Macron spoke about the futility of war and promoted his multilateral vision of the world in the face of some leaders who increasingly look inward,” Al Jazeera correspondent Natacha Butler said from Paris.

She added that dozens of students took part in the ceremony, representing a new generation who hope that history’s mistakes will not be repeated.

“The armistice treaty marked a victory for allied powers and a defeat for German forces, but the commemoration hasn’t been about national triumph, it’s been about reconciliation,” Butler said.

“The ceremony brought together presidents and politicians who are often at odds with each other, a moment for them to reflect on and remember a conflict that ravaged continents, cut short lives and tore families apart,” Butler concluded.

Sunday’s speeches were part of a string of events to commemorate the signing of an armistice on November 11, 1918, to end World War I.

That conflict erupted in 1914 after a teenage Bosnian Serb assassinated Archduke Franz Ferdinand, the heir to the Austro-Hungarian throne, igniting a conflict that was contemporaneously described as “the war to end all wars”.

In the four years of fighting, remembered for brutal trench warfare and the first large-scale use of gas as a weapon, France, British, Russia and the US had the main opposed a German-led coalition that also included the Austro-Hungarian and Ottoman empires.

More than 70 million military personnel were mobilised and an estimated 10 million lost their lives.