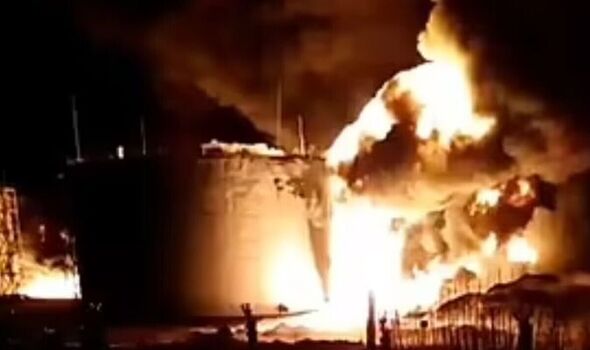 An oil depot in Russia has exploded into flames following a massive explosion as a result of a drone attack thought to have been orchestrated by Ukraine. A trio of tanks holding thousands of tonnes of fuel were set alight at around 6am local time at a site in Bryansk, a Russian region that borders Ukraine to the north. The blaze was triggered after a drone dropped explosives into one of the fuel tanks, according to Russian media. Nobody was injured in the attack.

Dramatic video footage shortly after the attack shows two fuel tanks spewing smoke into the early morning sky, with at least one showing signs of blast damage, with its metal shell bent outwards.

Russia media has reported the origin of the drone is ‘unknown’ and Kyiv has not claimed responsibility for it yet.

But it is widely thought Ukraine is behind scored of attacks on facilities used to supply Putin’s armies located in Russia’s western border regions.