Dozens of people have been quarantined inside an apartment block in Germany for the last two days after one person tested positive for the Indian variant of Covid.

All 189 residents of two tower blocks in Velbert, near Dortmund, have been locked up since the infection was first detected there during a routine test on Sunday.

Everyone has now been swabbed as part of a surge testing effort, with 19 people from four households found to be Covid positive with more results due today.

However, it is not yet clear whether any of those people are infected with the Indian variant since genetic sequencing – which is used to detect variants – takes up to a week to complete. 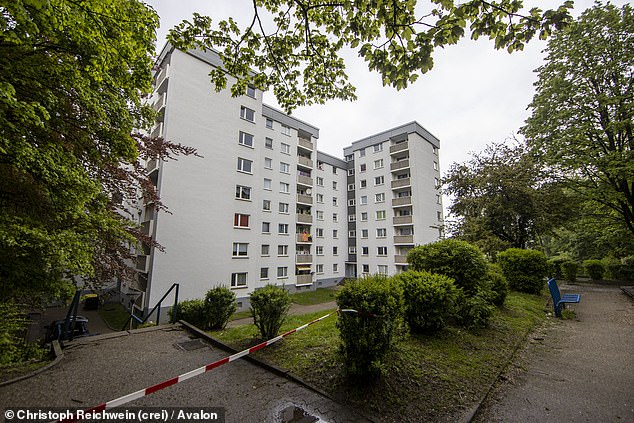 Work is also underway to trace the contacts of all those living in the tower blocks. Health officials have so-far refused to say how long the quarantine might last.

In the meantime, guards have been placed outside the blocks to ensure nobody leaves while red cross workers are doing people’s shopping and taking their dogs for walks, local station WDR reports.

It is not clear how the initial case was caused, though it is not the first time the variant has been found in Germany – with around 260 cases identified so far.

Germany currently bans all travel to or from countries with ‘variants of concern’, including India, with the only exemption being for returning German citizens.

Even then, citizens have to go straight home from the airport and quarantine for 14 days with no exceptions.

But the apartment quarantine does come amid fresh fears over the Indian variant’s spread after cases increased rapidly in the UK – which has now identified 3,700 cases – putting the country’s lockdown easing plans at risk.

While Covid cases in the UK are still falling overall due largely to the success of the vaccine roll-out, cases of the Indian variant have quadrupled in a fortnight.

In multiple areas, the new variant appears to be ‘out-competing’ the previous Kent strain, meaning it is likely more-infectious.

That has led the WHO to declare the strain a ‘variant of concern’, putting other nations including on high alert.

Aside from Germany and the UK, the Indian strain has been detected in other European nations including Denmark, Ireland, Italy, Belgium, Switzerland, France, the Netherlands and Spain – albeit at low levels.

It is not yet known whether vaccines will be able to stop the spread of the variant, though UK officials are confident current jabs will largely prevent serious infections and deaths from it.

As a result, the country is pressing ahead with reopening its economy with indoor socialising and foreign holidays permitted from this week, while cinemas and theatres have been allowed to reopen.

The UK remains far ahead of its European counterparts in terms of vaccination, though the continent is catching up – with EU countries crossing the threshold 200million vaccines administered today.

Off the back of that news, German health minister Jens Spahn announced that everyone aged over 18 will be welcome to come for a jab from June 7.

Mr Spahn said the current system of prioritization in which the most vulnerable groups are to be vaccinated first will no longer be valid then.

‘This does not mean that everyone will get an appointment within days, but … everyone who wants to get vaccinated will get an offer,’ he said.

Spahn said that the vaccination campaign has picked up speed in recent weeks and that by the end of May about 40 per cent of all people in Germany will have received at least one shot.

He said 70 per cent of those above the age of 60 have received one shot, about one-quarter of them are fully vaccinated.

All in all, 40 million doses of coronavirus vaccines have been given and around nine million people are fully vaccinated, in this country of 83 million.

After months of lockdown, the infection rate has been dropping in Germany and some states are slowly starting to open up outdoor dining and various shopping possibilities.

Meanwhile the Czech government has announced a new wave of easing coronavirus restrictions amid falling numbers of infected people.

Starting May 24, all hotels are allowed to return to business. The guests will need to present a negative coronavirus test or be vaccinated or recover from COVID-19. If they want to stay longer than seven days, an additional test will be required.

At the same time, all elementary schools and high schools will fully reopen. Schoolchildren and students will be tested once a week.

The same applies for universities where, however, the spring term in many cases ends next week.

It will be also possible for up to 1,000 people to attend outdoor cultural events, while up to 500 are allowed at such events indoor.

Germany is planning to open up its vaccine drive to everyone over the age of 18 in the coming weeks as it attempts to catch up with the UK, which has vaccinated the fastest in Europe

Monday’s announcement comes on the day when Czech bars and restaurants are reopening for outdoor dining.

The number of people infected per 100,000 inhabitants in last seven days has dropped to 71 in the Czech Republic.

At least 200 million doses of Covid-19 vaccines have been given in the European Union as of Tuesday, according to AFP data tallying up official figures given by member states’ health services.

The milestone indicates that the EU should be on track to meet its goal of fully vaccinating 70 percent of adults – meaning roughly 255 million people out of its total 448 million population – by late July.

As of 0830 GMT, at least 200 million doses have been administered in the EU, according to the AFP data.

At least 52.9 million people have been completely vaccinated, with two doses in the case of the vaccines from BioNTech/Pfizer, Moderna and AstraZeneca, or one dose for those inoculated with the single-shot Johnson & Johnson vaccine.

That figure amounts to 11.8 percent of the EU population.

The data showed that Malta was leading the EU table, with 32.5 percent of its small population fully vaccinated, while Bulgaria was trailing badly, with just 6.1 percent inoculated.

Globally, the AFP data showed that 1.5 billion doses have been administered.

By way of comparison with other wealthy territories, Israel has 59 percent of its population inoculated with two doses, while the United States has 35 percent fully vaccinated, and Britain has 30 percent done.

The European Commission, contacted by AFP, did not immediately respond with comment about the vaccination milestone.

It did however say that its vaccine export authorisation mechanism had, between January 30 and May 11, approved 941 export requests from pharmaceutical companies producing Covid-19 vaccines in the EU and rejected one – a March shipment of 250,000 AstraZeneca doses meant for Australia.

The vaccines exports went to 45 countries and territories, it said, including the United States, Britain, Israel, India, Australia, Canada and Brazil.