This is the bizarre moment two college students were spotted moving a couch down a city street using hire scooters.

Matt Cortigiani and Alex Wheels caught the attention of an entire neighborhood as they wheeled a bulky item between houses.

The pair, who were filmed in St Louis, Missouri had tried unsuccessfully to find a truck for the move after Mr Wheels had bought it off his friend.

But after a quick attempt at trying to carry the furniture the whole two miles, they boys decided to get inventive.

One of the students, Matt Cortigiani, said: ‘Alex Wheels and I met at WashU’s PT school. I just dropped out last week and am moving out of St Louis and he offered to buy my couch.

‘He wasn’t able to find a truck to borrow and as we left my apartment on Newstead Avenue and W Pine Blvd we realized we did not have the energy to carry this thing the 2 miles to his place on Shenandoah.’ 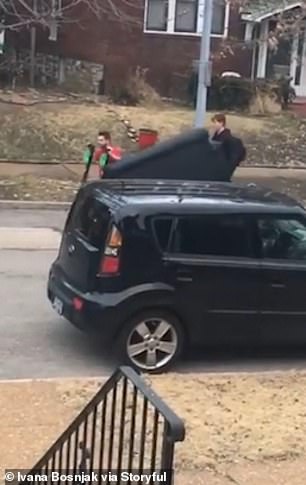 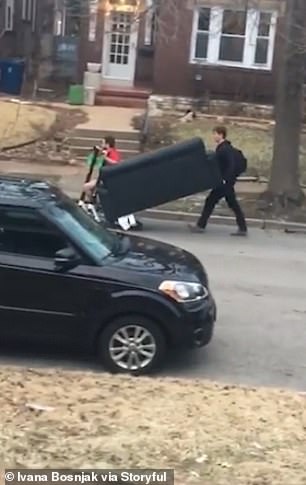 However, help was at hand. On a nearby street they spotted a pair of Lime scooters (like a privately funded Boris bike), and thought ‘what’s the worst that could happen?’.

Taking it in turns to steer and lift, the boys shifted the heavy couch through Midtown all the way to Mr Wheels’ apartment.

‘Luckily, we happened upon 2 lime scooters and put our minds to work.

‘We took turns as one person sat on the edge of the couch to steer the scooters while the other lifted the back edge off the ground. 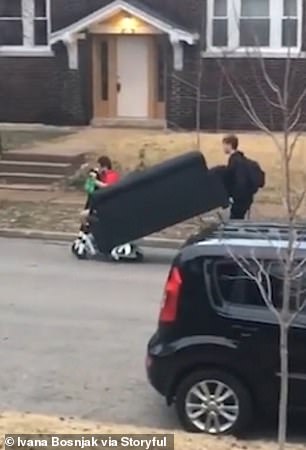 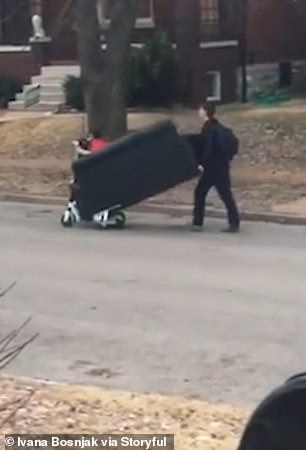 Taking it in turns to steer and lift, the boys shifted the heavy couch through Midtown all the way to Mr Wheels’ apartment

‘We embarked on a 2 hour journey through St. Louis, just two friends, two limes, and a 150 pound couch.

‘Glad we could make so many people smile along the way!’

Ivana Bosnjak, who posted the original video Facebook said: ‘The stuff you see in South City.

‘These guys are using Lime Scooters to move a couch, oh my god.

‘You guys made my weekend, I can’t tell you how long it’s been since I’ve laughed so hard.’