This is the moment two plane crash survivors posed for a selfie while still covered in firefighting foam after their aircraft hit a fire truck in a crash in Peru last week.

The pair had been on a LATAM Airlines plane which crashed on Friday while taking off from a runway at Lima’s international airport in the south of the country.

Unbeknown to the pair, two firefighters were killed in the crash after the the firetruck sped onto the runway and into the path of the plane, carrying 120 passengers. 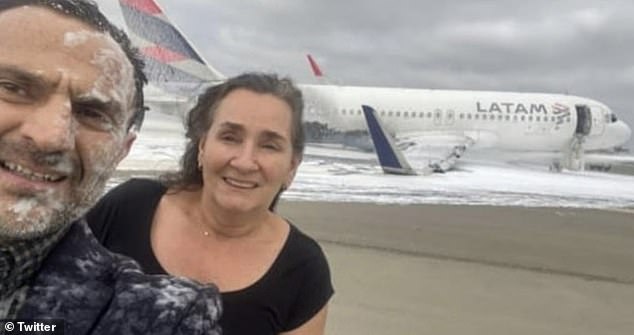 Video of the crash showed the truck was was hit by a wing of the plane and caused some of the aircraft’s wheels to buckle. The plane skidded on its undercarriage for hundreds of feet down the runway, and part of it caught fire.

Miraculously, none of the crew or passengers were killed or injured in the accident.

Despite their near-death experience, two passengers – a man and a woman – took a moment while standing on the runway to take a selfie with the aircraft, clearly relieved having survived the crash.

The pair are shown smiling gingerly for the camera, with the man’s face still covered in white foam used to put the fire on the plane out.

Behind them, the LATAM aircraft can be seen partially burned and tilted onto its right-hand wing, which is on the ground. The door to the plane is still open, and the runway around the aircraft is covered in foam, which looks like a coating of snow.

The image was posted to Twitter by a man named Enrique Varsi-Rospigliosi, who appeared to be the man in the photo. Along-side the photo, he wrote: ‘When life gives you a second chance #latam’. 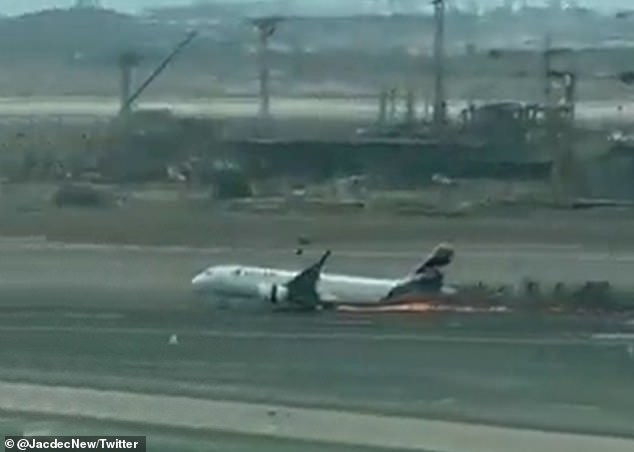 Flames and black smoke could be seen coming out from the rear of the plane after the crash, which was caused when the aircraft slammed into a firetruck as it was taking off from Lima

Many users of the social media platform celebrated their survival, and defended the pair for posting a selfie so soon after the crash after the came under some criticism.

‘In those moments of tragedy, those who leave their lives just want to share the miracle of…Living!’ one person wrote under the selfie.

‘One of the best posts of the year. Go home calmly, hug your loved ones and enjoy a beautiful family Christmas,’ another person wrote.

However, some said it was ‘bad taste’ for them to post the selfie.

It was reported that the pair were not aware that the two firefighters had been killed in the crash when they took the picture of the plane.

The firefighters were participating in a disaster response exercise, officials said in a news conference Saturday. They said the drill was part of the preparations for a new runway, scheduled to be ready next January.

Video of the incident posted to social media showed the jet colliding with the firetruck then rapidly catching fire and smoking heavily as it ground to a halt. 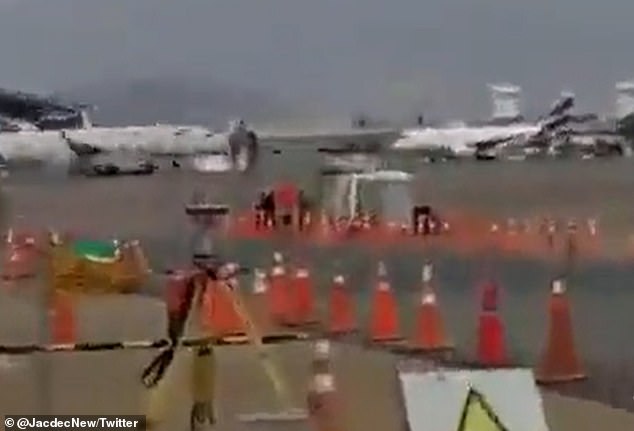 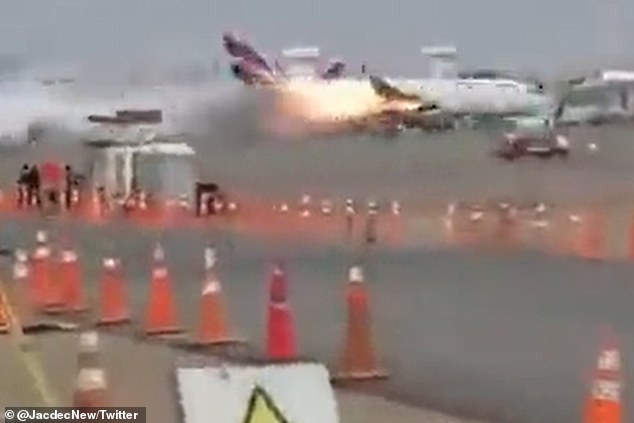 Lima Airport Partners, the company that operates Jorge Chávez International Airport, said in a tweet that operations at the facility had been suspended. There were 120 passengers and six crew members aboard the Airbus A320neo.

‘Our teams are providing the necessary care to all passengers, who are in good condition,’ the company said.

‘Everyone in the departure lounge was apprehensive until we saw the plane stopped, and then the fire engines and ambulances arrived,’ said Mauro Ferreira, a Brazilian waiting to board a flight home to Panama, who filmed the incident.

‘It was a harrowing feeling because we didn’t know how many people were inside the plane and the flames were very tall.’ 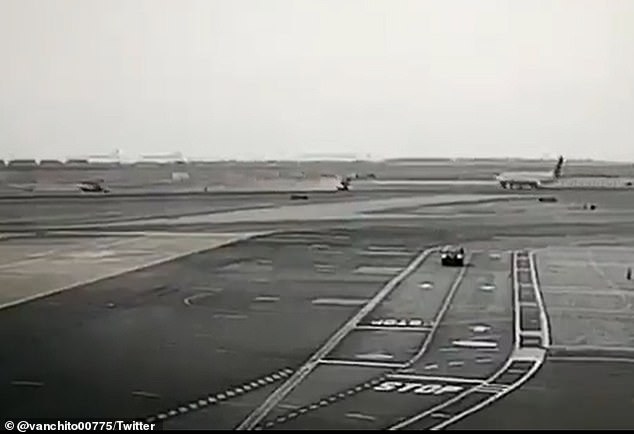 From another angle, the plane can be seen hurtling down the runway with the fire truck directly in its path 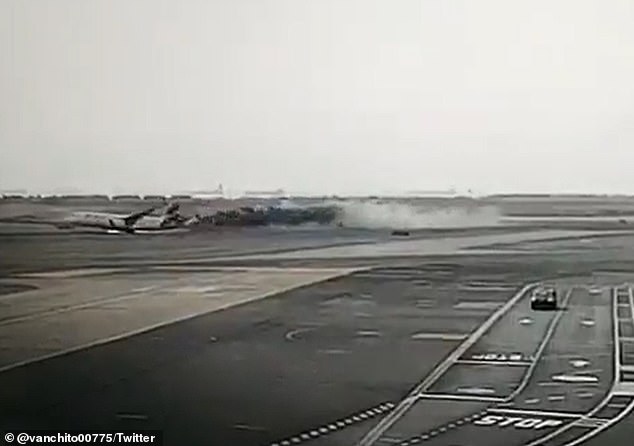 Moments later, the plane slammed into the truck leaving a trail of thick black smoke behind 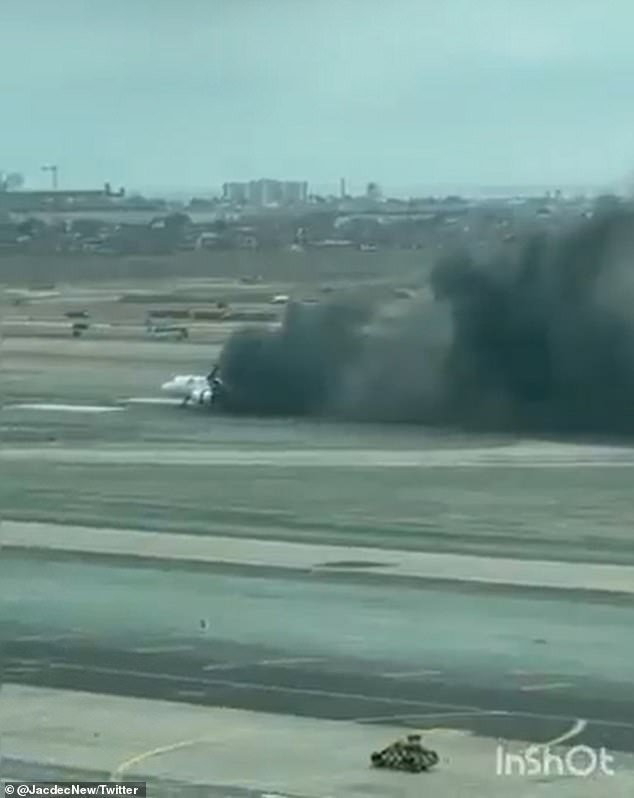 Luis Ponce La Jara, general commander of the fire department, said two firefighters were killed and one was injured when the truck they were in was struck by the plane.

Both the plane and the firetruck were in motion when they collided.

President Pedro Castillo expressed his condolences to the families of the firefighters in a tweet.

Flight LA2213 was taking off from Lima’s main airport en route to the Peruvian city of Juliaca.

Videos on social media showed smoke coming from a large plane on the runway. 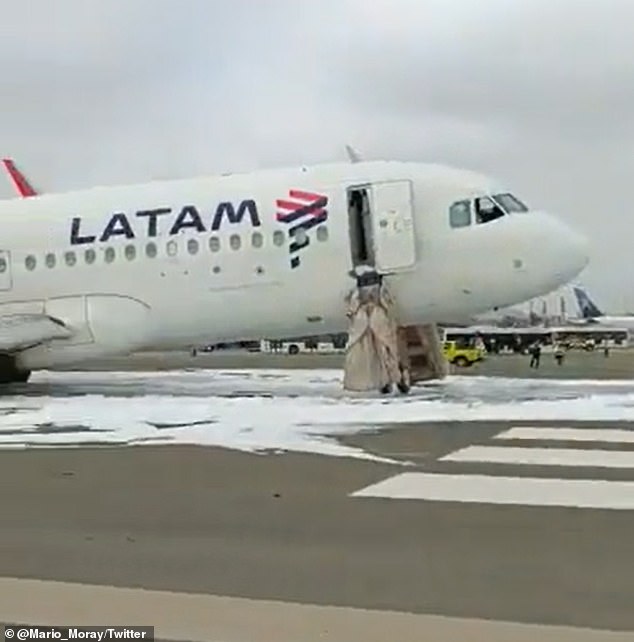 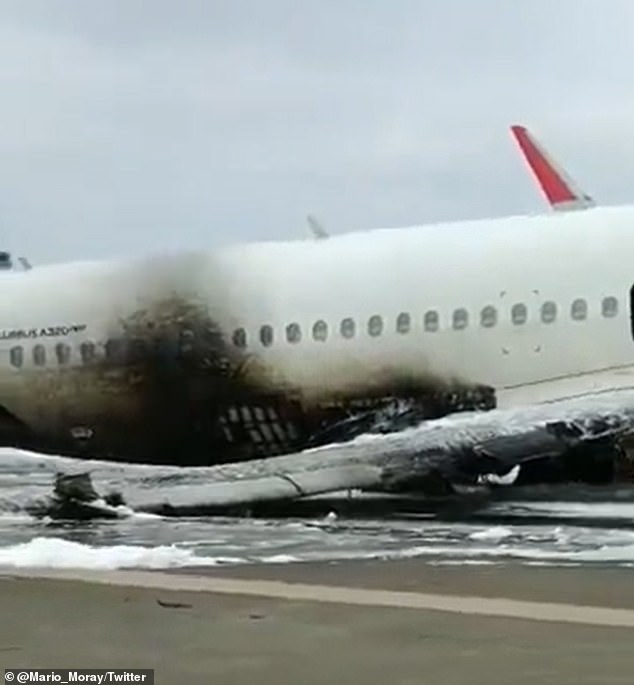 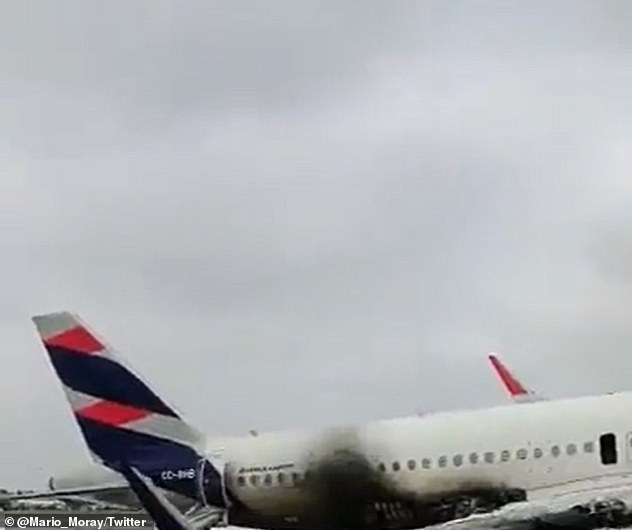 LATAM Airlines said it lamented the death of the firefighters and would provide flexibility to reprogram flights to affected passengers at no extra cost.

‘No emergency was reported on the flight It was a flight that was in optimal conditions to take off, it had authorization to take off and it encountered a truck on the runway and we don’t know what the truck was doing there,’ said Manuel van Oordt, general manager of LATAM Airlines Peru.

‘We have to investigate and establish why it was there.’

The Prosecutor´s Office in Callao, where the airport is located, said an investigation into the cause of the accident had been opened.

According to the fire department, the incident occurred at 3:25pm.

Aviation authorities said operations at Jorge Chávez International Airport were suspended until 1pm on Saturday with flights being diverted to other airports in the meantime.

This is the second incident in less than a month involving LATAM Airlines, after one of its planes had its nose destroyed during a severe storm that forced it to make an emergency landing.