Survived the horrors of the blitz in Portsmouth, Plymouth

John McSweeney, son to Daniel and Ellen, brother to Brian, Janet and Michael was born in the front room of his parents’ home in Potters Bars, England.

As with many families at the outbreak of World War II, his father was called up into army until 1945. During the war, John survived the horrors of the blitz in Portsmouth, Plymouth, and London, even sleeping in open fields sheltering from bombings and lying on a deck of an evacuation boat surrounded by fire in a harbor.

He could often be heard when spying a plane above, “that’s OK it’s one of ours”.

When victory in Europe day finally arrived, street parties began where John was carried upon the shoulders of an American soldier through the masses of people that flooded the street in celebration.

Post-war, John grew up as a country boy in Potters Bar where his love of the outdoors and mother nature flourished.

In school, John was often told by teachers to pay attention as he was often found looking out the window planning that day’s adventures. Rumour has it, a haystack fire was started by John, but he adamantly denied this.

In his youth his love of sport grew, boxing, cricket, Arsenal football club and a real passion for golf, which led to being a caddie at Potters Bar Golf Club, and after each round he gave his earnings to his mum.

In 1954 at age of 15, John left school, and started his apprenticeship as a diamond polisher.

In 1959, John enlisted in the British army, joining the First Battalion Middlesex Regiment, Duke of Cambridges Own where his military record states: “An industrious, reliable, and hard-working man, trustworthy, honest, and sober, clean, and smart, should do well on return to civilian life.”

John served in Germany like Elvis Presley, which was his favourite line when chatting to the ladies.

On August 13, 1961, John was on duty in Berlin as a border guard and witnessed first-hand the erection of the Berlin Wall. John also saw combat service in the Middle East and as with many soldiers rarely spoke about this period in life.

Post-army, John returned to his apprenticeship

He was free and lived life to the full, dancing, clubbing, watching Arsenal, playing golf, and creating wonderful memories with his loved brothers and sister.

John wanted more adventure and to spread his wings, South Africa, Argentina, or Australia was the choice. On March 1, 1964, John arrived in Melbourne, after travelling through Beirut, Karachi, Kuala Lumper and Darwin. John had heard the golf courses in Melbourne were world class.

Continuing to apply his trade, John started travelling and experiencing new horizons, he loved the open air, and clear skies of his newfound land. 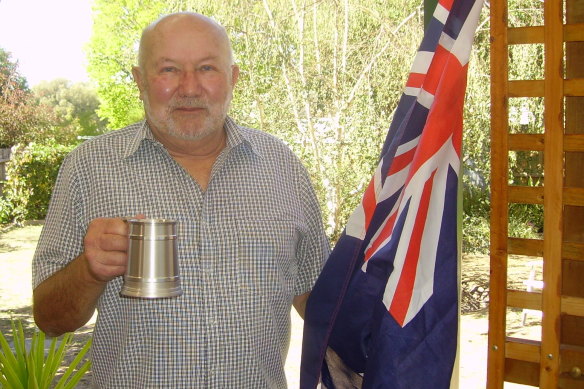 In 1965, John met his future father and brother-in-law at the Epping Hotel, and being the gentlemen that he is, he offered these two a lift home, where he met his wife to be Lillian at the front door.

Romance followed, and travels flourished across southern Australia. John and Lillian especially enjoyed a banana split at the local drive in.

On December 17, 1966, John and Lillian married at Wollert Methodist Chapel, shared by many who often commented on what was a beautiful country wedding.

In the years to follow, John took a shine to Lillian’s brothers Tommy and Tim, where he often took them on outings including fishing and football. It was here Tim was converted from Collingwood to North Melbourne.

Also, during this period John developed a strong bond with Lillian’s friends the Taylor family, Clarrie and Silve who took on John as their own son with a lifelong friendship. With Clarrie, the Early Woods Golf Club was a must every Sunday, and the Yarra Glen picnic races every January.

In 1972, John and Lillian moved to Diamond Creek, and in 1974 first son Kelvin was born, and in 1977 second son Gareth arrived. From this point onwards, John’s focus was his two boys. Supported by Lillian they raised their family on a diet of warmth and love, adventure, and experiences.

Always there to lend a hand at school working bees, local scout group and sporting clubs.

Diamond Creek was home, and the spirit of the community gave John so much.

With his boys, he taught them to fish, numerous life skills and ability to seize the day and achieve one’s dreams. Sport was ever present, attending North Melbourne games, Melbourne Victory, cricket, and golf tournaments. For many years, the MCG was second home to the McSweeney family. John’s love of horse racing extended to ownership with several winners, trained by Peter Moody and the Hayes family.

In 2004, John became an Australian citizen with his citizenship certificate pride of place in family home.

Family is John’s favourite word, and mealtime together was so important. Each Sunday or special occasion, all would gather being John and Lillian, Kelvin and Caz, Gareth, and Adrian and all the family pets.

Adrian and Caz were welcomed in the fold, with family travels shared and memories made.

On July 27 this year at the age of 83, John passed away peacefully at home in Diamond Creek in the arms of those close to him, Lillian, Kelvin, and Gareth.

He had been battling an aggressive cancer since the start of the year that became inoperable. John undertook six weeks of radiotherapy and then made the decision to be at home with those he loved.

He confronted his mortality with grace, style and dignity.