Supply teacher, 43, accused of hitting pupil on the shoulder with a pen before calling him ‘pathetic’ when he complained he was in pain is found not guilty of assault

A supply teacher who was accused of hitting a pupil on the shoulder with a pen before calling him ‘pathetic’ has been found not guilty of assault.

Mr Good was accused of assaulting the boy during a lesson – a charge he denied.

The school’s deputy headteacher told him to leave the classroom, before he was marched off the premises by another member of staff, the court heard.

Mr Good said he identified the complainant – who was sat on the front row in class – as a potential ‘troublemaker’ and a ‘cheeky chappie’.

The boy first asked Mr Good if he supported Manchester United and, after replying that he did, the pupil said that was ‘sad’.

The teacher accepted the youngster’s behaviour was ‘jovial’ at that point and ‘brushed off’ the jibe.

Mr Good told the court the first half of his lesson went okay until the boy – who cannot be named for legal reasons – began talking to his friend. 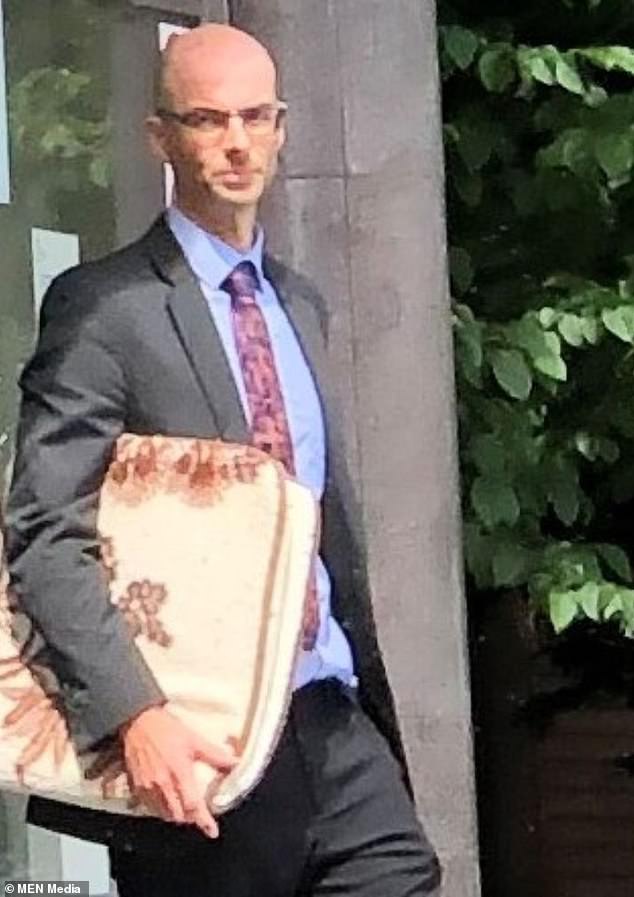 Michael Good (above), 43, from Leigh, appeared at Tameside Magistrates’ Court following the incident at a Greater Manchester school

He told the court he asked the youngster to ‘face the front’ and ‘stop talking’ on a number of occasions, but he continued.

At that point, Mr Good claimed he used a whiteboard pen to tap the boy on the shoulder in an effort to get his attention.

The boy, however, accused Mr Good of striking him on the shoulder. During evidence given to court via video link, he claimed the teacher hit him so hard he could still feel the pain for up to an hour.

He told the court he had been speaking to his friend ‘about questions that were set’ for the students to answer and that he saw Mr Good make contact with him from the ‘corner of my eye’. He added: ‘It wasn’t like really hard but it was, like, a bit.

The boy began to say ‘that hurt’, he told the court, to which Mr Good called him ‘stupid’ and ‘pathetic’ before ‘trying to mock’ him. Asked how it made him feel, the boy said: ‘Angry, upset.’

Mr Good denied hitting the boy. The court heard how the youngster had changed his story when telling different people what had happened.

The boy had not told the first teacher who saw him following the incident, before telling a second teacher Mr Good had ‘put his hand on my shoulder’ and only later describing it as a hit.

Mr Good admitted shouting at the youngster and making him feel ‘embarrassed’, telling him he was ‘acting like a loser’.

During a police interview, he told officers he had ‘clocked’ the boy as ‘someone to keep an eye on’, and that the boy had ‘intended to frighten him’ – having already coughed to pretend he was suffering from Covid.

Mr Good told the court he only ‘raised his voice’ at the boy after he had begun falsely suggesting he had been assaulted – with the boy telling his friend he would ‘tell his dad’ about what happened and ‘get him done for assault’. 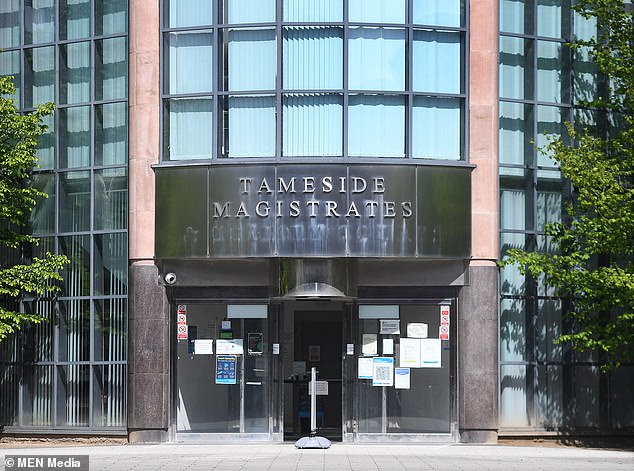 Mr Good was accused of assaulting the boy during a lesson – a charge he denied. Pictured: Tameside Magistrates’ Court

He said: ‘I think he was trying to wind me up and, unfortunately, he succeeded.

‘I ended up raising my voice, I called him pathetic and then I mimicked him. I regret it – I should not have said that to the child.’

The court heard evidence from a head of department at the school – the first teacher the boy spoke to following the incident – who was teaching in another classroom nearby when she heard Mr Good raise his voice.

She told the court: ‘I heard a raised voice saying “shut up, shut up, be quiet, are you stupid?”. It was very firm, very shouty… very condescending.’

She told the court she visited Mr Good’s classroom to see what was going on before seeing the boy ‘absolutely sobbing’ – while the boy claimed he began to cry after he left the classroom.

The head of department said she told the boy to wait outside before asking a pupil to get the attention of another staff member, recommending that they get Mr Good to leave the class. She suggested Mr Good had a ‘very angry face’ and a ‘disgusted look’.

Mr Good told the court he continued teaching for around five minutes until another member of staff arrived and told him to leave.

He said he was not given a chance to tell his side of events as he was escorted from the building.

Summing up her case, prosecutor Eleanor Myers suggested Mr Good was ‘maybe pushed to his wit’s end’ at the time of the alleged altercation because he was trying to impress his potential employers and had already been told to keep the noise down.

She added: ‘If he is someone who can snap in the way he did, my assertion is he can snap in other ways and he is not a gentle man.’

Mr Good, who has no previous convictions, rejected the prosecution’s case of assault and even expressed his shock at how far the case had got in the legal system. ‘This has been blown out of proportion,’ he said.

‘This is crazy that I’m stood here, let me tell you that.’ Mr Good added: ‘I am a gentle man, I would never hurt a child. I would tap somebody so light they might not even feel it.’

Defending, Craig Hunn insisted the bench ‘cannot be certain’ his client had assaulted the teenager from the evidence given.

He said: ‘This is not an employment tribunal, it’s a criminal court. It is conceded that Mr Good’s behaviour was not all that it could be.

‘In retrospect he regrets the language he used, he regrets some of his behaviour. But that does not mean that he committed common assault.’

Mr Hunn also read a character reference from a member of staff at Great Academy Ashton, where Mr Good is now working as a tutor helping pupils to catch up following the disruption caused by coronavirus.

In the statement, Mr Good was described as an ‘integral member of the team’ with ‘positive’ feedback from staff and students.

The bench acquitted Mr Good insisting the evidence from the complainant was ‘vague and inconsistent’.