With a hungry hawk ready to pounce and turn him into its dinner, this squirrel couldn’t afford to make a meal of his escape.

In the absence of a nearby burrow or tree, the rodent found a novel solution – squirrelling himself away in the wheel arch of the nearest car.

His nemesis perched just inches away on the vehicle’s roof, the squirrel held his nerve for around half an hour before the red-tailed hawk flew off.

The stand-off was spotted by university worker Allison Berdoulay, 54, in Nottingham, Pennsylvania.

She said: ‘The squirrel’s so clever. He made sure the coast was clear before popping out.’ 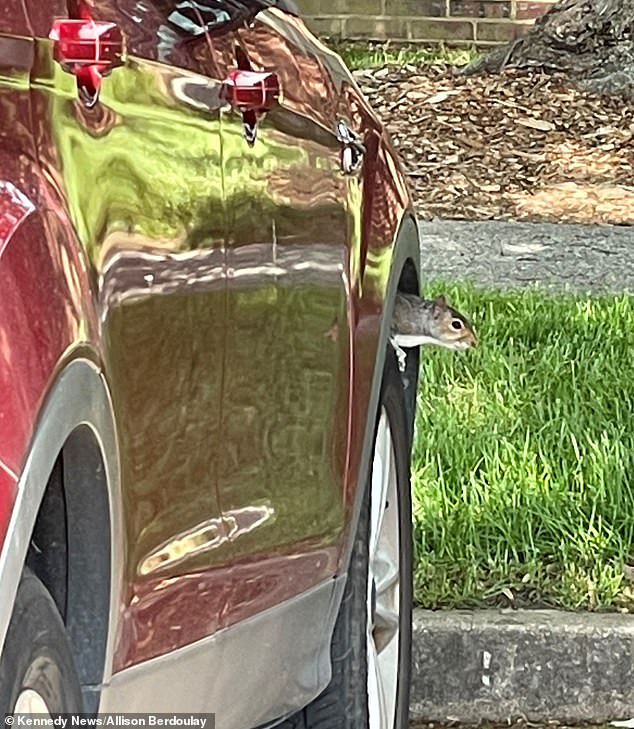 In the absence of a nearby burrow or tree, the rodent found a novel solution – squirrelling himself away in the wheel arch of the nearest car

Allison was nipping out for groceries when she spotted the striking moment on her way home from work.

The 54-year-old quickly wound down her window and snapped a shot of what she thought was just a red-tailed hawk – but later spotted the ‘clever’ squirrel peeping out from above the car’s wheel.

Driving past 15 minutes later after visiting the shops, Allison spotted the gutsy rodent holding his nerve and ground – only fully poking his head out after the predator had flown off. 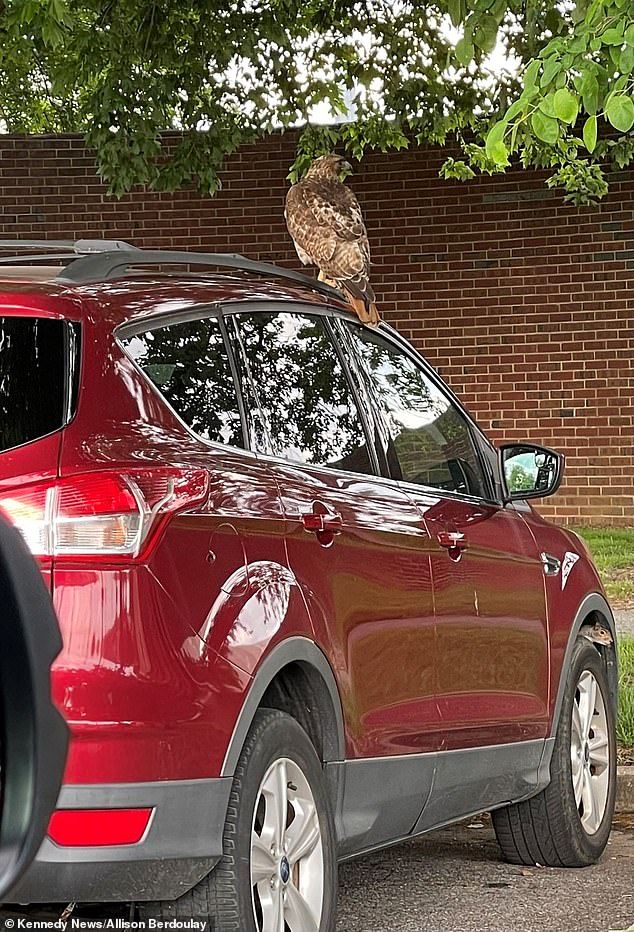 His nemesis perched just inches away on the vehicle’s roof, the squirrel held his nerve for around half an hour before the red-tailed hawk flew off

Now the project co-ordinator has shared the images online and received more than 1,900 reactions, 415 shares and 121 comments from delighted social media users.

The mum-of-one claims she didn’t initially spot the squirrel hiding from the predator – only realising later that day that it had been there all along.

Allison said: ‘I was driving to a shop to get some supplies and I saw the hawk.

‘I stayed for a moment and then the hawk started to fly off. After I ran my errands, I went back to see if it was still there.

‘I wanted to make sure it wasn’t hurt and wondered why it was sitting on the car, then I saw the little squirrel peeking out of the wheel well.

‘It’s like the squirrel is hiding from the hawk. Some friends posted they were glad it escaped.

‘The squirrel was there for quite a while, I was gone for about 15 minutes.

‘I love birds and love taking photos. I stopped and rolled down the window to take a picture with my phone.’

After posting the images online, Allison claims her friend said she should enter it into a photography competition.

Allison said: ‘I thought it was a great story and I loved sharing.

‘I’m surprised. I showed people on my phone and they thought it was great. They said I should enter it into a contest.’

Allison’s video then attracted more than 100 comments from people, many of whom were ‘rooting’ for the squirrel and hoping he made it out alive.

Another commenter said: ‘He’d better hide there a long time.’

A nature photographer said: ‘A game of hide and seek.’

A woman who was also duped by the squirrel said: ‘What an awesome shot! I didn’t see the critter hiding in plain sight until I read your post.’