Washington: Last December, Bahrain became one of the first countries to throw support behind China’s Sinopharm vaccine, granting it emergency use approval – a substantial boost for Beijing’s global ambitions for the vaccine, despite doubts on the part of some scientists over lack of public safety and efficacy data.

Now, the Persian Gulf country is the latest to raise doubts about the vaccine’s effectiveness.

Bahraini officials said this week that it would be offering Pfizer-BioNTech doses to certain high-risk individuals who have already received two Sinopharm jabs, suggesting that they no longer saw them as enough in the face of a new wave of coronavirus infections. 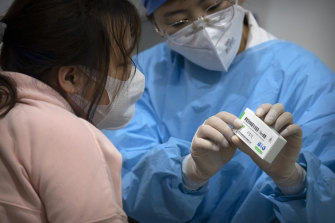 A medical worker shows a person the packaging for a Sinopharm vaccine at a vaccination facility in Beijing. Some countries have seen a rise in COVID cases after two doses of the vaccine and are recommending a third shot of a different vaccine.Credit:AP

The policy comes just weeks after the World Health Organisation granted Sinopharm emergency use listing, making it the first Chinese-developed vaccine to receive the global health body’s stamp of approval.

The vaccine, developed by Sinopharm with the Beijing Institute of Biological Products, makes up a significant chunk of China’s own supply for domestic use. Though slow to start, the country’s vaccination drive is ramping up, with officials suggesting 80 per cent of the population could be immunised by the end of the year.

In Bahrain, however, a vaccination drive that relied heavily on Sinopharm has so far produced at best mixed results and failed to curb new cases.

In Bahrain, however, a vaccination drive that relied heavily on Sinopharm has so far produced at best mixed results and failed to curb new cases.

Almost 50 per cent of the country has been fully vaccinated, according to The Washington Post’s tracking, but the country has seen its worst wave of cases yet in the past few weeks, and the government has implemented a two-week lockdown in a bid to tame it.

Some 1936 new cases were reported on Thursday, according to the Bahrain News Agency, bringing the total cases in the country of 1.6 million to more than 240,000, and more than 1000 deaths.

Waleed Khalifa al-Manea, Bahrain’s undersecretary of health, told the Wall Street Journal in an article published Thursday that people fully vaccinated with Sinopharm who were over 50, with chronic illnesses or obese were being urged to get a booster of Pfizer-BioNTech six months after their last Sinopharm shot.

Bahrain and neighbouring United Arab Emirates – which also relied heavily on Sinopharm for their rapid vaccine rollouts – had previously announced they would offer some people third-dose Sinopharm booster shots starting in mid-May, after studies showed that they had not developed sufficient antibodies. 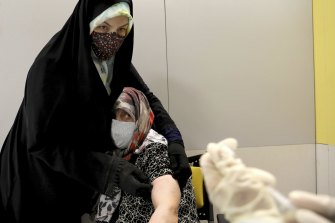 An Iranian woman receives a Sinopharm vaccine for COVID-19 at a shopping centre in Tehran.Credit:AP

In Bahrain, residents can use an app to book their booster shots. Though they can choose either Sinopharm or Pfizer-BioNTech doses, those who meet certain risk groups would be advised to get the latter.

Sinopharm representatives did not respond to a request for comment.

A surge in cases in the Seychelles provided a “critical case to consider the effectiveness of some vaccines and what range we have to reach to meet herd immunity,” Yanzhong Huang, a senior fellow for global health at the Council on Foreign Relation, told The Washington Post at the time. A WHO report on Seychelles reported the doses administered 57 per cent were Sinopharm and 43 per cent were Covishield.

A WHO panel report last month found the Sinopharm vaccine had a 79 per cent efficacy rate in stopping symptomatic COVID-19 in adults between 18 and 59, citing evidence from clinical trials in China, Bahrain, Egypt, Jordan and the United Arab Emirates.

While that efficacy was in the same range as that of a vaccine produced by AstraZeneca, it was considerably lower than that of the Pfizer-BioNTech and Moderna vaccines, which have reported efficacy of more than 90 per cent.

Unlike those vaccines, which use new mRNA technology to train the bodies immune system using a snippet of virus code, Sinopharm’s uses an inactivated version of the virus to do the same – an older, though well-established, technology.

The WHO panel also cautioned that they had a “low level of confidence” in the vaccine’s efficacy in people 60 and older, and a “very low confidence” about potential side effects in that age group, due to a lack of data.

Despite the concern about Sinopharm’s effectiveness, experts say that the vaccine still works as intended in most cases and that it could play a significant role in shortages of vaccine doses around the world.

This week, millions of Sinopharm doses rolled off the production line in Beijing, intended to play a major role in the United Nations-backed vaccine sharing program COVAX, amid persistent shortages. Sinopharm officials said they hoped to distribute more than 1 billion doses outside China in the second half of 2020.

Separately, the WHO granted emergency use listing to another Chinese vaccine, CoronaVac developed by Sinovac, this week reporting that the vaccine prevented symptomatic disease in 51 per cent of those vaccinated and prevented severe cases in 100 per cent of the population.

However, officials said there was not enough data to estimate the Sinovac vaccine’s efficacy in those over 60.