Marcos, who won last week’s election by a landslide, said he held “very substantial” talks by phone on Wednesday with Chinese President Xi Jinping, who assured him of support for his “independent foreign policy”, and agreed to hold more comprehensive discussions. 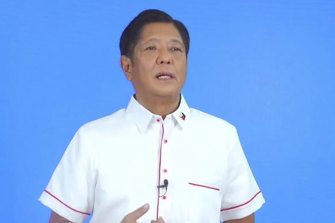 The 64-year-old son and namesake of the notorious former dictator said Xi also acknowledged his late father’s role in opening diplomatic relations between China and former US colony the Philippines.

“The way forward is to expand our relationship not only diplomatic, not only trade, but also in culture, even in education, even in knowledge, even in health, to address whatever minor disagreements that we have right now,” Marcos said in a statement.

“I told him, we must not allow what conflicts or difficulties we have now between our two countries to become historically important.”

The Philippines and China have had a rocky relationship in recent years over Beijing’s vast territorial claims and conduct of its coast guard and fishing fleet in the South China Sea, through which at least $US3.4 trillion of annual trade passes.

Many analysts expect Marcos to seek stronger ties with Beijing, but say maintaining close relations with defence ally Washington will be essential in keeping the military and the public onside in a country with historically strong links to the United States.

Their phone conversation focused on bilateral ties and regional development, the Chinese embassy in Manila said in a separate statement.

Xi said both countries should carry forward their friendship, grasp the general trend and follow through the blueprint for bilateral friendly cooperation, the embassy added.

Marcos won the presidency with nearly 59 per cent of the votes last week. He will take office late in June. Immediately after his election, Marcos travelled to Melbourne for a private visit with his son.

China was among the first to congratulate Marcos, who was the first win a presidential election by an outright majority since a 1986 revolution that toppled his late father’s two-decade dictatorship.

Kurt Campbell, the White House coordinator for the Indo-Pacific, last week said the United States would seek early engagement with the Marcos administration, but said there were “historical considerations” that could pose challenges.

Marcos said Xi had expressed a desire to talking privately.

“We are both looking forward to having further dialogue,” Marcos said.

“He said both of us should talk, without the others.”