A Roman Catholic bishop from Rhode Island is facing backlash for a tweet labeling LGBTQ Pride Month events as “especially harmful for children” and arguing that those who follow the faith should not support them.

Bishop of Providence Thomas Tobin sent the message on Saturday, the first day of LGBTQ Pride Month and argued that the events in the honorary month “promote a culture and encourage activities that are contrary to Catholic faith and morals.”

This year’s Pride Month commemorates the 50-year anniversary of the Stonewall Riots in New York City, which launched the gay rights movement. 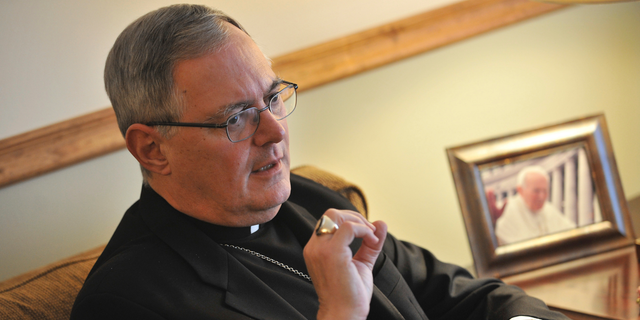 A <a data-cke-saved-href="https://www.foxnews.com/category/us/religion/roman-catholic" href="https://www.foxnews.com/category/us/religion/roman-catholic" target="_blank">Roman Catholic</a> Bishop is facing backlash for a tweet labeling LGBTQ Pride Month events as "especially harmful for children" and arguing that those who follow the faith should not support them.<br data-cke-eol="1">
(AP Photo/Josh Reynolds, File)

The largely hostile response to Tobin’s tweet prompted him to trend on the social media site and thousands of users have responded since. On Sunday, he released a statement saying he regretted that his comments “turned out to be so controversial in our community, and offensive to some, especially the gay community.”

“That certainly was not my intention, but I understand why a good number of individuals have taken offense,” Tobin continued. “I also acknowledge and appreciate the widespread support I have received on this matter.”

Tobin said that the Catholic Church has “respect and love for members of the gay community, as do I … As a Catholic bishop, however, my obligation before God is to lead the faithful entrusted to my care and to teach the faith, clearly and compassionately, even on very difficult and sensitive issues.”

As Pride Month celebrations ensue, Tobin said he would be “praying for a rebirth of mutual understanding and respect in our very diverse community.”

Joe Lazzerini, the president of Rhode Island Pride told WPRI that the LGBTQ community has a number of Catholic supporters in the area.

“There are Catholics all across Rhode Island who support the LGBTQIA+ community and I honestly think that it’s shameful that Bishop Tobin is resorting to these attacks on the first day of pride month, on the 50th anniversary of Stonewall,” Lazzerini said.

“Pride isn’t harmful, love is not harmful, it’s 2019,” Lazzarini said. He told the Boston Globe that he was “flabbergasted” by Tobin’s statements, and found his assertion that Pride events are harmful to children especially offensive given the Catholic church’s history of rampant child abuse.

Tobin, who has headed the Providence diocese since 2005, has expressed conservative views on sexuality before. In May 2012, he described President Barack Obama’s support for same-sex marriage as “a sad day in American history.”