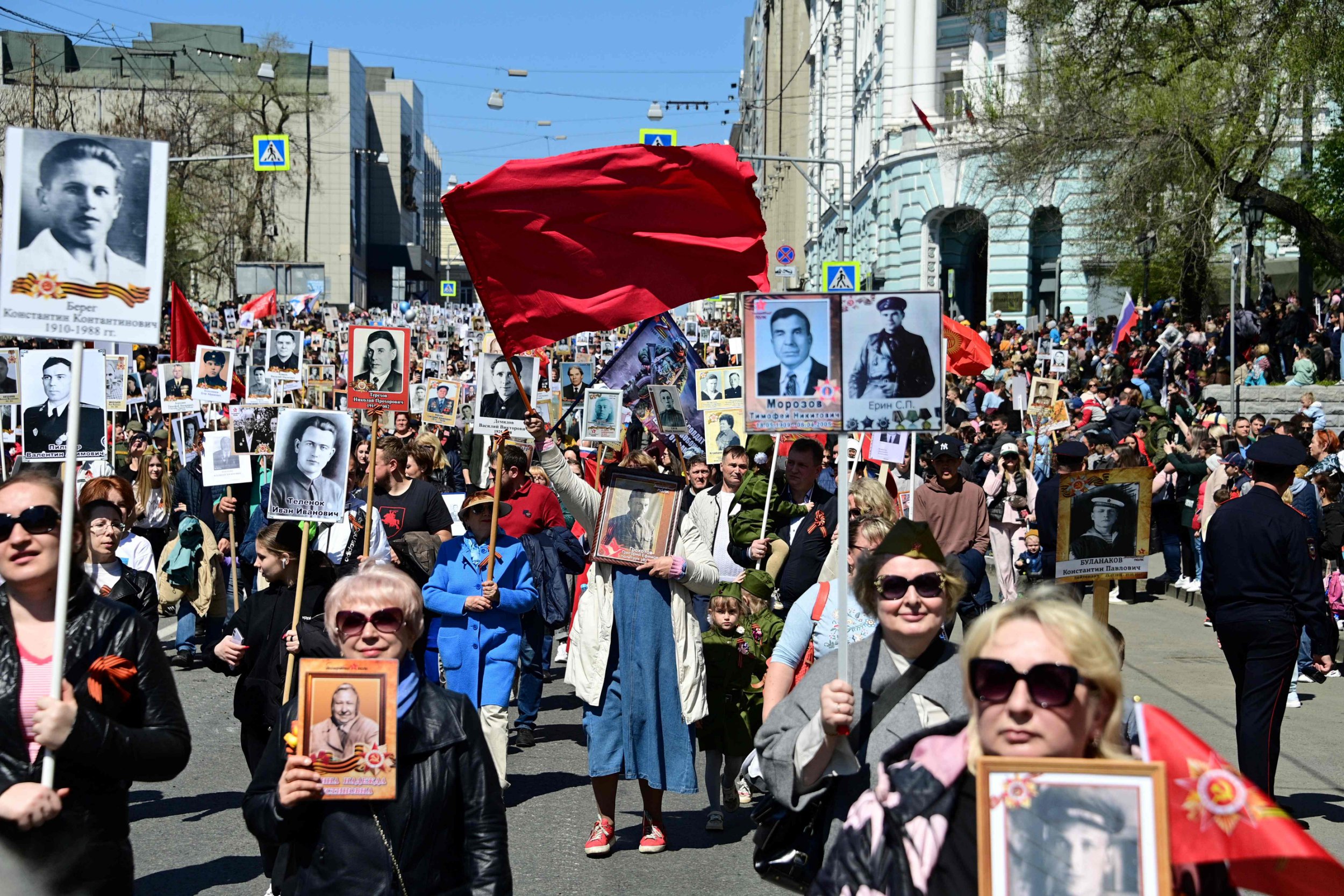 Vladimir Putin is expected to use Victory Day in Russia to rally support for the invasion of Ukraine and claim the war a success.

The Russian president will oversee celebrations in Moscow’s Red Square and may use the anniversary of the Soviet Union’s victory over Nazi Germany to reframe the conflict.

So far the Kremlin has only called the fighting ‘a special military operation’ but some Western officials believe Putin may use today to formally declare war.

The declaration would enable the president to announce a total mobilization of the population to boost troop numbers for an offensive.

While the invasion of Ukraine means fewer Russian tanks and other military hardware will be available for the official parades in Red Square, patriotic fervour is expected to be as strong as ever.

This year’s fly-past over St Basil’s Cathedral will include supersonic fighters and strategic bombers.

It is also expected to include the Il-80 ‘doomsday’ command plane, which would carry Russia’s top officials in the event of a nuclear war.

The displays of patriotism will come after Russian forces have appeared to increase their assault on Ukraine, including by bombing a school being used as a shelter for civilians.

More than 60 people were feared dead yesterday after a Russian bomb flattened a school building in eastern Ukraine.

Authorities said about 90 people were sheltering in the basement of the building in the village of Bilohorivka, when it was struck.

Emergency crews found two bodies and rescued 30 people, but ‘most likely all 60 people who remain under the rubble are now dead,’ Serhiy Haidai, governor of Luhansk province, wrote on the Telegram messaging app.

Russian shelling also killed two boys, aged 11 and 14, in the nearby town of Pryvillia, Haidai said.

Luhansk is part of the Donbas, the industrial heartland in the east that Russia’s forces are working to capture.

Ukrainian president Volodymyr Zelenskyy and others had warned in recent days that Russian attacks would only worsen in the lead-up to Victory Day, and some cities declared curfews or cautioned people against gathering in public.

Russian forces have also increased their assault on the southern port city of Mariupol, which has been heavily bombarded since the start of the war.

Ukrainian fighters in the Azovstal steel plant have rejected deadlines set by the Russians for laying down their arms even as attacks continued by warplanes, artillery and tanks.

The deputy commander of the Azov regiment holed up in the plant has pleaded with the international community to help evacuate wounded soldiers.

‘We will continue to fight as long as we are alive to repel the Russian occupiers,’ Captain Sviatoslav Palamar told an online news conference.

The last of the civilians taking shelter with fighters at the factory were evacuated on Saturday.

They arrived on Sunday night in Zaporizhzhia, the first major Ukrainian city beyond the frontlines, and spoke of constant shelling, dwindling food, ubiquitous mould – and using hand sanitizer for cooking fuel.

Russia-Ukraine war: Everything you need to know

Since Russia’s invasion of Ukraine began on February 24, the country has suffered widespread damages and loss of life amid a major bombing campaign.

Millions of people have fled the country, with thousands of British people opening up their homes to Ukrainian refugees.

During the course of the war, Ukraine’s President Volodymyr Zelensky has remained in Kyiv, despite the Ukrainian capital being subjected to a barrage of bombing.

Zelensky has continuously pushed for aid and support from world leaders, as well as pressing for fast-tracked NATO membership.

Meanwhile, Russia’s President Vladimir Putin has been widely condemned for his attack on Ukraine.

His actions have been met by harsh economic sanctions, bans from competing in major sporting events, and countries moving away from using Russian oil.