WARSAW (Reuters) – Poland’s eurosceptic leaders marked a century of national independence on Sunday as more than 200,000 people marched through the capital in a parade involving far-right groups and neo-fascist activists from Italy. 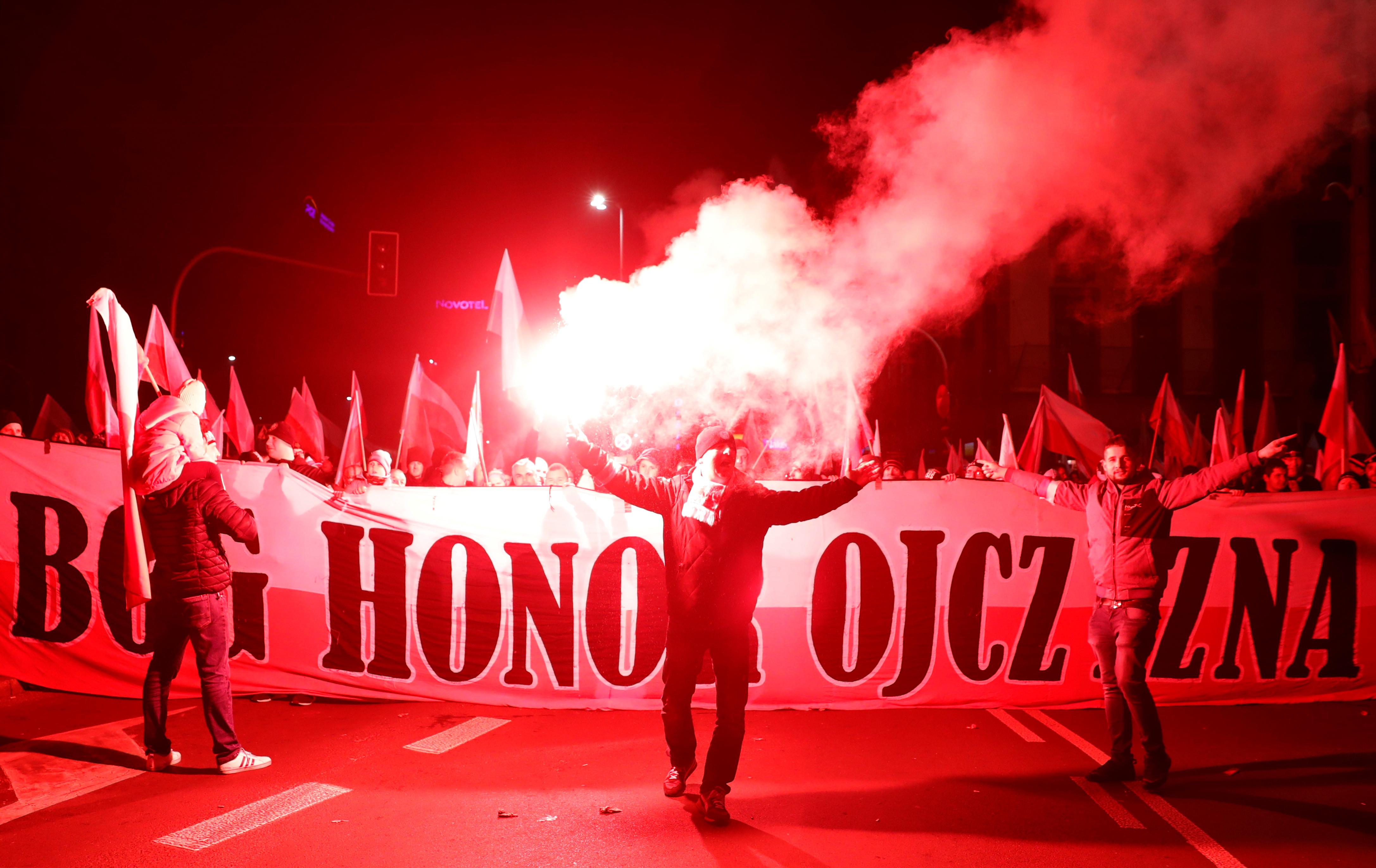 The march is a focus of debate about whether the ruling Law and Justice Party (PiS) tacitly encourages groups with roots in the fascist and anti-Semitic movements. The party won power in 2015 and Poland has since become increasingly isolated in Europe amid accusations of a tilt towards authoritarian rule.

Some marchers in Warsaw chanted: “Away with the EU” but there was no sign of white supremacist banners visible at last year’s march.

Government officials walked at a distance from the main marchers, away from any overt displays of nationalism, and they were kept separate by security forces.

“Thank you for coming here, for Poland, and for bringing the white and red (Polish) flag which saw our fathers, grandfathers and great-grandfathers spill their blood,” President Andrzej Duda, a PiS ally, said at the start of the march.

“There is space for everyone under our flags,” he said.

Some chanted: “Pride, pride, national pride” and “Yesterday it was Moscow, today it is Brussels, stripping us of our sovereignty.”

Warsaw’s city mayor sought to ban a far-right march held on Nov. 11 annually for almost a decade but a court overruled her.

The government then agreed with organizers after last-minute talks to hold a joint event to mark a 100 years since Poland’s 1918 declaration of independence after an 18th century partition by Russia, Austria and Germany.

“It was the biggest march of free Poles in a free Poland ever,” government spokeswoman Joanna Kopcinska told state PAP news agency.

Last year, the annual far-right march was dotted with racist banners such as “pure blood, clear mind” and “Europe will be white or uninhabited”.

Those slogans fueled concern about the rise of xenophobia in Poland at a time when other European countries are also grappling with a resurgence of the far right.

PiS says it rejects anti-Semitism and racism but critics accuse it of quietly siding with the far-right.

While insisting Poland should remain in the EU, PiS refuses to allow immigrants from the Middle East and North Africa into the country, and says more decision-making power should be moved from Brussels to national capitals.

The party taps into frustration with liberal values and anti-establishment sentiment that has galvanized far-right voters in other parts of Europe. It promises more Catholic faith and patriotism in public life and more state say in the economy.

“Remember the shameful slogans of last year’s Nov. 11 march?,” centrist lawmaker Marcin Kierwinski said on Twitter on Saturday. “A year later, their authors are meeting with the president and prime minister instead of a prosecutor.”

Some participants carried banners with religious and anti-abortion images.

“The organizers of the Independence March … are great patriots. In our times, the youth wasn’t this patriotic,” said Teresa Radzikowska, a 70-year-old retiree from central Poland who attended the march.

Before the late-night agreement with the government on Friday to hold a joint event, organizers had said they expected the march to be the biggest far-right event in Europe in years. 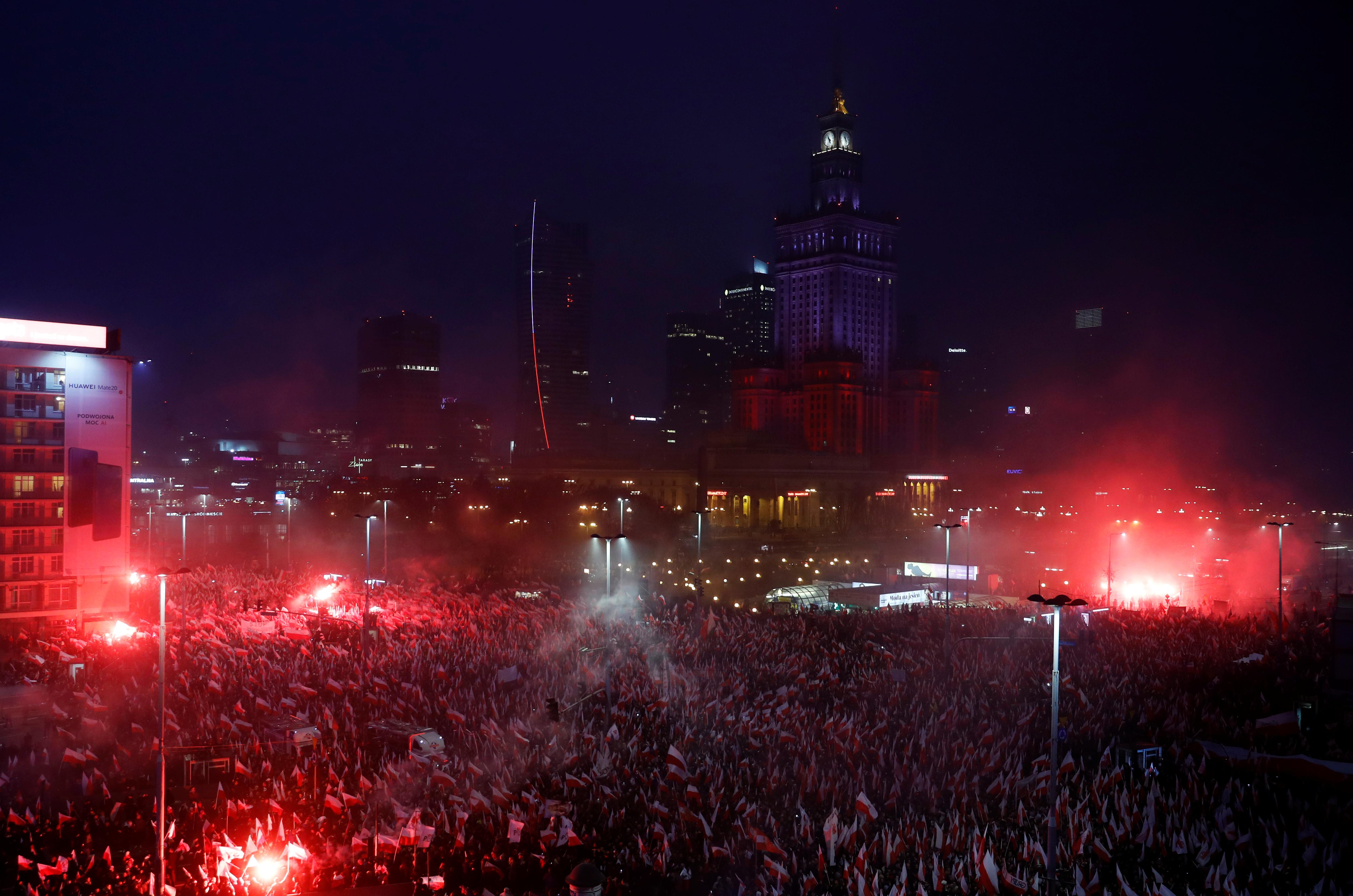 One foreign participant said he came to Warsaw because Poland “had not lost its national identity.”

“You’ve not bowed down to Islam and you’re not bowing down to globalism either,” said James Goddard, who traveled from Leicester in central England just for the march.

On Nov. 11 Poles commemorate the establishment of the second Polish republic in 1918 from territory seized by its eastern and Western neighbors in the 18th century, made possible by the defeat of Russia, Germany and Austria in World War One. World leaders gathered in Paris on Sunday to mark the end of the war.