PM and Biden insist they're in 'complete harmony' on Northern Ireland

Emmanuel Macron vowed to veto any attempt to renegotiate the Northern Ireland Brexit deal as the ‘sausage war’ deepened last night – but Boris Johnson and Joe Biden insist they are in ‘complete harmony’ on the issue.

The French president said it was ‘not serious’ to want to review the post-Brexit trade rules this month, because ‘nothing is renegotiable’.

‘I think it’s not serious to want to review in June what we finalised after years of debate and work in December,’ he said, adding that he will discuss the Brexit agreement with Mr Johnson during a bilateral meeting at the G7 summit today.

Claims of a row over the Northern Ireland Protocol and the post-Brexit trading relationship between the UK and the EU had threatened to overshadow the G7.

The two countries’ leaders were forced to insist they were in ‘complete harmony’ over Northern Ireland – despite explosive claims of an extraordinary eve-of-summit diplomatic row.

It came amid the ‘sausage war’ with the EU over Brussels’ threats to retaliate if Britain takes unilateral action to continue the flow of British-produced chilled meats to Northern Ireland when a grace period ends this month. 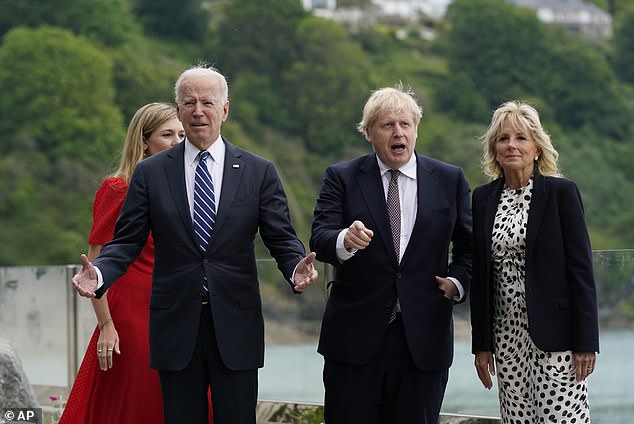 Britain accused the EU of adopting a ‘purist’ approach to the Brexit withdrawal deal in Northern Ireland amid warnings that sales of sausages from the rest of the UK could be blocked.

Government will ‘stand up for the British sausage’

The UK Government will ‘stand up for the British sausage and no-one will ever be able to destroy it’, a trade minister has insisted.

Conservative frontbencher Ranil Jayawardena made the pledge amid a row between the EU and the UK over the meat product.

Brussels has threatened to launch a trade war against Britain if it fails to implement checks on goods entering Northern Ireland under the terms of the Brexit ‘divorce’ settlement.

UK Brexit Minister Lord Frost also refused to rule out the prospect that the UK could unilaterally delay imposing checks on British-made sausages and other chilled meats due to come into force at the end of the month.

Speaking in the Commons, Labour’s Paula Barker (Liverpool, Wavertree) said: ‘Can I ask the ministers to impress on their Cabinet colleagues the need to resolve these delays and press for a speedy resolution in order to facilitate efficient trade across borders?’

Mr Jayawardena replied: ‘We have called for pragmatism in this area.

‘We are a sovereign nation, we are British and we are proud of it, and we are going to stand by every corner of this country as we deliver trade benefits and create jobs.

Commons Leader Jacob Rees-Mogg said sausages ‘are important and they may be a nice thing to have for breakfast’, before adding: ‘But the scandal is that the European Union takes it upon itself to think that life-saving cancer drugs may not go freely between Great Britain and Northern Ireland.

He added: ‘We should be absolutely clear that the protocol was there to respect the integrity of the United Kingdom as well as to help the single market.

‘They can’t have one side but not the other.’

Ahead of fresh talks on Wednesday to try to resolve the continuing differences over the implementation of the Northern Ireland Protocol in the agreement, Downing Street urged Brussels to show ‘common sense and pragmatism’.

The appeal came after European Commission vice president Maros Sefcovic said the EU would act ‘swiftly, firmly and resolutely’ if the UK tried to backtrack on its obligations under the deal.

It came amid reports Britain is ready to act unilaterally to delay imposition of checks on chilled meats such as sausages and chicken nuggets coming to Northern Ireland from Great Britain when the current ‘grace period’ expires at the end of June.

While the Prime Minister’s official spokesman refused to be drawn on what steps the Government would take if there was no agreement by that point, he insisted there was no justification for barring chilled meats from Northern Irish shops.

‘Any ban would be contrary to the aims of the protocol and the interests of the people of Northern Ireland,’ the spokesman said.

‘The protocol was a compromise. We didn’t expect the EU to take a purist approach when implementing it. We are working very hard to try to resolve these issues consensually.

‘The Prime Minister has always made clear we will consider all our options in meeting our responsibility to sustain peace and prosperity in Northern Ireland.

‘We hope that the EU will show the common sense and pragmatism needed to make progress.’

His comments came after Environment Secretary George Eustice dismissed the idea of controls on the movement of chilled meats between the rest of the UK and Northern Ireland as ‘bonkers’.

‘I think that’s a nonsense. I think we’ve got a very good sausage industry in this country, we’ve got the highest standards of food hygiene in the world,’ he told LBC.

Earlier, Mr Sefcovic raised the prospect of a trade war – with Brussels imposing tariffs and quotas on British exports – if the UK failed to meet its international obligations under the the Northern Ireland Protocol.

The deal – intended to ensure there is no return to a hard border with the Republic – means that Northern Ireland remains part of the EU single market, which in turn requires checks on some goods coming from Great Britain.

But Mr Sefcovic – who will hold talks with Brexit minister Lord Frost on Wednesday – said there had been ‘numerous and fundamental gaps’ in the UK’s implementation of the agreement.

Writing in The Daily Telegraph, he said that if Britain took further unilateral actions the EU ‘will not be shy in reacting swiftly, firmly and resolutely to ensure that the UK abides by its international law obligations’.

Asked yesterday if the President had made his alarm about the situation with the Northern Ireland Protocol clear, Mr Johnson said simply: ‘No, he didn’t.’

He added: ‘What I can say is that America – the United States, Washington – the UK, plus the European Union, have one thing we absolutely all want to do and that is to uphold the Belfast Good Friday Agreement and make sure we keep the balance of the peace process going. That’s absolutely common ground and I’m optimistic that we can do that.’ 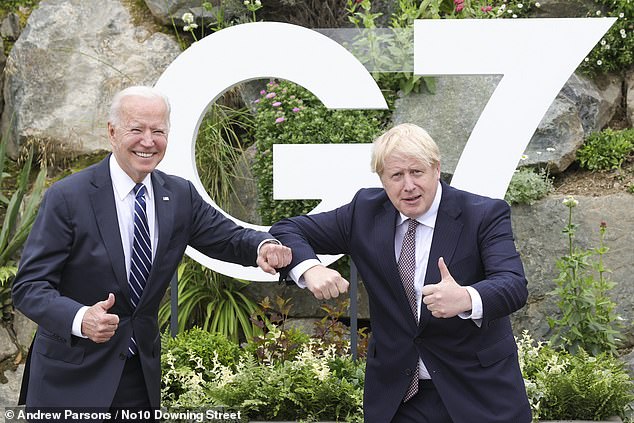 Meanwhile, a senior US administration official also tried to play down the row yesterday, insisting that the President had not come ‘to give a lecture’ on the issue.

‘We are instead a strong and vigorous supporter of practical, creative, flexible, results-oriented negotiations that, at the end of the day, produce a result that protects all of the gains that the people of Northern Ireland have made.

The Prime Minister raised the case of teenage motorcyclist Harry Dunn in his first face-to-face meeting with Joe Biden.

Boris Johnson reiterated that the UK wants justice for Harry, 19, who was killed when a car on the wrong side of the road crashed into his motorbike outside RAF Croughton, a US intelligence base in Northamptonshire, in August 2019.

Anne Sacoolas, the wife of a US intelligence official at the base, was charged with causing death by dangerous driving but had sought diplomatic immunity and returned to the US, sparking an international controversy. The Dunn family said they were ‘very pleased’ to see the case raised at the ‘first available opportunity’.

They have challenged Mrs Sacoolas’s immunity, which will be heard in the Court of Appeal next year. Mr Dunn’s parents have also brought a civil claim against the suspect and her husband in Virginia in the US.

‘It will not be confrontational or adversarial or… he didn’t come here to give a lecture. He came merely to communicate what he believes very, very deeply about peace in Northern Ireland.’

It was alleged yesterday that Mr Biden had ordered officials to issue a rare diplomatic rebuke to the UK only last week over its continued opposition to the full implementation of the Protocol.

It was reported that Yael Lempert, America’s most senior diplomat in Britain, had told Lord Frost, the Brexit minister, that the Government was ‘inflaming’ tensions with its opposition to checks at Northern Irish ports.

Minutes of the meeting on June 3 were said to have revealed that Lord Frost was told of Mr Biden’s ‘great concern’ over his stance.

It was said to have resulted in a ‘demarche’ – a formal diplomatic communication or protest.

The disclosure of Mr Biden’s apparent protest sparked anger in some quarters yesterday, with new DUP leader Edwin Poots saying that the President’s alleged intervention was ‘not well informed’.

He accused America of potentially ‘ignoring’ problems with the Protocol. Mr Poots warned BBC Radio 4’s Today programme: ‘America may be prepared to drive a coach and horses through the Good Friday Agreement.’

A Whitehall source played down the significance of the demarche, saying it was ‘not uncommon’ for allies to voice their disagreements in diplomatic notes.

There was irritation at the leaking of the note, with some suspecting it was done by anti-Brexit officials to damage the Government.

Brexiteer MP Peter Bone said: ‘If he is just urging a resolution of the dispute, that’s fine – we want a resolution. But he should not be taking the EU’s side.’

Pro-Remain Tory MP Tom Tugendhat said: ‘I’m surprised that the President decided to enter this debate so publicly at a very sensitive time for all parties.’

But Irish premier Micheal Martin said Mr Biden’s rebuke was a call to do the ‘sensible thing’ and resolve trade issues with the EU.