Case numbers in the state are usually lower on Mondays and Tuesdays, as they reflect tests taken over the weekend. 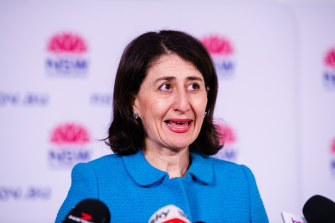 “Our double dose has been confirmed now at 60 per cent: we are literally just a few weeks away from having that 70 per cent double dose,” the Premier said.

The state has recorded 12 deaths since yesterday’s update: four people in their 60s, two in their 70s, four in their 80s, and two in their 90.

Six of the deaths were not vaccinated and five had received one dose of a vaccine. At present, there are 1155 patients in NSW hospitals, with 214 in ICU.

On Monday, the NSW government has given an outline of what life will be like in the state when it hits 80 per cent full vaccination.

The government last month outlined a road map for restrictions when 70 per cent of the state’s population aged 16 and over was double-dosed – a milestone projected for next week – although said these freedoms for the fully vaccinated could be subject to change.

Based on the current average dose interval of vaccinations in NSW, the state could hit 70 per cent second dose coverage as early as October 6.

Speaking on 2GB radio earlier this morning, Deputy Premier John Barilaro warned there would be a “stark difference” between restrictions for the fully vaccinated and others, noting there was no promise people who had not been vaccinated would enjoy the same freedoms.

“If you want the freedoms we are talking about right across the board you’re going to have to be vaccinated,” he said.

Last week, there were reports regional travel would be moved from the 70 per cent road map to the 80 per cent, after northern NSW MPs expressed concern about tourism recommencing before their population had the same level of vaccination as Sydney.

Vaccination rates released by the federal government last week showed a 30 percentage point difference between coverage in Byron Shire and a number of Sydney councils.

There were 705 new local cases and one death from COVID-19 reported in Victoria on Monday.