Auckland: New Zealand has reported five new cases of COVID-19, with four in the community and one imported.

The four new community cases are linked to the wider Auckland August cluster and are epidemiologically linked to the Mt Roskill Evangelical Church “mini-cluster”. 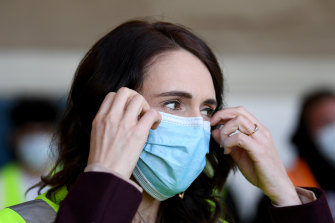 The imported case is a man in his 20s who arrived from India on August 23. He is a close contact of an existing confirmed case.

On Sunday, the government also announced mandatory regular testing of border-facing workers, who could be fined if they refuse.

The total number of active cases in New Zealand is now 116, with 77 community cases and 39 imported cases in managed isolation and quarantine (MIQ).

A Christchurch person who was under investigation has since tested negative for COVID-19, the Ministry of Health said.

On Sunday, the Government announced a new range of changes to further strengthen the borders.

From midnight, there will be a Required Testing Order which enables the introduction of ongoing, routine, mandatory COVID-19 testing for all border workers.

Anyone who does not comply or refuses to be tested could be fined.

Workers at managed quarantine facilities, community testing centres and workers who transport those to quarantine will be required to undergo testing once a week.

On Saturday, laboratories nationally processed 7178 tests for COVID-19, bringing the total number of tests completed to date to 814,638.

Another man connected to the August Auckland cluster also died on Friday at Middlemore Hospital.

He was in his 50s and is believed to have worked at the Mt Wellington Americold coolstore, where the cluster’s first known case worked.

The two deaths mean the number of COVID-19 related deaths in New Zealand has risen to 24.

The New Zealand COVID Tracer app now has more than 2 million registered users, who have collectively scanned an average of 1.7 million QR codes per day during the past week.

New Zealand’s 102-day streak without cases of community transmission was broken on August 11, when a family of four from South Auckland tested positive for COVID-19.

The outbreak prompted the Government to put the Auckland region into a level 3 lockdown for 2½ weeks, while the rest of the country moved to alert level 2.