AUTHOR Joe Hammond, who wrote movingly about his experience of motor neurone disease, has died aged 50 – but his story lives on in the poignant words he left behind.

The dad-of-two’s plight went viral last year when he told how he had written 33 birthday cards for his sons Tom, seven, and Jimmy, three, to open on birthdays that he would not live to see. 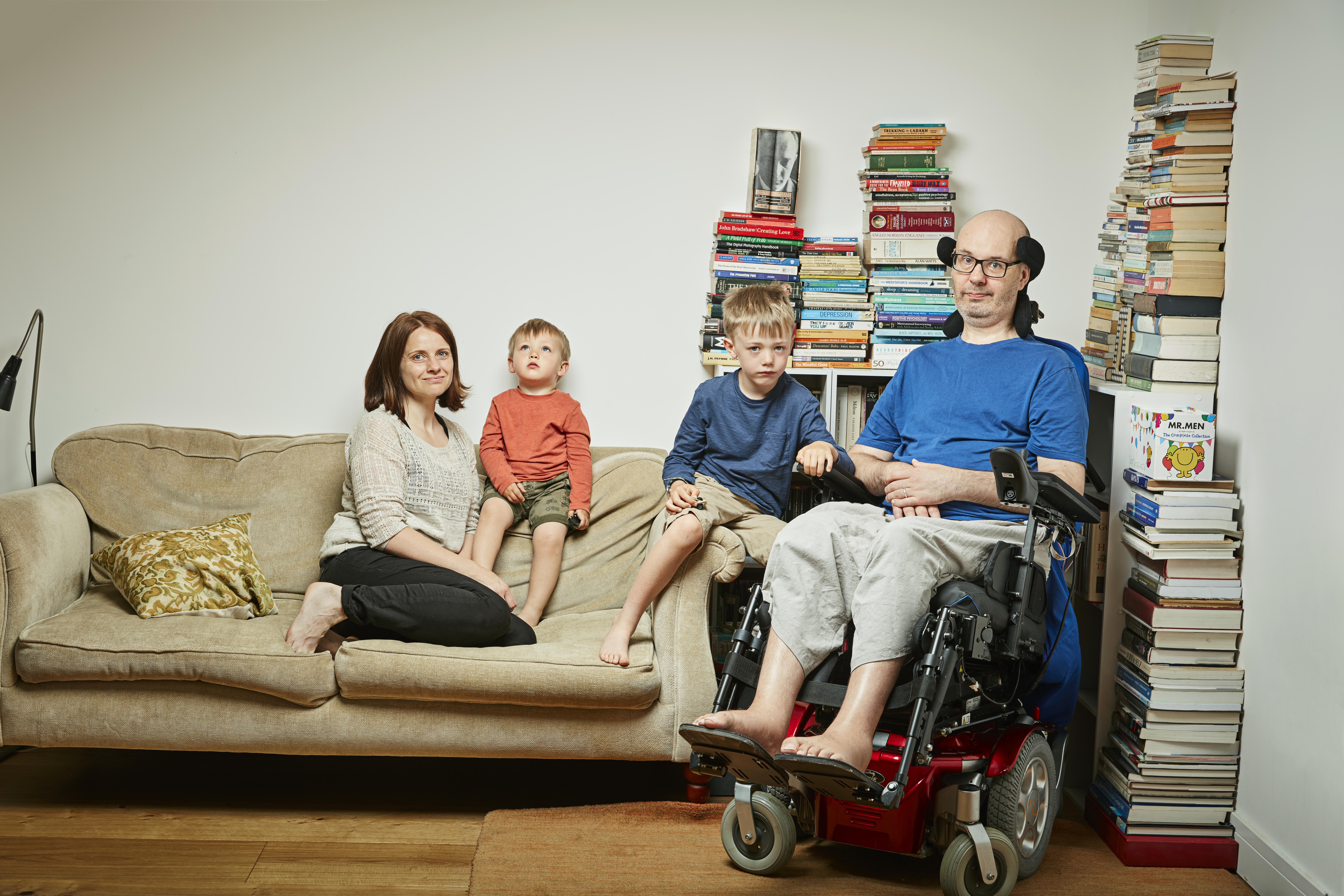 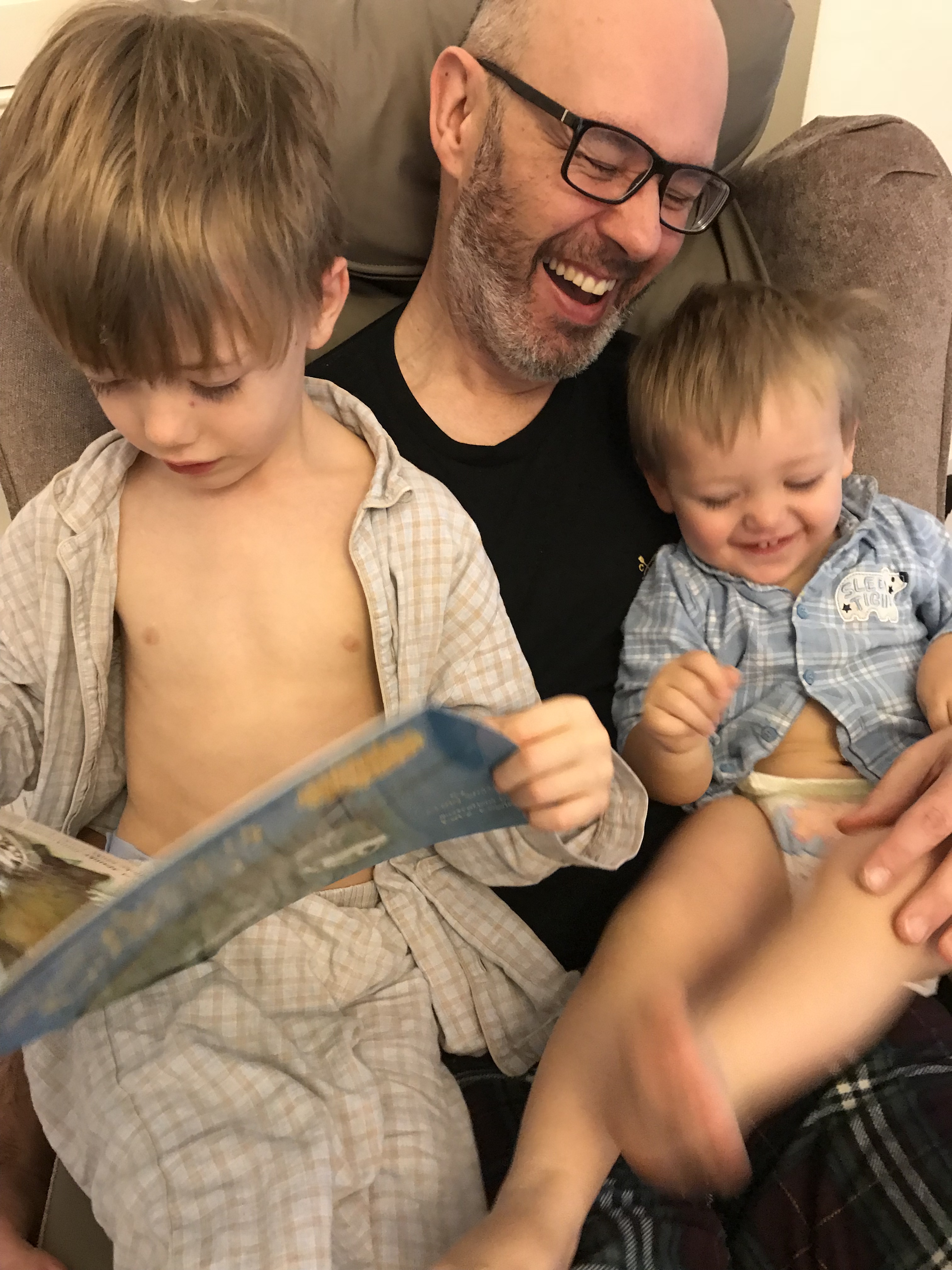 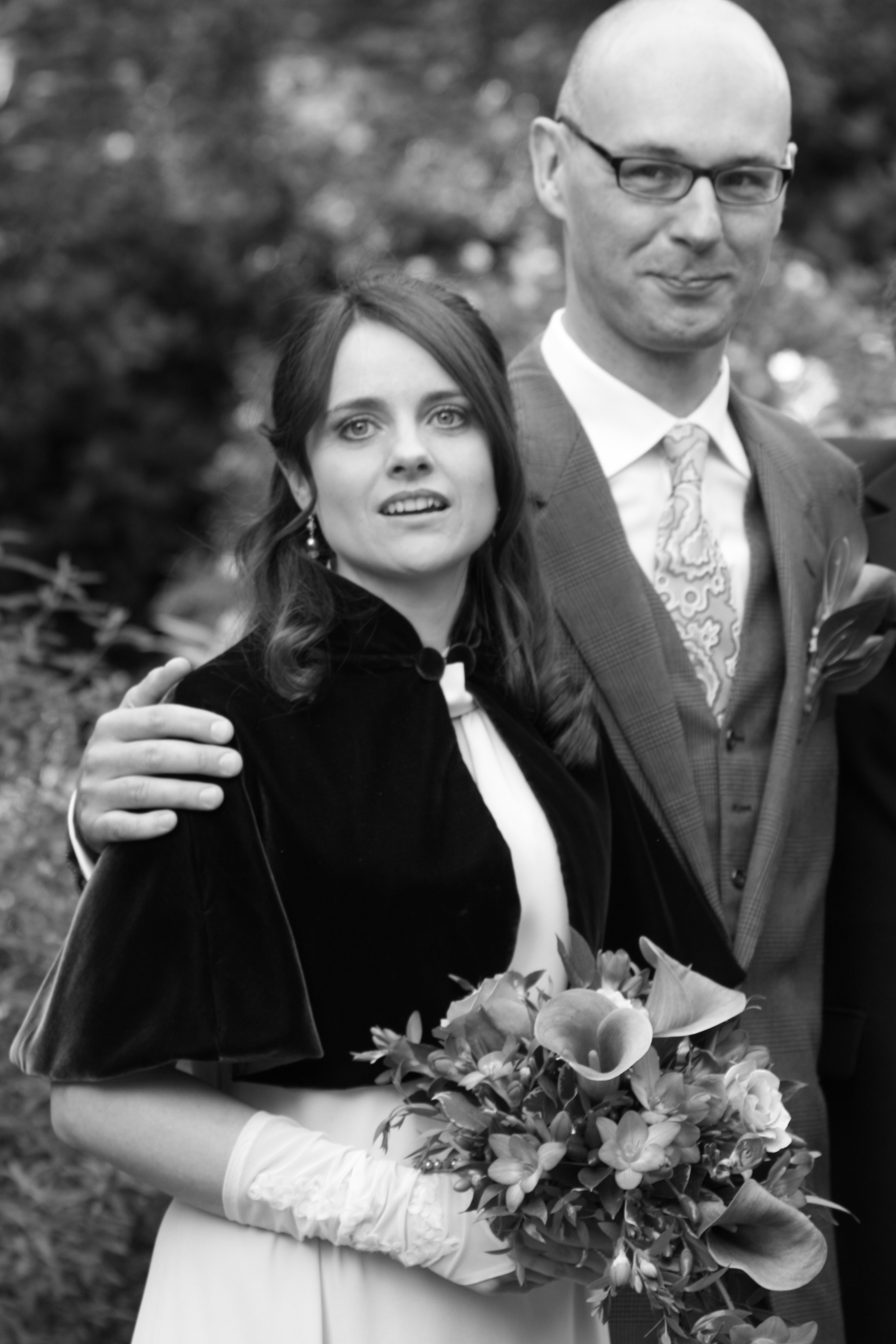 Joe went on to write a memoir, A Short History Of Falling: Everything I Observed About Love Whilst Dying, about the deterioration of his body, knowing MND would soon claim his life.

He had been diagnosed in 2017 when he was 48 and living in Portugal with his kids and wife Gill.

The disease, which affects the brain and spine, leading to muscle deterioration, meant he had little time left with his beloved family. More than 50 per cent of patients die within two years of diagnosis.

The family moved to a house in Hampshire, and Joe began his memoir as a means of making sense of his life and death.

He died peacefully at home on November 30. Here, in an extract from his book, he describes the impact of his diagnosis – and how it felt to look death in the eye.

"I had placed motor neurone disease on the same shelf in my brain where I keep the phone number for Dignitas in Switzerland.

This was on a high-up shelf in the outhouse with a broken tricycle and an unused bread maker.

Immediately prior to receiving the diagnosis, I had been slouching in the corridor. I was holding my phone and browsing inanely through online drivel with my thumb.

This was a few moments before.

When I started crying, my head was parallel with the desktop. The sob I experienced was just like the deep vibration of a kitchen tap after the mains water is turned back on.

A series of metallic shudders through my spine. A chug. A gurgle. And then water.

I remember looking up at Gill. She was crying more gently as she looked down at me. I was over her knee by this point, with my neck arched up towards her. And on her face was the shock of sorrow. Not for herself. For me.

I will never read a face like that in a moment like that again. It’s a wonder to know, that with all the muscular variation the human face is capable of, some permutations are as unique as fingerprints.

I spent five days crying. There were intermissions when I could build fantastical, ornate wooden tower blocks with Tom.

These periods enabled fresh fluids to be taken in, so that I could begin again at night-time or during the school day. 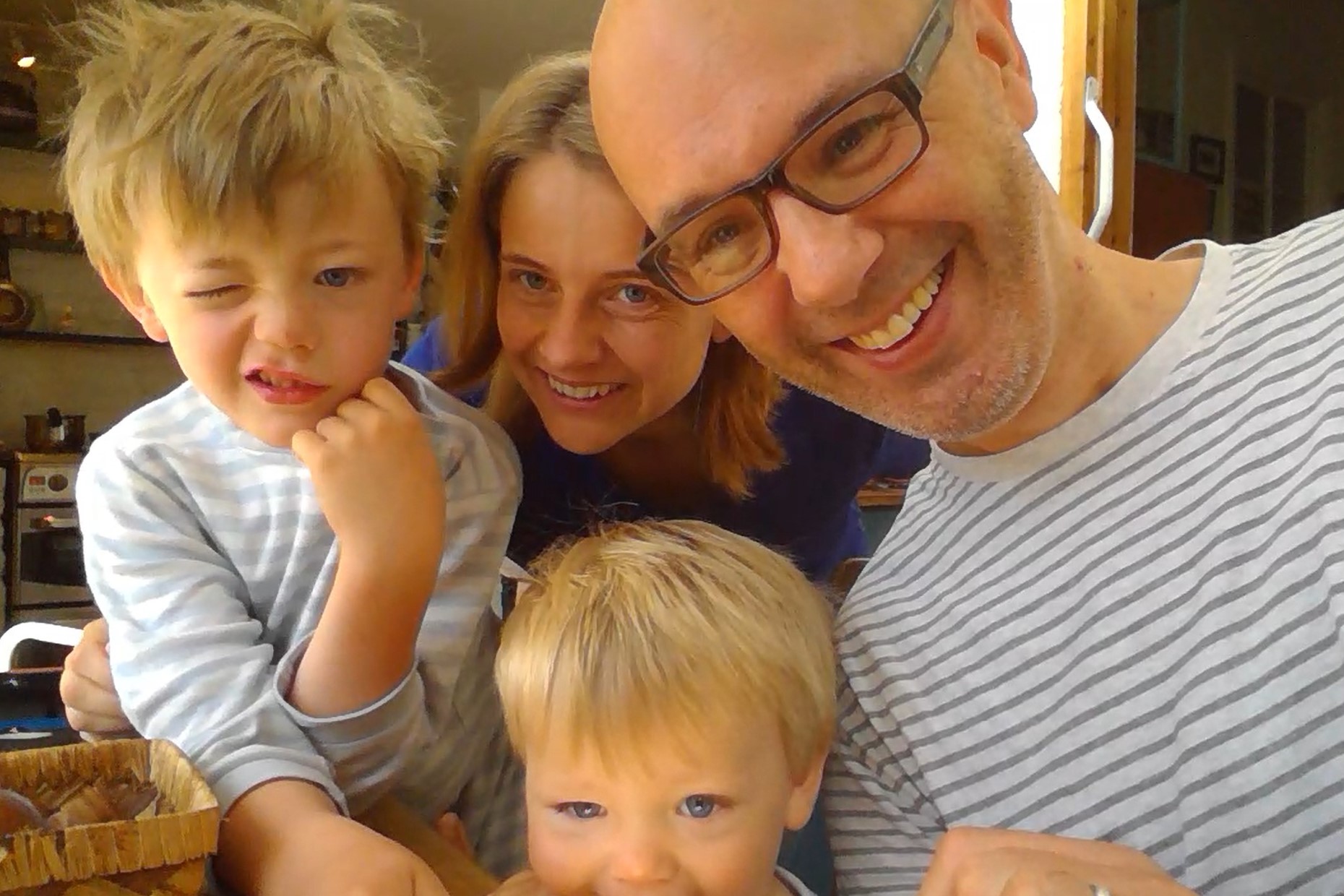 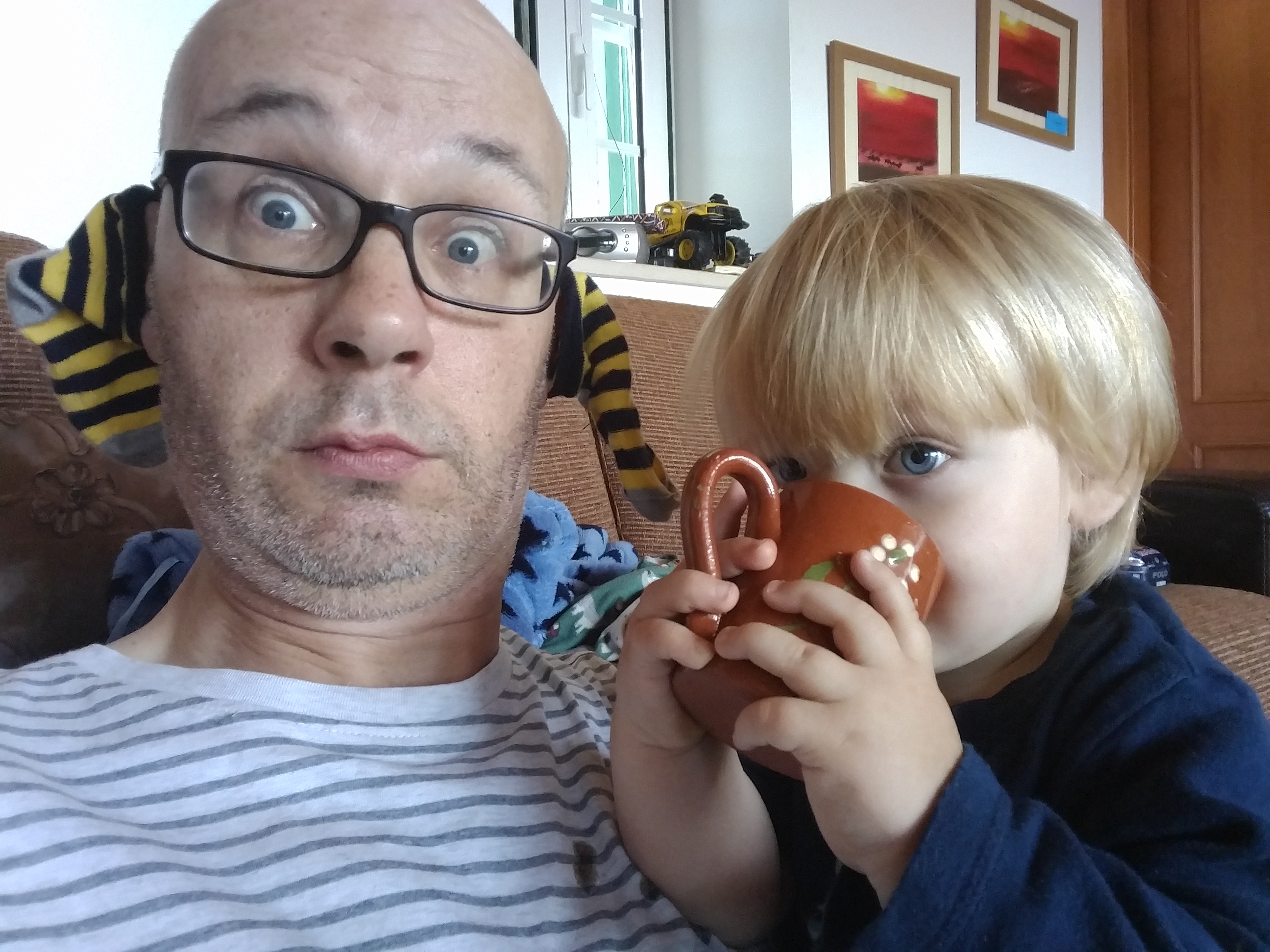 During those nights I awoke several times to cry. Often I had just been dreaming of the diagnosis. And then, sitting up in bed, the expectation was that the day would flow in to dissipate and dissolve.

When it didn’t, it was as if dreams had lost their function. It was an unschooling of the ways in which bad dreams are meant to be dispersed. Sleep was diminished. And waking was never quite achieved.

When the crying came at night, I’d be squeezing the duvet in my fists and thinking very acutely of the physicality of Tom and Jimmy.

It must have been something close to focused meditation, because I would imagine their current form, then focus in on the changes that I imagined would take place in their bodies in the years to come.

I would imagine the lengthening of Tom’s lean legs and the broadening of his V-shaped jawline.

I imagined the fine, fair hair that would appear on his face. I imagined his length and strength and the cheekbones that would one day underline his gaze.

With Jimmy, I love and marvel at the width of his feet and hands. I imagine him continuing to be broad and solid.

His shoulders would thicken and his jawline would be rounder than Tom’s. I imagined him shorter than Tom but more burly.

When the crying came at night, I’d be squeezing the duvet in my fists and thinking very acutely of the physicality of Tom and Jimmy.

In Jimmy’s case I also felt guilt that I knew his physical shape and form, but that he would never remember mine.

He would often nap on the bed with his chin cupped in his hands and I would talk to his sleeping body and tell him how sorry I was.

During those days it felt like some figure was cutting around me with a pair of scissors, moving me with the blades to cut close and accurately.

And as the paper turned, more of me would drop down and I knew that it wouldn’t take long for the scissors to have made their way round.

I would be imagining the boys and Gill. Living in a place I might not know — a life that worked but which was alien to me. The boys older. Life happening. And I was looking at all of this from the outside.

I clung to Gill, but I saw her and Tom and Jimmy connected by something that I wasn’t. Until this time I’d just assumed that we were formed from a single piece. That something like this could never happen.

At the end of those five days of crying the water seeped back into the ground and the emotions left behind were those that I had never allowed myself to fully know or really feel — vulnerability for what I was and am and will become. Very simple feelings.

What is motor neurone disease?

It affects specialist nerve cells in the brain and spinal cord, causing the function of motor neurons to break down.

Over time, the condition progressively worsens as the muscle weakens and can visibly waste.

The majority of those diagnosed with the disease are given a three-year life expectancy starting from when they first notice the symptoms. 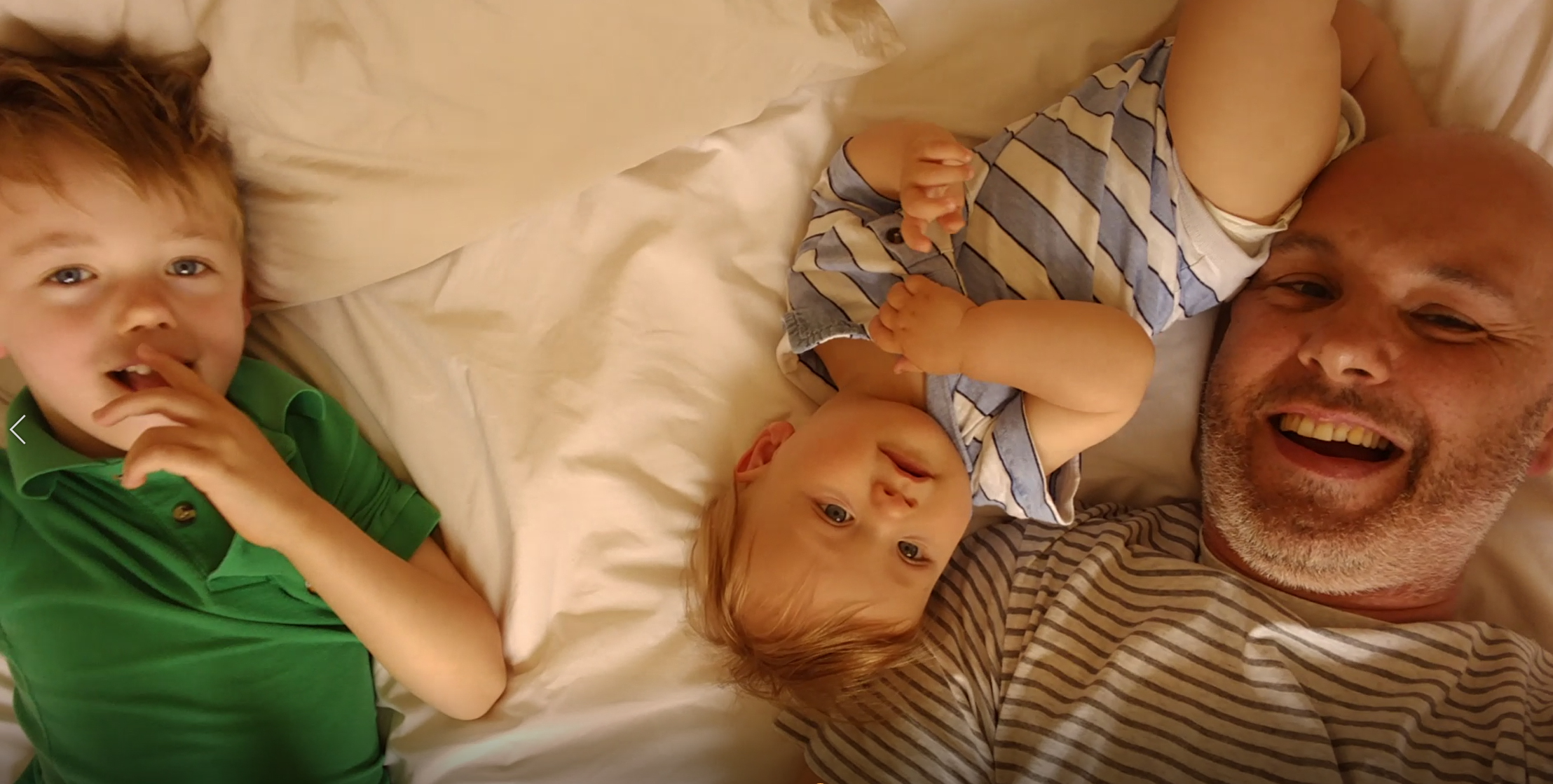 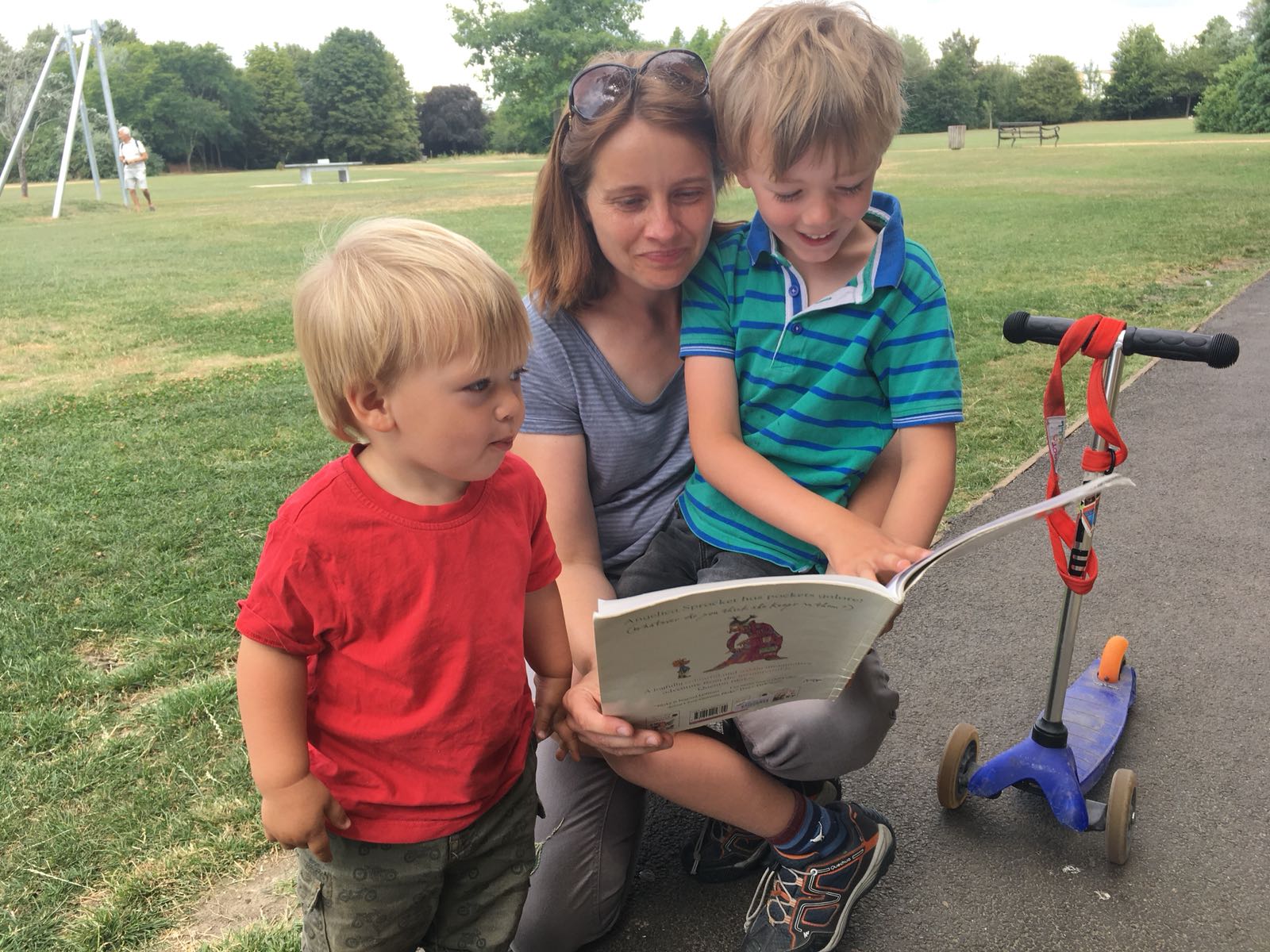 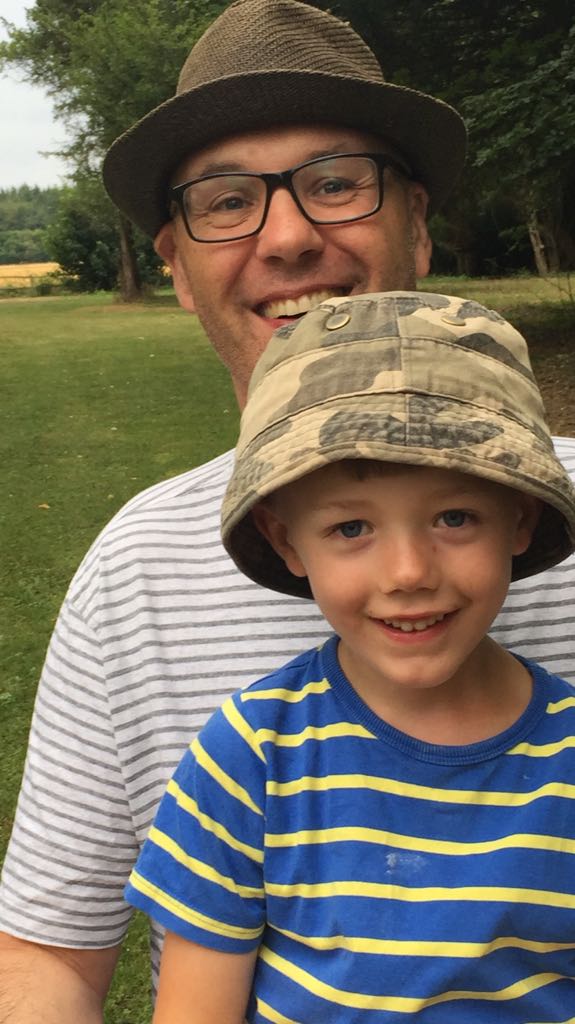 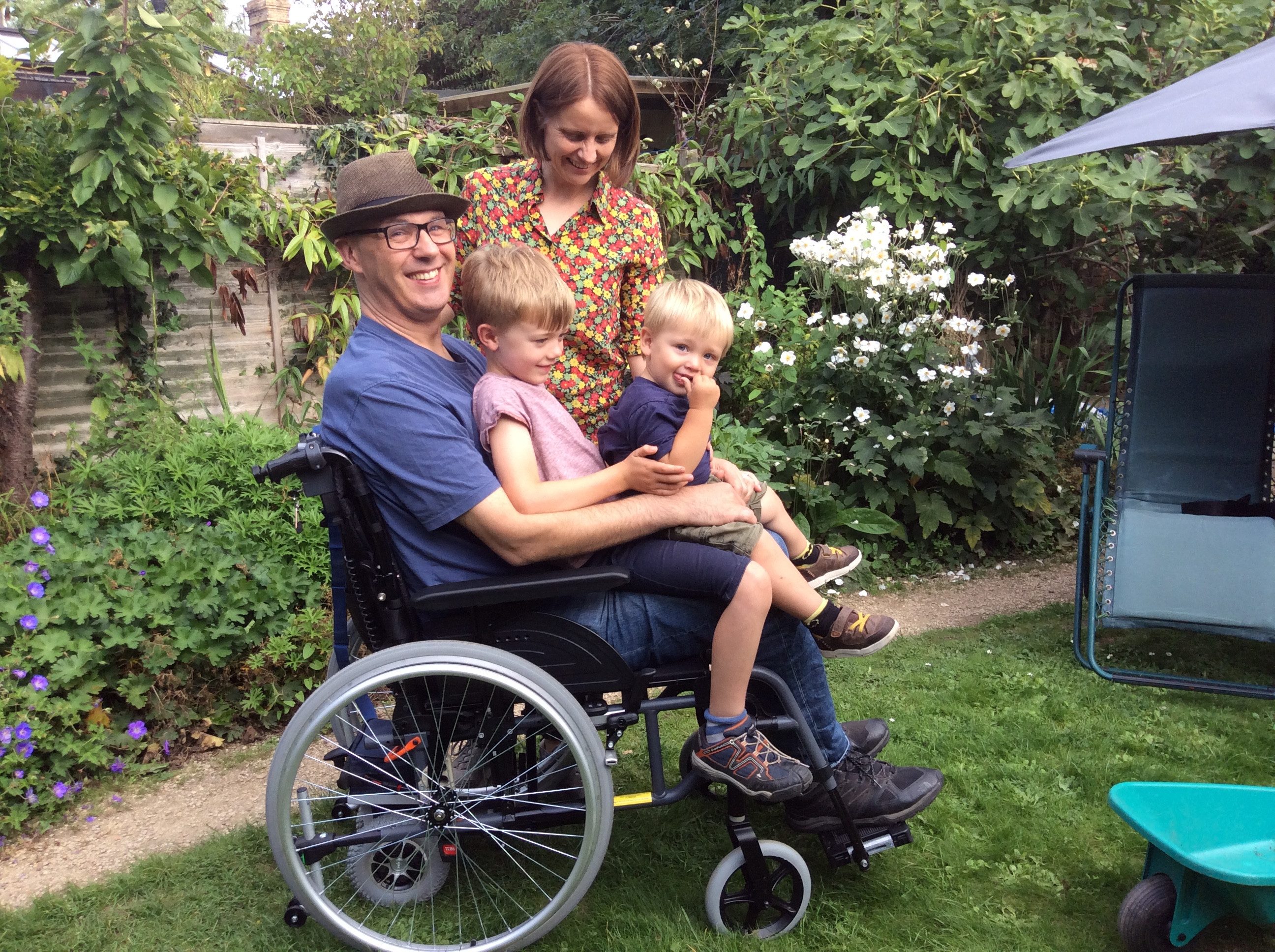 I’ve had conversations about the value of laughter, but I no longer believe it is the best medicine. At the end of my five days of crying, I felt calmer and more at ease than at any time in my life.

I could have held out my hand and weighed myself in my palm and guessed exactly to a gram the scale of this little life of mine.

I knew myself in those dark days. I felt quieter. I listened to the loss and knew exactly where and who I was. It felt like a gift. Extremely small, yet conspicuous against a dark background. Like something reclaimed.

BENCH ABOVE MY GRAVE

The months go by and some of the serious decline happens almost unexpectedly, as if I had fallen asleep and been woken by an unfamiliar platform announcement.

The medical professionals start initiating conversations about value and dignity in dying.

It feels as if I am in the midst of preparation for something. Various documents have been handed to me and various choices presented — a bit like the baggage and car-hire emails received in the days before flying.

I find death so interesting that I wish I had known about it earlier. I’ve been to funerals before, but I don’t think I ever picked up that this would also happen to me one day.

The months go by and some of the serious decline happens almost unexpectedly, as if I had fallen asleep and been woken by an unfamiliar platform announcement.

But now I realise how essential this information is and that any journey, no matter how enjoyable, loses value without a clear sense that it will, at some point, come to an end.

When Gill and I first wrote our wills, we requested that our ashes be scattered in the Indian Himalayas, which is not a decision that anyone with a balanced idea of their own mortality would make.

It sounds like an option you might select for a wager or for something that has an outside chance of occurring.

As it became clear that this really was something that was happening, it was Gill who initially liked the idea of a woodland grave close to where we live in Hampshire. Bluebells grow on the site and I am planning to have a bench above my grave.

I might put a ramp at the end of my bench, from which toy cars can launch into the undergrowth.

Gill likes the idea of coming here with the boys, and there are paths leading everywhere.

I’m disappearing now, and this above-ground work feels like part of the preparation for the granular changes to come.

This slowing is probably common to anyone who has the time to really experience dying. It feels like a slight drop in temperature, and in noise too.

It’s a slowing down, which then gives the appearance that others are moving around much more quickly — Gill, my children, the postman, Frida, my friend’s dog.

I now have no connection to their speed. It’s a gradual introduction to the art of being still, not a violent one, as it is for many others.

And I think this is something not widely appreciated about my disease — the extent to which it enables a person to gently build up to the moment, as a kind of practice, so that the transition can be made as smooth as possible." 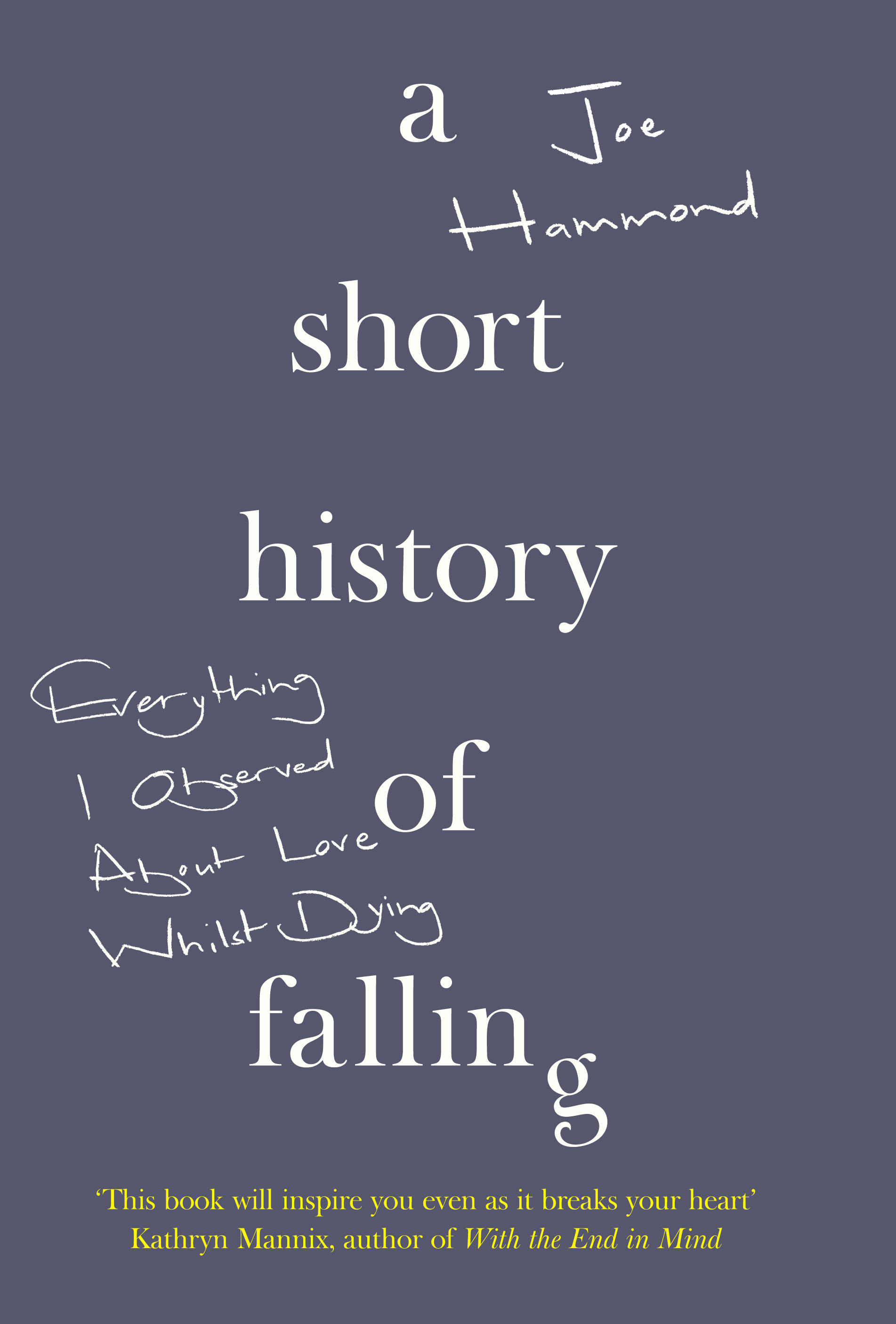