Jackson Pollock’s Blue Poles may be considered the National Gallery of Australia’s most commercially valuable painting, but the 200 poles of the Aboriginal Memorial are now considered its most culturally important.

“We have our Blue Poles, but we now consider our ‘black poles’ our most significant work in terms of what they mean to Australians,” said Wierdi man Bruce Johnson McLean, the NGA’s assistant director, Indigenous engagement. 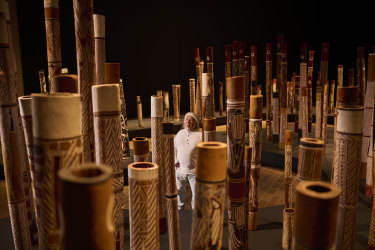 Original artist-curator, Djon Mundine poses for a portrait amongst The Aboriginal Memorial at the National Gallery of Australia.Credit:Rohan Thomson

As of next Wednesday, the painted hollow log coffins will be moved from their current location near the entrance foyer to the most central gallery on level one, the heart of the NGA.

The cultural significance of the move is an important moment not just for its Yolngu creators during Reconciliation Week, but also the nation as it moves towards accepting the Uluru Statement from the Heart, under the new Labor government.

It also fulfils the original mission of the installation when it was opened during the 1988 bicentennial celebrations, by then NGA director James Mollison. The director, who in the early ’70s convinced then prime minister Gough Whitlam to purchase the Pollock painting, was also convinced this Indigenous work was “one of the most important works of art created in this country”.

It is world-famous now too, having played a crucial role in securing Sydney’s 2000 Olympics Games, travelling to The Hermitage in St Petersburg where each pole was carried in carefully by Russian soldiers, and the Olympic Museum in Lausanne. 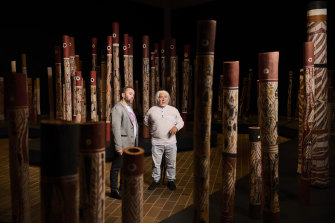 Now its display will be aligned with the original intent of the 43 Indigenous artists who created it, only five of whom still survive, as well as that of the conceptual curator Djon Mundine, a Bundjalung man from the Northern Rivers of NSW, who worked closely in the 1970s with the remote Ramingining community in the Northern Territory. The log coffins are situated broadly according to where the artists’ clans live along the Glyde River and its tributaries he explained.

He first presented his idea to create “a forest of totem poles, that were bone coffins in ceremonial practice,” to the 1986 Sydney Biennale curator, Nick Waterlow.

“He liked the idea of presenting a mourning ceremony that Yolngu do in Arnhem Land, but also the idea of a local ritual that could be applied in a sort of national context. Nick immediately understood the importance and impact of the project,” recalls Mundine of the late curator.

The plan is for the gallery to work more closely with the Ramingining community, with Mundine and Johnson McLean visiting Arnhem Land recently to see the original artists and their families, who are understandably proud of their famous work.

Mundine was insistent the work be called a memorial not “another bloody monument”.

“Australia has thousands of monuments in country towns, sandstone obelisks in memory of Anzac soldiers, but nearly all of these are about wars fought overseas. This is a memorial to all Indigenous people who died defending their country since 1788,” he said.

“A lot of Indigenous artists wanted to boycott the bicentennial celebrations, but now as [historian] Henry Reynolds said, this work is the only lasting thing from 1988.”

A cultural guide to going out and loving your city. Sign up to our Culture Fix newsletter here.