Washington: It's never a good day when a US President bans reporters from one of the country's major media outlets from covering their campaign events, as Donald Trump did on Monday (Tuesday Australian time).

In a statement, Trump's campaign chief Brad Parscale announced that Bloomberg News journalists would not receive accreditation for Trump campaign rallies and other events. The Republican National Committee said it would do the same. 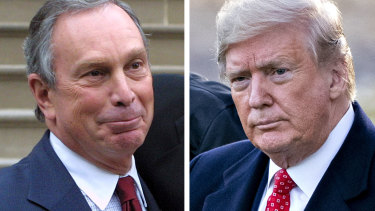 Michael Bloomberg, left, is hoping to win the Democratic nomination to go head to head against Donald Trump in 2020. Credit:AP

It is an unfortunate decision, but hardly a surprising one. If Michael Bloomberg is looking for someone to blame for the ban, he should start by looking in the mirror rather than at the White House.

When the billionaire media mogul announced his intention to run for president last month, he created a massive dilemma for the media organisation that bears his name.

While Bloomberg News is best known for its financial reporting, it also covers politics extensively – including the Democratic presidential primary contest. 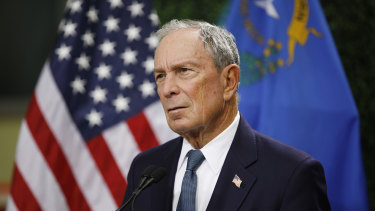 So how would its reporters cover the race now that its own founder and boss was one of the most prominent candidates? Conflicts of interest don't come much more glaring than that.

It was a question the organisation faced when Bloomberg ran to be the mayor of New York City – a position he held for 12 years.

During that time, the organisation declared coverage of the billionaire’s wealth and personal life to be off limits.

It has essentially decided to take the same approach this time around – even though Bloomberg is running for a much more significant position.

In a November 24 memo to reporters, Bloomberg News editor-in-chief John Micklethwait announced that the organisation would "continue our tradition of not investigating Mike (and his family and foundation) and we will extend the same policy to his rivals in the Democratic primaries".

The outlet would report on how Bloomberg is faring in the polls and on the campaign trail; indeed, it would assign a reporter to cover him.

But it would not publish any investigative journalism about him – or indeed, any of his rivals.

The decision was instantly criticised, including by former Bloomberg employees.

"It is truly staggering that *any* editor would put their name on a memo that bars an army of unbelievably talented reporters and editors from covering massive, crucial aspects of one of the defining elections of our time," Megan Murphy, the former editor of Bloomberg Business Week, wrote on Twitter. "Staggering." 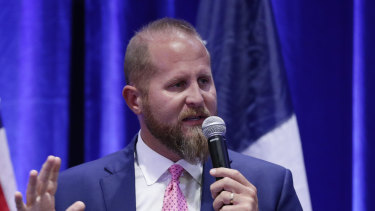 Brad Parscale, campaign manager to President Donald Trump, announced that the campaign would ban Bloomberg reporters from covering rallies and other events.Credit:AP

It was bad enough that the organisation had precluded itself from digging into issues like Bloomberg's wealth or his controversial track record on policing when he was mayor.

But what if a Bloomberg reporter got a hot tip that another candidate was distorting their personal history or lying in their campaign ads?

They'd just have to ignore it – or pass it on to a rival outlet.

It's clearly an absurd position for a major media organisation, but it's not the fault of the editorial staff at Bloomberg.

When he announced his presidential run, Bloomberg could have declared that he wanted his organisation to cover him as forensically and fairly as any other candidate.

He could have said that no journalist would face any reprisals for publishing unflattering stories about him.

To be sure, there would always have been doubts about whether his employees were self-censoring but it was the best option under the circumstances.

That's not what he did.

"Quite honestly, I don’t want all the reporters I’m paying to write a bad story about me," he said in an interview last year.

"I don’t want them to be independent."

Explaining the ban on Monday, Parscarle said: "Bloomberg News has declared that they won’t investigate their boss or his Democratic competitors, many of whom are current holders of high office, but will continue critical reporting of President Trump.

"As President Trump’s campaign, we are accustomed to unfair reporting practices, but most news organisations don’t announce their biases so publicly."

He had a point.

At a time when American journalists face heated, and often unfair, criticism for doing their jobs Bloomberg has played right into Trump's hands, providing potent evidence for his claims of media bias.

He put his own unlikely presidential ambitions ahead of editorial independence and his employees are paying the price.