Malibu threatened and nine dead from monster wildfires in California

PARADISE, Calif. (Reuters) – Two monster wildfires in California, including the most destructive in state history, burned out of control on Saturday, having already killed at least nine people, destroyed scores of buildings and forced hundreds of thousands to flee their homes.

Nine people were found dead in and around the Northern California town of Paradise, where more than 6,700 homes and businesses were burned down by the 100,000-acre (40,470-hectare) Camp Fire, the state’s most destructive on record, authorities said.

In Paradise, which had about 26,000 residents, the fire destroyed most homes and half the businesses, the town’s mayor Jody Jones said on CNN, describing a long period of recovery ahead.

“It’s going to be a process, a lot of hard work, a lot of coming together, but we want to see Paradise be paradise again,” Jones told CNN.

About 500 miles (800 km) to the south in the posh enclave of Malibu, the Woolsey Fire was threatening thousands of homes after triggering mandatory evacuation orders for a quarter million people in the oceanside city as well as other communities in Los Angeles and Ventura counties.

The fire has destroyed “a lot of homes,” with a full count still under way, and it doubled in size overnight to 70,000 acres, Los Angeles County Fire Chief Daryl Osby said.

“Our firefighters have been facing some extreme, tough fire conditions that they said that they’ve never seen in their lives,” Osby said at a news conference.

All 13,000 residents of Malibu, which is 30 miles west of downtown Los Angeles, were told to get out on Friday.

The bodies of two people were discovered in Malibu but it was too early to determine if they died from fire or another cause, Los Angeles County Sheriff’s Department officials said.

Firefighters have been unable to build any containment lines around the Woolsey Fire, but officials said they hoped to take advantage of a lull in winds on Saturday to make progress.

President Donald Trump, weighing in on the emergency during a trip to France, said early on Saturday that “gross mismanagement of forests” was to blame.

“There is no reason for these massive, deadly and costly forest fires in California except that forest management is so poor,” he wrote in a Twitter post.

“Billions of dollars are given each year, with so many lives lost, all because of gross mismanagement of the forests. Remedy now, or no more Fed payments!” he added.

Trump, a Republican, has previously blamed California officials for fires and threatened to withhold funding, saying the state should do more to remove rotten trees and other debris that fuel blazes. 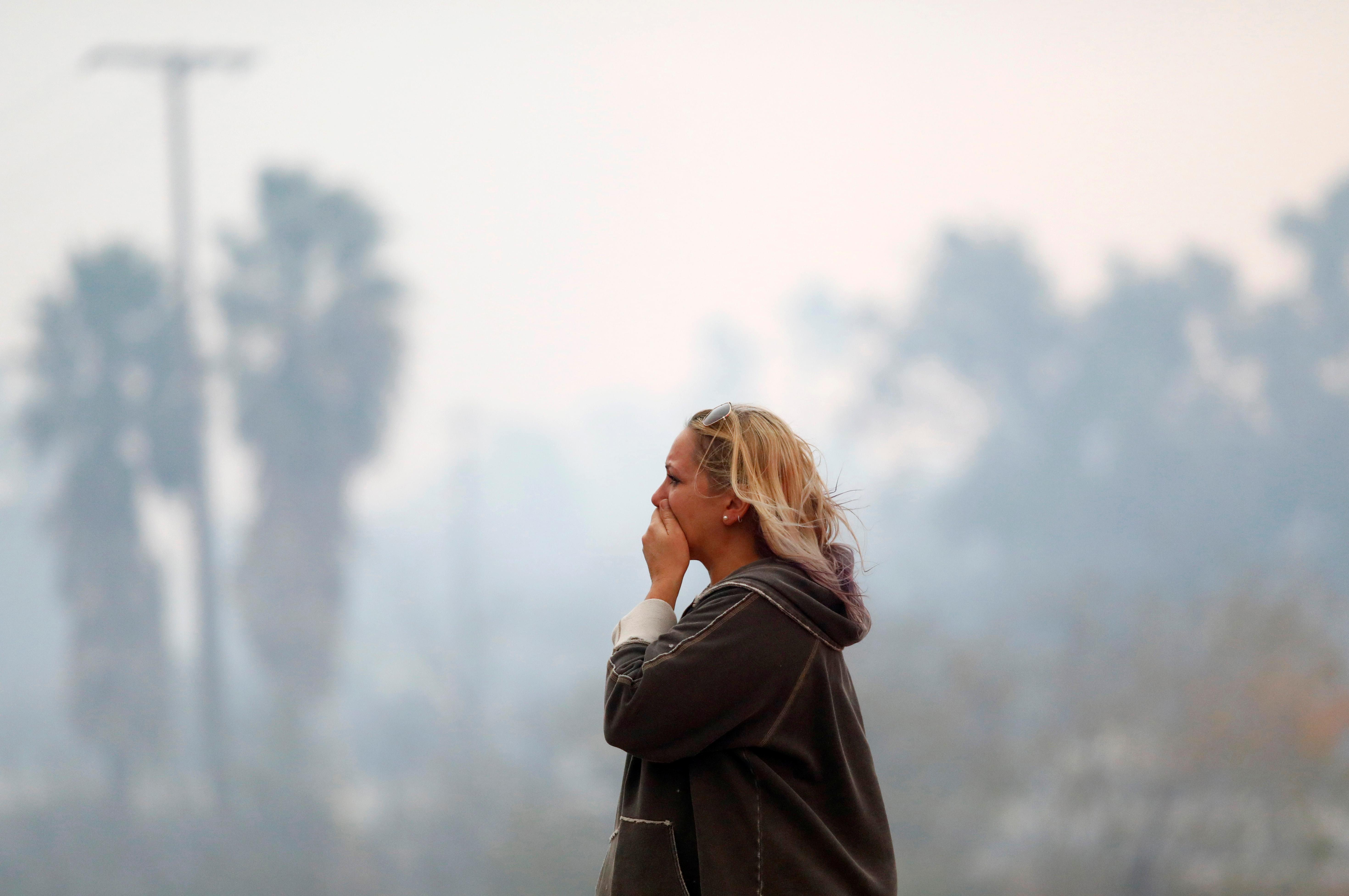 Officials in the state have countered that climate change is the main culprit and have pointed out that many of the burn areas have been in federally-managed lands.

“Our focus is on the Californians impacted by these fires and the first responders and firefighters working around the clock to save lives and property – not on the President’s inane and uninformed tweets,” Evan Westrub, a spokesman for California Governor Jerry Brown said in an email.

Several of the victims of the Camp Fire, which broke out on Thursday at the edge of the Plumas National Forest northeast of Sacramento, were found in or near burned out cars, police said.

The flames descended on Paradise so fast that many people were forced to abandon their vehicles and run for their lives down the sole road through the mountain town.

Some 35 people had been reported missing and three firefighters had been injured. The blaze was only 20 percent contained on Saturday.

The Woolsey Fire broke out on Thursday in Ventura County near Los Angeles and quickly jumped the 101 Freeway, a major north-south artery, in several places. On Friday, it crossed the Santa Monica Mountains toward Malibu, where flames driven by wind gusts of up to 50 miles per hour (80 kph) raced down hillsides and through canyons toward multi-million dollar homes.

Early on Saturday, flames approached Malibu’s Pepperdine University, a private residential college with 7,700 students, where many remained sheltered on the main campus. 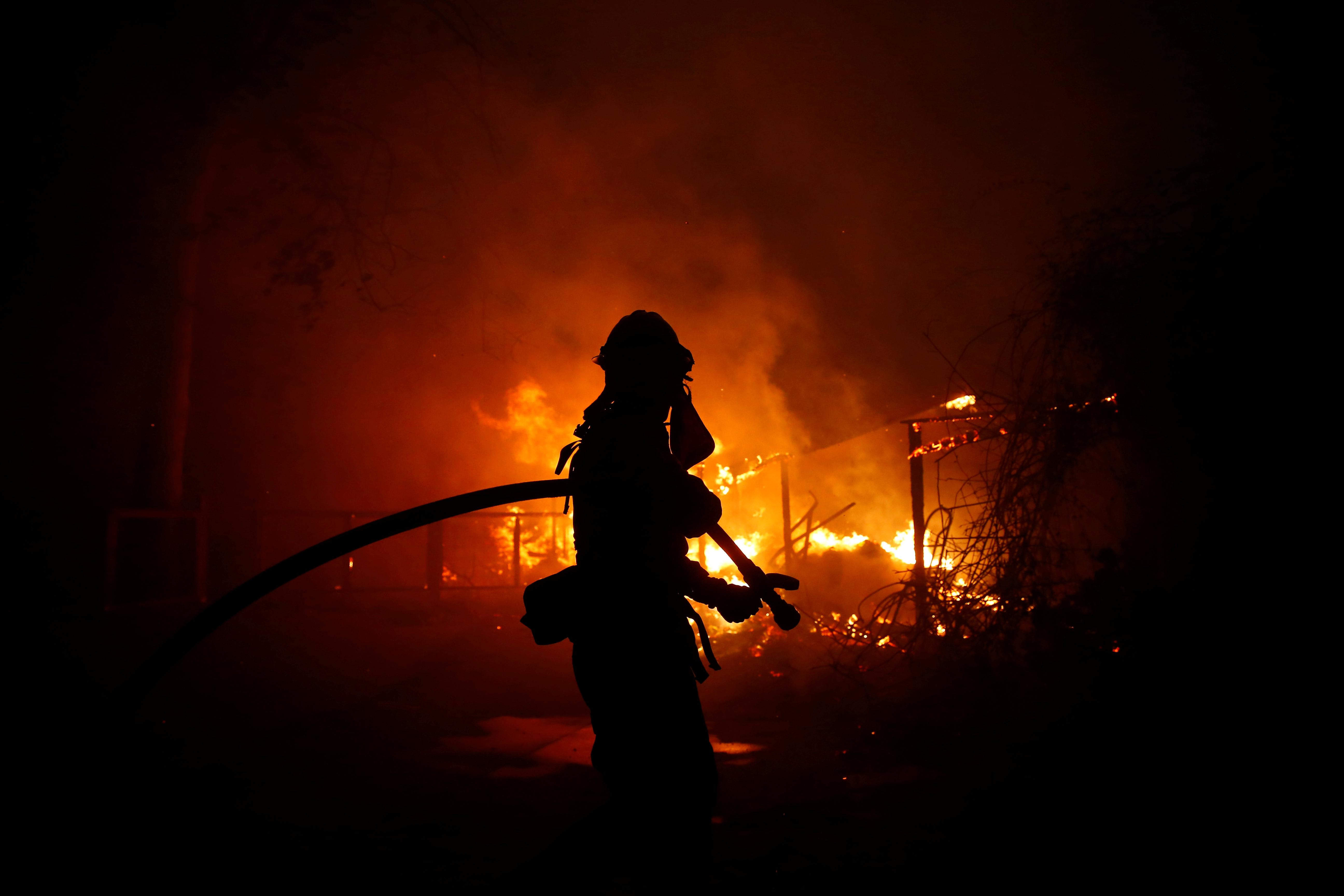 School officials told the students that they have been assured by fire officials that the university’s buildings were built to withstand fire.

Among those forced to flee the Malibu area were celebrities including Lady Gaga and Kim Kardashian, who said on Twitter that flames had damaged the home she shares in nearby Calabasas with Kanye West.

In Ventura County, most of the town of Thousand Oaks was ordered evacuated, adding to the anguish days after a gunman killed 12 people in a shooting rampage at a bar.