Leader of Colombia's Gulf Clan is extradited to America

‘The most dangerous drug trafficker in the world’ is extradited from Colombia to America under heavy armed guard: ‘Otoniel’ led the violent Gulf Clan before being caught in operation with 500 soldiers and 22 helicopters after a decade on the run

One of Colombia’s most notorious drug lords was extradited on Wednesday to the United States to face drug trafficking charges, announced President Ivan Duque.

He was captured in 2021 near the border with Panama following a military operation involving 500 soldiers and 22 helicopters, in which one police officer was killed. 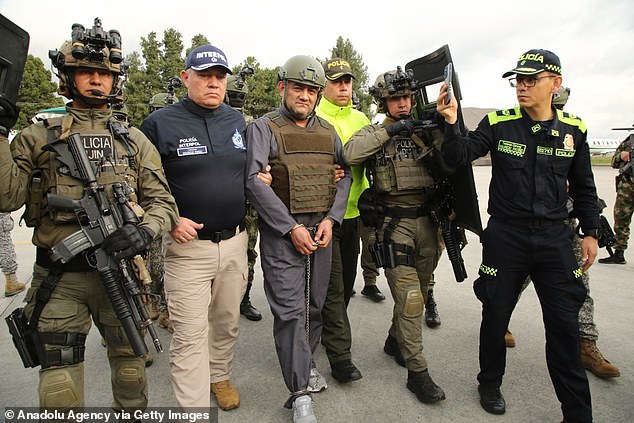 Dairo Antonio Úsuga David (pictured center Wednesday) was the leader of Colombia’s largest narco-trafficking gang, known as the feared Gulf Clan. He has now been extradited to the US

‘I want to reveal that Dairo Antonio Usuga, alias ‘Otoniel’ has been extradited,’ Duque said on Twitter, calling him ‘the most dangerous drug trafficker in the world.’

Usuga, 50, was the most wanted person in Colombia until he was arrested last October in the northwest of the country after a massive military operation.

Duque described Usuga as a ‘murderer of social leaders and police, an abuser of boys, girls and teenagers.’

‘Today legality, the rule of law, the security forces and justice triumphed,’ he added.

On Wednesday afternoon, a convoy of five bulletproof police vehicles transported Usuga from a prison in the capital Bogota to a military airport, where he was handed over to US Drug Enforcement Administration officials.

Images shared by local media showed a handcuffed Usuga seated in an airplane alongside Colombian police and an Interpol official.

His arrest was one of the biggest blows to Colombia’s drug trafficking business since the assassination of Pablo Escobar in 1993. 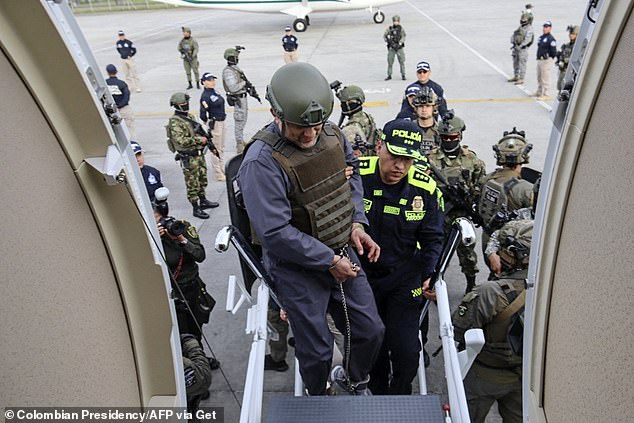 Colombian drug lord and head of the Gulf Clan, Dairo Antonio Usuga – aka ‘Otoniel’ – boards a plane to be extradited to the US, in Bogota on May 4, 2022

Usuga was indicted in 2009 in the United States, which had offered a $5 million bounty for information leading to his arrest.

The United States accuses Usuga and the Gulf Clan of illegally bringing at least 73 tons of cocaine into the country between 2003 and 2012.

Authorities say the 50-year-old is responsible for the deaths of hundreds of members of Colombia’s security forces.

Following Usuga’s arrest and that of another 90 suspected gang members, Duque declared the ‘end’ of the Gulf Clan.

However, four Colombian soldiers were killed in attacks blamed on the gang just days after Usuga’s arrest.

The Gulf Clan was believed to be responsible for 30 percent of cocaine exports from Colombia, the world’s largest producer and supplier of the drug.

Formally known as the Los Urabeños and Clan Úsuga, the Gulf Clan is a neo-paramilitary group, in addition to being a drug cartel.

It is currently involved in the on-going Colombian armed conflict, having first appeared after the demobilization of the United Self-Defense Forces of Colombia.

In 2011, the clan declared war on the Los Rastrojos – a rival cartel – for control over the drug trade in Medellin, and in the decade that followed has grown into the most powerful criminal organization in the country.

It is believed to have some 3,000 members within its inner organizational circle. 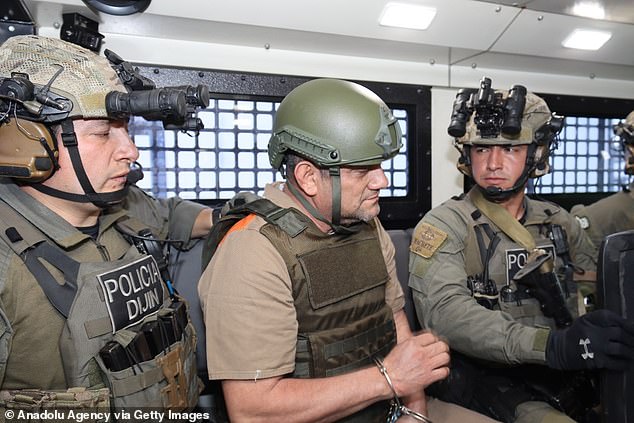 Dairo Antonio Usuga, alias Otoniel, leader of drug trafficking group captured in October 2021 was extradited to the US, in Bogota, Colombia on May 04, 2022. Pictured: Otoniel is shown in the back of an armored vehicle while being escorted by armed police

Since his capture, Usuga has been held in a high-security prison in Bogota, and has been at the heart of multiple controversies.

Recordings of testimony ‘Otoniel’ gave to the Truth Commission – an extrajudicial body investigating the decades-long conflict between the government and the Revolutionary Armed Forces of Colombia (FARC) – were stolen, the perpetrators unknown.

‘Who is afraid of Otoniel?’ read a headline on Cambio, an independent online news outlet, which claimed that some people in the Colombian government sought to silence the drug lord.

The site reported Usuga would have said during his hearings that the army continued to work in complicity with right-wing paramilitaries in some parts of the country.

Citing a leaked Truth Commission document, the outlet said ‘Otoniel’ had implicated 63 people as linked to the Gulf Clan, including a former minister, a former national director of intelligence, six former governors and four former members of parliament.

Family members of Usuga’s victims had asked for the courts to suspend his extradition, arguing that he should stand trial in Colombia for ‘crimes against humanity.’

‘They did not respect the feelings of the victims,’ said Marina Sanmiguel, whose husband was killed in a 1997 paramilitary raid.

Usuga ‘could be a key person to clarify what really happened,’ she told AFP. 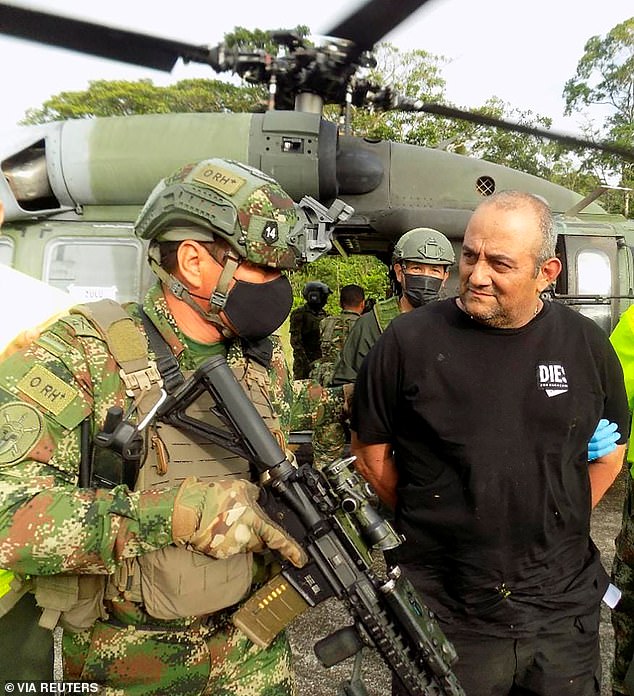 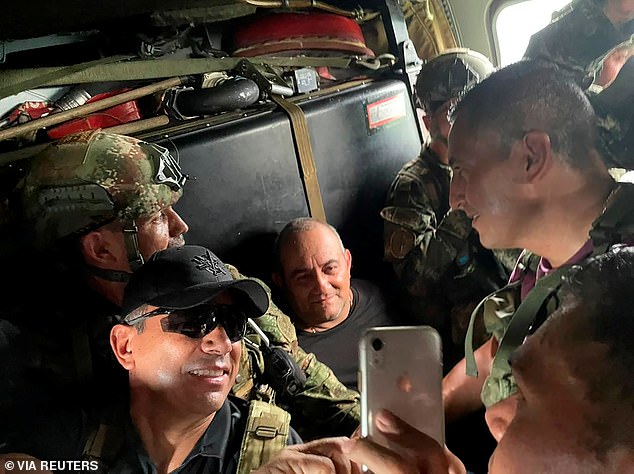 Dairo Antonio Usuga David, alias ‘Otoniel’, poses for a photo while escorted by Colombian military soldiers inside a helicopter after being captured, in Turbo, Colombia October 23, 2021

Duque vowed that Usuga would still face justice in Colombia.

‘This criminal was extradited to serve drug trafficking sentences in the United States,’ the president said.

‘But I want to be clear that once those are served, he will return to Colombia to pay for the crimes committed against our country.’

After his capture, claimed to the Special Jurisdiction for Peace (JEP) tribunal that he handed himself in.

The JEP was created under a 2016 peace deal with the now demobilized FARC rebel group to try former combatants and members of the military.

Otoniel’s lawyers argued against his extradition, saying he should be allowed to testify before the JEP, confess his role in Colombia’s nearly six decades of internal conflict and reveal links between the military and illegal armed groups.

The crimes of Dairo Antonio Úsuga David, aka ‘Otoniel’

Otoniel has long been a fixture on the U.S. Drug Enforcement Administration’s most-wanted list.

He was first indicted in 2009, in Manhattan federal court, on narcotics charges and for allegedly providing assistance to a far-right paramilitary group designated a terrorist organization by the U.S. government.

Later indictments in Brooklyn and Miami federal courts accused him of importing into the U.S. at least 73 metric tons of cocaine between 2003 and 2014 through countries including Venezuela, Guatemala, Mexico, Panama, and Honduras.

Authorities say the 50-year-old is also responsible for the deaths of hundreds of members of Colombia’s security forces.

Úsuga David has also cycled through the ranks of several guerrilla groups, most recently claiming to lead the Gaitanist Self Defense Forces of Colombia, after a mid-20th century Colombian leftist firebrand.

The Colombian government began the capo’s extradition after the State Council lifted a provisional suspension of an order by Duque endorsing the move.

The high court dismissed a petition from a group of Úsuga David’s victims who argued that his extradition would violate their rights to justice and reparation.

They wanted him to first face the more than 128 proceedings against him in Colombia.

Duque said that from the United States, Úsuga would continue collaborating with the Colombian authorities in the investigations against him and once he completes his sentences for drug trafficking, he will return to ‘Colombia to pay for the crimes he committed.’

The Gulf Clan’s army of assassins terrorized much of northern Colombia to gain control of major cocaine smuggling routes through thick jungles north to Central America and onto the U.S.

As he defied authorities for years, his legend as a bandit grew alongside the horror stories told by Colombian authorities of the many underage women he and his cohorts allegedly abused sexually.