The Kremlin has blamed foreign and Ukrainian air defence systems for the damage caused in the latest wave of deadly Russian missile attacks.

But Russia’s U.N. ambassador, Vasily Nebenzya, claimed – without evidence – that damage to Ukraine’s infrastructure was caused by missiles fired by Ukrainian air defence systems that crashed into civilian areas after being fired at Russia’s missiles. 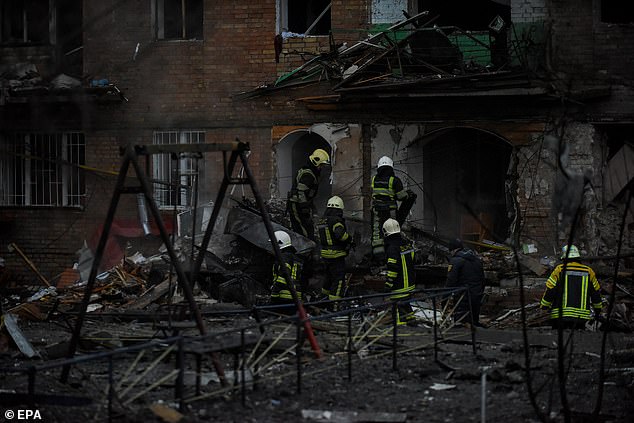 The Kremlin has blamed foreign and Ukrainian air defence systems for the damage caused during the latest wave of Russian missile attacks. Pictured: Firefighters work at the site of an apartment block destroyed by shelling in Vyshhorod, near Kyiv on November 23 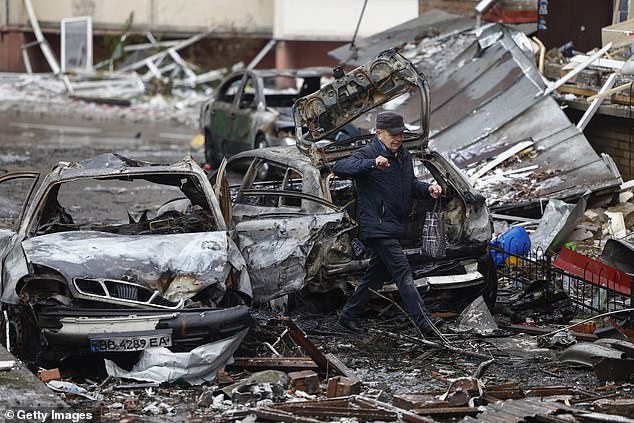 Pictured: A man steps carefully through the rubble today after a Russian missile struck a residential street in Vyshhorod on Wednesday. The attacks left multiple people dead and disconnected three Ukrainian nuclear plants automatically from the national grid 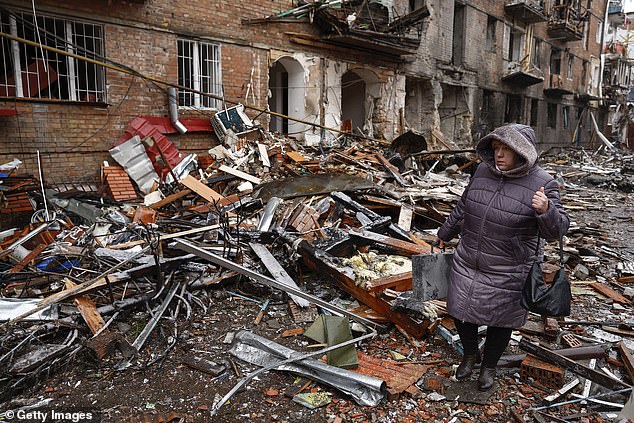 Pictured: A woman returns to view her home in Vyshhorod after yesterday’s missile strikes on November 24. Russia’s U.N. ambassador, Vasily Nebenzya, claimed – without evidence – that damage to Ukraine’s infrastructure was caused by missiles fired by Ukrainian air defence

In comments responding to US Ambassador to the U.N. Linda Thomas-Greenfield – who said Russian President Vladimir Putin was ‘clearly weaponising winter to inflict immense suffering on the Ukrainian people’ – Nebenzya on Wednesday called on the West to stop providing Kyiv with air defence missiles.

Kremlin spokesman Dmitry Peskov continued in a similar vein on Thursday, saying that Ukrainian president Volodymyr Zelensky could ‘end suffering’ in Ukraine by meeting Russia’s demands to resolve the conflict.

Since October 10, Russia has launched six massive aerial attacks against Ukraine’s power grid and other infrastructure.

And a targeted onslaught against power infrastructure across Ukraine over the last few weeks have forced millions of people to go without light, water or heating for hours or days at a time, just as outdoor temperatures fall below freezing.

But Peskov insisted Russia has only been targeting military facilities.

‘There have been no strikes on ‘social’ targets and there are none – special attention is paid to this’, Peskov told reporters on Thursday. ‘As for targets that are directly or indirectly related to military potential, they are accordingly subject to strikes.’

Peskov was asked how the suffering of Ukraine’s civilian population could be reconciled with President Vladimir Putin’s positions.

Putin has said Russia does not wish to destroy Ukraine or its people.

Meanwhile, the Kremlin said it does not plan to supply oil to countries supporting a price cap on Russian oil, a threat which will add to fears of a mounting energy crisis in Europe as the continent enters the winter months. 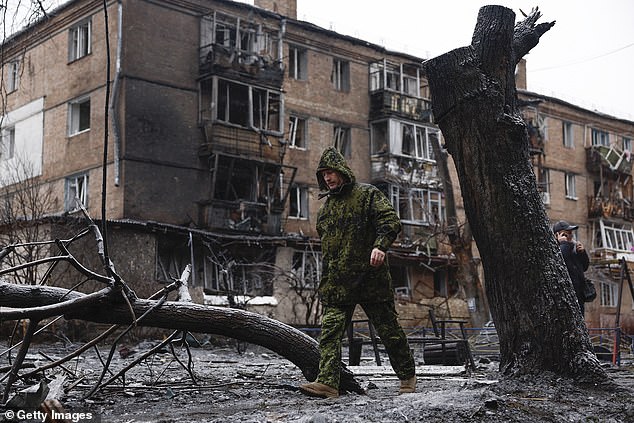 Pictured: A man in camouflage clothing walks through a residential street on Thursday after it was struck by a Russian missile on Wednesday 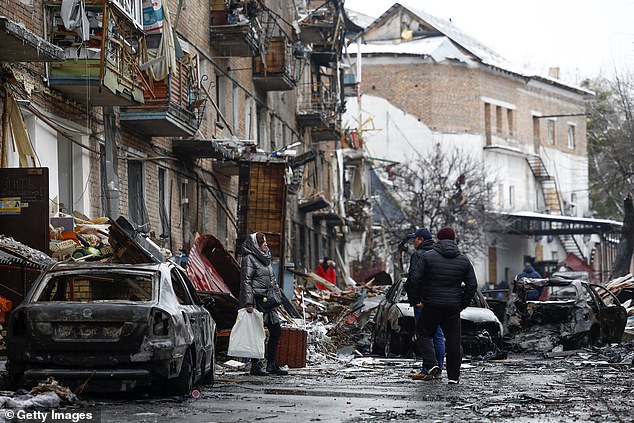 Pictured: Three residents talk in the middle of a street covered in debris after a Russian missile damaged buildings and destroyed vehicles on Wednesday

Ukraine has uncovered nine more Russian torture chambers and the bodies of 432 civilians in the liberated Kherson Oblast.

According to Andrii Kostin, Prosecutor General of Ukraine, the country was also working to de-mine the region.

‘According to the Prosecutor General’s Office, the existence of nine torture chambers in the liberated territory of Kherson Oblast has been confirmed,’ Kostin said during a Thursday broadcast, Interfax-Ukraine reported.

‘The bodies of 432 civilians who were killed have been discovered.’

Describing the remaining threats in the region, he added: ‘Many territories and buildings remain mined. There are also mortar attacks from the aggressor.’

Ukraine struggled on Thursday to repair its battered power and water services after Russia targeted the electricity grid with dozens of cruise missiles.

Amid plunging temperatures, the Ukrainian energy system is on the brink of collapse and millions have been subjected to emergency blackouts for weeks due to systematic Russian bombardments of the grid.

The World Health Organisation has warned of ‘life-threatening’ consequences and estimated that millions could leave their homes as a result.

Mayor Vitali Klitschko said more than two-thirds of the capital was still cut off on Thursday despite municipal workers in Kyiv restoring some water service overnight.

‘Seventy percent of the capital remains without electricity,’ Klitschko said. ‘Energy companies are making every effort to return it as soon as possible,’ he added.

Ukraine’s military accused Russian forces of firing around 70 cruise missiles at targets across the country on Wednesday and of deploying attack drones.

Moscow’s targeting of Ukrainian power facilities is their latest strategy hoping to force capitulation after nine months of war that has seen Russian forces fail in most of their stated territorial objectives.

At least 10 people were killed in Wednesday’s strikes, including a newborn baby who was killed when a Russian missile destroyed a maternity ward in the city of Vilniansk, in Ukraine’s central Zaporizhzhia region.

Since Russia’s invasion began on February 24, the World Health Organisation (WHO) has registered 703 attacks on Ukrainian healthcare infrastructure. Putin’s forces have been accused of carrying out numerous war crimes. 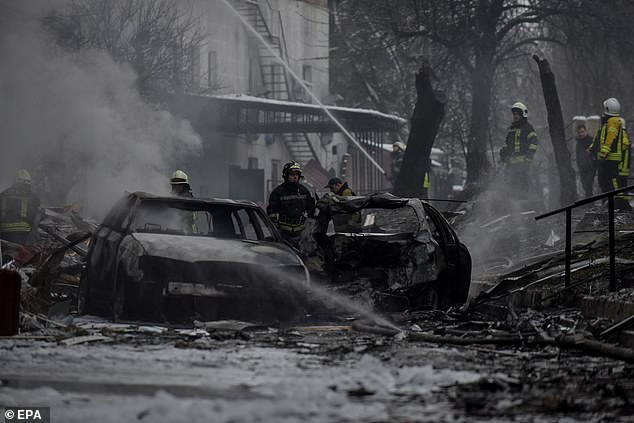 Pictured: Firefighters work at the site of an apartment block destroyed by shelling in Vyshhorod on Wednesday. Russia launched a barrage of strikes across the country 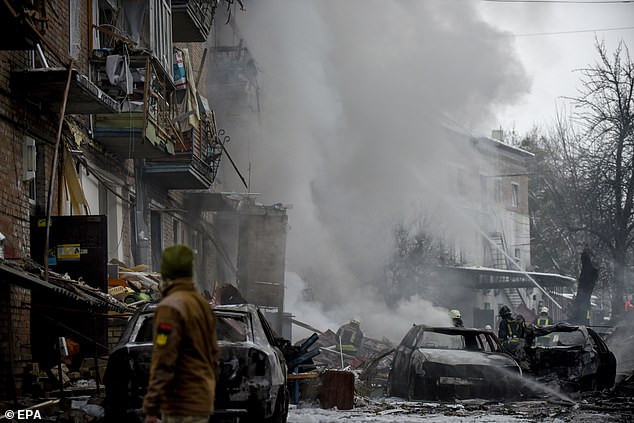 Pictured: Smoke rises from the Vyshhorod street on Wednesday after the missile strike 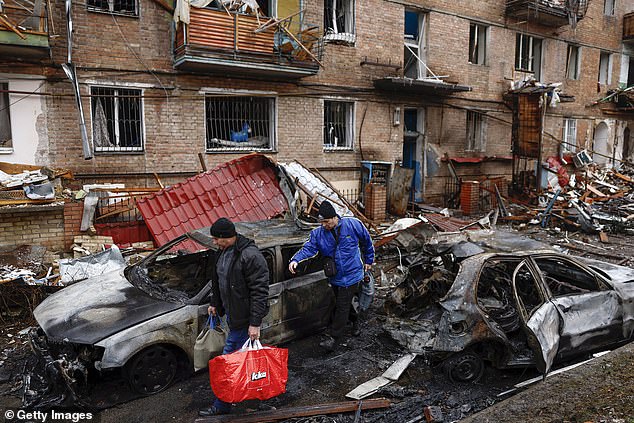 Pictured: Residents return to assess the damage to their homes in Vyshhorod after the attack

‘So many victims, so many houses ruined,’ 52-year-old Iryna Shyrokova told AFP in Vyshgorod on the outskirts of Kyiv after Russian strikes on Wednesday.

‘People have nowhere to live, nowhere to sleep. It’s cold. I can’t explain it. What for? We are also human beings,’ she said, calling it ‘the scariest day’.

Ukraine’s energy ministry said that all three nuclear facilities had been reconnected by Thursday morning.

The head of the central region of Poltava, Dmytro Lunin, said authorities were ‘working around the clock to restore power’.

‘In the coming hours, we will start supplying energy to critical infrastructure and then to the majority of households,’ Lunin said. 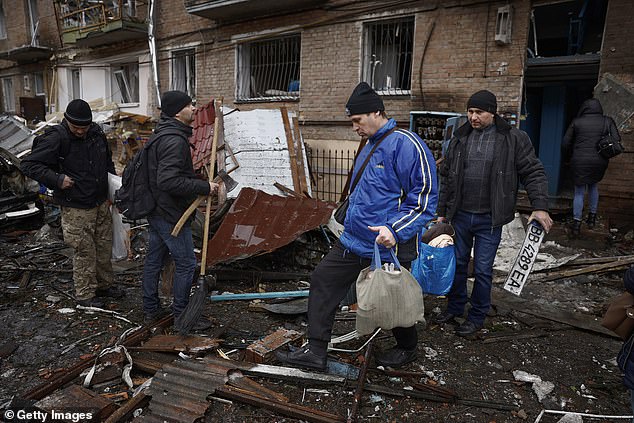 Pictured: Residents return to assess the damage to their homes in Vyshhorod after the attack 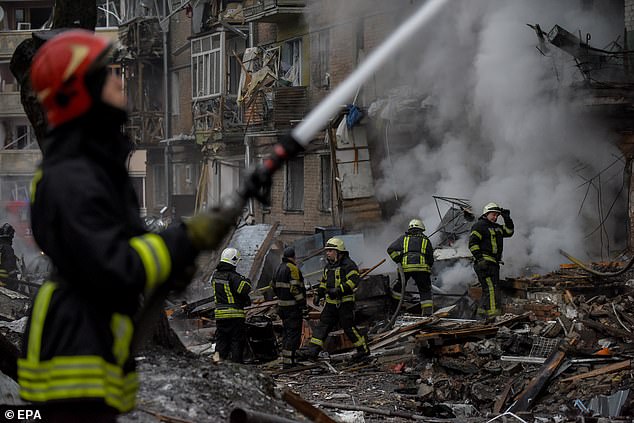 ‘The energy supply situation is complicated. So shutdowns will continue in the region to reduce the pressure on the grid as much as possible,’ Reznichenko warned.

Repair work was ongoing elsewhere, including in the Rivne, Cherkasy, Kirovograd and Zhytomyr regions, officials said.

Moscow announced separately it had issued tens of thousands of Russian passports to residents of four Ukrainian territories, which President Vladimir Putin claimed to have annexed last month.

‘More than 80,000 people received passports as citizens of the Russian Federation,’ Valentina Kazakova, a migration official with the interior ministry, said in remarks carried by Russian news agencies.

In September, Russia held so called referendums in Donetsk, Lugansk, Zaporizhzhia and Kherson and claimed residents had voted in favour of becoming subjects of Russia. Putin formally annexed the territories at a ceremony in the Kremlin in early October, even though his forces have never had full control over them.