Washington: Democratic presumptive nominee Joe Biden has called for a nationwide mandate that would force Americans to wear masks outdoors in a bid to stop the spread of coronavirus.

As the global pandemic continues to ravage the US, Biden on Thursday said that every American “should be wearing a mask when they’re outside for the next three months at a minimum”, and that such a mandate should be enforced by state governors. 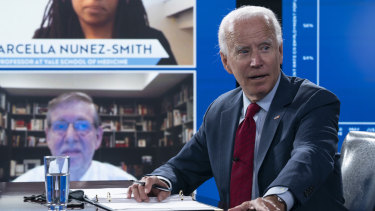 The call is a slight shift to Biden’s previous policy – which pushed for a national federal mandate rather than one imposed by the state – but still sits in stark contrast to President Donald Trump, who regularly refuses to wear a mask and has consistently said it should be up to states to decide on the rules.

“Every governor should mandate mandatory mask-wearing,” Biden said, speaking alongside his new running mate Kamala Harris after the pair attended a coronavirus briefing with health experts.

"It's not about rights," said Biden. "It's about responsiblities."

“This is America. Be a patriot. Protect your fellow citizens. Step up, do the right thing.” 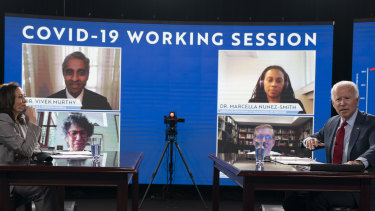 However Trump hit back, noting that each state is different, and criticising Biden for refusing to take questions explaining his position. He added that forcing a nation-wide mandate would "shut down society" and result in the economy "grinding to a halt." 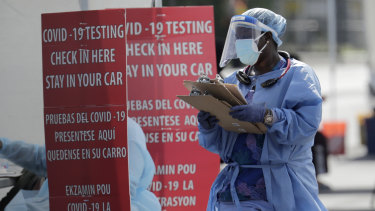 A healthcare worker at a COVID-19 testing site in South FloridaCredit:AP

The comments came as the latest figures from John Hopkins University show that the US recorded almost 5910 new cases and almost 1500 new deaths on Thursday.

With less than three months until the US election, both sides spent Thursday trading blows over everything from COVID19, Kamala Harris’ elevation on the ticket, and the integrity of ballots.

Trump caused ructions early in the day by saying he was holding up stimulus funding to block mail in voting.

President Trump has long railed against voting by mail, claiming without evidence that it leads to rampant fraud. However he has now suggested that he opposed the Democrats' proposed boost in funding for the US Postal Service because he wants to make it harder to mail-in ballots.

“They need that money to make the post office work so it can take all of these millions and millions of ballots,” he told Fox News. “If we don’t make a deal, that means they don't get the money; that means they can’t have universal mail in voting. They just can’t have it.”

In response, Biden later described as “Pure Trump. He doesn’t want an election.”