New York: Countries around the world are accelerating deliveries of desperately needed medical supplies to India as the country endures an unrelenting, catastrophic second wave of coronavirus infections.

On Sunday, the United States delivered the third of six aid shipments to New Delhi, including 1000 oxygen cylinders; Britain donated more than 400 oxygen concentrators; and France sent eight oxygen generators, each of which can serve 250 hospitalised patients. 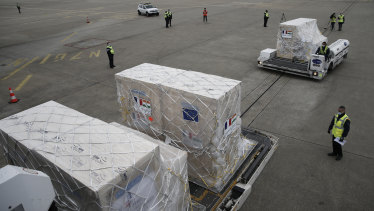 Medical supplies and materials are loaded into a cargo plane to India at Roissy airport, north of Paris on Saturday. Credit:AP

Oxygen in India has been in short supply as it grapples with this latest wave of infections, leaving some dying COVID patients gasping for air in hospital beds. Others, unable to find room in overwhelmed health care centres, have died in hospital parking lots or at home.

More than three dozens countries large and small have pledged to help India, which on a single day this weekend reported a world record of 401,993 new infections. Daily deaths have nearly doubled over the past two weeks, hitting 3689 on Saturday. 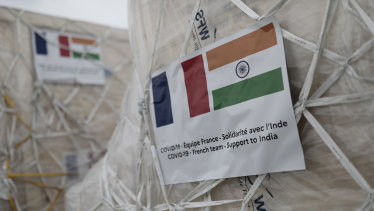 France sent oxygen respiratory equipment and generators to India to help the country deal with the COVID-19 crisis.Credit:AP

Australia is sending 1000 non-invasive ventilators and 100 oxygen concentrators and tanks to India on May 5, and is willing to send 2000 more ventilators if needed. While Australia has also offered to send personal protective equipment, India’s most urgent need was oxygen supplies.

Relatives of the sick have taken to social media with pleas seeking not only portable oxygen tanks, but also hospital beds or medicines such as remdesivir.

The country’s misery has been compounded by a series of deadly hospital accidents, including a fire Saturday that killed 16 COVID patients and two health care workers in the western city of Bharuch.

Over the weekend, aid from a half-dozen countries touched down at airports across India; they included a shipment of 157 ventilators from the United Arab Emirates, 500 oxygen cylinders from Taiwan and 1000 vials of remdesivir from Belgium. 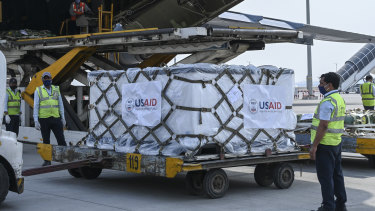 Relief supplies from the United States in the wake of India’s COVID-19 situation arrive at the Indira Gandhi International Airport cargo terminal in New Delhi, India on Friday.Credit:AP

US President Joe Biden has been under intense pressure to do more to address the crisis in India. His administration intends to make up to 60 million doses of the AstraZeneca vaccine available to other countries, as long as federal regulators deem the doses safe.

The US top trade negotiator will begin talks with the World Trade Organisation on ways to overcome intellectual property issues that are keeping critically needed COVID-19 vaccines from being more widely distributed worldwide, two White House officials said on Sunday.

Vaccines are badly needed in India, where shortages forced several states on Saturday to delay expanding access to everyone age 18 or older.

The United States has pledged to provide $US100 million ($129 million) worth of supplies, which will include 15 million N95 masks and a million rapid diagnostic tests.

On Sunday, White House chief of staff Ron Kain said the Biden administration had sent the raw materials to produce 20 million vaccine doses, and he said the US was considering whether to lift patents on vaccines to boost global production.

“We are rushing aid to India,” Klain said in an appearance on CBS’s Face the Nation. The administration, he added would soon announce “how we can get this vaccine more widely distributed, more widely licensed, more widely shared.”

The United Kingdom announced it will send another 1000 ventilators, in addition to the oxygen concentrators, 200 ventilators and three oxygen generation units that were pledged last week.

A leading Indian industry body urged authorities to take the “strongest national steps” and to curtail economic activity to save lives on Sunday as the country battles the surging coronavirus cases.