‘I can’t believe it’s over… but many wonderful memories live on’: Hugh Fearnley-Whittingstall pays heartfelt tribute to ‘dear friend’ Nick Fisher after police found body in search for Bafta-winning writer

Celebrity chef Hugh Fearnley-Whittingstall has remembered Bafta-award winning writer Nick Fisher, describing him as ‘the best person to spend time with’, after police discovered a body in Dorchester following a missing persons investigation.

The 63-year-old scriptwriter and author, whose TV credits include EastEnders, Casualty, Hustle and The Giblet Boys – for which he won a Bafta in 2006 – was last seen in Hooke, Dorset, on Tuesday afternoon.

Police on Thursday morning found a body in Dorchester believed to be that of Mr Fisher, although formal identification is yet to take place.

The death is not being treated as suspicious and the coroner has been notified. Mr Fisher’s family have also been informed.

Dorset Police said in a statement: ‘Our thoughts are with the family and friends of Nick at this extremely difficult time.

‘We would like to thank everyone who assisted with the searches, as well as the public for their help in providing information.’

Mr Fisher, 63, had driven off in a silver Nissan Navara truck with the registration number YE71 DFA with his brown and white springer spaniel dog beside him, and was reportedly then seen at 5pm buying a cup of tea at a hotel near Dorchester. 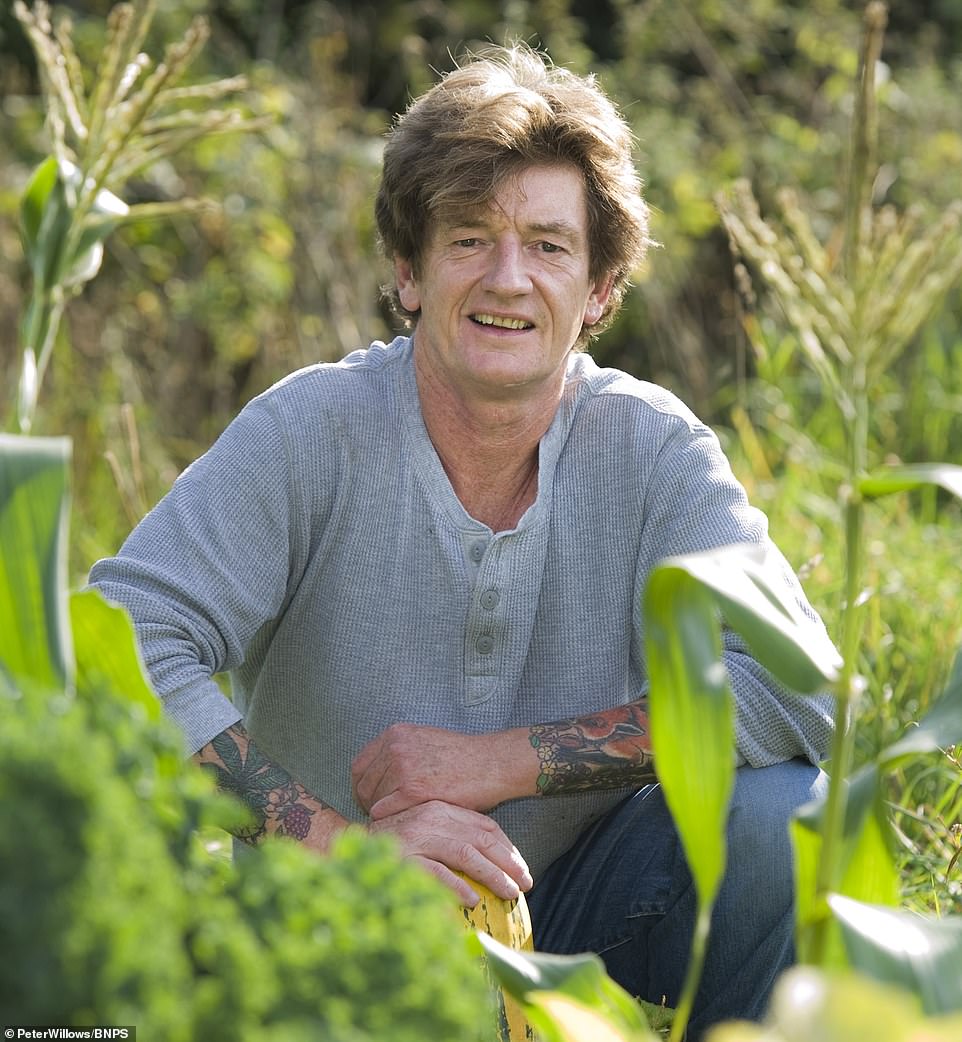 Police have found the body of a man believed to be the missing BAFTA-winning script writer and celebrity fisherman Nick Fisher after he went missing with his dog on Tuesday. Pictured at his home in Dorset 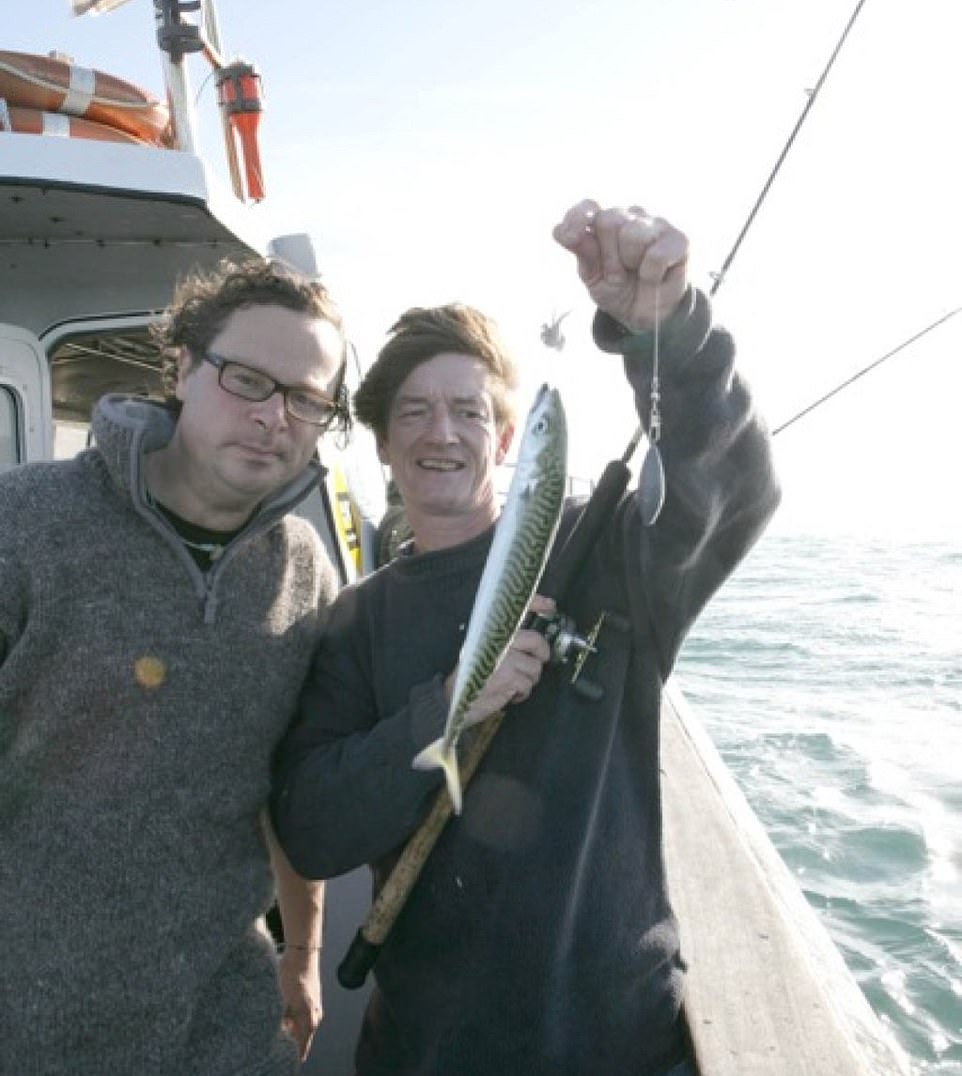 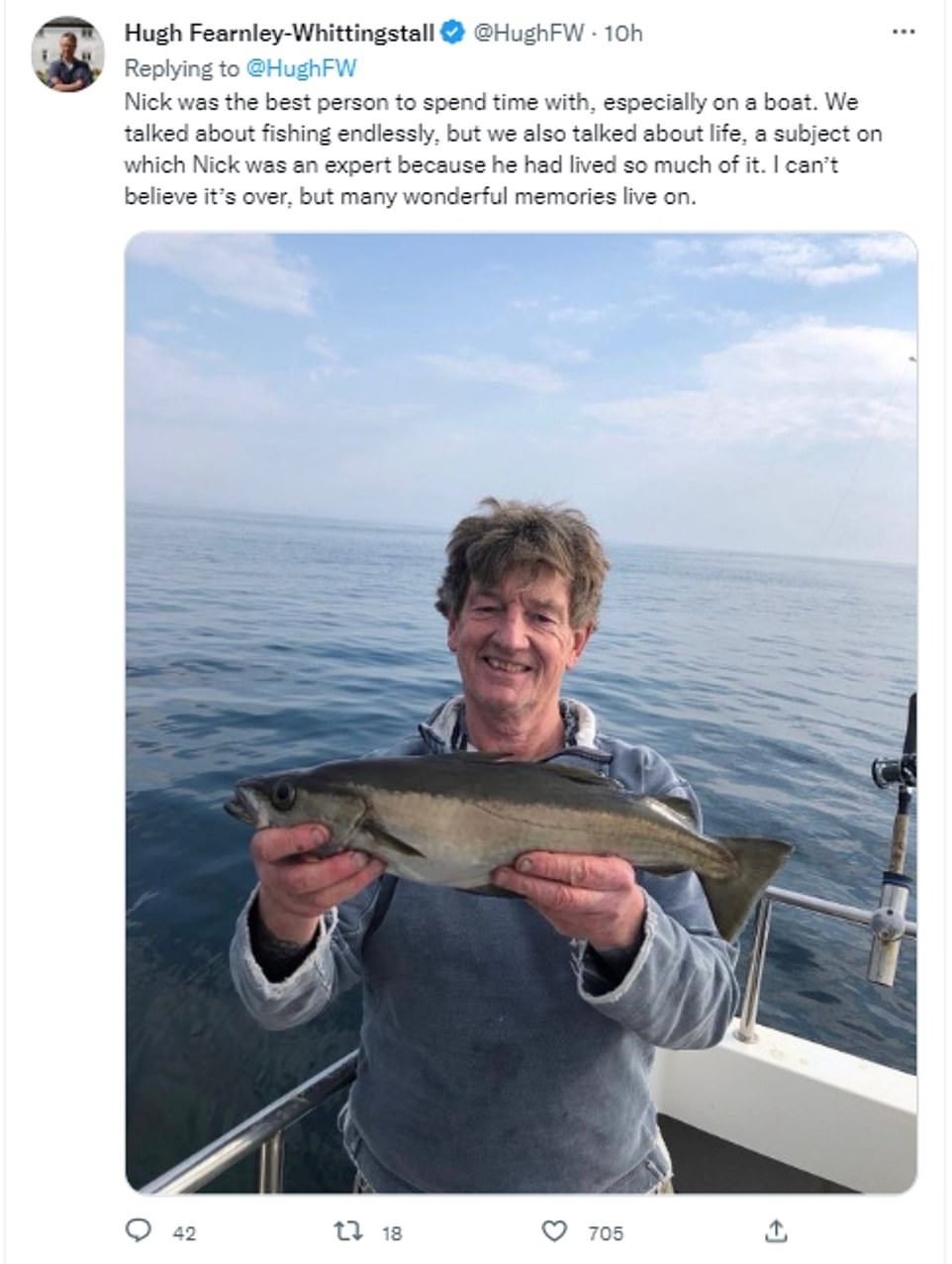 He later tweeted: ‘I am so very sad to say that our dearest friend Nick Fisher has passed away.

‘He was always full of insight and compassion, which is what made him such a great writer and broadcaster, as well as a brilliant friend.

‘His lovely family and his many friends are missing him terribly. Nick was the best person to spend time with, especially on a boat.

‘We talked about fishing endlessly, but we also talked about life, a subject on which Nick was an expert because he had lived so much of it.

‘I can’t believe it’s over, but many wonderful memories live on.’

He was also a writer of crime fiction and non-fiction covering fishing and masculinity.

Tributes poured in to Mr Fisher from fans and former colleagues after Mr Fearnley-Whittingstall announced the sad news. 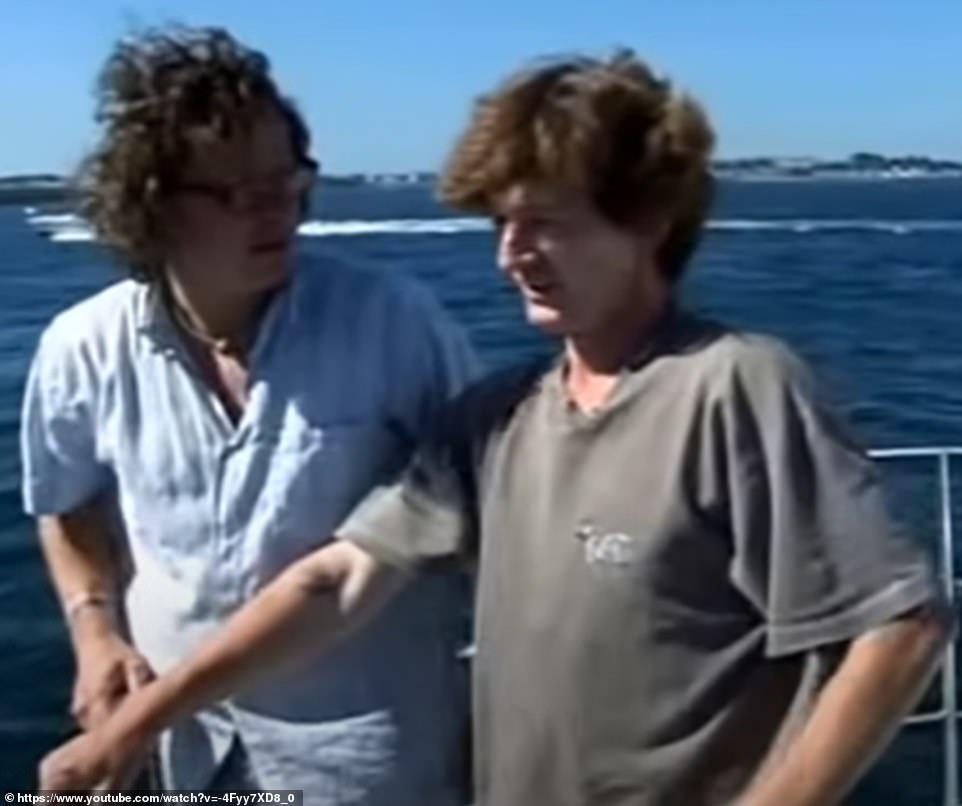 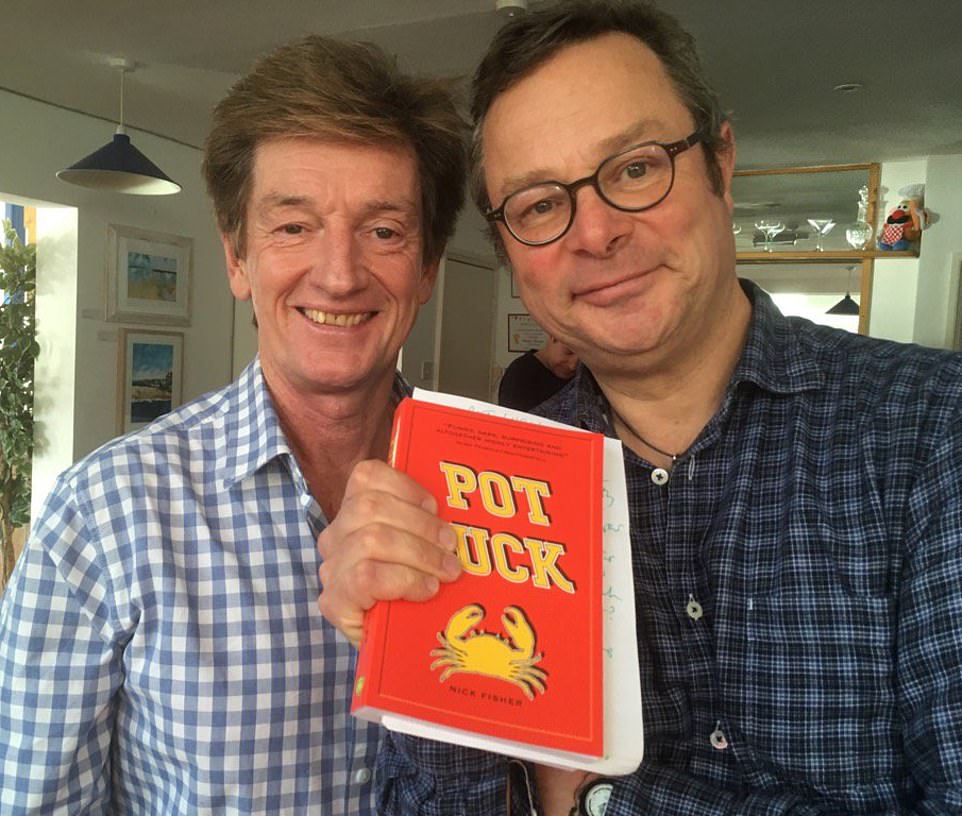 One user wrote online: ‘So sorry to read this Hugh, I spent the day with him on one of your River Cottage fishing days, he was super knowledgeable, a genuinely nice guy and super compassionate with my sea sickness!

‘My condolences to you and his family.’

Another mourner added: ‘That is so very sad. He worked with us years ago at Sony TV. He was a brilliant and funny man as well as being a lovely human being.’

A former colleague said: ‘So sorry to hear this sad news, Hugh. Many years ago I edited some daytime TV with Nick featuring ‘Clarissa’, the famous record-breaking carp. His engaging style made it interesting and fun.’

Another said online: ‘Gutted to hear this. A lovely guy and fantastic angler. May he rest in peace.’

Yesterday, Mr Fearnley-Whittingstall appealed for information on Twitter and said he was concerned for his ‘dearest friend’.

The River Cottage celebrity chef also revealed that Mr Fisher may have been seen at 5pm on Tuesday buying a cup of tea at a hotel near Dorchester, 25 miles away from his home in Hooke.

In a post he wrote: ‘I never thought I would be using social media for this, but my very dearest friend Nick Fisher, who some of you will know from his journalism and telly work, has gone missing. 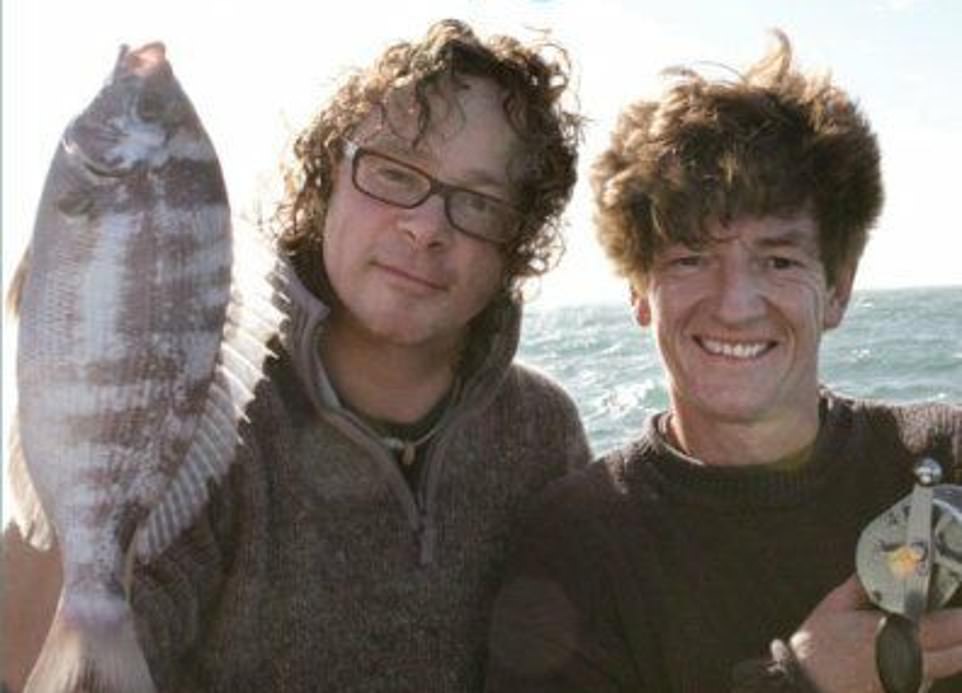 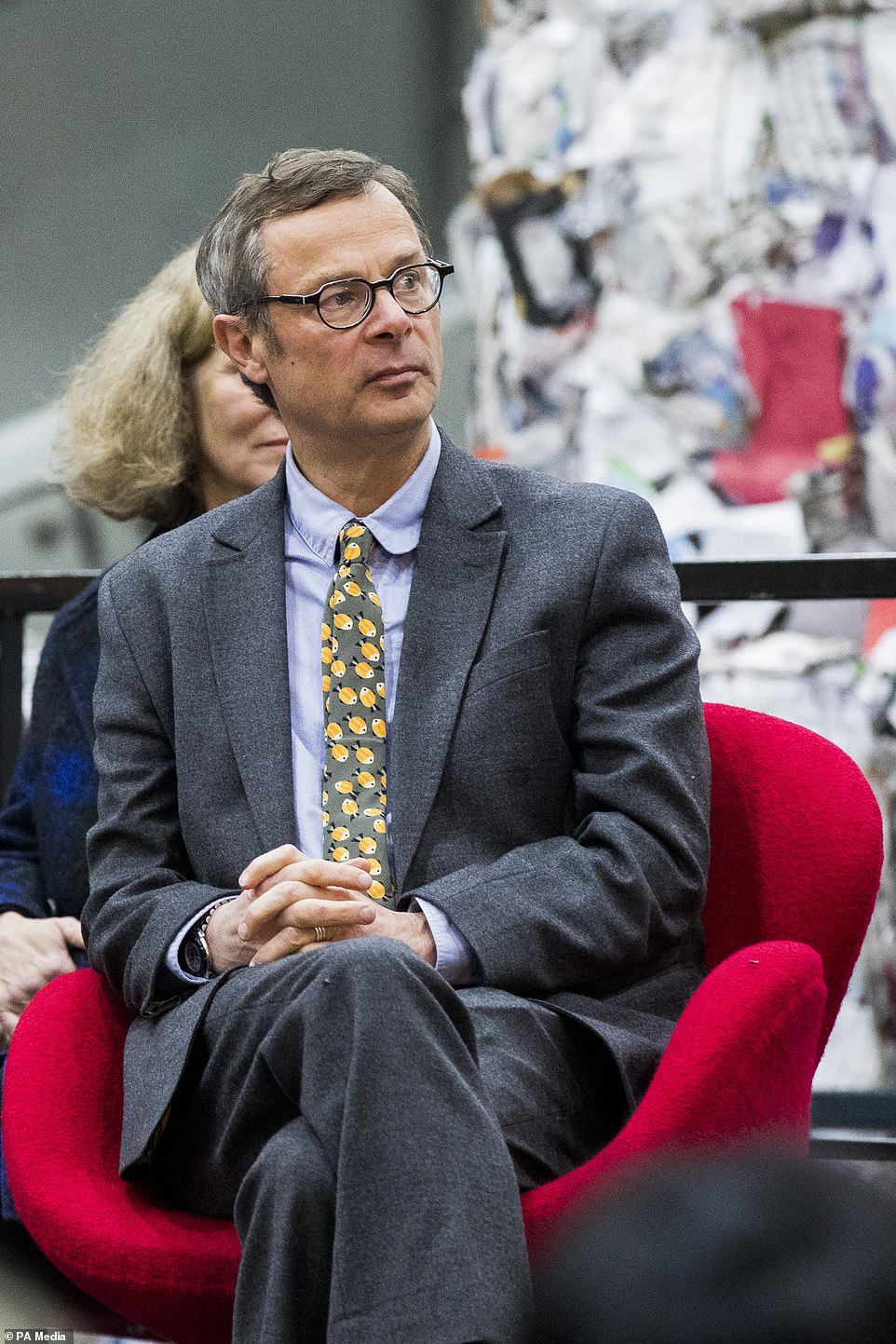 Mr Fearnley-Whittingstall mourned his friend and colleague, saying: ‘He was always full of insight and compassion, which is what made him such a great writer and broadcaster, as well as a brilliant friend’

‘He left his home in the village of Hooke near Bridport in his silver Nissan Navara YE71 DFA pick up on Tuesday afternoon, with his brown and white spaniel. The car was seen just half an hour later on a police camera near Dorchester.

‘It seems Nick might have bought a cup of tea in a hotel near there, but he didn’t stay there and he hasn’t been seen since. It’s so unlike Nick to do this and of course we are very worried for his safety.

‘We are desperate to find him and if you have seen anything at all that could help us please call 101 and quote the case number 15:644. I’m also posting the appeal from the local news website with a picture of Nick.’

The tweet was also shared by food writer and son of the Queen Consort, Tom Parker Bowles, Jonathan Ross and Piers Morgan.

Presenter Mr Morgan wrote in his post: ‘Please read this thread & inform police immediately if you have any information about Nick’s whereabouts. He’s a great guy, and his family are very worried.’

Joanna Swainson, co-founder of the literary agency that represents Mr Fisher, said that his disappearance is ‘so worrying’.

Sharing an appeal, she wrote on Twitter: ‘Nick Fisher is an author I represent. He’s super talented and an all round amazing man. He has been missing for two days. So worrying. Please share.’

Mr Fisher appeared on River Cottage after it first aired in 1999 and in 2007 they co-authored the book ‘The River Cottage Fish Book’ based on the show.