China’s African take-over: How Beijing has built infrastructure, lent billions and located its first overseas military base there – as top US general warns more could follow in new threat to America

On the west side of Djibouti City sits a sprawling military compound. Within its razorwire-topped walls are helipads, a dock large enough to fit aircraft carriers, and 2,000 troops alongside armoured vehicles and gunboats.

Opened in 2017, this is China’s first overseas military base – but could soon be one of many located across Africa if those sounding the alarm in Washington are correct.

The Department of Defense warned last year that Beijing has ‘likely’ sought bases in Angola, the Seychelles, Kenya, and Tanzania, and just this week General Stephen Townsend – America’s top brass in Africa – warned a new naval base similar to the one in Djibouti could soon appear on Africa’s west coast.

Such a base, which could be located anywhere from Mauritania to Namibia, would allow China to project its growing military might not just across the Pacific Ocean but the Atlantic too, General Townsend said.

But while the thought of Chinese military bases popping up across Africa may be new to some, in fact it is only the latest chapter in a decades-long effort to bring the continent under Beijing’s sway that has gone largely unnoticed.

‘The Chinese are outmaneuvering the U.S. in select countries in Africa,’ Gen. Townsend said as he issued his warning. ‘Port projects, economic endeavors, infrastructure and their agreements and contracts will lead to greater access in the future. They are hedging their bets and making big bets on Africa.’

China has lent billions of dollars to African nations (shaded red showing which countries have accepted cash, with darker colours indicating higher levels of debt) while building ports, power stations, railways and roads. Beijing has also built a military base in Djibouti (right), but is planning more – with ‘likely sites’ in Angola, Kenya, Tanzania, and the Seychelles (blue pentagons). But is is the possibility of a new naval base on the west coast (shaded blue) that has caused fresh alarm in the US

And he’s right. It seems that, almost wherever you look on the continent, China’s influence is being felt.

Railways? China is building them, including new lines between Mombasa and Nairobi in Kenya, Abuja and Kaduna in Nigeria, Lobito and Luau in Angola, and between Ethiopia and Djibouti.

Ports? China again, constructing or expanding no less than 41 harbours in sub-Saharan Africa up to 2019, according to a CSIS report, meaning Beijing now has a commercial interest in around one in five of the total.

Africa’s power grid is also being transformed off the back of Chinese investment. Environmentalists kicked up a stink when it emerged late last year that China has financed seven new coal-fired plants in Africa with plans for 13 more – but the country is also investing in hydroelectric, and has interests in some of the continent’s largest dams.

For example, the huge Ethiopian Renaissance Dam which spans the Blue Nile and has sparked tensions between Ethiopia and Egypt, is a project in which China is heavily involved. 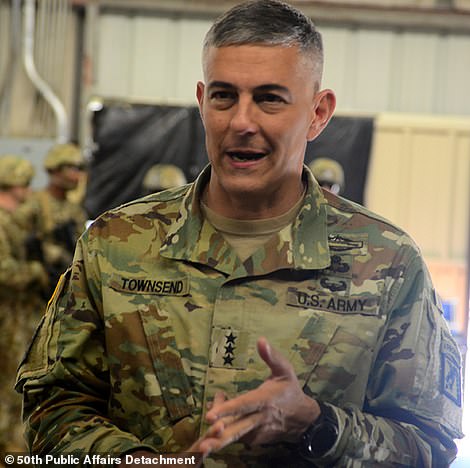 US General Stephen Townsend, who heads US Africa Command, says China has designs on naval ports on the western coast of Africa, which would give the nation easy access to the Atlantic Ocean

Meanwhile, China has lent at least $153billion to African governments to finance the development – according to the China-Africa Research Initiative – though the real total is thought to be far higher once other types of financing such as grants and direct investment are included.

The projects don’t stop there. According to The Heritage Foundation, China has built no fewer than 186 government buildings in 40 out of 54 African countries, developed 70 per cent of the continent’s 4G networks, and even built sensitive intra-governmental communications networks for 14 nations.

Even the African Union headquarters, located in Ethiopia, was full financed and build by China.

And Beijing’s interest shows no sign of slowing. In 2018, President Xi Jinping announced the creation of a $60billion pot of Chinese money specially ear-marked for development projects in Africa.

In short: If Africa needs it, then China is supplying it. And in spades.

While economic investment is hardly a threat to America on its own, it does buy Beijing influence – meaning that when Xi wants to locate a new military base on the continent, he is likely to find a host of national leaders who are more than happy to welcome him.

And it is that thought which is keeping Townsend and others at the Pentagon awake at night.

‘They´re looking for a place where they can rearm and repair warships. That becomes militarily useful in conflict,’ Townsend said in an interview with the Associated Press this week.

‘They´re a long way toward establishing that in Djibouti. Now they´re casting their gaze to the Atlantic coast and wanting to get such a base there.’

Townsend’s warnings come as the Pentagon shifts its focus from the counterterrorism wars of the last two decades to the Indo-Pacific region and threats from great power adversaries like China and Russia.

U.S. military commanders around the globe, including several who may lose troops and resources to bolster growth in the Pacific, caution that China’s growing assertiveness isn’t simply happening in Asia.

And they argue that Beijing is aggressively asserting economic influence over countries in Africa, South America and the Middle East, and is pursuing bases and footholds there.

China’s first overseas naval base was built years ago in Djibouti in the Horn of Africa and it is steadily increasing its capacity. Townsend said as many as 2,000 military personnel are at the base, including hundreds of Marines who handle security there.

‘They have arms and munitions for sure. They have armored combat vehicles. We think they will soon be basing helicopters there to potentially include attack helicopters,’ said Townsend.

For some time, many have thought that China was working to establish a Navy base in Tanzania, a country on Africa’s eastern coast, that has had a strong, longstanding military relationship with Beijing. But Townsend said it appears there’s been no decision on that yet.

He said that while China has been trying hard to get a base in Tanzania, it’s not the location he’s most concern about. 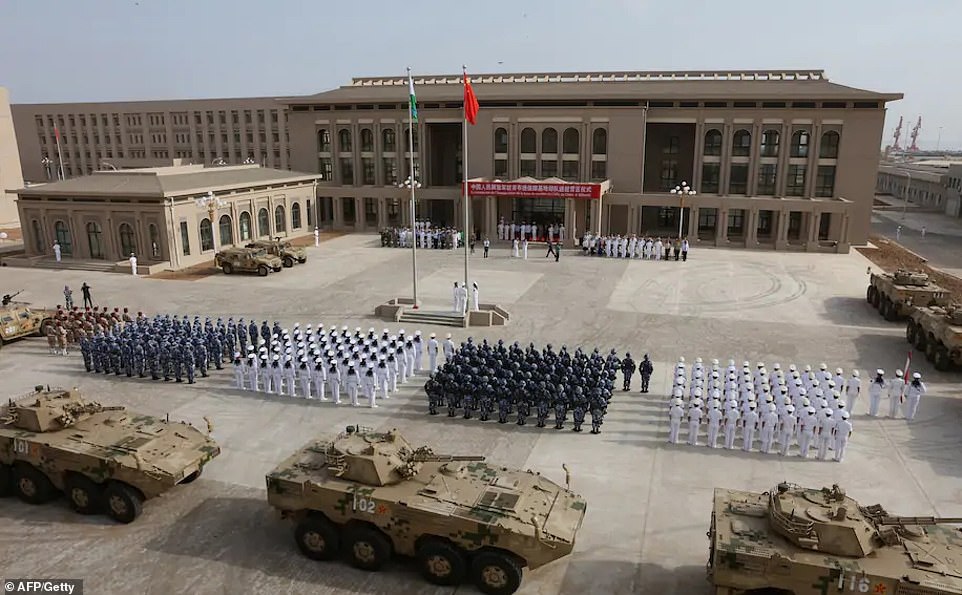 Chinese troops and armoured vehicles parade at the base in Djibouti, located at a strategic bottleneck leading to the Suez Canal, in 2017 as the base was first opened

‘It’s on the Indian Ocean side,’ he said. ‘I want it to be in Tanzania instead of on the Atlantic coast. The Atlantic coast concerns me greatly,’ he said, pointing to the relatively shorter distance from Africa’s west coast to the U.S.

In nautical miles, a base on Africa’s northern Atlantic coast could be substantially closer to the U.S. than military facilities in China are to America’s western coast.

More specifically, other U.S. officials say the Chinese have been eyeing locations for a port in the Gulf of Guinea.

The Defense Department’s 2020 report on China’s military power, said China has likely considered adding military facilities to support its naval, air and ground forces in Angola, among other locations. And it noted that the large amount of oil and liquefied natural gas imported from Africa and the Middle East, make those regions a high priority for China over the next 15 years.

Henry Tugendhat, a senior policy analyst with the United States Institute of Peace, said China has a lot of economic interests on Africa’s west coast, including fishing and oil. China also has helped finance and build a large commercial port in Cameroon.

He said that any effort by Beijing to get a naval port on the Atlantic coast would be an expansion of China’s military presence. But the desire for ocean access, he said, may be primarily for economic gain, rather than military capabilities.

Townsend and other regional military commanders laid out their concerns about China during recent congressional hearings. He, along with Adm. Craig Faller, head of U.S. Southern Command, and Gen. Frank McKenzie, head of U.S. Central Command, are battling to retain their military forces, aircraft and surveillance assets as the Pentagon continues to review the shift to great power competition.

Defense Secretary Lloyd Austin is conducting a global posture review to determine if America’s military might is positioned where it needs to be, and in the right numbers, around the world to best maintain global dominance. That review is expected to be finished in late summer.