One of the killers of honeymoon bride Anni Dewani has been freed on parole from a jail in South Africa, despite having served barely half of his 18-year sentence.

Zola Tongo, now 42, was convicted for his part in the murder after he pleaded guilty to hiring two men to kill Anni, 28, in Gugulethu township, near Cape Town on November 13, 2010.

Anni was killed in the back of Tongo’s taxi, suffering a single gunshot to her neck after her new husband fled the vehicle, which was later found abandoned with her body in it.

Tongo claimed Anni’s new husband Shrien Dewani had ordered the hit whilst the couple were on their honeymoon.

The taxi driver pleaded guilty to his part in the murder, and was sentenced to 18 years. Her husband Dewani was cleared of all charges in 2014.

Tongo was due to be released from Malmesbury prison on parole in 2020, but was kept behind bars after opposition from Anni’s family.

But he was released on parole on Tuesday after his lawyers were successful in arguing for his release. 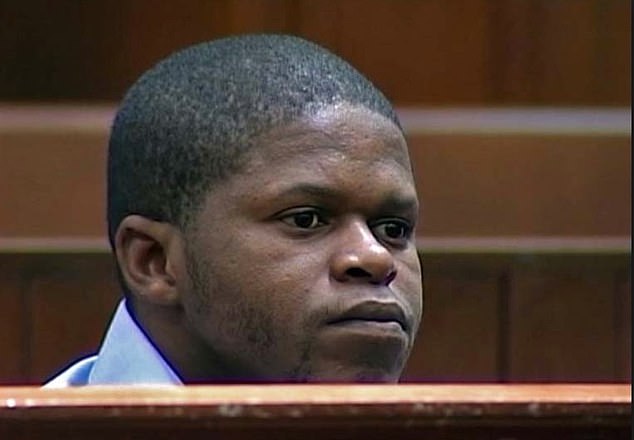 Zola Tongo, now 42, was alleged to have hired two men to kill Anni, 28, on the orders of her new husband in Gugulethu township, near Cape Town on November 13, 2010. He is now set to be released from prison on June 21 after successful pleading for parole

Tongo’s parole was granted on a number of conditions, including house detention, a community service order and a ban of drinking alcohol and taking drugs.

Rynold Sedeman , chairperson of the parole board, said Tongo must undergo treatment from a psychologist and be assessed by social workers while on parole.

Tongo’s house arrest will be in place for the first year of his six-year parole, after which he will be a completely free man – providing he doesn’t breach the conditions.

He must also submit to High Risk subversion monitoring for 12 months, and has been ordered not to intimidate or threaten anyone, commit a crime or contact the victims.

South African law states that a convicted criminal who is serving 25 years or less in prison is eligibly for parole after serving half their sentence.

Swedish-born Anni had been married for only a few weeks to British millionaire nursing home boss Shrien Dewani, now 42.

He said his life was spared as the two gunmen forced him out of the vehicle at gunpoint, before murdering his new bride.

Dewani was accused of organising the hit on his engineer wife with the taxi driver and paying him and two accomplices. 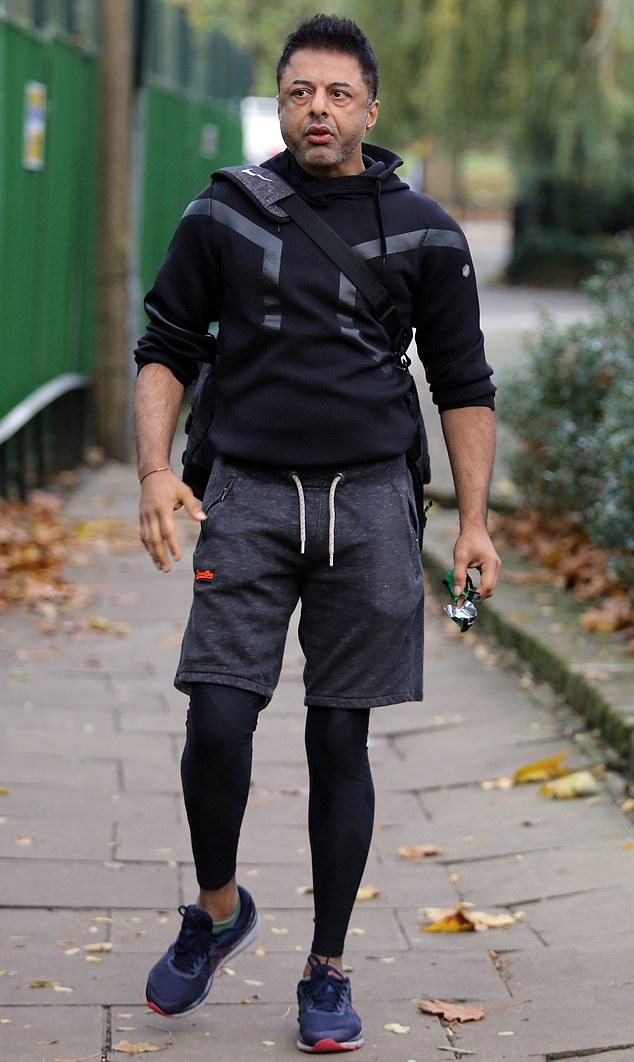 Dewani (pictured above), 42, was pictured leaving his £3.5m flat in an exclusive London area in 2020

Prosecutors said Dewani — a successful British businessman also of Indian origin — was so desperate to get out of an unwanted marriage that he recruited a cabbie to kill his wife during a staged carjacking.

Dewani was arrested in Britain, but resisted extradition to South Africa to answer charges of suspicion of conspiracy to commit murder.

That set in motion a long extradition battle — delayed by Shrien’s confinement to a psychiatric hospital in Britain.

Dewani was eventually extradited to South Africa in 2014 to stand trial.

During his trial, he admitted he had been leading a secret double life and that he had seen male prostitutes.

One of these men was known as ‘The German Master’ who flew to Cape Town to give evidence of his meetings with Dewani.

But the judge Jeanette Traverso refused to allow the prosecution permission to present him to the court as a witness.

The German Master, whose real name was Leopold Leisser, was found hanged in his Birmingham home in November 2016.

Dewani was declared innocent by the court in Cape Town in December 2014.

The judge threw out the case, saying she was not prepared to rely on the evidence of three convicted men and that the case against Dewani was riddled with lies.

Dewani was only brought to South Africa from Britain for trial four years after his wife died after experiencing trauma and mental health issues as a result of the murder.

On returning to Britain after being cleared, Dewani found new love with Brazilian photographer Gledison Lopez Martins and has travelled to Mumbai, where he married Anni, with his boyfriend. 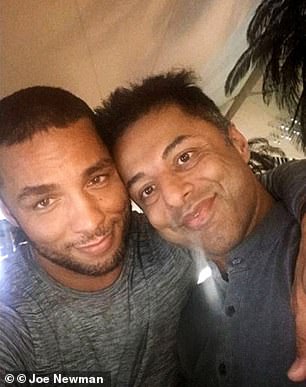 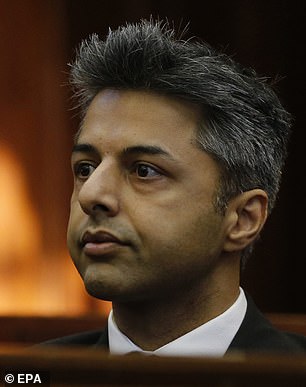 Mr Dewani (right) was cleared of involvement in Anni’s murder during a trial in South Africa. Following the court case, Mr Dewani, who is bisexual, has found new love with Brazilian photographer Gledison Lopez Martins (seen together left)

But Tongo was sentenced to 18 years in prison whilst hitman Mziwamadoda Qwabe also pleaded guilty to murder and is serving a 25-year sentence. The man who fired the shot that killed Anni, Xolile Mngeni, died from cancer in prison while serving his sentence.

Tongo was first set to be released in August 2020 on parole.

However, after the parole board decided to release him, an appeal by Anni’s father and her uncle led to a rethink.

Tongo was visited in his cell and was grilled face-to-face to reveal the truth of what happened but he gave nothing away and Anni’s family demanded South African authorities revoked his parole.

Tongo had packed his bags and said goodbye to his cellmates and his family had driven up to Malmesbury Prison 40 miles outside of Cape Town to pick him up.

But with less than 24 hours before he was due to be released, Tongo’s freedom was taken away again. 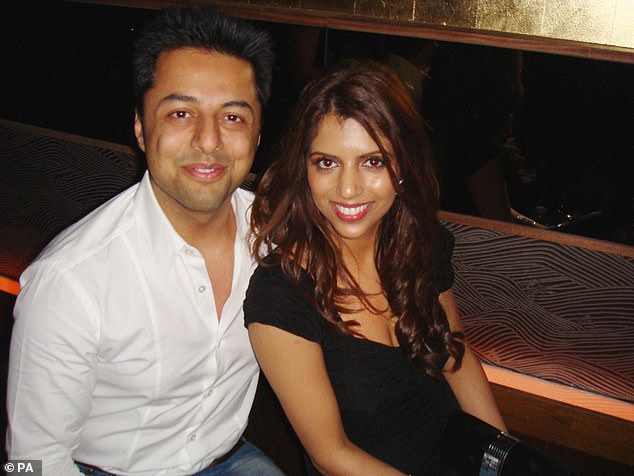 Anni was killed in the back of a taxi on honeymoon with her new husband in a Cape Town township on November 13 2010. She suffered a single gunshot to her neck after her husband fled the taxi which was later found abandoned with her body in it

Dewani has spoken only once about her death publicly since he was cleared.

In a letter to a London coroner in November 2016, he referred to the three convicted men as ‘liars’, stating that there had been an attempt to frame him.

He wrote: ‘I would like to make clear that I have a significant number of questions which remain unanswered about the night that my wife and I were kidnapped and Anni was tragically shot after being taken away from me.

‘Each of the gang members did a deal with the authorities to gain either full immunity or vastly reduced sentences in return for providing evidence against me.

‘It is the evidence of these proven liars that led to a witch hunt against me and the resulting failure to pursue the truth of what happened that night.

‘It is clear that none of the evidence provided by these persons was corroborated in any meaningful way.

‘This has allowed the individuals concerned to literally get away with murder. I understand and share the Hindocha (Anni) family’s frustrations.

‘However the extent of my knowledge of the events leading up to Anni’s murder has already been set out in a detailed publicly available plea. This document was read out in court at the start of my trial.’