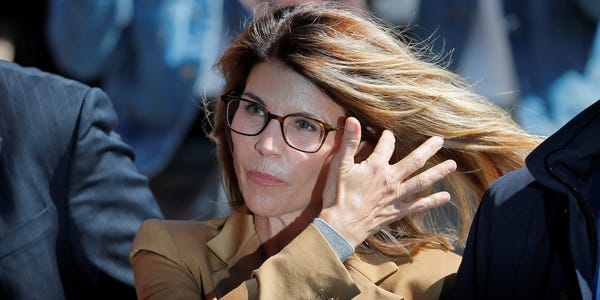 Lori Loughlin will start her prison sentence for her role in the college admissions scandal in November, after a judge recently signed off the actor's request to stay at a facility near her California home, according to court documents seen by Insider.

The federal correctional institution where Loughlin will be staying is in Victorville, California. It's a medium-security prison located two hours from Los Angeles.

As part of her sentence, Loughlin will serve two months in prison for her role in the scandal, in which she and her husband, Mossimo Giannulli paid $500,000 to guarantee their daughters' admissions to the University of Southern California. Loughlin will also pay a $150,000 fine, complete 100 hours of community service, and spent two years on supervised release.

While behind bars, Loughlin will be staying in Victorville's minimum-security camp, which is currently holding about 185 women. She will have to adhere to a strict schedule and wear a uniform, but she'll also have access to classes like ceramics, spinning, and Pilates.

When she starts her sentence — which is set to begin by November 19 — this is what her daily life will look like.

Loughlin will stay in open dormitory cubicle housing while at Victorville, which has two- and four-person cubicles.

In most cases, these cubicles have short walls that act like partitions — an example of such rooms can be seen in the Netflix TV show "Orange is the New Black."

According to Victorville's handbook for its satellite camp, lights will turn on every morning at 5:30 a.m., and beds must be made by 7:30 a.m. on weekdays.

Facility staff count inmates at specific times throughout the day, including midnight, 3 a.m., 4 p.m., and when lights are turned off, at 9:30 p.m.

Loughlin will have to wear a green uniform, just like everyone else

Inmates at Victorville are required to wear green trousers, a green shirt, and issued safety shoes, according to the facility's handbook.

Outer shirts must be buttoned between 7:30 a.m. and 4 p.m., and house and shower shoes are only allowed to be worn in housing units and the unit's outside yard area.

Like all other inmates, Loughlin will be required to shower every day and have her hair neatly groomed.

It also offers a number of hobby crafts, like calligraphy, beading, landscape painting, origami, and crochet, and instrument classes on the accordion, drums, ukulele, and guitar.

Loughlin and other inmates can also take classes on nutrition, wellness, anatomy, ceramics, and more.

It's unclear if Loughlin will partake, but many inmates work jobs while in the prison, which include, food and trash services, plumbing, painting, education, and auto parts inventory, according to the Los Angeles Times.

Visiting at the facility is currently suspended because of COVID-19, but Loughlin will be given 300 minutes on the phone per month

Inmates at Victorville are allowed to make telephone calls to friends and family outside the prison when they're not working.

Each inmate is given 300 phone minutes per month, and calls are limited to 15 minutes each.

In-person visits have been suspended for the time being, likely because of the novel coronavirus pandemic. The ban means Loughlin won't be able to see her two daughters, Olivia Jade Giannulli and Isabella Giannulli, in person until her sentence is completed.

She will also be unable to speak with her husband during her own sentence, because he, too, will be behind bars at a low-security federal prison for men in Santa Barbara County.

It's unclear if Loughlin will be provided with generic toiletries when she arrives at Victorville, but if she wants to upgrade, the prison's commissary offers a number of brand-name toothpastes, shampoos, deodorants, and more.

She can also buy postage stamps, over-the-counter medications, and dozens of snack items including ramen, oatmeal, popcorn, and chocolate bars.

Loughlin and other inmates are allowed to spend $360 a month at the prison's commissary, according to the prison's handbook.

Other celebrities served sentences at FCI Victorville before Loughlin

Loughlin isn't the first celebrity to serve time at Victorville.

"Dance Moms" star Abby Lee Miller completed an eight-month sentence at Victorville in 2018 after being convicted of bankruptcy fraud.

Former MLB outfielder Lenny Dykstra also served time at the prison — he spent six and a half months behind bars in 2013 after being convicted of bankruptcy fraud and money laundering.