Health and Safety Executive admits own staff involved in accidents

It is supposed to look after our health and safety at work – but the Health and Safety Executive has made the embarrassing admission its own staff have been involved in hundreds of accidents.

A total of 218 incidents, including 57 that required either first aid or hospital treatment, took place at the Government agency between April 2015 and April 2020, figures released under Freedom of Information rules show.

Ten were classified as ‘major’ injuries because the Health and Safety Executive (HSE) employee suffered pain for seven days or more afterwards. 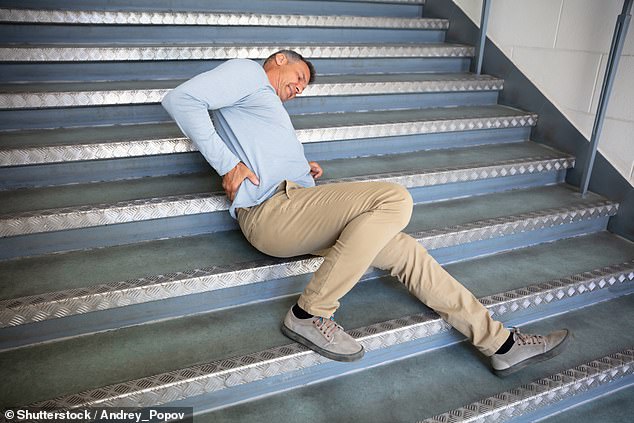 A total of 218 incidents, including 57 that required either first aid or hospital treatment, took place at the Government agency between April 2015 and April 2020, figures released under Freedom of Information rules show. Pictured: Stock image

The data reveals most of the mishaps involved slips, trips or falls but there were also incidents where workers were hit by a ‘moving vehicle’, ‘exposed to harmful substances’ or were injured after coming into ‘contact with machinery’.

In 2018, an HSE employee was awarded £1,500 compensation after falling off an office chair, although the agency recouped £3,000 from suppliers ‘due to the fact that the root cause of the incident was a design fault’.

According to its latest annual report, the HSE’s purpose is to ‘prevent work-related death, injury and ill health’, adding: ‘The world and our approach may change but one thing remains the same – the commitment of those who work for HSE to reduce risk, protect people and the environment and to save lives.’

Last night, an HSE spokesman said details were being released after it decided ‘on balance’ that it was in the public interest to disclose the number of staff accidents and injuries.

Jonathan White, legal director of National Accident Helpline, said: ‘Unfortunately, accidents can happen anywhere. In an office, cables, untidy files and paperwork or wet floors can lead to slips and trips, while faulty equipment could lead to shocks and other injuries.

‘Employees should, of course, be careful in the workplace, just as they would be at home or walking down the street.

‘But if something did happen in the office which wasn’t their fault, it’s important to remember that all employers have a duty of care to keep their staff safe at work – and if that duty is breached, the employee may have grounds to make a claim.’

From April 2019 to March 2020, the agency successfully prosecuted 336 cases against employers.

Seven led to fines of more than £1 million and 54 resulted in a custodial sentence or community service.