Good Covid news: Fewer than 1,000 infected patients are in hospital

The good Covid news: Fewer than 1,000 infected patients are now in hospital – 40 TIMES fewer than at peak of second wave, ICU death rates have HALVED with drugs, and average age of patients falling seriously ill has dropped by a decade to below 50

Covid hospital admissions are still only a fraction of what they were at the peak of the second wave in January, according to official data that will bolster calls for No10 not to delay England’s June 21 ‘Freedom Day’.

Fewer than 1,000 Covid patients were on wards across the country at the end of May – 773 on May 31, which has since risen slightly to 860 – just 2 per cent of the peak in early January when there were nearly 40,000 beds taken up by the infected.

And the average age of patients being admitted to hospital has plunged by a decade to below 50 for the first time during the pandemic, thanks to vaccines protecting millions of vulnerable older people who were prioritised in Britain’s inoculation roll-out.

Scientific breakthroughs in finding drugs to help seriously ill patients, such as dexamethasone and budesonide, have also helped the death rate in intensive care halve since January, dropping from 40 per cent of all those admitted to less than 20 per cent.

The positive figures will inevitably put further pressure on Boris Johnson not to delay England’s roadmap — which is still set to see nightclubs reopen and weddings allow more than 30 guests by June 21.

But No10 is reportedly considering pushing the date back by at least two weeks after England’s chief medical officer Professor Chris Whitty and chief science adviser Sir Patrick Vallance spooked officials that unlocking too early could fuel a third wave.

Ministers reportedly plan to delay the unlocking to leave enough time for all over-50s to get their vaccines, plus two weeks to allow time for the jabs to take effect. MailOnline analysis suggests all over-50s in England could be fully protected against Covid by July 1 — nearly two weeks after ‘freedom day on June 21.

It comes as Matt Hancock today told 4million people in Greater Manchester and Lancashire to ‘minimise travel’, get tested and meet outdoors amid the spread of the Indian variant, in a sign Freedom Day may be pushed back.

Mr Johnson said yesterday he could still see nothing in the data that suggested a pause would be needed. Sources say ministers will not take a decision until June 14, a week before the final easing is set to go ahead. 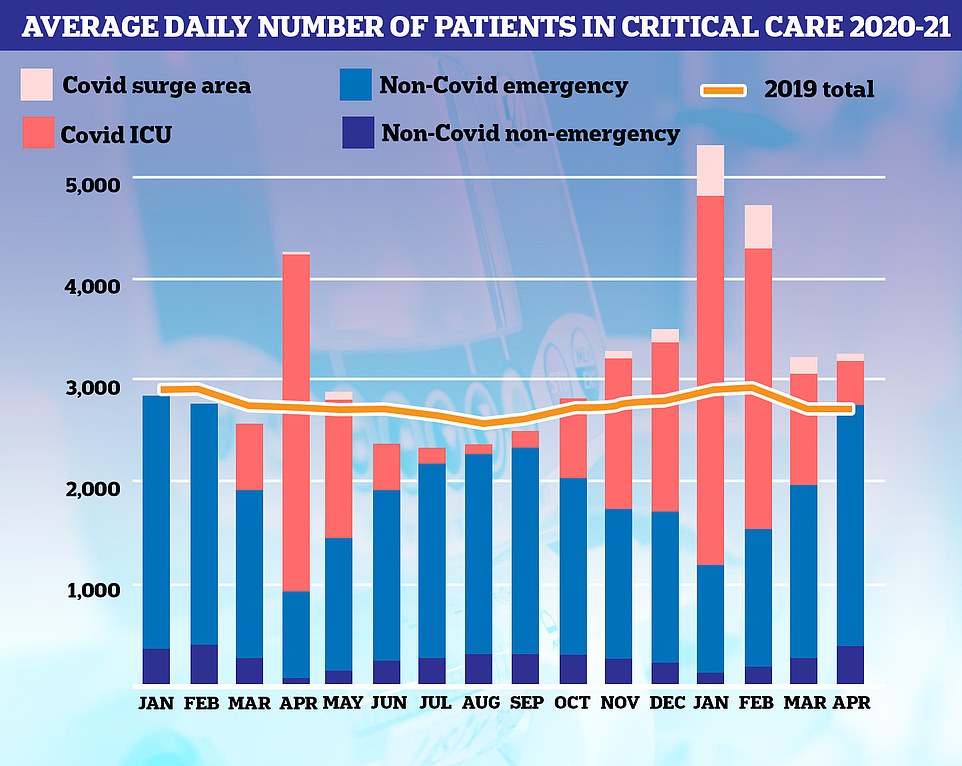 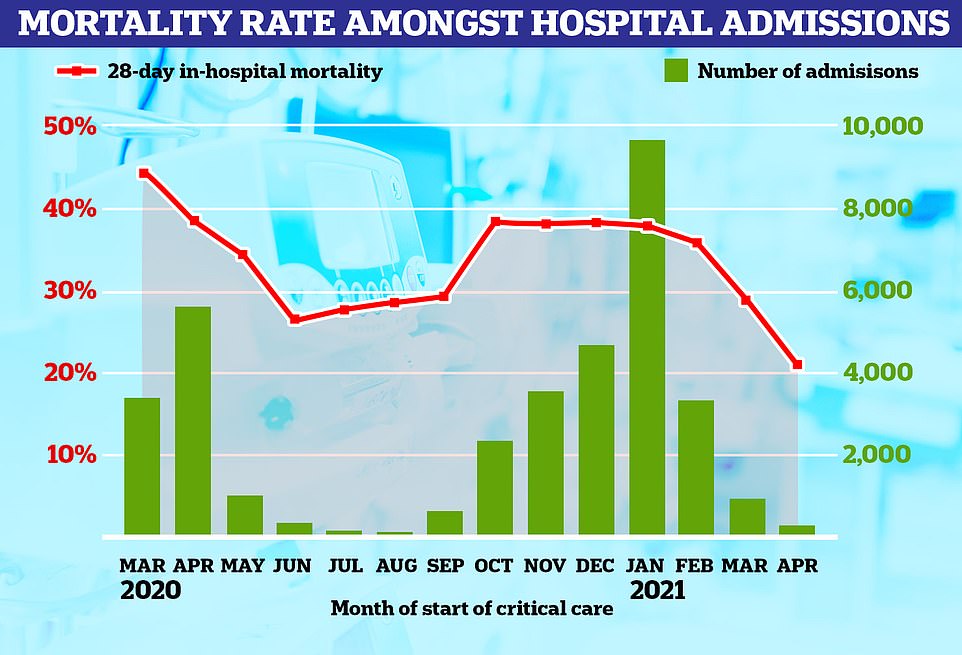 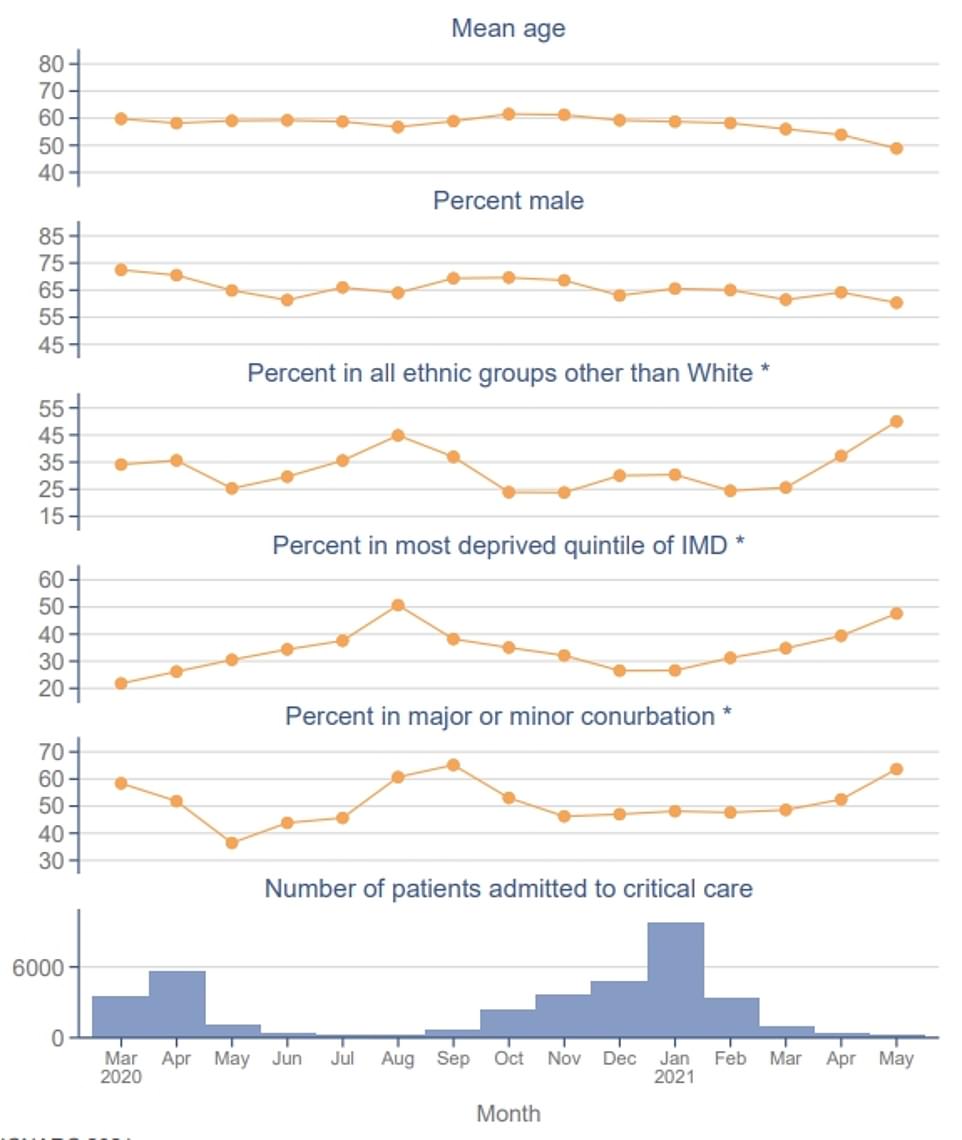 The age of patients admitted to intensive care suffering from the virus has fallen (top graph) since the start of the pandemic. The average is now 50 years, compared to 60 years last March

Up to 4million people living in Greater Manchester and Lancashire face lockdown rules creeping back into their lives as the Government has urged them not to leave the area and to avoid meeting people indoors to stop Covid.

The North West areas are hotspots for the Indian ‘Delta’ strain and are now being sent ‘enhanced support’ from the military and Department of Health including surge testing and contact tracing to try and contain the variant.

NHS boards in the area will split from national policy and allow anyone over the age of 18 to book a vaccine in a bid to boost protection.

Health Secretary Matt Hancock today asked local people to get tested for coronavirus and said: ‘We know that this approach can work, we’ve seen it work in south London and in Bolton in stopping a rise in the number of cases.’

Both places were added to the ‘coronavirus restrictions’ page of Government guidance under the heading ‘If you’re in an area where the new Covid-19 variant is spreading’, alongside other parts of the North West, Leicester, Hounslow in London and North Tyneside. They cover a total of 5.7million people – around 10 per cent of England. Manchester’s Mayor Andy Burnham insisted: ‘It is not a lockdown.’

The move comes amid claims that science chiefs Professor Chris Whitty and Sir Patrick Vallance have spooked No10 into pushing back plans for June 21’s ‘Freedom Day’ total unlocking citing fears of a third wave.

The top advisers reportedly gave a ‘fairly grim’ update on the situation to ministers, underlining that jabs can never provide 100 per cent protection and the new variant is significantly more transmissible so will cause more cases.

Whitehall sources said contingency plans are being drawn up for a possible delay of ‘between two weeks and a month’ to give scientists more time to consider data and allow the NHS to carry out more vaccinations.

Matt Hancock added that it is still likely to be another couple of weeks before advisers and ministers can fully understand how well the vaccines work against the now-dominant Delta strain.

Boris Johnson is expected to confirm by next Monday at the latest whether the June 21 plan will go ahead and he is running the roadmap timetable down to the wire, so far refusing to give any indication of what he will do. His spokesman said today: ‘We need to take the time as built into the roadmap to consider the data.’

Covid patient numbers are still very low and at just 2.5% of the January peak

Covid patient numbers in UK hospitals are still very low, despite warnings they could surge due to the spread of the Indian variant.

Department of Health data shows they are at just 2.5 per cent of the peak in the darkest days of January.

There were 900 patients suffering from the virus in hospitals over the seven days to May 31, the latest available, a similar level to the start of the month.

For comparison, at the peak of the second wave around 38,000 Covid patients were in hospital beds.

It was feared that hospital admissions with the virus would start to rise amid the rapid spread of the Indian variant.

But figures are yet to show a sudden peak, with hospitalisations now falling in Bolton which was the first place to be hit by the variant.

Experts say vaccines have broken the link between rising cases and upticks in hospital admissions.

But ministers are waiting for clearer data to confirm that is the case before pressing ahead with any unlocking plans.

Only 5% of hospital patients end up in intensive care

While Covid hospitalisations remain very low, the number of patients who end up in intensive care or needing mechanical ventilation is even smaller.

Department of Health data shows 3,493 people suffering from Covid were admitted to hospital in May and 169 to the intensive care unit (ICU).

This means just 4.8 per cent of Covid patients admitted to hospital ended up in intensive care.

For comparison, there were 56,457 Covid patients admitted to hospitals across the country in the first two weeks of January, and 3,816 (6.7 per cent) patients were taken to intensive care.

The South West, South East, East of England and Wales all had fewer than 10 people go into intensive care across May – four, eight, six and two, respectively.

The discovery of drugs that can save people from dying of Covid have dramatically boosted survival rates in ICU, too, with the death rate halving to around 20 per cent from 45 per cent in the first wave, The Telegraph reports.

Medicines such as the steroid dexamethasone and arthritis drug tocilizumab have both helped to cut the risk of death for hospital patients since they were proven to work in June and January.

An intensive care admissions report shows the average age of Covid patients has fallen by 10 years since the start of the pandemic amid a successful vaccine roll out.

The Intensive Care National Audit and Research Centre (ICNARC) said patients were aged 60 on average during last March, at the start of the pandemic.

But the average age has fallen to 50 years during the last three months. 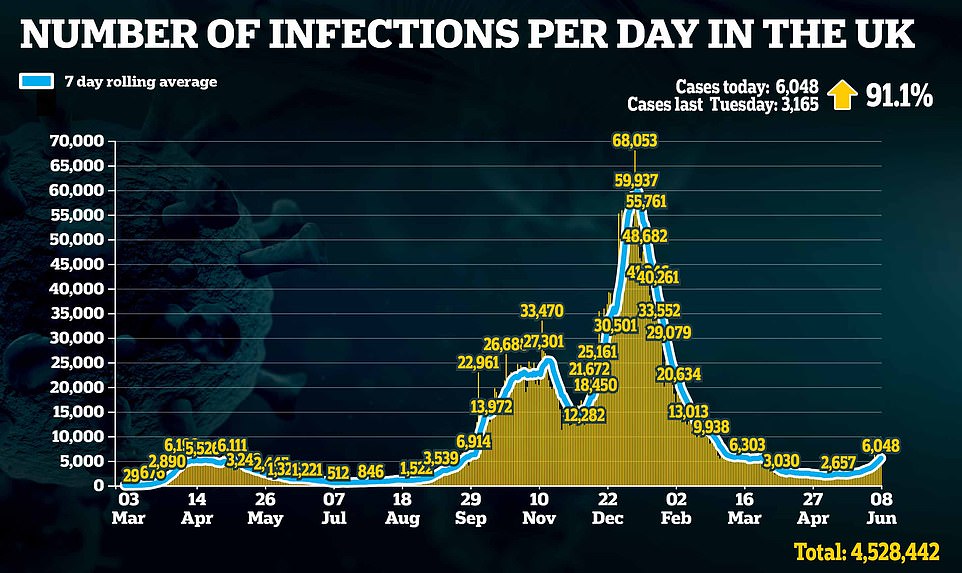 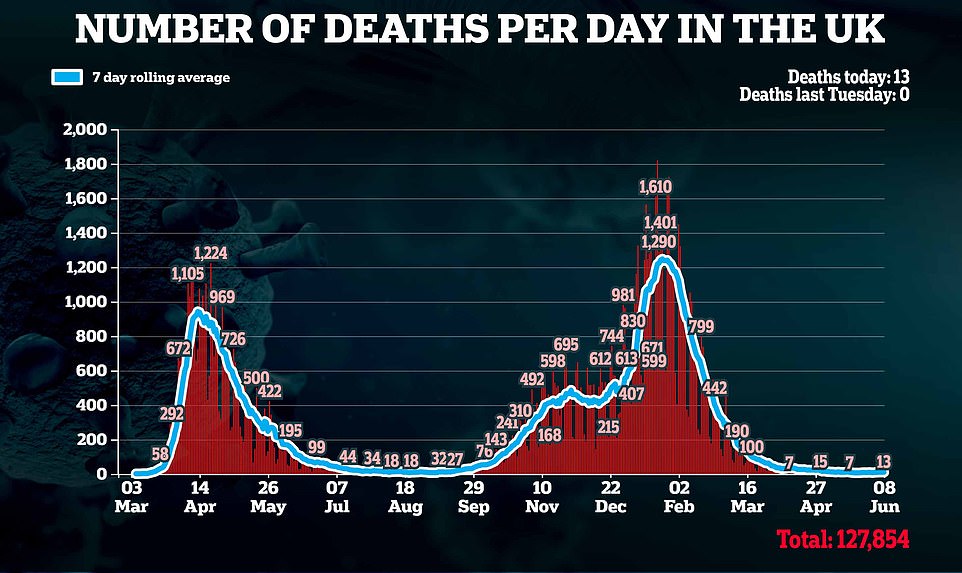 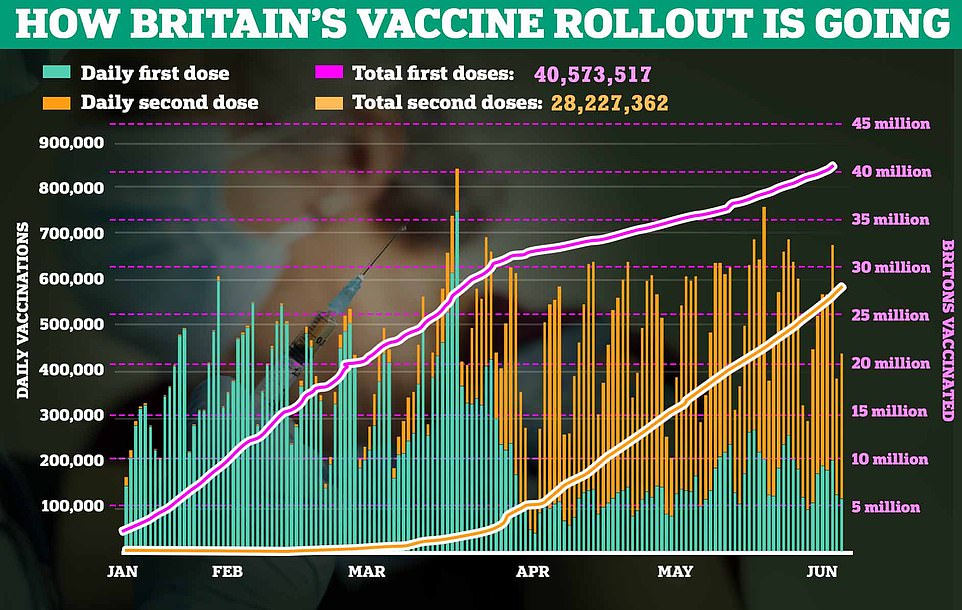 The vaccine roll out prioritised older age groups first, because they are more at risk of hospitalisation and death if they caught the virus.

And the above results show the drive is working, pushing down hospitalisations among older groups.

More than 40.4million Britons — or three in four adults — have received at least one dose, and more than 27.9million — or over 50 per cent — have got both jabs.

The Indian variant is susceptible to vaccines

There has been mounting alarm over the rapid spread of the Indian variant which has now reached more than 85 per cent of areas in England.

But studies show it is just as susceptible to vaccine-triggered immunity as the old virus.

Bolton — one of the first places hit by the variant — is now seeing its hospitalisations with the virus fall after surge testing to root out every case.

Matt Hancock yesterday told the Commons that only three of the 126 patients in hospital suffering from the variant had been vaccinated.

He added that 28 had received one dose, and 83 were yet to get their jabs. No data was available for the other 12 hospitalised patients. 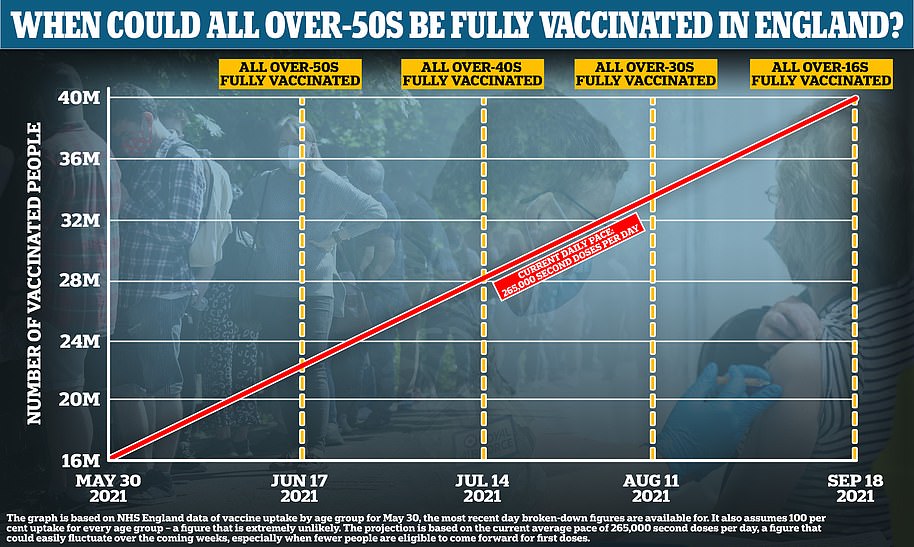 All over-50s in England could be fully protected against Covid by July 1 — nearly two weeks after ‘freedom day on June 21 — but it will take until September for all adults to have had two jabs, MailOnline analysis can reveal

All over-50s in England could be fully protected against Covid by July 1 — nearly two weeks after ‘freedom day on June 21 — but it will take until September for all adults to have had two jabs, MailOnline analysis can reveal.

The figures will boost calls for the Government to delay opening up all restrictions on June 21 for a fortnight in order to ensure the most vulnerable members of society have all had time for both doses to have had an effect.

And it comes amid claims that science chiefs Professor Chris Whitty and Sir Patrick Vallance have spooked No10 into pushing back plans for June 21’s ‘Freedom Day’ total unlocking citing fears of a third wave.

Experts say the vaccine forecast supports the case for a delay in reopening because one dose of vaccine can be as little as 30 per cent effective against the Indian coronavirus variant that is now dominant in the UK.

Cases are currently rising by around 40 per cent a week and new infections will be well above 15,000 a day by June 21, although it remains to be seen if the full vaccination of older Britons will keep hospital occupancy low.

But opponents of a postponement believe the vaccines have successfully broken the link between cases and hospitalisations, and argue the economic cost of a delay would be greater than that caused by a third wave this summer.

MailOnline analysis of official figures shows all people aged 50 and above could all of had their second vaccine dose by June 17, with a full immune response coming two weeks later.

But over-16s will not have received by their final inoculation until September 14, fueling concerns a surge in Covid infections caused by the Indian variant will result in a spike in deaths and hospitalisations among the unvaccinated.

And experts today told MailOnline the figures suggest the Government would be right to delay by two weeks in order to ensure all over-50s have had their second dose and are protected.