‘I couldn’t breathe, I couldn’t talk:’ Florida free diver, 21, who drifted at sea for FOUR HOURS recalls his ‘heart sink’ as sun started to set before his family miraculously spotted him

A young free diver who found himself lost at sea for more that four hours last week has recounted his harrowing ordeal – and miracle rescue – in an emotional interview to Today.

Seated side by side with his mother who helped save him, 21-year-old diver and spear fisherman Dylan Gartenmayer delivered his account of the scary experience, in which described losing hope while waiting to be found as the sun started to set.

The incident transpired just under a week ago several miles off the Florida Keys, and ultimately culminated in the diver being saved, thanks to his quick-thinking family who launched their own search party upon hearing of his plight.

Spearfishing without an oxygen tank – as is standard in free-diving – Gartenmayer became stranded at sea last Thursday, after the powerful Gulf Stream current overtook him and pulled him into deeper waters than he had intended.

Scroll down for video: 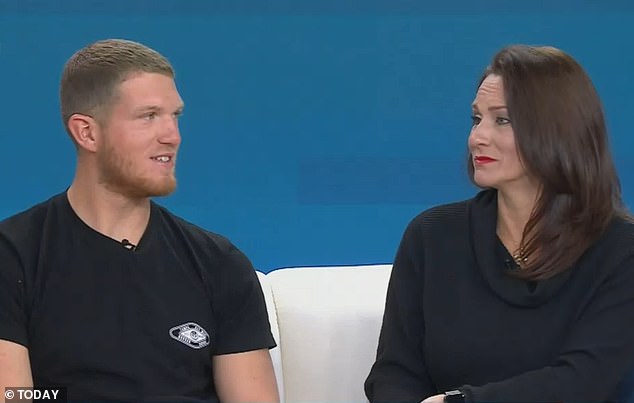 Diver and spear fisherman Dylan Gartenmayer, 21, sat side by side with his mother, Tabitha, while delivering his heart-rending account of the scary experience, which transpired just under a week ago several miles off the Florida Keys 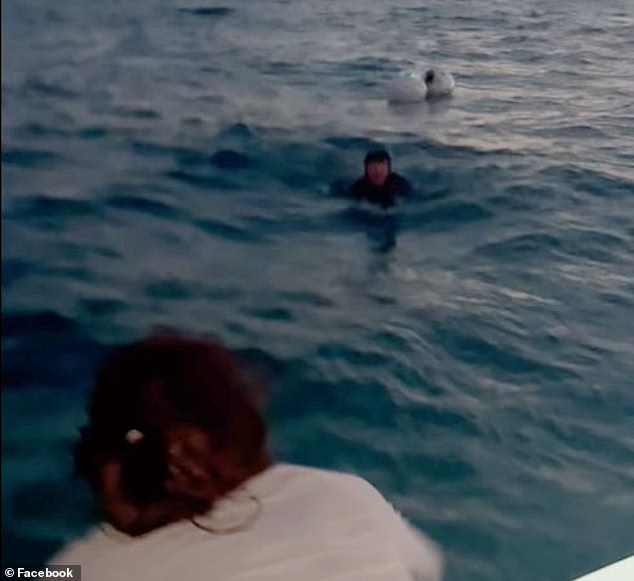 Family members including the veteran swimmer’s mom a launched a search operation that saw him discovered more than four hours later, clinging to two buoys he tied together to form a makeshift raft just as the sun was setting

Separated from his friends – and just a few hours from sunset – Gartenmayer, a Florida native who grew up spearfishing in the Keys, described surfacing out of breath to his friends’ boat nearly out of sight, in scary, unfamiliar territory.

‘I was just getting dragged further and further and I could watch the boat getting smaller,’ Gartenmayer said. ‘It was like, okay, this is starting to get serious for sure.’

Forced to tread water was his friends disappeared into the distance, the experienced diver quickly realized the gravity of situation, and swam to a nearby reef where he cut free mooring buoys to form a makeshift raft.

Knowing that his best chance of being saved was to await rescue, Gartenmayer, as the hours passed, managed to stay afloat as best as he could, but knew that his chances were slim – as the sun rapidly set and twilight descended on the Gulf. 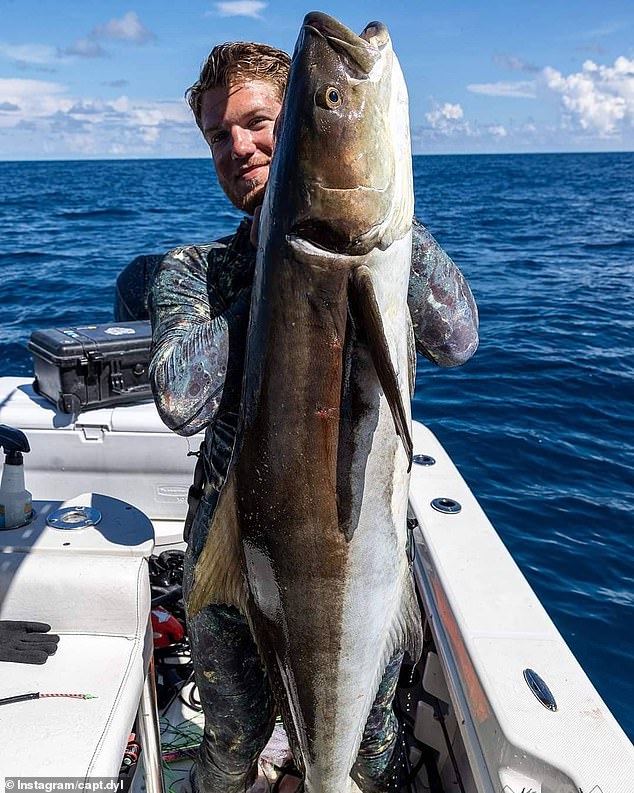 Forced to tread water was his friends disappeared into the distance, the experienced diver quickly realized the gravity of situation, and managed to survive until he was spotted

‘Watching that sun drop was kinda like making my heart sink,’ the seasoned swimmer said, describing his deteriorating hope. ‘I was like, this is going to be a long night out here.’

As temperatures began to drop, Gartenmayer said it was thanks to the buoys that he was able to to get up as high as he could.

‘That [was] the idea with the buoys,’ Gartenmayer said. ‘Trying to get up as high as I can, get a little warmth and less of my body in the water for potential predators.’

During this stage of the of interview, his mom Tabitha – who was apart of the family-led search party who eventually found Gartenmayer – appeared perturbed by her son’s account. 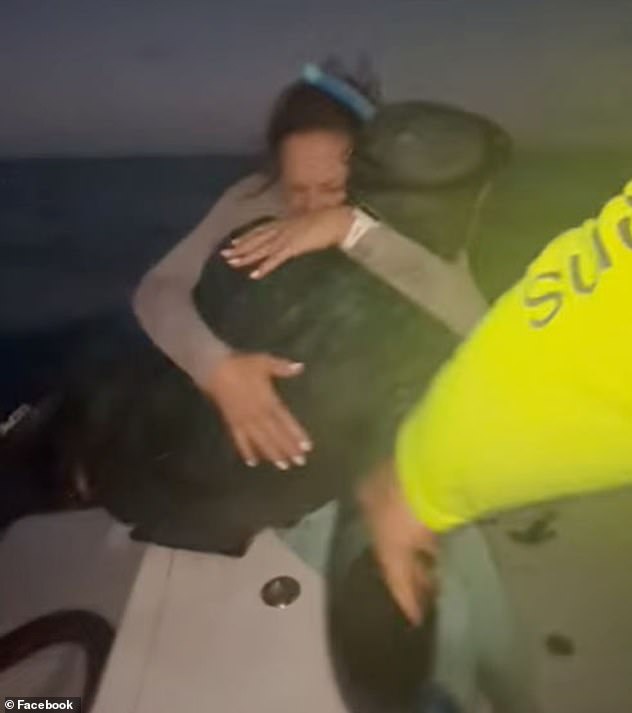 When asked what it was like the moment Tabitha and other family members pulled him to safety on the boat and was greeted with a warm hug from his mom, Gartenmayer answered: ‘The greatest forever.’

Also a spear-fisher, she recounted the horror she felt upon receiving the fateful call that notified her that he was missing, spurring her and other family members to take their own boat out into the Florida surf as darkness descended.

It was thanks to their bravery and quick-thinking, Gartenmayer said – and not the Coast Guard officials and helicopters called to aid in the search – that he was eventually saved.

‘The worst call I got in my life,’ Tabitha Gartenmayer said of the moment she learned her son was lost. ‘I worry every time he goes out because he pushes the limit sometimes,’ she added, her face riddled with concern. ‘Sometimes he night dives and goes down 100 feet. So just that scares you.’

She said that she got the call from Gartenmayer’s dad, her ex-husband, after their son had already been missing an hour.

‘The way he sounded it literally took my breath away. I couldn’t even breathe,’ the mom said. ‘Like everything just went away. I was just, like, standing there stuck.

‘You replay that every time you get that feeling. So I passed the phone to my friend and she literally – I couldn’t talk. I was just, like, was stuck.’ 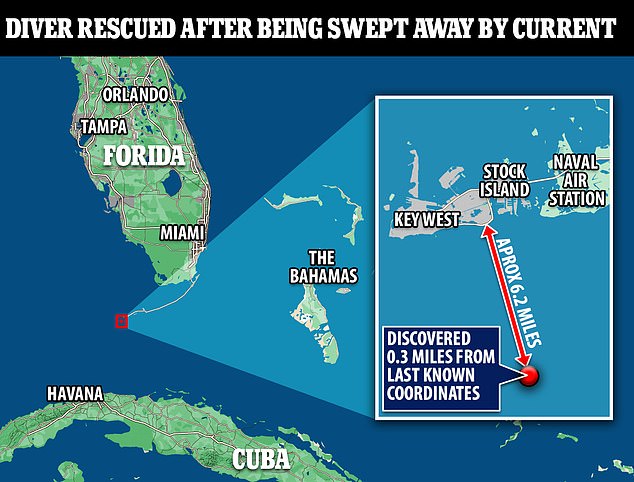 She added that until that point, she had been unaware that her son ‘was floating around the ocean for hours by himself.’

Incensed about being kept in the dark and desperate to find her child, she and other family members traveled to her father’s house, where the diver’s grandfather, also a fisherman, already had a boat prepared.

‘They are already on the boat. Literally took the family to come together within seconds,’ Tabitha said proudly. ‘That’s our baby. That’s our baby. And that’s what do you. That’s how we are. We are always going to be there to protect our family.’

As Gartenmayer was still treading water, the group boarded the boat and traveled 58 miles ‘non-stop’ for more than an hour.

Soon enough, they honed in on Gartenmayer’s location, with the lost diver saying he quickly recognized the hum of his grandfather’s boat, before being graced with the glorious sight of its bow. 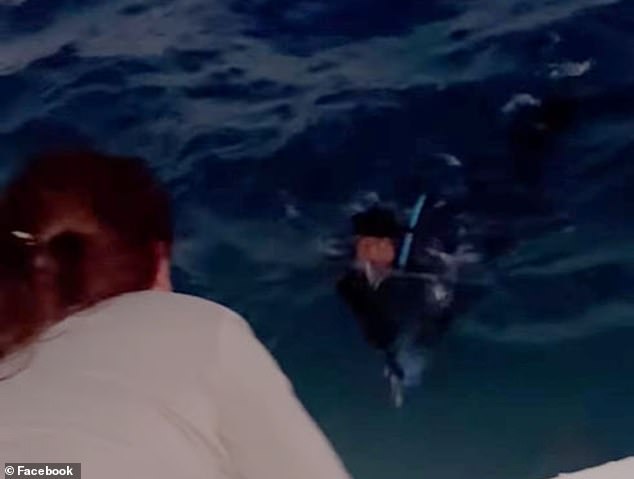 ‘Yeah, growing up, seeing that console and I could could hear the hum of the motors, oh, that’s my grandpa’s boat,’ the diver said.

‘It’s a miracle,’ his mom went on to add, tearing up at several points during the emotional sit down. ‘I wanted to jump in and get him.’

‘Yeah, I’m still, like, this is definitely a miracle,’ a sheepish Gartenmayer agreed.

When asked what it was like the moment Tabitha and other family members pulled him to safety on the boat and was greeted with a warm hug from his mom, Gartenmayer answered: ‘The greatest forever.’ 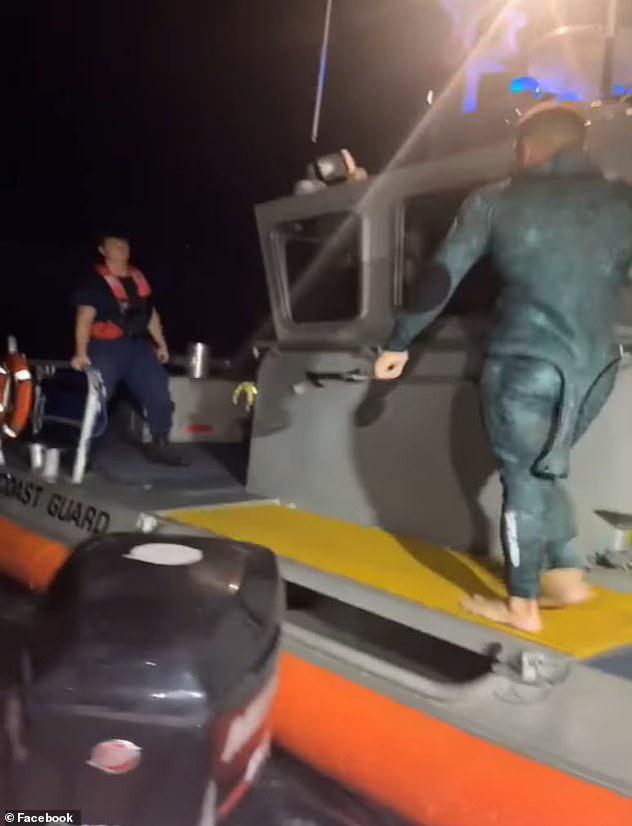 It was thanks to his mom and other family member’s quick-thinking, Gartenmayer said – not the litany of Coast Guard officials or helicopters called to aid in the search – that he was eventually saved.

That said, even with the close call, the diver said he will continue to do what he loves and will not be deterred by the incident.

His mother, however, was more skeptical, but ultimately supported her son’s choice.

‘He is grown man. It’s his passion. This is what he loves to do,’ Tabitha said, saying she was just happy to be reunited with her son.

‘As long as he is doing what he loves to do but he is safer and goes with people that will make sure he is close to the boat and watch him, you know, because that’s very important. You go with experienced divers. You know, that’s a big deal for me. And that is big deal.’

‘I was spearfishing with him in my belly,’ she added. ‘I know he was born to do this.’