Mr Juncker, the European Commission’s president and the EU’s most senior official, is set to leave office at the end of October after five years at the helm. In 2014, the former Luxembourg prime minister was handed the top job using the so-called Spitzenkandidat, where the nominee of the largest group in the EU Parliament is appointed. But at an informal EU27 leaders summit in Sibiu, Romania, deep divides emerged over the “lead candidate process” as they pondered the bloc’s future.

The current favourite to succeed Mr Juncker is German MEP Manfred Weber, a fellow member of the European People’s Party.

But Brussels insiders have all but conceded that it is impossible that the German, a close ally of Angela Merkel, will ever come close to taking the top job.

Mr Weber doesn’t possess the normal credentials of a European Commission president – a former prime minister or a French speaker.

French President Emmanuel Macron, Austrian Chancellor Sebastian Kurz, Luxembourg’s prime minister Xavier Bettel and Lithuanian Dalia Grybauskaite have all spoken out against the use of the Spitzenkandidat process. 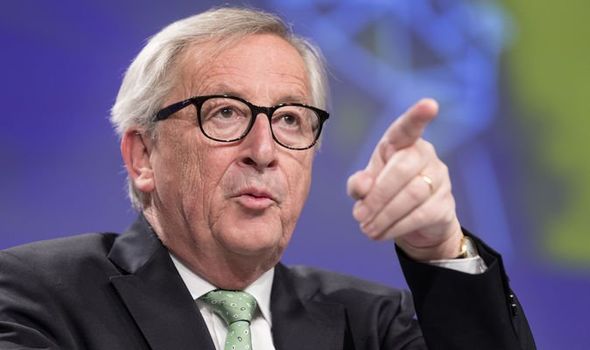 Mr Macron said he has “a lot of respect” for Mr Weber but that “I do not see myself as in any way bound by the principle of Spitzenkandidat”.

Mr Kurz said: “It will be difficult to tell voters that there will be elections and a Spitzenkandidat and then leaders say: let the people vote, we will decide in a small circle among ourselves.

“I do not see this is democratic. If Manfred wins the election, then he can claim the Commission presidency.”

Mr Weber has hit back at Spitzenkandidat critics, insisting his opponents must explain “what was wrong” with telling voters who would be the candidate for the Commission.

It is understood that he has worked his way to the bookmakers’ favourite to ensure there is a German EPP candidate when formal discussions to decide on the role in July.

Mrs Merkel is said to favour Germany steering the direction of the Commission during the EU’s next five-year cycle.

Brussels faced a similar dilemma in 2004, when Guy Verhofstadt emerged as a presidential candidate as part of a Franco-German stitch-up to control the Commission.

Mr Verhofstadt, who is now the EU Parliament’s Brexit co-ordinator, spent a lengthy time in the spotlight as the internal workings of a more secret candidate was worked on.

It is expected that a similar jostle will take place between the EU’s current crop of leaders at a special post-election summit on May 28 and June’s European Council gathering in Brussels.

With the EPP likely to remain in control of the Commission, it’s current frontrunners Mr Weber and EU Brexit negotiator Michel Barnier are unlikely to be given much airtime during the talks.

Critics argue that Mr Barnier represents the old EU and his ties with Mr Macron are too close after the Brexit negotiator broke ranks with the Commission to only back a short delay to Britain’s divorce in April.

Instead an entirely unexpected candidate will likely emerge from the EPP’s ranks, and most likely a current serving leader.

Irish prime minister Leo Varadkar, also an EPP member, is one of the names on the lips, a well-respected member of the European Council and is on unsteady ground domestically with his minority government in Dublin.

The fresh-faced leader, who played a pivotal role in maintaining EU unity during the Brexit negotiations, would likely win the backing of his colleagues if he was convinced to throw his name in the hat.

And even Mr Varadkar’s colleagues can’t convince him to stand, EU leaders would be happy for the next Commission president to follow a similar mould.