England flags fly over Britain's 'most patriotic street' before match

Is this England’s most patriotic estate? Three Lions flags flutter around estate as football fans prepare for Three Lions’ first-round World Cup match (and millions more are set to WFH… ‘watch from home’)

England flags are fluttering in the air over Britain’s ‘most patriotic street’ as millions across the country get set to watch the Three Lions kick of their World Cup campaign against Iran tomorrow.

Residents on the Kirby estate in Bermondsey, London, show their pride during every major tournament by putting  their St George’s flags outside their homes.

Tomorrow people living in the area will join millions others as they watch the team, managed by Gareth Southgate, begin their quest for World Cup glory in Qatar.

The match, which will kick off at 1pm, is set to see millions tune in, despite it taking place in the middle of the working day.

In Bermondsey Chris Dowse, who organises the impressive flag display on the estate, said he was optimistic about England’s chances, telling MyLondon that as usual, he thinks ‘it’s coming home’.

He told the outlet that residents usually pay £4 each for small custom flags and £15 for larger ones, but the price has gone up from £60 for the whole estate in 2018 to £350 this year. The cost also covers the cost of buying separate flags for residents who support other teams.

Earlier this year the estate cheered on the England Women’s team outdoors as they charged to victory at the European Championships, but they will have to stay inside in the winter weather for this tournament.

Mr Dowse told the publication that controversy over Qatar’s human rights record and the weather which could see temperatures of more than 30C in the Middle Eastern country should have been predicted.

‘They knew this was going to happen when they named Qatar,’ he said. 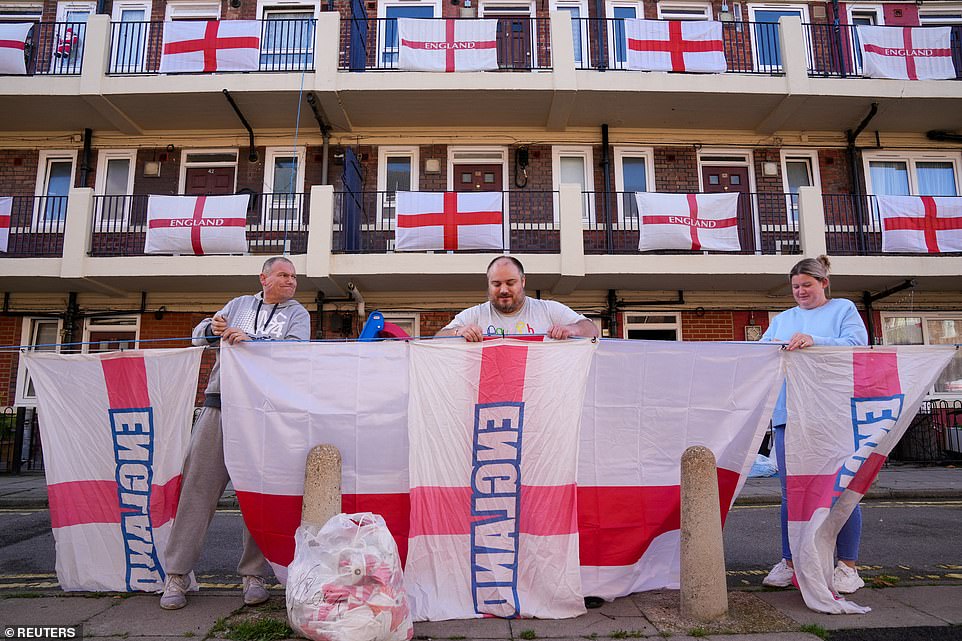 England fans prepare at the Kirby Estate in Bermondsey, London, as they put up flags to show their support for the Three Lions ahead of the World Cup 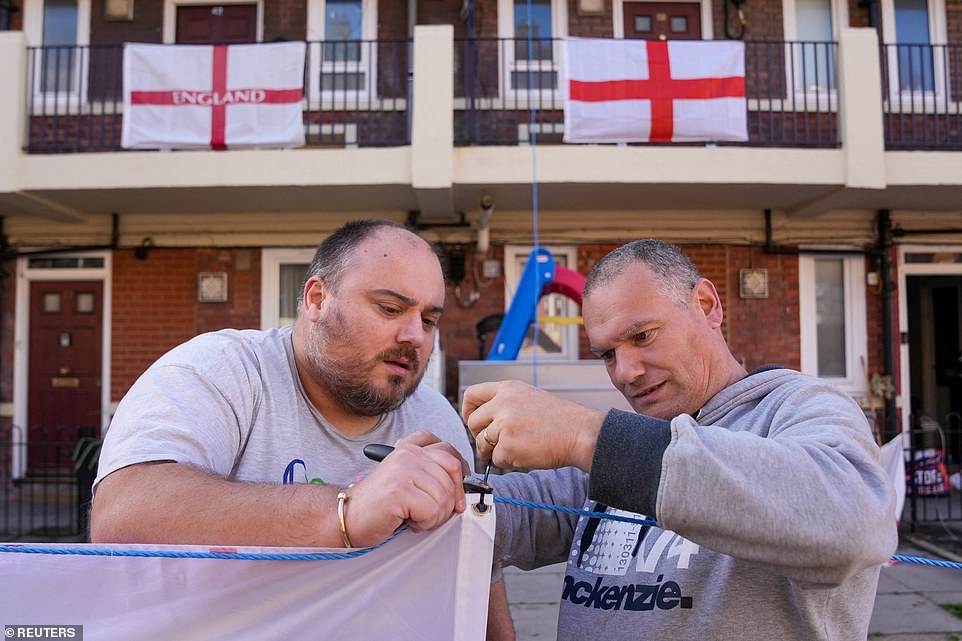 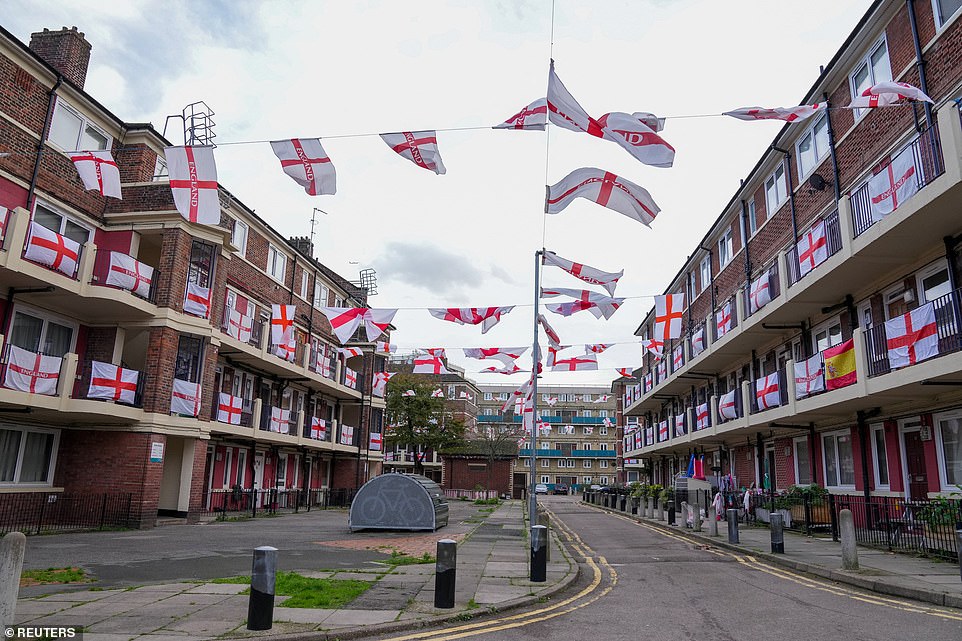 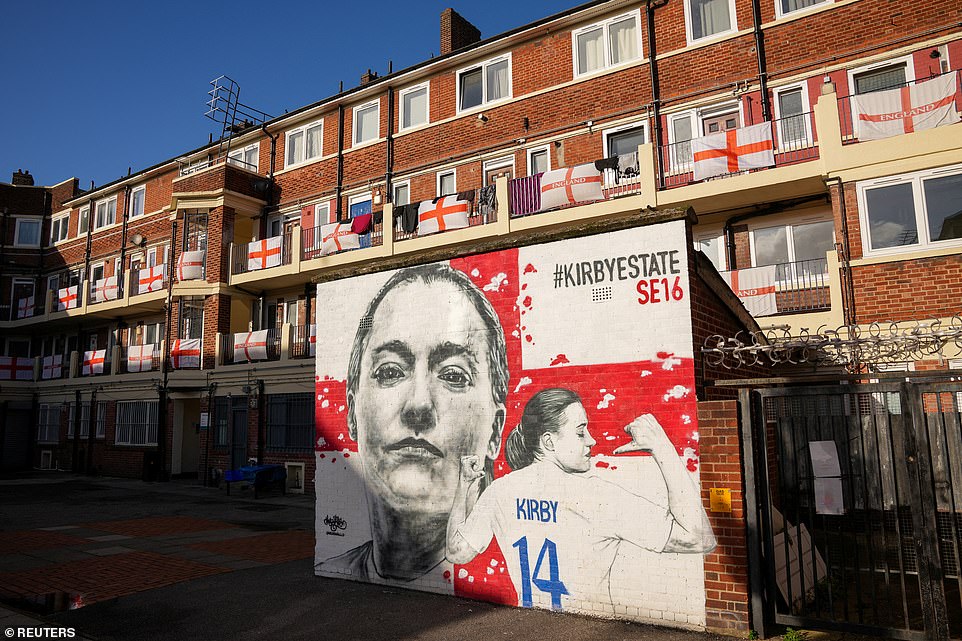 A mural of England Women’s footballer Fran Kirby on the Kirby estate in Bermondsey, London, with flags of St George in the background 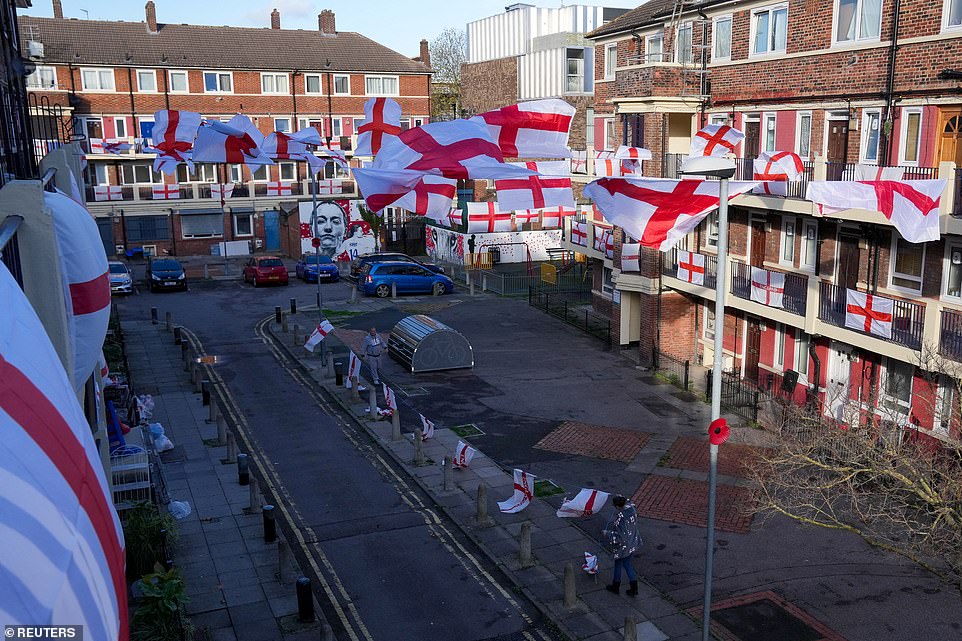 Residents on the estate usually pay £4 for custom flags and £15 for larger ones, but the price has gone up this year

Gareth Southgate told the media earlier this week he wants to bring World Cup joy to the nation at a challenging time by leading England on another ‘memorable’ journey.

Having reached the semi-finals in Russia four years ago and finished as Euro 2020 runners-up, the Three Lions are among the favourites to triumph this winter in Qatar.

But the heat is on Southgate after England were relegated from the Nations League top tier during a six-match winless run they will hope to end in Monday’s Group B opener against Iran.

Clashes against the United States and Wales quickly follow as his players look to join Sir Alf Ramsey’s 1966 heroes as the only Englishmen to have ever won a major international trophy.

‘Look, our challenge is to give our supporters a tournament that’s memorable,’ Southgate said on the eve of the Iran game at the Khalifa International Stadium.

‘We’ve taken them on fantastic journeys in our last two tournaments, and we want to bring (them on another).

‘Our country is going also through a difficult spell – not the same as some of the other countries around the world at the moment but we’re in the middle of an economic recession and life has been difficult for a lot of our people.

‘So, we want them to enjoy their football and have a journey with the team that brings some real happiness.’

There has been precious little time to prepare for the tournament given the unprecedented scheduling of the tournament, which is wedged in the middle of the Premier League season.

England met up on Monday and jetted out to Qatar the following day, with James Maddison the only player ruled out against Iran as he recovers from a knee issue.

‘Everybody is available bar James Maddison for tomorrow,’ Southgate said. ‘It’s a little bit early for Kyle Walker but he is training with the team, so that’s ahead of where we thought he might be at this stage. Very positive.

‘We’re looking forward to this challenge and I’ve really liked the way the players have approached training this week.

‘It’s been a good transition for us because training a couple of days earlier (in the day) with the heat, which we wanted to adapt to.

‘Now we’ve had a couple of lighter sessions later at night. It’s quite cool now, so we feel that that’s been good physical tapering for the game.’ 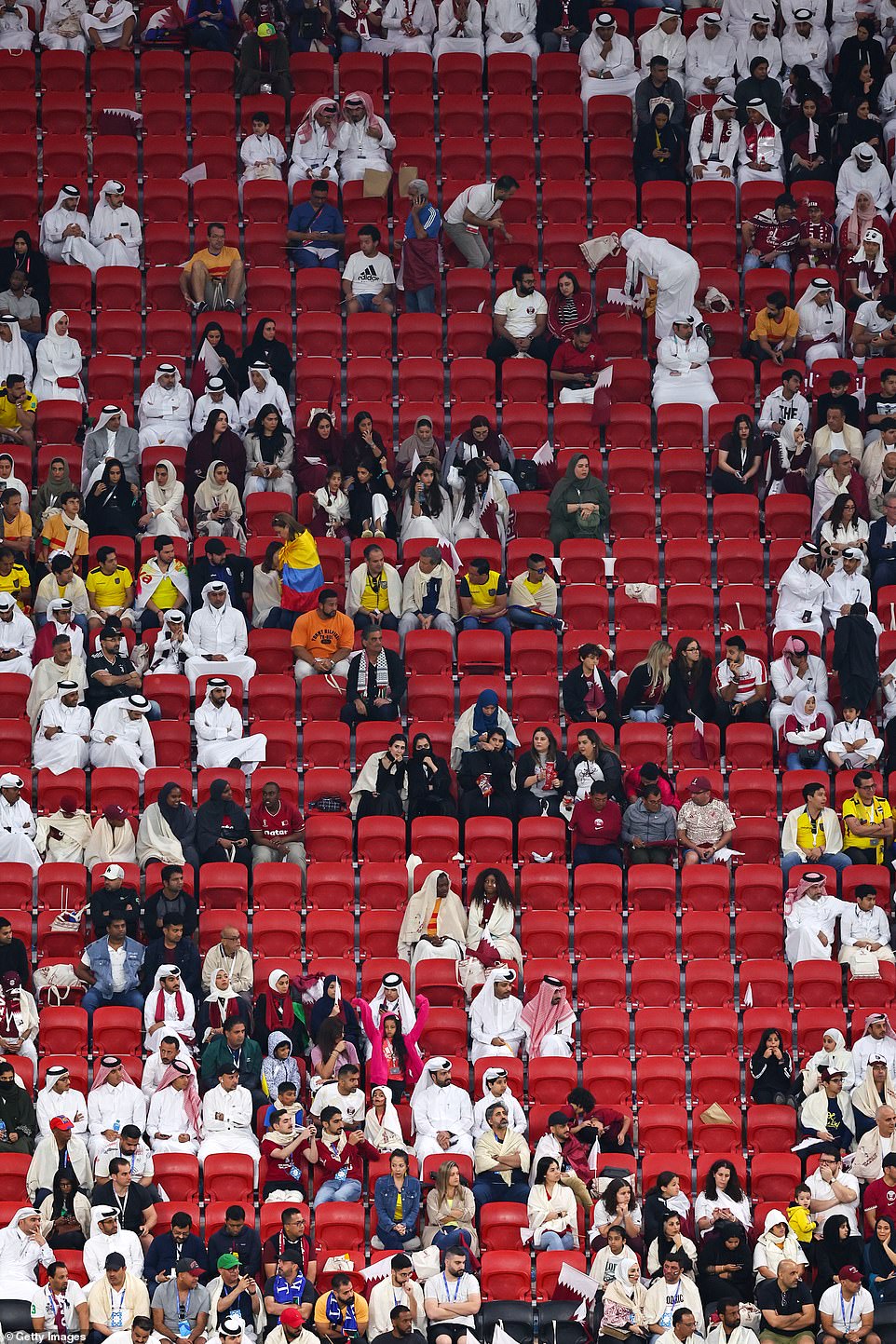 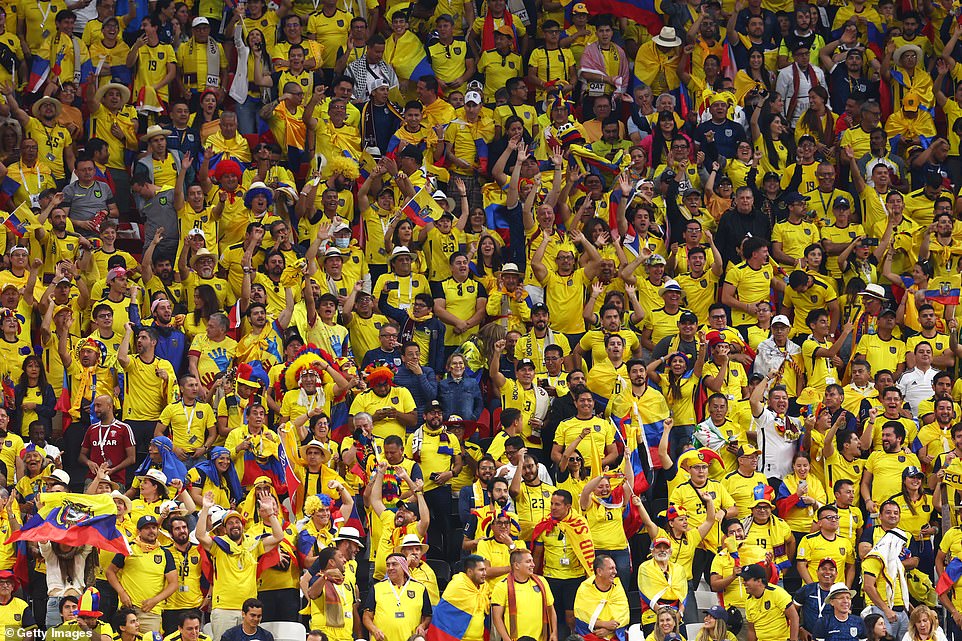 England have been training at Al Wakrah Sports Complex, where players have been peppered with questions during media access over Qatar’s treatment of migrant workers and LGBTQ+ people.

Iran’s players and staff have also faced questions about politics given the deaths and arrests in the struggle for gender equality in their homeland.

A reporter, seemingly irked by such questions, responded by mentioning the wars in Iraq and Afghanistan in a lengthy question to Southgate that led the moderator to request journalists are more succinct.

‘I understand the frustration from your team regarding the questions,’ Southgate said.

‘And, believe me, I’ve been asked lots and lots of political questions by our media about lots of subjects for six years, so we’re both in the same situation on that.

‘I understand in the position I’m in that there is a responsibility for me to answer some of those questions.

‘We’re very respectful of our opponents tomorrow. We know the quality of the players – several of them playing at big European clubs, obviously a couple have been playing in England.

‘And we know Carlos (Queiroz), in the last World Cup they were a very well-organised team, very difficult to play against, against big opponents.

‘We have to be the very best version of ourselves to win the game.’