What a doughnut! Driver caught on video spinning his car the wrong way around roundabout is banned from roads for 15 months

A ‘reckless’ driver who was filmed performing doughnuts and going the wrong way on a roundabout has been banned from driving.

Daniel Bassett, 26, was caught on camera racing his Lexus at high speed around a Swindon roundabout on May 7.

Footage shows his car skidding around the deserted North Star Avenue roundabout chucking out smoke from its tyres.

Shocked passers-by can be seen staring at the car, while the person filming mutters that the driver is going to ruin the tyres.

Appearing at Swindon Magistrates Court yesterday, Bassett pleaded guilty to dangerous driving after police called his actions a ‘danger to the public’.

Bassett was banned from driving for 15 months, will have to take an extended driving test and must carry out 200 hours of unpaid community service work thanks to the stunt.

The force added that he must also take an extended driving test before his disqualification is lifted, and pay £85 court costs and a £95 surcharge. 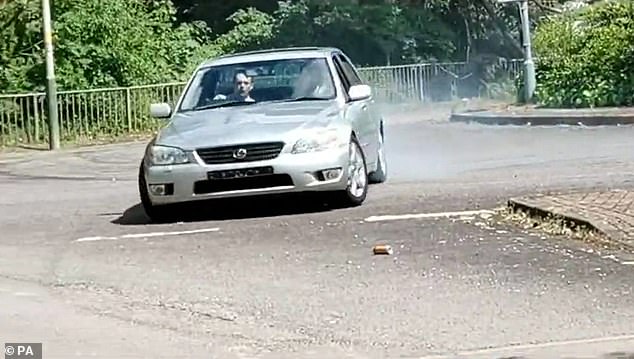 Daniel Bassett, 26, was caught on camera racing his Lexus at high speed around North Star Avenue roundabout in Swindon on May 7

Speaking after the sentence Wiltshire Police Assistant Chief Constable Deb Smith said: ‘We welcome the sentence handed down to Bassett, his actions represented severely reckless behaviour and clear danger to those present and the wider public.

‘Op Staysail remains focused on relentlessly pursuing those who are responsible for creating extremely dangerous situations on our roads whilst participating in disruptive car meets, we will continue to seek the strongest possible sanctions in such cases.’