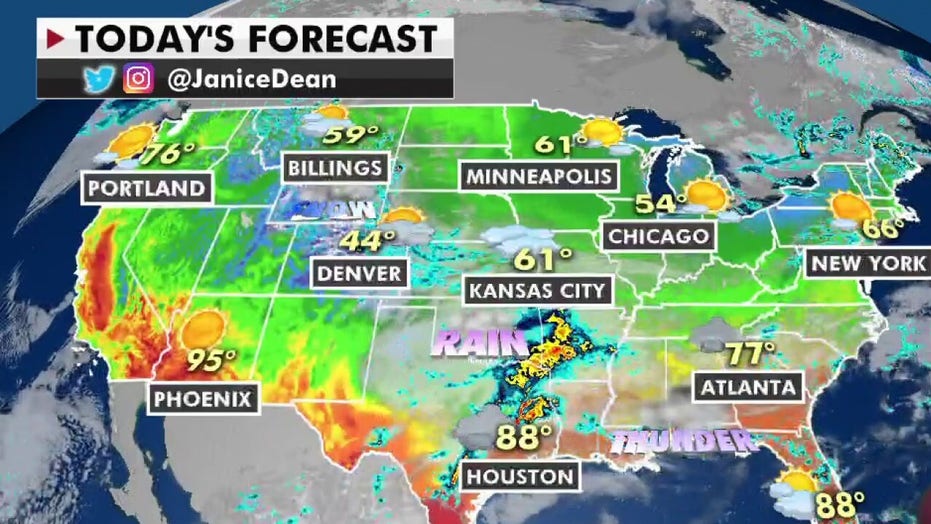 National weather forecast for Tuesday, May 11

Janice Dean has your FoxCast.

Dangerous flash flooding drenched the streets of metro New Orleans on Monday, impeding vehicular movement and knocking out power for thousands of residents.

Threatening conditions continued into Tuesday as storms meandered across the region.

NATIONAL WEATHER FORECAST: GULF COAST TO GET DRENCHED THIS WEEK

“A significant line of showers and thunderstorms is moving into metro NOLA. A flash flood warning is in effect for parts of the Westbank and additional warnings are possible, the National Weather Service New Orleans area tweeted Tuesday. “Please use extreme caution on area roadways!”

The agency’s Weather Prediction Center said that a frontal boundary across the Gulf Coast states interacting with “moist inflow” from the Gulf of Mexico would create showers and thunderstorms, leading to the potential for scattered flash floods, a flash flood watch and a slight risk of excessive rainfall into Wednesday.

NOLA.com reported that forecasters said up to 6 inches of rain fell in some areas on Monday and videos and photos on social media showed trash and even an alligator moving through floodwaters.

Jefferson Parish posted an update from Entergy Louisiana to Twitter, saying around 4,000 customers had lost power due to high winds and lightning.

“Due to high winds and lightning, we recently lost a feeder affecting approximately 4,000 customers just east of the airport to a section at the Saints Practice facility. Crews are investigating and working to restore power ASAP,” the government account shared.

The Entergy Louisiana outage map reportedly showed more than 7,900 without power in Kenner.

Kenner set a new record for May 10, with 4.1 inches of rainfall — nearly 2 inches higher than the previous highest total for that date.