Covid could become a ‘much more treatable disease’ in the next six months, NHS chief Simon Stevens says as he warns HALF of patients in intensive care are under 65 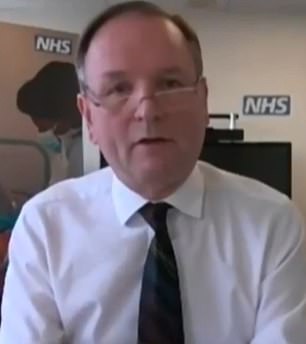 Coronavirus could become a ‘much more treatable disease’ over the next six to 18 months, NHS England boss Sir Simon Stevens said today

Coronavirus could become a ‘much more treatable disease’ over the next six to 18 months, NHS England’s chief claimed today.

Sir Simon Stevens said the UK vaccination programme was ‘on track’ to immunise the most vulnerable Britons with both doses by spring.

This, combined with the advent of new treatments, will ease pressure on the health service and pave the way for a ‘much more normal future’, he claimed.

Sir Simon made the encouraging comments during a virtual House of Commons Health Select Committee today.

He told MPs he expects Covid and flu vaccines will be combined into a single jab as soon as this winter, if not next, as the country learns to live with the new virus.

But he warned the NHS was still in for a few more weeks of turmoil, with Covid patients taking up three-quarters of all ICU beds and a third of all general beds, causing massive disruption to vital non-Covid care, including cancer treatment.

He also revealed that ‘about a quarter of hospital admissions for Covid are for people aged under 55’ and about half of all ICU patients were under 65.

Sir Simon said Covid deaths were ‘highly concentrated’ in the older age groups, including those aged 70 and above, the clinically extremely vulnerable, and the health and social care staff looking after them.

‘But when you look at the use of hospital resources, it’s not quite as concentrated at the apex of the pyramid of risk.

‘By the time you are vaccinating people, 65, 70, 75, you’re beginning to make a big impact on the hospital bed usage, not just the avoidable deaths.’ 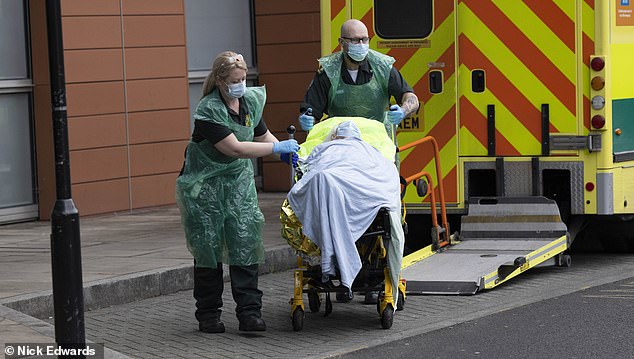 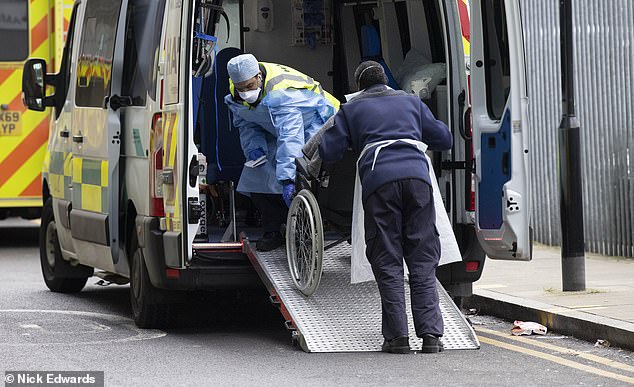 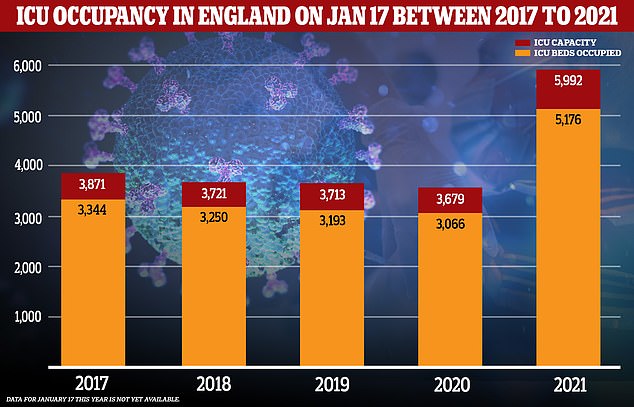 Sir Simon, laying out the road map this year, told MPs: ‘The first half of the year, vaccination is going to be crucial,’ he said.

‘I think a lot of us in the health service are increasingly hopeful that the second half of the year and beyond we will also see more therapeutics and more treatments for coronavirus.’

‘And I think it is possible that over the course of the next six to 18 months, coronavirus becomes a much more treatable disease with antivirals and other therapies, which alongside the vaccination programme holds out the hope of a return to a much more normal future.’

NHS England boss Sir Simon Stevens said today he was ‘most concerned about cancer surgery’ as the NHS is forced to cancel operations to focus on the winter wave of Covid admissions.

He told the House of Commons Health Select Committee: ‘There is huge focus across the health service to make sure those services are sustained.’

It comes as leaked data showed there were 800 fewer cancer surgeries in the first two weeks of the year than are normally carried out, according to the Health Service Journal.

The bulk of the delayed operations were in London, Essex, Bedfordshire, and Surrey, which have bore the brunt of the second wave and have been battling the highly infectious Kent variant.

There is growing concern that pauses in cancer treatment throughout the pandemic have left many patients with a shortened life expectancy. Charities predict up to 35,000 extra deaths this year may be caused by cancer as a result.

The ‘weekly activity returns’ data showed that from November 1 to December 20, London performed a weekly average of 410 cancer surgeries.

Activity in Essex, Hertfordshire, Bedfordshire and Milton Keynes was down 34 per cent, the equivalent of about 155 operations.

In Sussex and Surrey it was 28 per cent lower than expected, more than 100 operations, and in Cambridgeshire and Norfolk the figure was down 23 per cent, equating to about 120 operations.

He added that, as the country learns to live with the virus, ‘it would be great if the Covid vaccine and flu vaccine ends up being combined into a single vaccine, which we might see if not this winter but future winters as well’.

Sir Simon also told the Committee that Covid vaccines were being used as fast as they arrived in the NHS, and more than half of those aged 75-79 have now had their first vaccine doses.

‘We are at the moment pretty much using up each week’s vaccine as we get it, as we receive it through the safety testing, the batch testing, distribution to the NHS, then it gets sent out across the country,’ he said.

Asked about vaccine priority, he said teachers, police and people with learning disabilities will need to be considered for the next round of Covid-19 vaccinations, and suggested that this should perhaps happen as early as February.

‘Our current proposition that once we have offered a vaccination to everyone aged 70 and above, and the clinically extremely vulnerable, then the next group of people would be people in their 60s and 50s.

‘But there will also be a legitimate discussion in my view that the Joint Committee on Vaccination and Immunisation will have to advise on as to whether or not there are certain other groups who should receive that priority.

‘People with learning disabilities and autism, certain key public service workers, teachers, the police, they will have to be factored in that post-February 15 prioritisation decision.’

Sir Simon said reducing the number of hospital beds occupied by Covid-19 patients was not ‘the only consideration’ policymakers would take into account when deciding the vaccination priority list.

Vaccinating everyone aged 65 and over will have a ‘big impact’ on the pressure on hospital beds, Sir Simon said, but added that about a quarter of hospital admissions for Covid are for people aged under 55, and about half of inpatient critical care bed days for coronavirus relate to patients under the age of 65.

Earlier, Sir Simon said there will come a point where people are told they can come forward for a vaccination if they have not yet received one.

‘As we move through each successive cohort there will come a moment when we will say: ‘If you haven’t been contacted then please come forward yourselves.’

‘Right now, because we have been asked to move down the risk pyramid, the NHS is asking people to book an appointment, so we’re saying: ‘Wait for us to contact you’, rather than: ‘You phone your surgery’, for example.

‘But as we get to the end of each cohort we will then be saying very clearly: ‘If you fall into this category and you haven’t been vaccinated, here’s how you can come forward and be vaccinated.”

Asked about the impact on cancer treatment due to an NHS under pressure, Sir Simon said he was ‘concerned’ about cancer surgery.

He said there was a ‘huge focus’ to ensure that services for those requiring urgent cancer surgery were sustained.

He added: ‘There’s particular pressure on anaesthetists at the moment, many of whom are being diverted to help the critical care surge for coronavirus patients.’

Sir Simon said just under 33,000 Covid patients are currently in hospitals across the country, which was ‘very, very serious’.