Covid could spread through rats but risk is 'very low', SAGE file says

Covid could spread among RATS because they can catch the virus from people, SAGE paper says – but risk of transmission back to humans is ‘very low’ and limited to people who work near them

Coronavirus could be transmitted by rats but the risk to most people is ‘very low’ unless they work near the animals, experts say.

In a scientific paper published today by government advisers on SAGE, researchers said rodents can catch the virus from people and this is more likely with newer variants such as the Kent and South African strains, which are more transmissible.

Researchers at the Department for Environment, Food and Rural Affairs (DEFRA), said rats could then pass Covid between themselves and cause ‘sustained population level transmission’ among the animals.

It was not clear, however, how easily it could be passed the other way, from a rat or mouse to a person.

Rodent-to-human transmission, they said, was only likely for people in close contact with wild rodents, and still low for them.

The paper said: ‘The level of contact between humans and rats which could potentially lead to new cases is very low for the general population and restricted mainly to occupational exposure.’

Covid is known to be able to affect various mammals and a paper published by the University of Glasgow today confirmed cats can catch the virus from their owners. 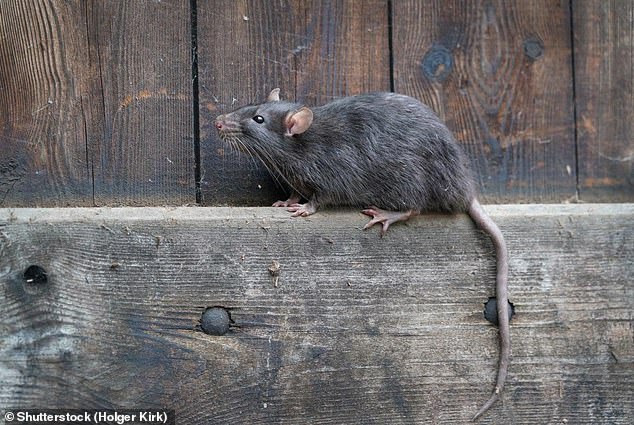 The DEFRA study, published as part of a document dump by SAGE, was dated April 7 2021.

It found that a mutation common on new variants of the virus – named N501Y, and known to speed up transmission – could make the coronavirus more likely to infect rodents.

Rats and mice could catch the virus if it made it into human sewage, for example, or into rubbish that was thrown in the bin.

They said that because there is so much rubbish and sewage produced and so many rats in the UK, the likelihood of this happening was probably high.

And the paper added: ‘The level of close contact between rodents combined with their high population densities means the potential to transmit infection to other rodents is also high and therefore the likelihood that this would lead to sustained population level transmission and persistence would also be high.’

But it said people don’t generally come into close enough contact with rats or mice to catch the virus from them, although it might be possible scientifically.

KITTEN PUT DOWN AFTER CATCHING COVID FROM OWNER

A kitten had to be put down after catching Covid from its owner during the UK’s first wave, scientists have revealed.

The cat was a four-month-old Ragdoll that got taken to the vet in April 2020 because it was struggling to breathe.

Its condition got worse in the following days and the kitten had to be put down, with post-mortem tests revealing it had lung damage from viral pneumonia and signs of infection with coronavirus, which causes the condition.

The owner suffered from Covid symptoms the month before but couldn’t get tested, and scientists concluded they had passed the virus to their pet.

A second case, both of them reported by experts at the University of Glasgow, saw a six-year-old Siamese cat also contract the illness from its owner in May but then go on to recover.

The scientists said there is no evidence that pets can spread the virus to humans but the connection needs investigating so it doesn’t trigger future outbreaks.

In South Korea officials have even developed a testing and quarantine system for pets that develop symptoms of the virus.

Animals are known to be susceptible to the virus – it is believed to have emerged in bats and other small mammals, and caused outbreaks on Danish mink farms – but it’s unclear how sick it makes them.

For people to transmit the virus to one another they are generally thought to have to be within 1.5m to 2m of each other for a period of minutes, or to have physical contact or touch the same surface in relatively quick succession.

The only people likely to have this level of contact with rodents, the DEFRA paper suggested, were people who worked near them.

Specific jobs weren’t named in the paper but this could include people who work with sewage or water supplies, bin collectors or landfill workers, or people working in pest control.

‘The potential for this to lead to an outbreak where human to human transmission occurs will depend on the immune status of the population, the vaccine efficacy and level of circulating variants,’ the paper said.

It explained that the risk of transmission either to or from rats fell when there were fewer cases in the human population.

And it said the odds of a new variant emerging in a rodent and then being passed to a human were ‘very low, and certainly lower than in the human population.’

The finding about rats is not surprising because studies have found various kinds of similar animals can get infected with Covid.

Cases of the coronavirus have been found in dogs, hamsters, mink and ferrets, and there have been confirmed cases in cats in at least 15 countries during the pandemic, including the UK, US, France, Spain and Germany.

A study published today by the University of Glasgow confirmed two cases of human-to-cat transmission of the virus in Britain’s first wave last year.

One, a four-month-old kitten, had to be put down after catching Covid from its owner in April 2020.

It had struggled to breathe and then, when its condition got worse in the following days, the kitten had to be put down. Post-mortem tests showed it had lung damage from viral pneumonia and signs of infection with coronavirus, which causes the condition.

The owner suffered from Covid symptoms the month before but couldn’t get tested, and scientists concluded they had passed the virus to their pet.

A second case saw a six-year-old Siamese cat also contract the illness from its owner in May but then go on to recover.