A decision about Preston Market's future will be fast-tracked to help stimulate Victoria's struggling economy but Darebin Council fears that moving too quickly could undermine the review process.

The site in Melbourne's northern suburbs has been earmarked for redevelopment, with plans to add apartment buildings that could see the market moved within the block. Private owners Preston Market Developments has committed to the market's future. 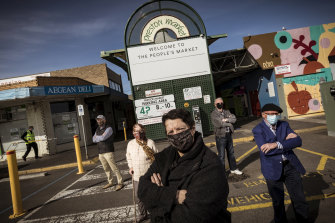 Maria Poletti, centre, president of the Darebin Appropriate Development Association, says any development should be sensitive to the market.Credit:Chris Hopkins

Last month, the Victorian Planning Authority said it would accelerate its planning control review of the market precinct along with 18 other projects.

The decision has put Darebin Council offside, with mayor Susan Rennie saying it has raised concerns for the market's future.

“Council was not formally consulted or informed of this decision and we have written to the VPA asking for an explanation and the full details of the process to be released,” Cr Rennie said.

“We believe a fast-tracked process could compromise on what’s important to protect at the Preston Market precinct … This site is the heart of Preston and deserves a considered and consultative process. Fast tracking will not deliver that.”

VPA chief executive Stuart Mosely said the council and community will have the opportunity to make submissions to an independent panel down the track.

As part of Victoria's economic recovery plan out of the pandemic, the authority was asked to identify projects for fast-tracking that were close to “shovel ready” and had a high economic value.

The draft structure plan will be presented to Darebin Council after the local government elections in October.

Preston Market Developments, jointly owned by Salta Properties and Medich Corporation, has committed to the market continuing “for decades to come”. 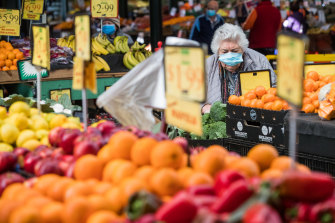 “We've seen some questions and concerns about the market closing – please know that there is no intention to close the market and while the footprint of the market will change there's no plans to move the market away from its current site,” the market's owners wrote on Facebook in June.

“[Preston Market Development] is committed to preserving the unique traditional market culture and continues to work with the Victorian Planning Authority to ensure the 50-year milestone not only celebrates the past but acknowledges the ongoing popularity and future success of the market.”

Preston Market – which celebrated its 50th anniversary in August – shares a site with a Centrelink office and Aldi supermarket, and is bordered by Murray Road, Cramer Street, High Street and St Georges Road.

A report by Architectus for the VPA, in consultation with the council and owners Salta Properties in 2018, said the market had "inactive" frontages, no identifiable entrance and poor pedestrian and cycle access.

RBA Architects found the market has local heritage significance to Darebin and councillors have asked for it to be permanently protected.

Ten per cent of the precinct should be open public space, council says, and 20 per cent of new residential buildings should be affordable housing.

In March MGS Architects proposed development principles and options for Darebin Council, suggesting staggered heights of up to 10 to 14 storeys.

Councillor Gaetano Greco argues that the market should stay where it is, saying its character would be at risk if it were moved.

“You won't be able to transpose those characteristics, that spirit, into a new market building,” Cr Greco said.

The Darebin Appropriate Development Association also believes the market should stay where it is, president Maria Poletti said.

She said the association was not against the rest of the site being developed but that it should be sensitive to the market.

“We want to keep the development at Preston Market to what we think would be reasonable heights, and in a way that advances the market rather than detracts or takes away from it,” Ms Poletti said.

A spokeswoman for Preston Market Developments welcomed the news that the review for the urban renewal project would be fast-tracked.

Get our Morning & Evening Edition newsletters

The most important news, analysis and insights delivered to your inbox at the start and end of each day. Sign up here.