London: British Prime Minister Boris Johnson has raised the prospect of expanding the new security alliance between Australia and the United States in a lengthy phone call with newly sworn-in leader Anthony Albanese.

The pair spoke for the first time on Tuesday while Albanese was flying to Tokyo for a meeting of the Quad dialogue, where he will meet US President Joe Biden on Wednesday. 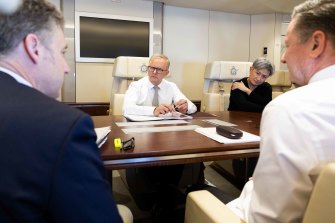 Albanese and Wong talking with senior members of DFAT and the Office of National Intelligence on his way to Tokyo.Credit:Alex Ellinghausen

Albanese was said to have reiterated Labor’s strong support from the AUKUS pact, which had placed a major strain on diplomatic relations with France last year after Paris accused all three nations of conspiring behind its back to terminate Canberra’s $90 billion deal.

A Downing Street spokeswoman said Johnson told Albanese that he thought the trilateral grouping could go “further together in other domains”, where both countries could “collaborate for the global good”.

The three-way strategic defence alliance is to initially build a class of nuclear-propelled submarines, but also to work together in the Indo-Pacific region, where the rise of China is seen as an increasing threat, and develop wider technologies.

However, diplomatic sources have told The Sydney Morning Herald and The Age that the British government had been wary that an incoming Albanese government might be lukewarm towards the alliance, given its controversy and the previous government’s missteps, and had privately raised the idea of broadening the pact to include other areas such as energy security before the election result.

Johnson was said to have congratulated the new Australian Prime Minister leader “fulsomely” and said he looked forward to strengthening the relationship between the two nations “even further”.

One of the leading advocates for more action on climate change, Johnson had pushed former prime minister Scott Morrison hard before last year’s Glasgow climate summit to adopt a carbon-neutral target by 2050.

While Labor policies are more ambitious than the previous government, many environmentalists argue they do not go far enough. The party has pledged a 43 per cent reduction in greenhouse gas emissions by 2030 and net zero by 2050 — in contrast to the Liberals, who had only recently committed to net zero.

However, Albanese has so far refused to ban coal in power stations or to block new mines and courtesy of its parliamentary majority will not be pressured by a large climate-focused crossbench to go any further simply to hold on to power.

Johnson also thanked Australia for its “principled” position and strong support for Ukraine with the pair agreeing that it was important that the war did not embolden other countries to undermine global stability.

He told his counterpart it was an important moment for democracies to stand together and prove their worth, and it was important that coercive autocracies were sent a message of strength and unity.

The readout of the call said Albanese noted that the UK and Australia had a “strong and historic friendship”, stemming from their close Commonwealth ties and the pair agreed that there was more that could be done together across global security, climate change and trade.

The six-week Australian election campaign delayed the implementation of the trade agreement between the nations, struck late that year. The UK is hoping to use the deal as part of its accession to the 11-member trans-Pacific trade bloc.