Boris Johnson is facing a fresh social care battle in the Lords after seeing his Commons majority slashed by a Tory revolt.

The PM has been warned that peers will scrutinise his proposals watering down the cap on costs ‘very, very carefully’.

The government could endure another potentially even tougher showdown in the lower House if Lords ask them to ‘think again’.

Ministers were unable to say whether the change to the £86,000 cap on care costs honoured an election pledge to guarantee no-one would have to sell their home to pay for care.

And backbench Tory critics joined experts and Labour MPs in warning the move to count only individual payments towards the cap, and not local authority contributions, would cost poorer recipients more in assets than the wealthy.

The amendment squeezed past by 272 votes to 246, with the 26 margin far smaller than the PM’s working majority of around 80 MPs. 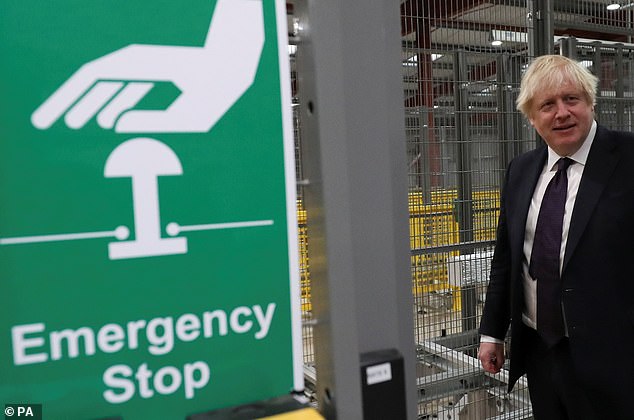 Boris Johnson (pictured in Northumberland yesterday) has been warned that peers will scrutinise his proposals watering down the cap on costs ‘very, very carefully’ 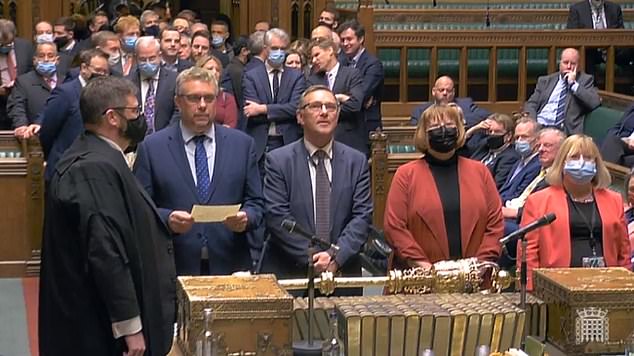 The Prime Minister narrowly pushed through his social care policy in the Commons last night (pictured), despite 19 Conservative MPs voting against and dozens more abstaining 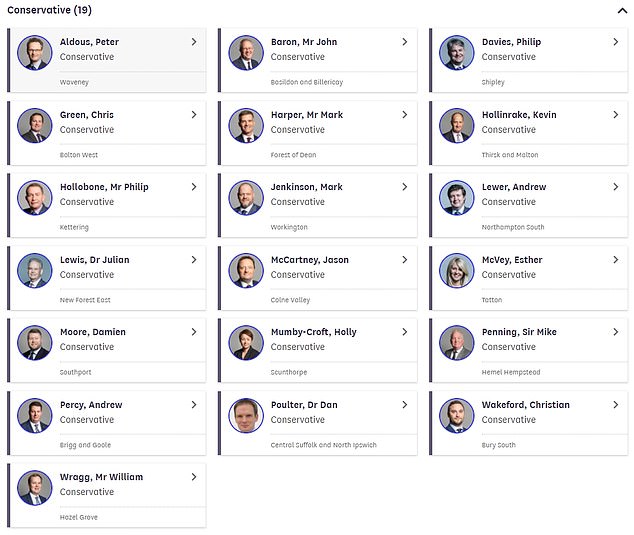 Former Cabinet minister Esther McVey and ex-chief whip Mark Harper rebelled to oppose the plans – while around 30 MPs appear to have ‘actively’ abstained.

Ex-health secretary Jeremy Hunt confirmed today that he was among those who avoided voting.

‘I was conflicted, I actually ended up abstaining because it is a big disappointment that they changed the way the cap is calculated,’ he told the BBC.

‘But it is, nonetheless, a step forward.’

Not including council support in calculating whether the cap on care costs has been reached means it ‘won’t protect the assets of as many people as we had hoped for’.

‘We should still remember that for the poorest people they will get more help, earlier, than they currently get.’

Baroness Finlay of Llandaff has said the House of Lords will scrutinise the Government’s social care reform ‘very, very carefully’.

The professor of palliative medicine, a crossbencher, told BBC Radio 4’s Today programme: ‘I think when this comes to the House of Lords, we will need to scrutinise this very, very carefully.

‘We will do what the Lords does well, which is go over every line, discuss everything in this and we will want to see the assessment, too, of the overall funding.

‘So, I don’t think there will be any quick response one way or another, but I think we will spend quite a bit of time scrutinising.

‘It may be that we will say to the Commons, ”can you think again?”, it may be that we come up with constructive amendments to improve what is on the table at the moment because, clearly, there’s a lot of disquiet.’

Senior Conservative William Wragg and NHS doctor Dan Poulter also voted against the change, as did Christian Wakeford and Mark Jenkinson, two MPs who seized former Labour strongholds in the north for the Tories.

Mr Johnson had defended the plans as ‘incredibly generous’ and ‘much better than the existing system’ during a speech at the annual CBI conference earlier in the day.

In September, the Government announced that a £86,000 cap on lifetime care costs will be put into place from October 2023.

However, a policy paper last week showed that only personal contributions will count towards that cap for people who receive financial support from a local authority for some of their care.

Experts said that means poorer individuals will reach the cap faster than those who are wealthier and will therefore see more of their assets eaten up by care costs.

The Resolution Foundation think tank warned that people in the North and in Yorkshire are most at risk from having their ‘wealth wiped out by care costs’, and said the changes approved on Monday would make the reforms worse.

Amid lingering anger on the Tory backbenchers over the handling of the Owen Paterson sleaze row, former chief whip Mark Harper said he would be among those opposing the amendment.

He warned it ‘potentially disadvantages the less well-off and those of working age with life-long conditions’.

Former justice secretary Robert Buckland urged ministers to ‘look again’ at the issue, and Bury South MP Mr Wakeford said he was uncomfortable with the change ‘to move the goalposts’.

‘Especially when one of the main messages for introducing this levy was ‘You won’t need to sell your house for care’, to get to a point where unfortunately you might need to and (it’s) arguably our least well-off in society, our least well-off voters – again, it’s not something I’m particularly comfortable with,’ he told Times Radio.

Labour’s analysis suggested the changes mean the average homeowner in two-thirds of northern areas will have to pay more towards their care, while a third in the Midlands will be worse off.

The Conservative Party manifesto for the 2019 general election said social care reforms must ‘guarantee that no-one needing care has to sell their home to pay for it’.

But the Prime Minister’s official spokesman was unable to say whether people may still have to sell their homes to pay for care, arguing: ‘I can’t predict individual situations.’

Sally Warren, the policy director at the King’s Fund health think tank, criticised the change that was ‘sprung upon MPs with very little notice and with no impact assessment made available’.

‘The change to the social care cap is a regressive step that will leave people with low levels of wealth still exposed to very high care costs,’ she said. 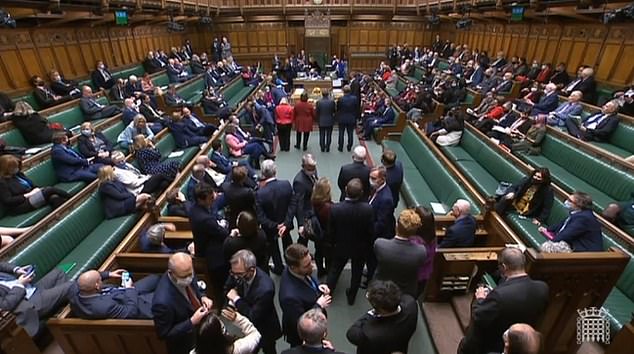 The amendment squeezed past by 272 votes to 246, with the 26 margin far smaller than the PM’s working majority of around 80 MPs

‘It is likely to mean that some people with moderate assets living in poorer areas will still be forced to sell their home to pay for their care, while wealthier people from richer parts of the country will be protected from this.’

‘Instead they voted to tax ordinary working people, while the wealthiest in our country are unaffected,’ the Labour MP said.

MPs have another opportunity to debate the amended Health and Care Bill on Tuesday before it is expected to receive extended scrutiny in the House of Lords.