Jakarta: An explosion has occurred at Indonesia's National Monument park, near the presidential palace in central Jakarta, according to Indonesia's national police.

The National Monument, commonly known as Monas, is near major government offices in the capital including the Home Affairs ministry. Access to the area is now sealed off. 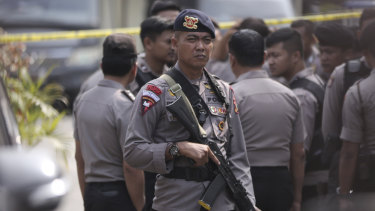 A police officer stands guard near the site of a bombing attack in Sumatra, Indonesia, last month.Credit:AP

A reporter on the scene for Kompas TV said that so far two army officers had been identified as victims who had been injured in the explosion.

The cause of the explosion, including whether it was a terrorist attack, is not yet clear. The bomb squad and police dog are scouring the area.