Ocean City, New Jersey: As Suzanne Hornick gazes out at the Atlantic Ocean, she sees trouble on the horizon.

Hornick lives in Ocean City, a beachside town in New Jersey that markets itself as a family-friendly alternative to the nearby gambling hot spot of Atlantic City. Alcohol sales are banned in the conservative community, as are casinos.

“This is the type of place where the biggest crime is bike theft,” Hornick says. “It’s a quaint little community we cherish so much.” 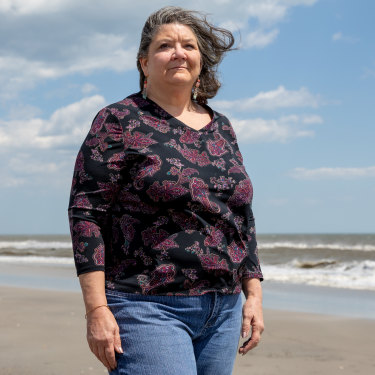 If Danish power company Orsted gets its way, Ocean City will soon also be home to America’s biggest offshore wind farm. The developer wants to position almost 100 wind turbines 24 kilometres off the coast of southern New Jersey, providing enough power for over half a million homes.

According to Orsted’s digitally-created images, the turbines will barely be visible from the shoreline. But Hornick believes that, on a clear day, they will create an eyesore that will repel tourists and depress property prices. Some fisherman fear the turbines will affect the migratory patterns of flounder and rockfish.

“Nobody is going to want to come and sit on our beach and look at these god-awful things,” says Hornick, a member of the local Save our Shoreline group. “Foreign corporations are coming in and taking away the only things we have to offer the world, which is tourism and fishing.”

Similar battles are playing out up and down the US east coast, where a slew of major offshore wind projects are set to come online by the middle of the decade.

State leaders such as New Jersey’s Democratic Governor Phil Murphy see offshore wind farms as an opportunity to create manufacturing jobs and tackle climate change. On the other side of the debate, anxious residents fear their local economies will suffer for little benefit. 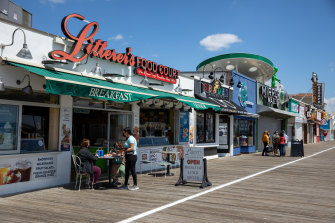 Like in Australia – which has no operational offshore wind farms – the sector has been virtually non-existent in America. The US only has two small pilot offshore wind farms, one in Rhode Island and another in Virginia. Together they generate a meagre 42 megawatts (MW) of power – a fraction of the 10,500 MW deployed in the United Kingdom.

Offshore wind now accounts for 14 per cent of the energy mix in the UK and makes a significant contribution in countries such as Denmark, Germany and the Netherlands.

In the US, however, proposals for major offshore wind farms have run into regulatory hurdles and fierce opposition.

A proposal for the nation’s first offshore wind farm, known as Cape Wind, was announced in 2001. The project envisioned 130 turbines off the Massachusetts coast and would have provided enough electricity to offset the consumption of 113 million gallons of oil a year.

The project, which finally collapsed in 2017, epitomised the broader US offshore wind industry: a sector bursting with potential that never managed to get off the ground.

But now, after decades of disappointment and delay, the industry appears ready for take-off.

There are currently 27 offshore wind farm projects in various stages of planning and development in the US, according to the Environment America Research and Policy Centre.

Almost all the activity is centred off the eastern seaboard, seen as ideal for offshore wind because of its powerful gusts, shallow ocean shelf and large coastal population centres.

Connecticut, Maryland, Massachusetts, New Jersey, New York, and Virginia have committed to buy at least 25,000 MW of offshore electricity by 2035, according to the American Clean Power Association.

Erin Baker, an expert in offshore wind at University of Massachusetts, Amherst, says: “I feel like we are at a tipping point.” 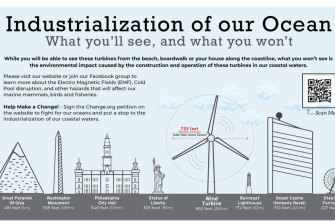 A poster, by the Save our Shoreline group, opposing the proposed offshore wind farm in New Jersey.

Gabriel Martinez, a spokesman for Orsted, says Ocean Wind will create 1000 jobs during the construction phase and 69 permanent jobs based in Atlantic City.

He points to an academic study that found holiday home rentals increased by 20 per cent after the opening of the small wind farm off Rhode Island thanks to “curiosity tourists” eager to check out the project.

But Jody Levchuk, a council member who owns several businesses on the Ocean City board walk, says he sees little upside for his community. He estimates eight in 10 residents and business owners are opposed to the project.

“The reason people come here is the serenity of the beach and that visual serenity will be destroyed,” he says. “There’s got to be somewhere else to put them.” 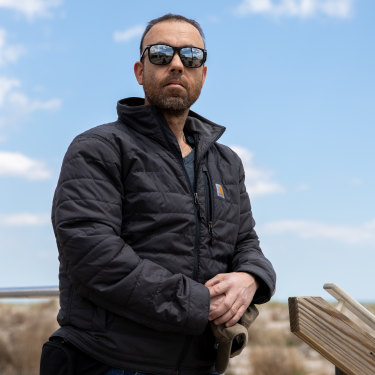 Jody Levchuk, who owns several businesses on the board walk at Ocean City, is worried about the impact on tourism. Credit:Amanda Andrade-Rhoades

Ocean Wind’s opponents stress they are not climate deniers, nor are they nearly as wealthy as the Kennedys and Kochs. They say they’d be happy to cover the town’s rooftops with solar panels but bristle at the disruption the offshore wind farm would cause, including the laying of transmission cables under their streets.

“Not since the introduction of gaming in Atlantic City in the 1970s have we seen the creation of such a significant economic driver for south Jersey,” she says.

As well as the wind farm, New Jersey will be home to a factory manufacturing monopiles (the steel towers wind turbines sit upon) and an offshore wind port where components will be assembled before being towed out to sea. The two projects will create an estimated 2000 permanent jobs.

While past projects ended up stalling, Asselta has no doubt Ocean Wind will soon rise on the Jersey coastline. It’s up to the federal government, not the local council, to approve the proposal.

“This is happening,” she says. “There’s fear of the unknown and concern about property values but once the wind farms are up and operational I think it will be much ado about nothing.”

What in the World

A note direct from our foreign correspondents about what’s making headlines around the world. Sign up for our weekly newsletter here.