Every year, I have a phone notification set for the day bookings open for beach huts in North Devon, where I live, so I can be sure to get the one I want.

When I started renting nearly 20 years ago, you could just rock up on the day. Now, you have to be up with the lark — just like those in Dorset this week who queued for more than 24 hours to secure a mini des res.

But don’t expect to relax once you’ve secured your chosen one. I’m already sourcing accessories to make my summer statement — a cashmere blanket, vintage picnic baskets, a retro cocktail shaker.

A beach hut used to be a glorified shed. At most it would harbour a few deck chairs and perhaps a portable stove. They were practical, one step up from a tent. Now, huts, which can sell for well into six figures, have become the ultimate status symbol.

They have become an inspiration for the Instagram generation and the hashtags #beachhutlife and #beachhutstyle throw up imaginative seaside interiors.

As the author of five best-selling Beach Hut series novels, and a judge for the Beach Hut of the Year awards, I’ve seen all manner of marvellous interiors.

Traditionalists stick to a blue-and-white colour scheme with nautical accessories — ropes and seashells — but the world is now your oyster when it comes to expressing yourself. Red polka dots, pops of neon and ice-cream pastels are all the rage.

I’ve seen Smeg fridges and gas barbecues the size, and price, of a car. As for picnics, you can’t just bring sausages wrapped in foil — you need a trendy tiffin tin. And forget squash and cans of lager. It’s themed cocktails and artisanal ale.

Gone are the days of flopping onto a car rug with an ice cream. Your entire holiday could be dedicated to making sure you’re Insta-ready, down to the last cocktail umbrella. There’s no rest for the wickedly hip! 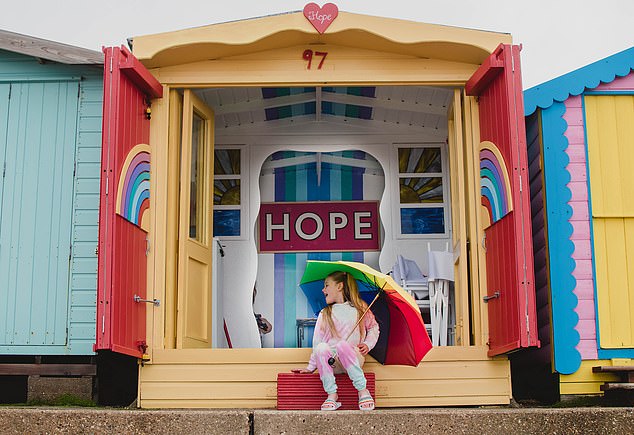 A TOUCH OF HOPE: Painted in red with a rainbow across the doors, Hope brings a splash of colour to any beach day. Vicky Gunn added Hope to her ‘Millie’s Beach Huts’ stable in 2016, but gave her a makeover last year. ‘There are no mod cons, no WiFi,’ laughs Vicky, from Essex. ‘But I have better crockery here than at home. Lots of people found beach huts recently and expect a high standard; they want good Instagram photos.’ (millies beachhuts.co.uk). Worth: £50,000 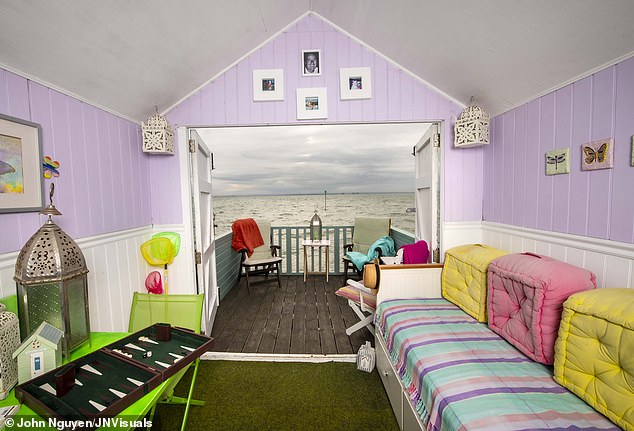 BUILD ME UP, BUTTERCUP:  Nikki Devereux’s beach hut has been part of the family since 1999, when Mike, who was best man at her wedding, bought it. She and her three kids loved visiting it and, when he died, Mike left the 20ft-by-8ft hut to them. Nikki, 60, has transformed the hut, named Buttercup, in Southend-on-Sea, Essex. ‘Mike had kept it very basic but I’ve turned it into a bright, colourful, cosy bolthole,’ says Nikki, who works as a celebrant. The hut includes a large terrace and a kitchen area with a stove/oven fuelled from a gas bottle. Worth: £80,000 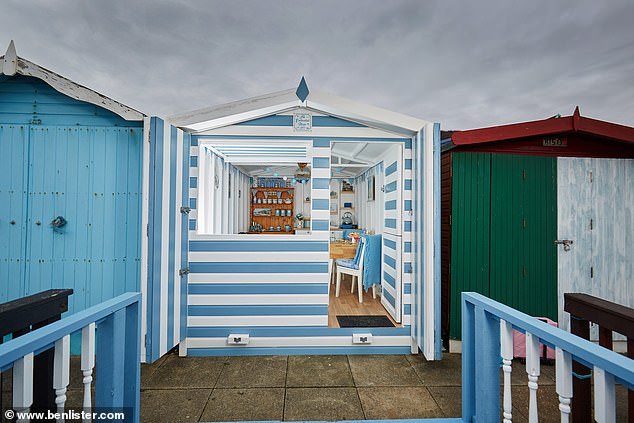 AN ENCHANTED PLACE TO BE: For years, Caroline Petherbridge dreamt of owning a beach hut. But the married mother-of-two feared the cost would be too much. However, last May the 51- year-old took the plunge. Among the £40,000 huts she saw a 1960s flat-roof hut — measuring 8ft by 12ft — at Walton-on-the-Naze, Essex, for £28,000 as it needed renovating. Together with friends, she bought the hut. ‘We spent the summer using it and then knocked it down to build a new one, which cost £5,000,’ Caroline explains. ‘It’s named The Enchanted Place, a nod to the Winnie-the-Pooh books. I ­furnished it for just £300’. Worth: £28,000 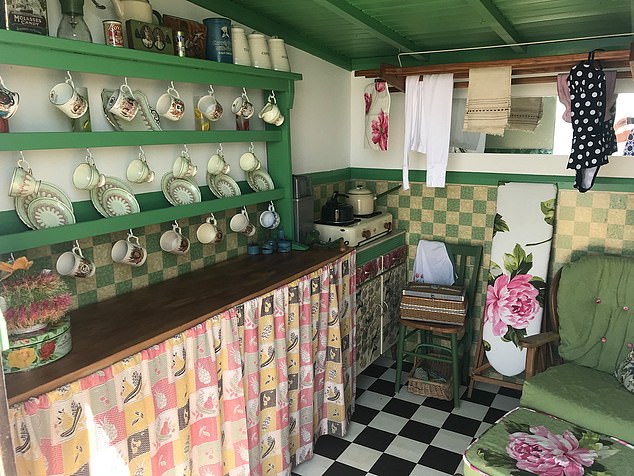 RETRO HEAVEN: Beach huts have a timeless appeal, but this one in Barton-onSea in the New Forest has gone back to the 1940s. Owner Melanie Swain turned this hut into a retro hideaway, inspired by her late grandparents. The hut is stacked with 1940s furnishings, down to original wallpaper. Glass doors have replaced the front door to highlight the view. ‘The hut has a calming feel,’ says Melanie. ‘It’s a hug in a deckchair’. Worth: £35,000 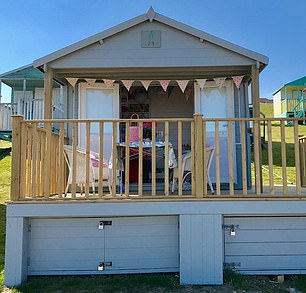 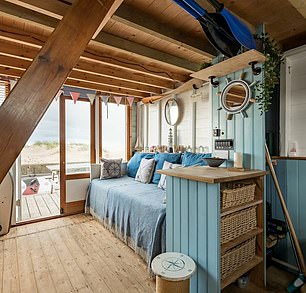 BANG FOR YOUR BUCK: Mudeford Spit in Christchurch Harbour, Dorset, holds the title for housing the most expensive beach huts in Britain. This one, bought for £333,000 in 2017 and now worth an estimated £500,000, is available to rent via Airbnb and is unusual among beach huts as it allows overnight stays. This hut has solar power and a fridge. Toilet and shower facilities require a walk, but there is a water butt, which at £339-a-night at peak season is the least you’d hope for 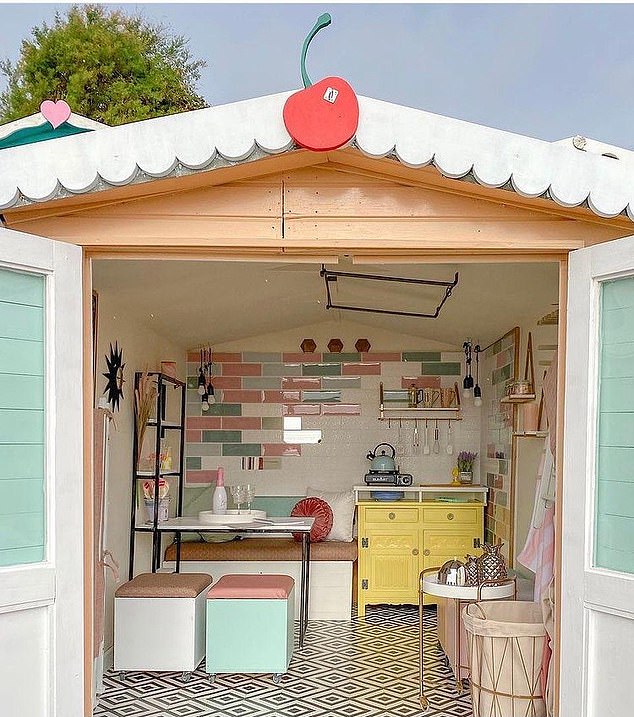 MAKING STYLE WAVES: Metro-tiled walls and geometric flooring are not interior design features you associate with your average beach hut. Named Hermione by owner Tamasin Curtis, the hut in Walton-on-the-Naze , Essex , features mirrored tiles that reflect the sea when you sit at the table, the floor is actually linoleum, and the crockery is by Emma Bridgewater (magical daybeachhuts.co.uk). Worth: £50,000 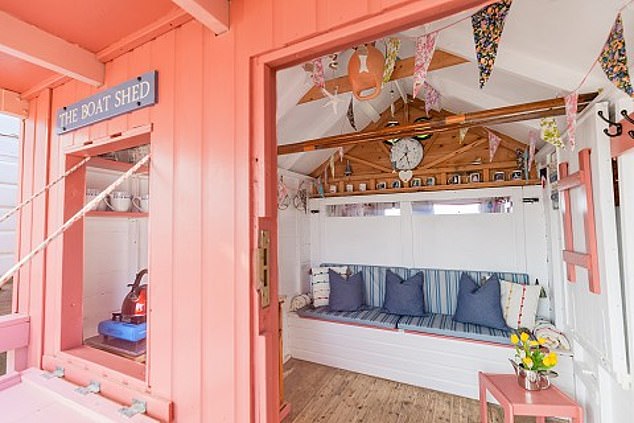 THE HAPPY HUT HIDEAWAY: ‘In 2007 my grandad, Thomas, paid £15,000 for a hut on our local beach,’ says Jodie GrangerBrown, from Wells-next-the-Sea in Norfolk. ‘I remember Mum was mortified he’d spent so much on a ‘shed’. But it’s now worth £95,000.’ In 2013, when Thomas died, he left the 7ft-by 10ft-hut — named The Happy Hut — to Jodie, now 25, her mum and brothers. It sparked a business venture and, in 2020, Jodie and her mum co-founded their rental business The Happy Huts, buying a second hut last year for £50,000, which has risen in value by almost 50 per cent. They also manage rentals for 17 other huts. Though they lack electricity and running water, all are gorgeous, from The Boat Shed (pictured) to The Bear Hut. It costs £600 to repaint each hut every two years, while interiors can cost £3,000 (thehappyhuts.co.uk). Worth: £95,000 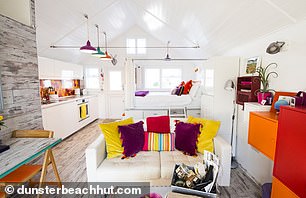 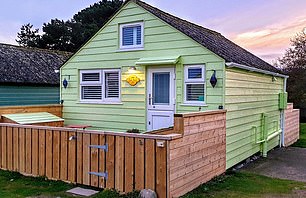 THE BIGGER THE BETTER! : If a bijou resting place for a day isn’t enough, there’s always the option to go for something a little larger that caters to overnight guests. This carnival-coloured affair in Dunster Beach, Somerset, calls itself a beach hut but is slicker than some houses, with a range of mod-cons — under-floor heating, dishwasher, wi-fi and ensuite shower. It’s available to rent for £675 a week in peak season. But be warned, 2022 is already fully booked (dunsterbeachhut.com). Worth: £160,000 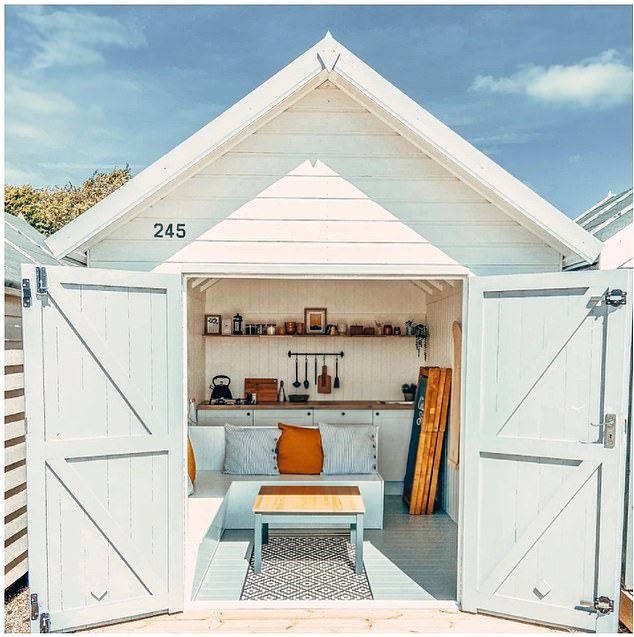 COOL ON THE COAST: On a sun-bleached day it’s hard to know what looks more inviting, the sea or the cool interior of this beach beauty in West Mersea, Essex. The cushion-laden L-shaped seating, conceals lots of handy storage — perfect for seaside paraphernalia. ‘I wanted it to look all white, easy breezy and contemporary,’ says Jo Lowery, who bought the hut for £35,000 in 2019, but which has since soared in value. You can rent it for £8 5-a-day. (cool coastalhuts.co.uk). Worth: £60,000 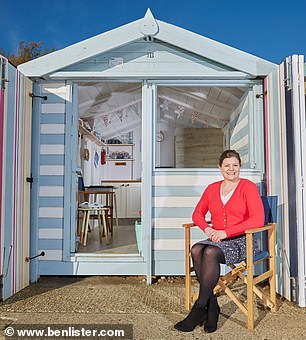 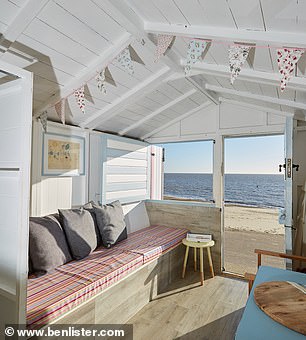 LOVED BACK TO LIFE: When Carla Edwards and her husband Phil spotted a beach hut for sale near their home in Wivenhoe, Essex, in 2019, Phil, 40, was determined to land the coveted cabin. Graphic designer Carla, 39, was rather more circumspect – not surprising given the price tag. ‘My response was, ‘No way, it’s nothing more than a shed!’,’ she recalls. ‘But he wouldn’t let it drop.’ A few weeks later they bought the 8ft by 12ft hut, adding the £18,000 purchase price to their mortgage (although the hut has since grown in value £60,000). However, the financial outlay didn’t end there. ‘The previous owners hadn’t used it for several years but we’ve loved it back to life, spending around £2,000 to install a proper changing room inside for privacy and a lovely seating area next to the kitchenette – which includes a stove, kettle and washing up bowl,’ says mum-of-two Carla. ‘The stripy outside took me hours to paint!’. (beachhuthirehollandonsea.co.uk). Worth: £60,000 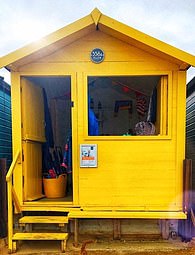 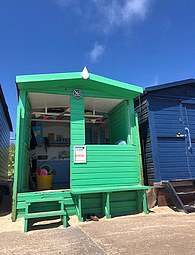 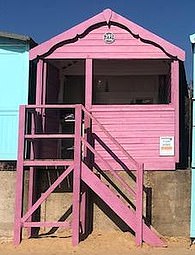 QUEEN OF HUTS: When former charity CEO Sarah Stimson and her husband decided it would be prudent to invest in properly, they initially had something bigger in mind. However, the 47-year-old mother-of-two from Walton-on-the-Naze soon discovered that the return on beach huts was far better. They bought one 3m by 2.25m hut for their personal use, and two to rent, costing between £16,000 and £20,000. However, they’ve since more than doubled in value. ‘We named each hut after women in our family who’ve died, explains Sarah. ‘Our green hut is called Queenie after my late grandmother.’ Painted in striking, bright colours, the huts are similarly jolly inside and kitted out with a table, six chairs and a gas stove for cooking. (waltononthenazebeachhuts.com). Worth: £40,000 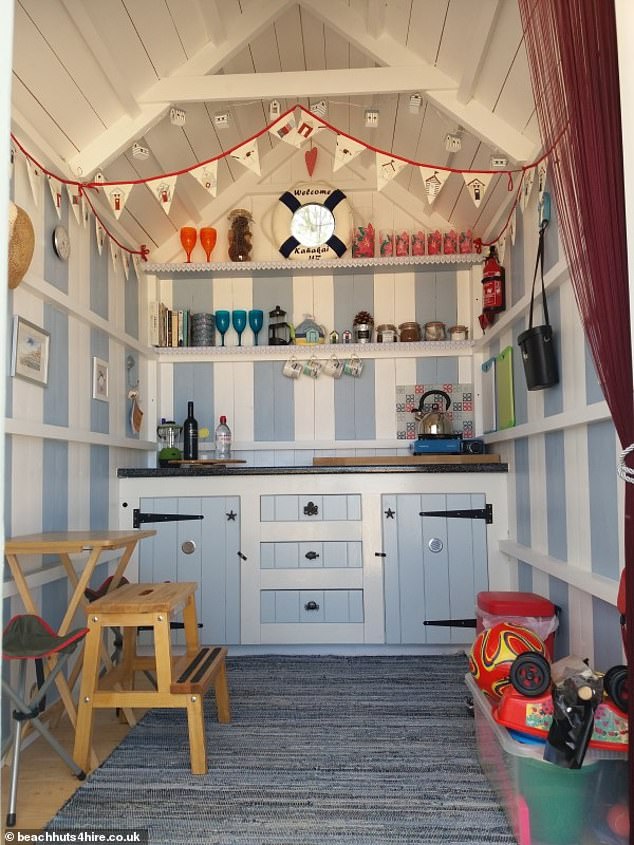 £90,000: ARTY ESCAPE: The beautiful beach huts at Wells are in high demand and sit on stilts, perched high on the sand dunes. This one, named Kahakai Hu, has a nautical flavour, with original art on the walls. Owner Michael Wilder and his wife Ali bought it for £62,000 three days before the lockdown of March 2020, and since renovating it the value has rocketed. There’s no power, no water and it’s a stroll to find a loo – but renting for a week in summer will set you back £330. (beachhuts.com)