An Australian academic has been savaged as “unethical” for citing an anonymous report containing factual errors, which she said “debunked” claims China is committing genocide.

Professor Jane Golley, who runs the Australian National University’s Centre for China, caused a storm among Sino-watchers when she used an address to the National Press Club last week to refer to an anonymous document to say the estimated figure of 1 million Uighur Muslims who have been through reeducation camps was probably exaggerated. 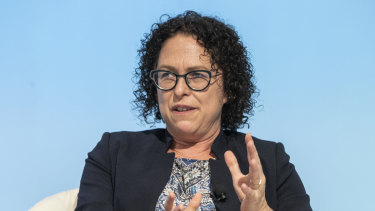 Professor Jane Golley said she has peer-reviewed many papers and the anonymous “well-written” research made sense to her. Credit:Louie Douvis

The paper, seen by this masthead, also claimed findings of forced sterilisations were in fact “family planning”.

The anonymous 18-page document took aim at work by Australia’s Strategic Policy Institute but primarily focussed on the work by German academic Dr Adrian Zenz, a senior fellow in China Studies at the Victims of Communism Memorial Foundation who was recently sanctioned by China.

Zenz’s most influential work has been using Chinese government documents to prove the construction of the camps the Chinese used to intern Uighurs in Xinjiang – camps Beijing only stopped denying the existence of after Zenz’s work caught global attention.

His successor in the Biden Administration, Antony Blinken, immediately endorsed the designation. The parliaments of Britain, Canada and the Netherlands have also recently voted to declare China is conducting genocide against the Uighurs.

Zenz said the paper would “struggle to get a pass mark as an undergraduate assignment” as it contained significant factual errors and appeared to be written by someone with no Chinese-language skills, leading to basic misinterpretations.

“Professor Golley has publicly endorsed a sub-par paper that constitutes a thinly-veiled attempt to discredit my work through a misleading and unprofessional discussion of my methodology,” he said.

“I am surprised that Golley fails to realise that this will reflect very poorly on her academic reputation.

“Worse, her endorsement effectively makes light of the full extent of the suffering of the Uighurs, which is clearly unethical,” he said. “The author’s lines of reasoning are often largely identical with counterpropaganda on Xinjiang published by Chinese state media.”

Professor Golley dug in but conceded she had made a mistake in saying the document debunked Zenz’s research.

“I wish I’d said ‘challenged’ instead of ‘debunked,’” she said in a 30-minute interview.

She said she had received the paper via a former Australian Ambassador to China, who she declined to name, and said she had consulted two other colleagues before going public.

“They all thought it was scholarly, it was well written and there were lots of footnotes nearly all in English,” she said of the report.

“So that’s where I used my academic judgement, I’ve spent my whole life peer-reviewing articles. I read it and thought that there many points that make sense to me.

“I’m not saying I understand Xinjiang perfectly but if I read an article that makes sense to me why aren’t I allowed to raise that?”

She said she raised the report to counter the prevailing media narrative in Australia surrounding Chinese relations.

Professor Golley said she still did not know the authors of the paper but defended their right to submit the paper to her anonymously via proxies saying they would be “persecuted” if exposed.

“When the names come out there will be some Chinese names in the list and people will immediately assume that they’ve been subjected to Beijing’s orders when it might be the case that that’s just how they see the world and then they’ll be persecuted – they’re going to be labelled spies.”

Australia’s intelligence agencies have warned that China is operating foreign interference campaigns trying to quell criticism of Beijing on Australian campuses, via academics and the Chinese student population, prompting a government inquiry into the issue.

Last year ANU was the victim of a massive data hack, with China considered the culprit.

But Golley said she had seen little evidence of any foreign interference at the ANU. “There’s some evidence of it, we don’t know how widespread it is,” she said. “This is another example of needing to be very clear-eyed about the facts.”

She said she had never been paid a single cent by the Chinese Communist Party but that had failed to stem an avalanche of “hate mail” “close to death threats” telling her to “f— off, you communist spy,” and calling her a “shill” for China.

“I feel so misjudged, if people knew me, I just want the best for the Uighurs,” she said.

She said her motivation for presenting the paper was a concern that academic freedom is being stifled in Australia but she is also concerned that exaggerating China’s human rights abuses could backfire if it emerged they were overstated.

She also urged Australians to consider its own genocidal past against Indigenous Australians, saying while it did not justify abuses in Xinjiang it was not “completely irrelevant either”.

“Sovereignty was never ceded,” she said of the British settlement of Australia as a penal colony in the late 1700s. “I’m revolted that the Australian War Memorial doesn’t have any memorial for the Frontier Wars.”